For almost two decades, women from communities along the Limpopo River in Mozambique have been working to restore the mangroves destroyed by cyclones and floods. Photo by Dianne Tipping-Woods

On the mudflats close to the town of Xai-Xai, Mozambique, where Africa’s mighty Limpopo River meets the Indian Ocean, 93-year-old Salimina João Mahiele joins about 100 women—mainly subsistence farmers from the nearby Mahielene and Zongoene Sede communities—to plant mangroves. They gather around Agostinho Nhanzimo, who helps run the local mangrove nursery established for this restoration project, as he explains how to space the young plants he has cultivated and how deep the holes should be.

Although it is early in the day, the sun is hot as the women disperse, laden with plastic tubs of young plants on their heads. Smaller propagules—the baby plants—nestle in damp cloths bundled under their arms. These won’t be planted but will be left where the tide will reach them. After a few days floating in the water, they will become waterlogged and sink, lodging in the muddy soil, and, hopefully, taking root. It is hard, physical work, but these women will get paid a small amount of cash now, and later they will get the wood and food that mature mangroves provide. 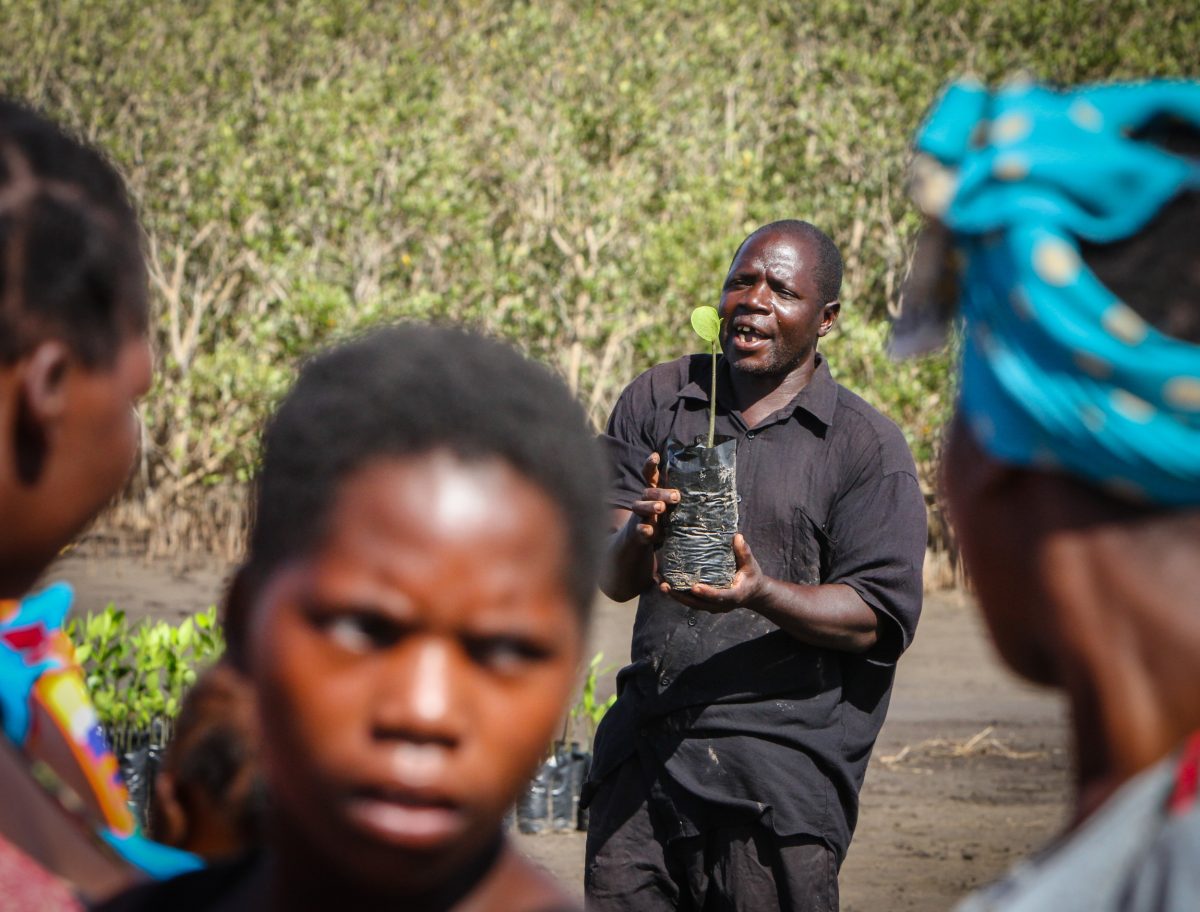 Mahiele, the village’s matriarch, walks barefoot among the women, encouraging them in their work. Many have babies strapped to their backs in slings made of bright-colored cloths called capulanas. Some wade through glutinous mud and shallow water, while others rhythmically dig holes in the firm clay farther from the waterline with the same hand-forged hoes used to till their fields. Unlike manioc or groundnuts, common annual crops grown on the floodplains around the estuary, mangroves are hard to establish. They take years to mature, perhaps as long as 25, and have less immediate benefits than food crops, but “people here know that if they recover, we will have more resources to use, like fish and crabs,” says Mahiele. Women in Mozambique are traditionally responsible for most agricultural work, making them essential stakeholders in a long-term project to re-establish mangrove forests here, where the Limpopo ends its approximately 1,750-kilometer transnational journey through Botswana, Zimbabwe, South Africa, and Mozambique. Their commitment is unrelenting, as restored mangrove forests provide them with more fish and crabs, and the trees help protect their riverside croplands from damaging saltwater intrusion.

The project had its start over two decades ago. In 2000, a major flood caused by Tropical Cyclone Eline destroyed about 50 percent of the mangrove forest around the estuary after Mozambique experienced five weeks of intense rainfall. As the river widened from around 200 meters to several kilometers, the water destroyed homes, fields, and livelihoods. Some areas were submerged for up to 45 days, causing severe degradation, uprooting, and dieback of almost 5.5 square kilometers of mangroves. 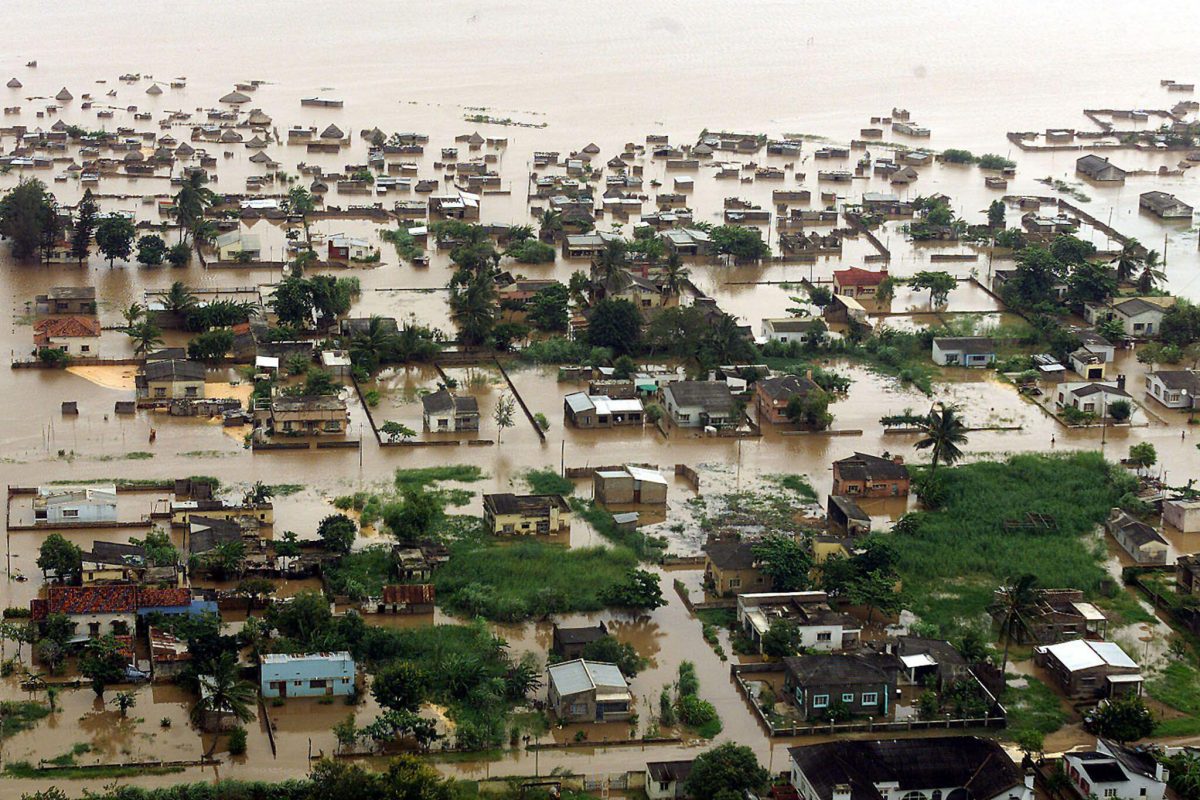 In 2000, severe flooding in the wake of Tropical Cyclone Eline destroyed homes and businesses, flooded prime agricultural lands, and decimated over half of the mangrove forest near Xai-Xai. The flood also left over 50 people dead and severely impacted health and food security. Photo by Juda Ngwenya/Reuters/Alamy Stock Photo

The arable floodplains where women traditionally cultivate subsistence crops—such as manioc, groundnuts, rice, and bananas—on machambas (plots of land) around the estuary were also flooded for more than a month. The community was left without crops. The flooding also cut off access to the mangroves, a critical source of wild foods—including small fish, mollusks, crustaceans, and the succulent herb sea purslane—and other resources including mangrove wood, which is used for firewood and construction. The flooding meant the villagers had to buy these critical items or walk longer to harvest them.

In the flood’s aftermath, people died of starvation, malnourishment, and illnesses such as malaria, but the disaster also affected longer-term food security. “The more salt water intrudes inland, the harder it is to grow crops on the floodplains, and the greater the threat to groundwater quality,” says aquatic biologist and coastal ecosystems specialist Henriques Jacinto Balidy, who, until recently, worked for Mozambique’s National Agency for Environmental Quality Control (AQUA) and helped coordinate ongoing restoration efforts in this area. AQUA, which falls under Mozambique’s Ministry of Land and Environment, initiated the mangrove restoration work in 2007 after meetings with the natural resource committees from affected villages and various nonprofit and academic partners. While there have been various funders over the years, and cash influxes can be irregular, current mangrove restoration efforts are being financed through the Nairobi Convention as part of the United Nations Environment Programme’s Regional Seas initiative.

The project initially linked healthy mangroves with machamba productivity and food security to get the community involved in the restoration work, but the partners were also motivated by the less-tangible benefits mangroves provide. Their intricate root systems absorb wave impacts and stabilize soils as sand and silt particles build up around them, reducing erosion and capturing nutrients from runoff that might otherwise cause harmful algal blooms offshore. This keeps seawater clean for coral reefs and seagrass beds. They’re also excellent at absorbing and storing atmospheric carbon. (Although mangroves make up less than two percent of marine environments globally, they still account for 10 to 15 percent of carbon burial, fixing up to an estimated 17 tonnes of carbon per hectare per year.) 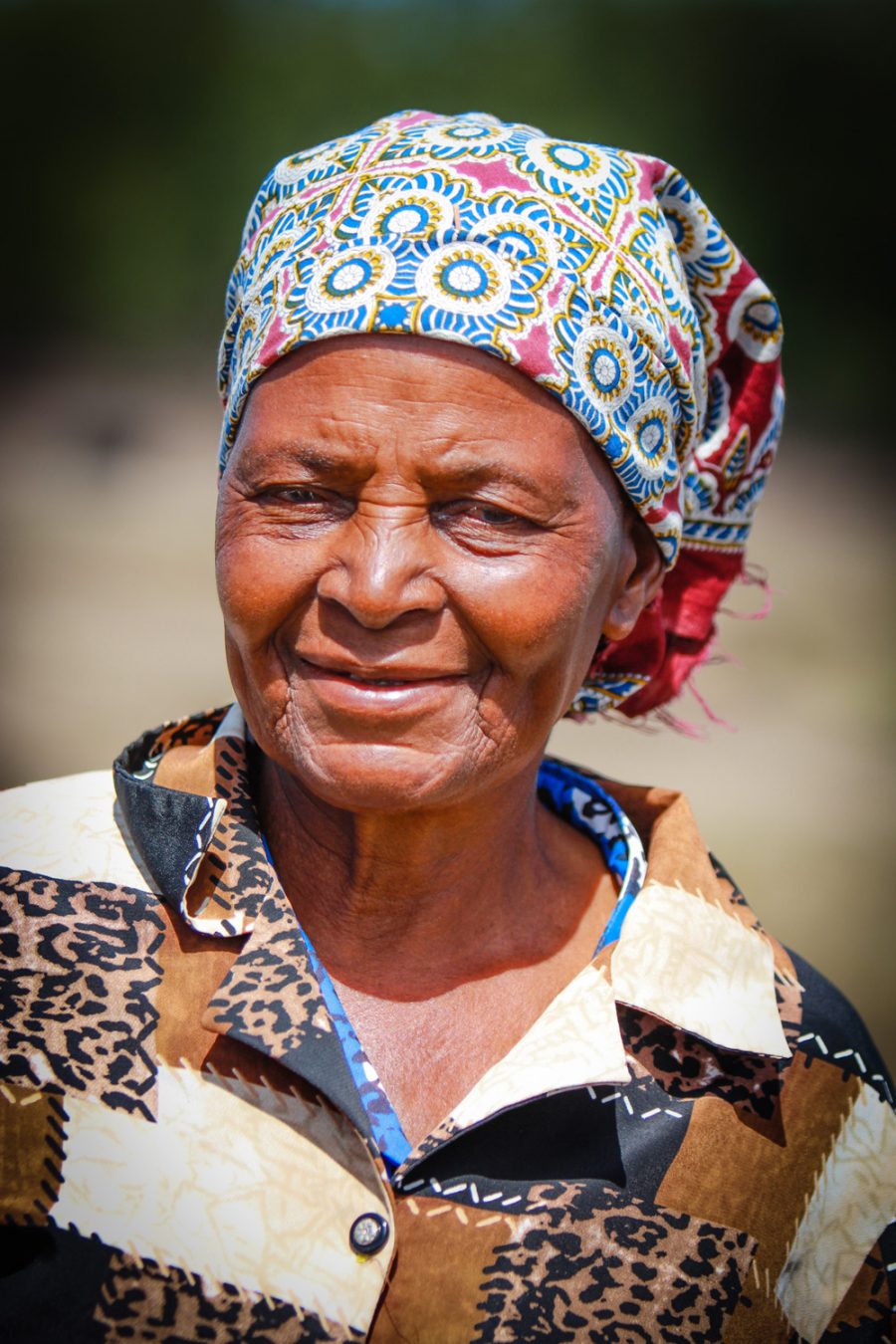 Salimina João Mahiele, age 93 and a Xai-Xai matriarch, works alongside women from her community as they plant mangroves in an effort to restore this critical coastal habitat that provides wood and food to their families.

The project started with mapping the surviving mangroves in order to provide baseline data for the restoration work in 2008. Then, about 60 community members from Mahielene village restored the channels to allow the natural ebbs and flows of the tide into the ecosystem. In 2010, community members helped establish the mangrove nursery Nhanzimo runs, where rows of baby mangroves—six native species—wait their turn to be returned to the estuary. It’s important to mix the species because they all have particular growing requirements, explains Nhanzimo.

He has several thousand young plants in the nursery at any one time and credits his success cultivating mangroves to situating the nursery where tides can naturally nourish the seedlings, stopping the soil from getting too dry or too salty.

Before the flood, the mangrove forests were already degraded by human activities, such as subsistence logging and land clearance for agriculture, and that’s partly why the cyclone’s effects were so devastating. Healthy mangrove forests can better withstand and even mitigate the effects of floods.

When Mahiele was a girl, she says the mangrove ecosystem around the estuary was a tangled, thriving web of life. During the country’s long civil war, from 1977 to 1992, the mangroves concealed those from her village who needed to hide. “The mangroves protected them, and people could live amongst them and survive,” she says. 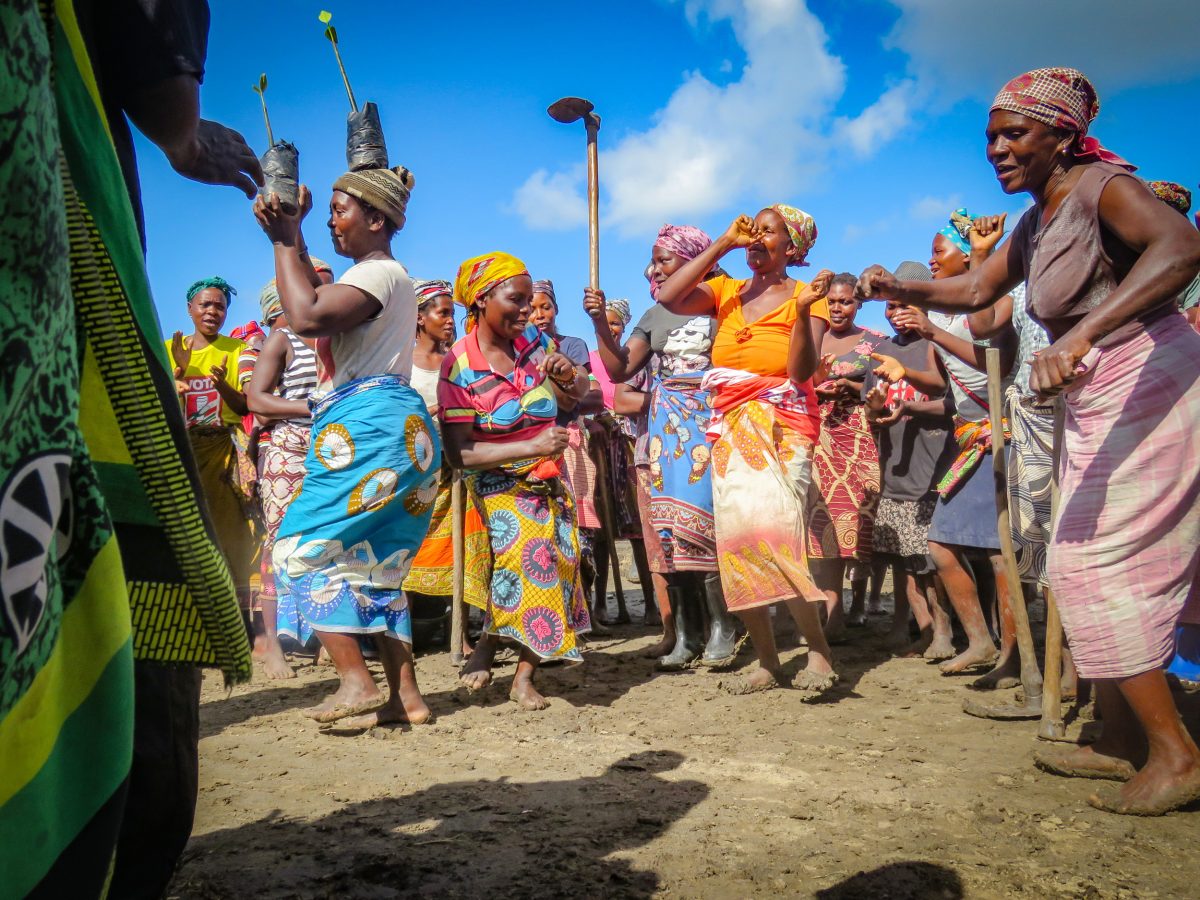 Xai-Xai women sing before heading to the mudflats to plant mangroves.

The forests Mahiele recalls would have been dominated by white mangroves, which grow up to 10 meters high, with smaller red mangroves growing in the muddier areas along channels and creeks. These were interspersed with other mangrove species and provided habitat for fish like mudskipper, goby, and the common silver biddy, as well as birds like the rare mangrove kingfisher, the African sacred ibis, the African fish eagle, and various egrets, storks, and herons.

It has taken over a decade of work, but the villagers have replanted about 125 hectares of mangroves since 2010. To reach pre–Tropical Cyclone Eline cover, they need to plant another 400 hectares. There have been constant setbacks and challenges over the years, first with crabs eating the young mangroves in the nursery, and then, in 2013, another flood killed all seedlings below a meter in height. According to Nhanzimo, the impacts were not as severe as those of the 2000 floods, and the better-established mangroves—those that are about 10 years old—weathered that storm.

Progress is also slow because life in this part of Mozambique “is still very hard,” says Mahiele. Often, the only resources people have are their land and their labor. And mangrove planting is limited to mar viva, the spring tides when water entering the Limpopo estuary is at its highest, which gives newly planted seedlings their best chance of becoming established. 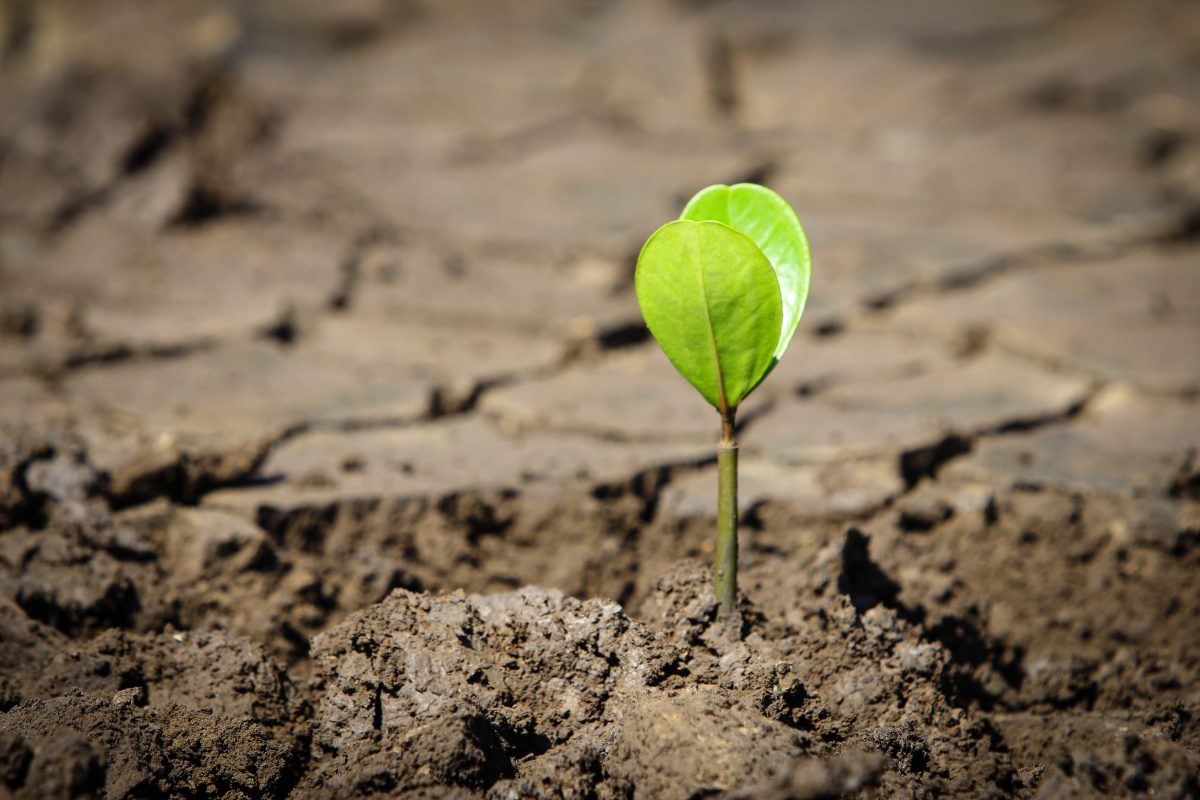 It can take 10 years or so before a mangrove plant becomes well established and less vulnerable to flooding and hungry crabs that eat young seedlings. As the mangroves mature, they provide habitat for crabs and shrimp, and they stabilize the nearby fields where many food crops are grown.

But the women here do not give up. Their goal is to restore mangrove cover to pre-2000 levels, regardless of how long that takes. Mangroves planted five to 10 years ago are now more than two meters high. Balidy confirms that crab and shrimp numbers have improved significantly, and fields around the estuary are again filled with groundnuts, manioc, maize, and other crops. Hectare by hectare, Mahiele and the women who live around the estuary are helping to rebuild the habitat that nurtures, sustains, and protects, using nature’s infrastructure—mangrove forests.