Farmer Abdul Majed was forced to switch from growing rice to raising shrimp after salt water intruded into his paddies in Khulna, Bangladesh. Photo by Orjan F. Ellingvag/Getty Images

This story was originally published by Yale Environment 360 and is reproduced here as part of the Climate Desk collaboration.

The Mekong Delta is under a chemical threat arguably more deadly for the long term than the Agent Orange deployed across it during the Vietnam War half a century ago. By the middle of this century, it could be engulfed by a toxic onslaught from which there is no recovery—salt.

As sea levels rise, salty ocean water is pushing ever farther into the delta, one of Southeast Asia’s most densely populated and productive rice-growing regions. During this year’s spring dry season, the salinity boundary—where salt levels exceed four grams per liter—reached up to 64 kilometers upstream, more than 16 kilometers farther than it has historically.

The saline influx is in part caused by faltering flows of fresh water coming down the Mekong River into the delta, as China fills giant hydroelectric dams far upstream. But a new and pioneering modeling study of the delta, which is home to more than 20 million people, has concluded that by around 2050, rising sea levels in the South China Sea will be the dominant driver of salinization, making wide areas uninhabitable for rice farmers long before they are inundated by the ocean itself.

Coauthor Piet Hoekstra, an expert on coastal dynamics at Utrecht University in the Netherlands, says the study is the first to combine a range of natural processes, from climate change and land subsidence to river and sediment flow, to predict the future of a major delta. “We think it will become a benchmark for other delta studies,” he says.

A lot will hang on the outcome of such studies. For the Mekong is one of dozens of large, fertile river deltas—many the breadbaskets of their national economies—that face similar salt invasions.

And climate change will drive salt scourges far from the ocean too, especially in arid regions, where climate scientists warn that higher temperatures will result in much faster rates of evaporation. This will combine with longer dry seasons and more pervasive droughts to desiccate continental interiors, raising the current trace levels of naturally occurring salt to concentrations where crops will die and freshwater ecosystems will collapse.

Among the vulnerable places are the Mediterranean countries of southern Europe, where temperatures are already rising faster than the global average and climate models predict a 25 to 30 percent decline in rainfall by 2080. Ecologist Erik Jeppesen of Aarhus University in Denmark recently reported that a coming buildup of salt in the region’s lakes, wetlands, and rivers poses “a major threat to the functioning and biodiversity of inland aquatic ecosystems.” Crops will die, too. And many underground water reserves on which the region’s half-billion people depend may become undrinkable, warns Micòl Mastrocicco, an expert on water pollution at the University of Campania Luigi Vanvitelli in Italy.

There is a surge in saltiness across all inhabited continents today. Climate change is far from the only cause. Deltas are left wide open to incursions of seawater by dams upstream, by pumps that remove fresh water from underground for faucets and irrigation, and by sand mines that lower riverbeds. And in dry regions, irrigation systems delivering water to crops bring salt onto fields, which is left behind in soils as the crops absorb the water. 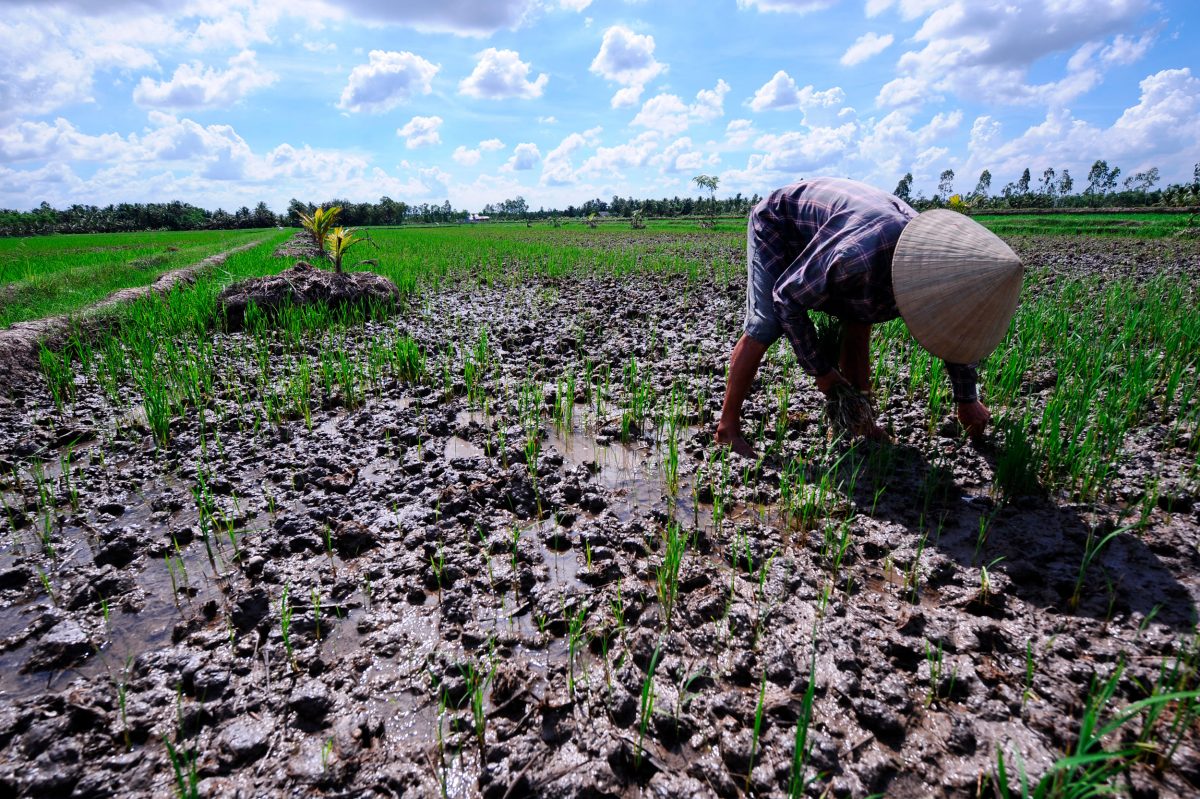 Humans also add salt directly to landscapes too, for instance by pouring saline drainage water from mines into rivers and by dosing roads with rock salt to prevent icing in winter. “In cold regions, road de-icing salts can be the major contributor to rising salinity of freshwater ecosystems,” says William Hintz, an ecologist at the University of Toledo in Ohio.

But in the Mekong, the Mediterranean, and elsewhere, there is growing concern that climate change is replacing these local factors as the dominant cause. “It will affect almost every human populated region around the globe,” says Hintz.

A 2020 modeling study using climate, soil, and hydrological data carried out by Amirhossein Hassani and colleagues at the University of Manchester in England and the Hamburg University of Technology in Germany pinpointed hotspots for climate change–induced salinization across wide areas of southern and western Australia, Mexico, South Africa, the US Southwest, and Brazil. Central India; the desert soils of Mongolia and northern China; and the Mediterranean countries of Spain, Morocco, and Algeria were not far behind.

The damage is likely to be so severe that salinization will become a major cause of environmental refugees, as people flee land that will no longer sustain them. Low-lying Pacific islands may become uninhabitable as their fresh water turns salty long before waves engulf them, the US Geological Survey has warned. In the giant delta of the rivers Ganges, Brahmaputra, and Meghna, which occupies much of Bangladesh, salinization is already a more important cause of migration than the much more heavily publicized exoduses from floods and other natural disasters, development economists Joyce Chen of Ohio State University and Valerie Mueller of Arizona State University wrote recently.

Of course, some ecosystems are adapted to saline environments. Many lakes and wetlands in arid regions are naturally salty. But even here, the desiccation caused by climate change is raising salinity and altering the balance between saline and fresh water, creating growing problems for ecosystems, lake fisheries, crop growing, and sometimes human health.

Hintz reported in February that salt has triggered a “massive loss of important zooplankton” in lakes in North America and Europe. This loss has a “cascading effect,” resulting in blooms of algae at almost half the sites studied. Once salt gets into wetlands, he says, it is “incredibly difficult to get out, even assuming you’ve stopped the source of salt pollution. It can persist for decades or longer, depending on how long the water in a lake or wetland sticks around.”

One-third of US rivers have become more salty in the past quarter century, according to an analysis by Sujay Kaushal, a biochemist at the University of Maryland, College Park. The highest salt levels are often downstream of mining areas—such as in the northern Great Plains—that discharge large volumes of saline water from underground into rivers, and in the irrigated regions of the Southwest, where salty drainage water concentrates in soils and rivers.

The Rio Grande has seen a fourfold increase in salinity, according to John Olson, a freshwater ecologist at California State University, Monterey Bay. In the Colorado River basin and California, salt buildup results in crop losses put at billions of dollars per year. De-icing salt alone, by one estimate, causes US $1,000 in structural damage, mostly through corrosion, for every ton spread onto roads and parking lots. 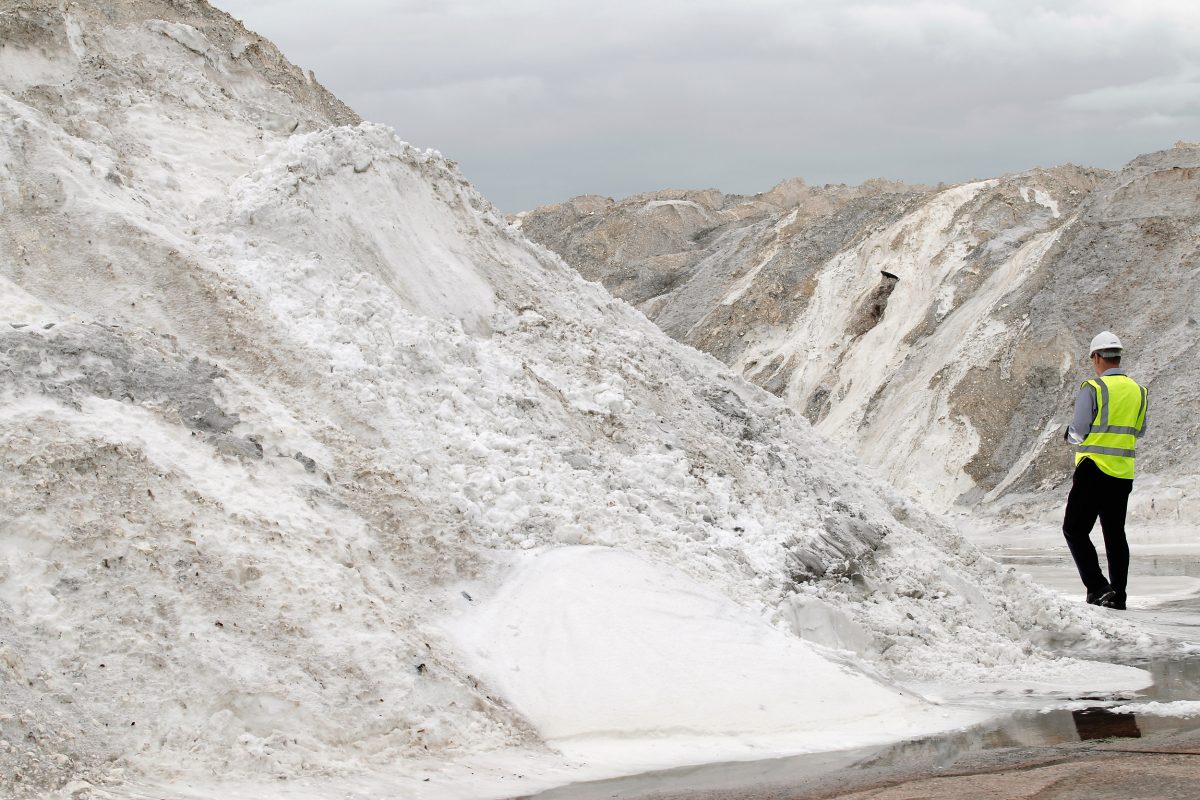 In Australia, more than two million hectares of farmland is damaged by salt, primarily in Western Australia and the heavily irrigated Murray-Darling basin, the country’s breadbasket in the east. This has an estimated economic impact of more than US $700-million per year. A growing part of the problem is a reduction in rainfall that is widely blamed on climate change, and leads to desiccation of the land. A federal government audit of the country’s drylands predicts a threefold increase in soil salinity by 2050.

But while economic impacts have sometimes been assessed, researchers admit they often don’t have a good handle on the gravity of the growing salt threat to freshwater ecosystems. A recent international analysis of published research, headed by David Cunillera-Montcusi, an aquatic ecologist at the University of Barcelona, in Spain, found that while there had been 93 studies of salinization of freshwater ecosystems and its causes in North America since 2017, there had been only five studies in all of Africa and six in South America.

Health problems too are seriously under-investigated. Salty drinking water is a major public health problem in many regions. It was water from a salty local river that mobilized lead in old water pipes, poisoning supplies in Flint, Michigan. Around the Aral Sea, a victim of decades of water abstraction for irrigating cotton in Central Asia, salty underground waters and salt-rich dust storms from the dried-up seabed have left the majority of the population suffering from anemia.

Mofizur Rahman, an environmental scientist currently at the Cologne University of Applied Sciences in Germany, says that in his native Bangladesh, high levels of salt, especially sodium, in water supplies are causing epidemics of preeclampsia and hypertension, which affects one in three women in parts of southwest Bangladesh. A 2015 study by Jacob Levi, then at Imperial College London in England, estimated that salty drinking water in coastal Bangladesh causes up to 10,000 deaths a year, a figure that climate change will dramatically increase.

As climate change gathers pace, salt will be a growing threat to the world’s food supplies, particularly where farmers rely on artificial irrigation. Water poured onto fields always contains some salt, eroded from mountains where the rivers rise. But when plants absorb the water, they leave the salt behind in the soil, where it eventually forms a white, toxic crust.

Around one-third of the world’s food is grown in irrigated fields, and one-fifth of those fields are reckoned to be salt-contaminated. Climate change will dramatically worsen this, researchers agree, because in a hotter, drier world, more crops will need more irrigation water, aggravating the buildup of salt.

In some places, farmers are leaving their lands. Saline intrusion in Bangladesh, as sea levels rise and storm surges from the Bay of Bengal become more intense, has reduced rice production by up to 30 percent in the past 15 years, according to Rahman. It is fueling an exodus of farmers to the country’s capital, Dhaka. 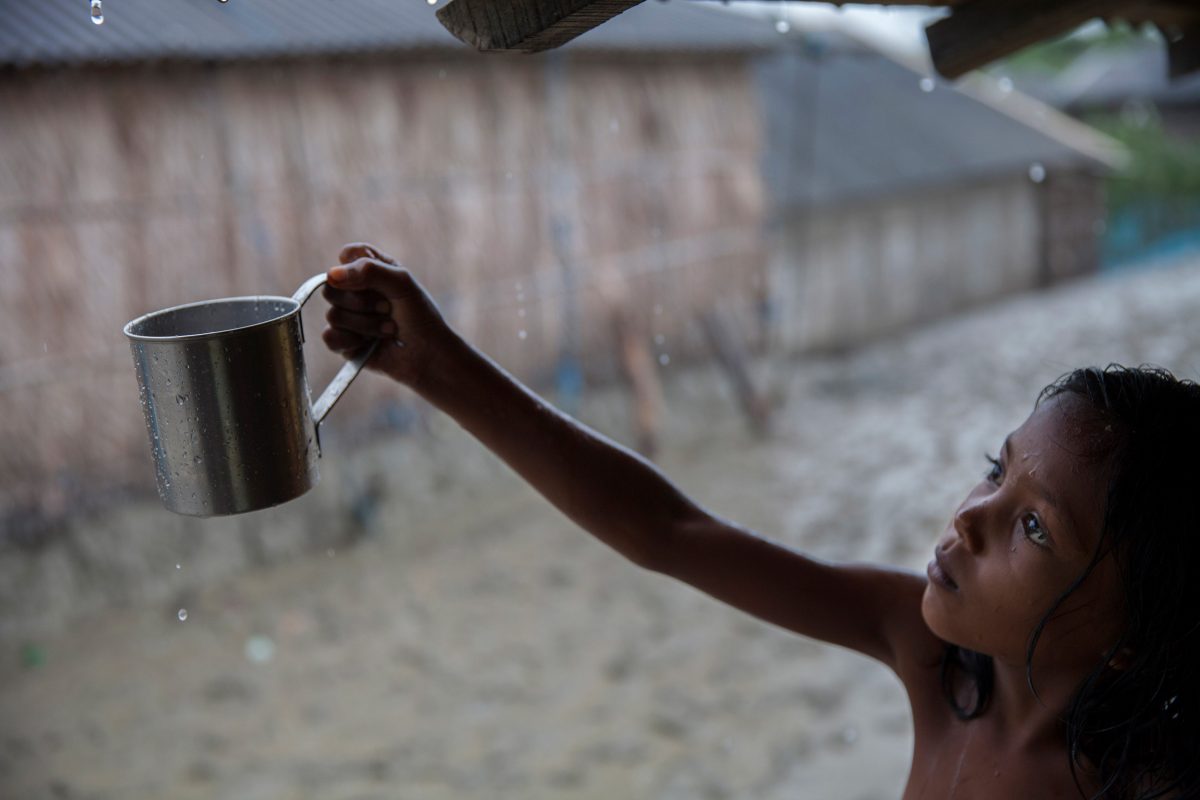 A girl collects rain, the main source of drinking water in Shyamnagar, Bangladesh, where waters are highly saline. Photo by Probal Rashid/Lightrocket via Getty Images

Similarly in Pakistan, saline waters have intruded more than 48 kilometers into the delta of the Indus River, forcing hundreds of thousands of people to depart for nearby Karachi. This has contributed to the influx of people into Dhaka and Karachi, which have, partly as a consequence, become two of the fastest growing megacities in the world, adding 11 million and 7 million to their populations, respectively, in the last two decades.

Other farmers try to adapt to saltier waters and soils. In both Bangladesh and the Mekong Delta, rice growers have switched to raising prawns in brackish ponds. But there are downsides to this adaptation strategy. The ponded water only adds to soil salinity in the surrounding areas, note Chen and Mueller.

Taking a different approach, plant breeders are working on more salt-tolerant crops, either by genetic engineering or by searching among existing crop varieties for those that are most tolerant of their salt. The Dutch aid agency Cordaid has been working with crop scientists and farmers to identify and plant varieties of carrots, potatoes, and cabbages that can grow in the increasingly saline soils of coastal Bangladesh.

But adaptation can only go so far. The salt has to be held back. In the United States, Hintz says, it is urgent to curb the spreading of de-icing salt onto roads. Controls of drainage from mines could often help, too. On many rivers round the world, including the Mekong, improved management of upstream dams could maintain river flows to deltas during the dry season when saline invasion from the ocean is most intense. And there is huge potential for better management of irrigation systems so they require less water and have drains to remove salt from soils.

But ultimately only a halt to climate change will be capable of ending the great salinization.