The surf break at San Miguel, in Todos Santos Bay, Baja California, Mexico, is part of a world surfing reserve. Its popular surf break was protected by preserving the land adjacent to the wave in Baja California’s first state park. Photo by Jesús Salazar/Save the Waves

Waves roar fiercely in San Miguel, a Mexican surf paradise located in Todos Santos Bay in the municipality of Ensenada, about 105 kilometers south of the Mexico-United States border. They break near shore, creating swaths of sea foam that flood the beach. Only experienced surfers enter this wild place. As if on cue, a lone surfer, a man who looks to be in his 40s, speeds forward on his surfboard through a perfect wave.

On the same beach, a small freshwater stream flows into the bay; snowy plovers forage for invertebrates where the ocean meets the stream. While it doesn’t look like much, this connection of stream and sea is key to the bay’s famous surf break. The San Miguel stream carries sand and cobblestones to the coast, explains marine biologist Gustavo Danemann, executive director of Pronatura Noroeste, a Mexican environmental organization. And that “has a direct influence over wave birth,” he says.

For years, though, this fragile bond has been threatened by illegal landfills and the extraction of sand and rock, as well as a proposed (but currently dormant) project to increase the port facilities of Ensenada. Any disturbance to the stream, oceanic currents, or the ocean floor would be detrimental to the quality of the waves, which are considered world class. 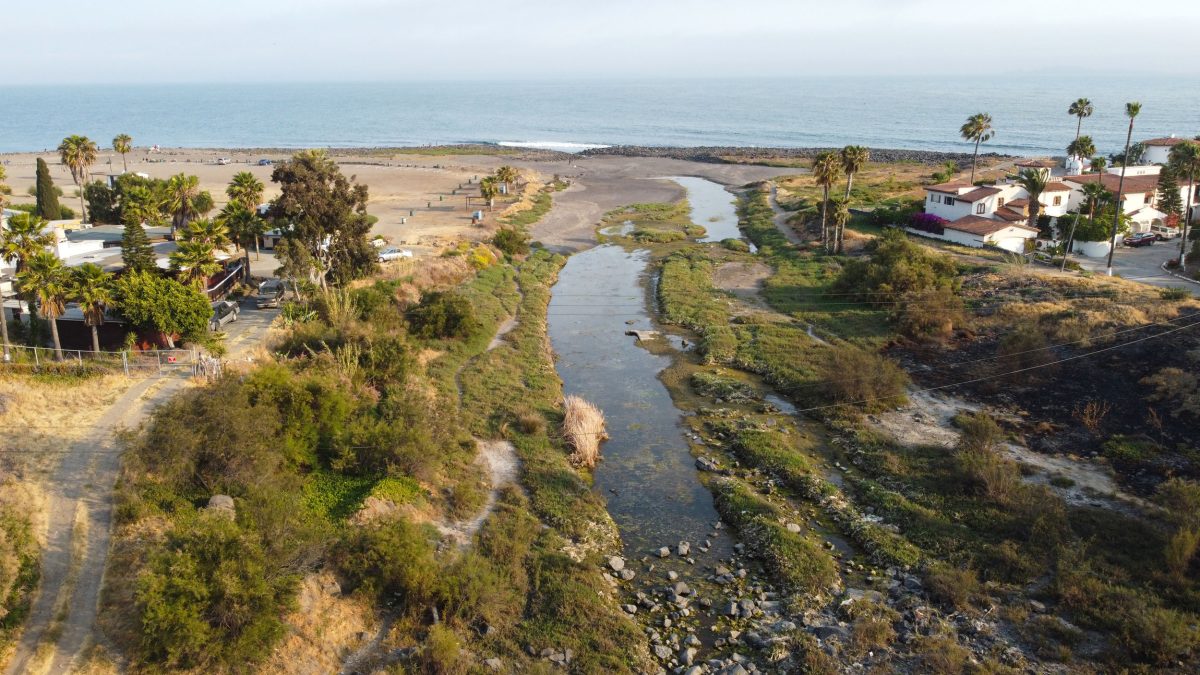 A small stream that runs to the beach at San Miguel in Baja California, Mexico, is part of the equation that results in a popular surf break. Photo by Jesús Salazar/Save the Waves

“Everything has an influence on the quality of the waves,” says Jesús Salazar, a local surfer and professional photographer who studied waves as part of his master’s degree. “Not only the unique geomorphology of the bay, but the bathymetry and swell corridors from both north and south that help create waves all year round.”

Born in Ensenada, a coastal municipality of about 440,000 people largely sustained by its port, fishing, and tourism, Salazar has, for years, been part of the region’s surf community and conservation movement. Surfing in Ensenada is primarily focused on San Miguel, a beach bordered by a residential community of 400 people and the birthplace of Mexico’s surf scene with its “perfect wave.”

Since the 1950s, when the first Californian surfers arrived, until today—with international tourists and new generations of Mexicans learning how to ride the ocean—the surf community has grown stronger, often joining to protect the area and their beloved waves from development. “We have lost waves in Todos Santos Bay next to streams due to coastal development. The construction of coastal protection infrastructure is especially lethal to waves,” says Salazar. Three breakwaters have been responsible for wave extinctions in Ensenada: two of them built to secure ports and a third constructed to protect a gas company.

San Miguel has been kept nearly untouched thanks to its relative distance from the city of Ensenada, about 16 kilometers south, but a port expansion or any new coastal development would easily endanger the waves. And that was too much of a risk for the tiny community of surfers and local families so attached to the sea and its waves. 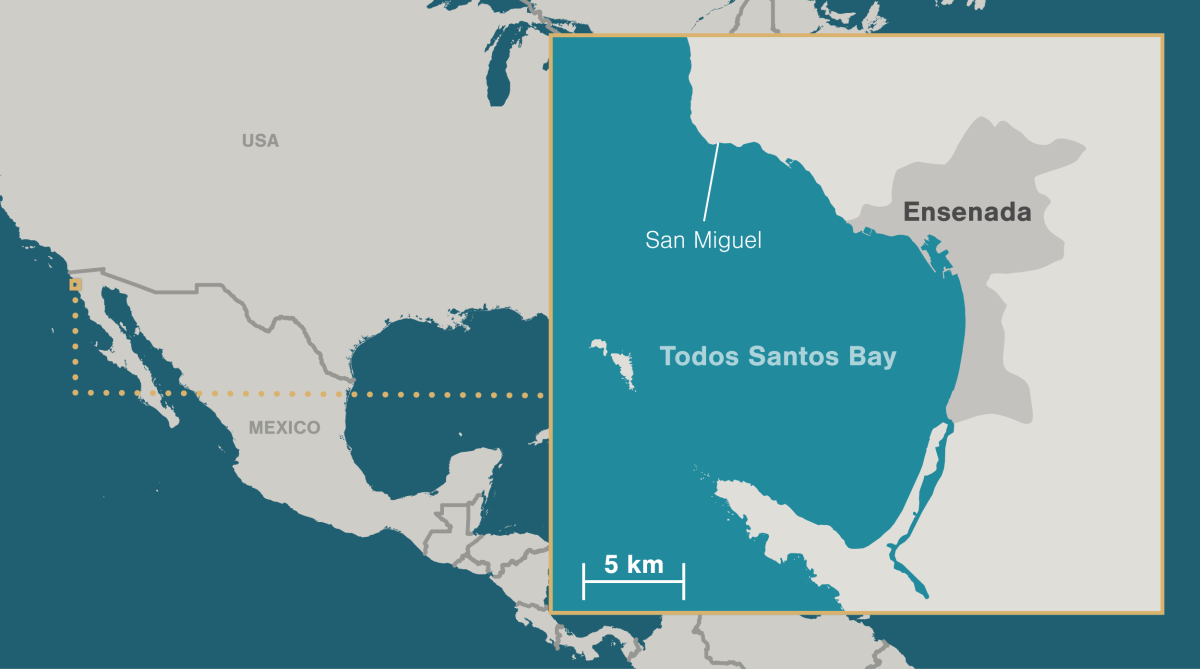 While protecting San Miguel’s beach and stream had been proposed by its residents since the 1990s, waves were not included in the conservation equation until Danemann and his team from Pronatura Noroeste emphasized the importance of the waves as part of protecting the area. In 2007, the environmental organization started studying the area around San Miguel, categorizing its natural assets to support the push for protection. Part of their work was to point out the link between the stream dynamics and wave birth. “To keep the waves, we must keep the San Miguel stream doing its natural functions,” Danemann says. Once the community understood the interconnections between ecosystems, and the links between land and sea, they were eager to make a case to the state government for the area’s protection.

Although the biologists and surfers could see they urgently needed a conservation plan, the big question was how to design a project attractive enough for local politicians to get on board. Economics, specifically tourism, and surf tourism in particular, seemed a logical starting point. So from 2014 to 2015, Trent E. Hodges, conservation program manager of Save the Waves Coalition (STW), an international nonprofit based in the United States and dedicated to the protection of surf ecosystems around the world, studied the surfing activity of several hotspots in Todos Santos Bay in Ensenada using “surfonomics,” a methodology adopted by STW to measure the economic influence of surfing. His study revealed that visitors had an average budget per day of US $111 and stayed an average of 10 days. Combined, the expenditures of visitors and local surfers ranged from $746,000 to $969,000 annually.

Hodges’s study not only highlighted the positive impact of surfing on Ensenada’s economy and the opportunities that waves provide, but also their vulnerability and the urgency of keeping the waves alive. In 2014, STW named Todos Santos Bay—where San Miguel and other surfing points such as Salsipuedes, Stacks, and Tres Emes are located—as the sixth world surfing reserve in a symbolic but well-maneuvered step that brought awareness to the importance and uniqueness of the Mexican waves. 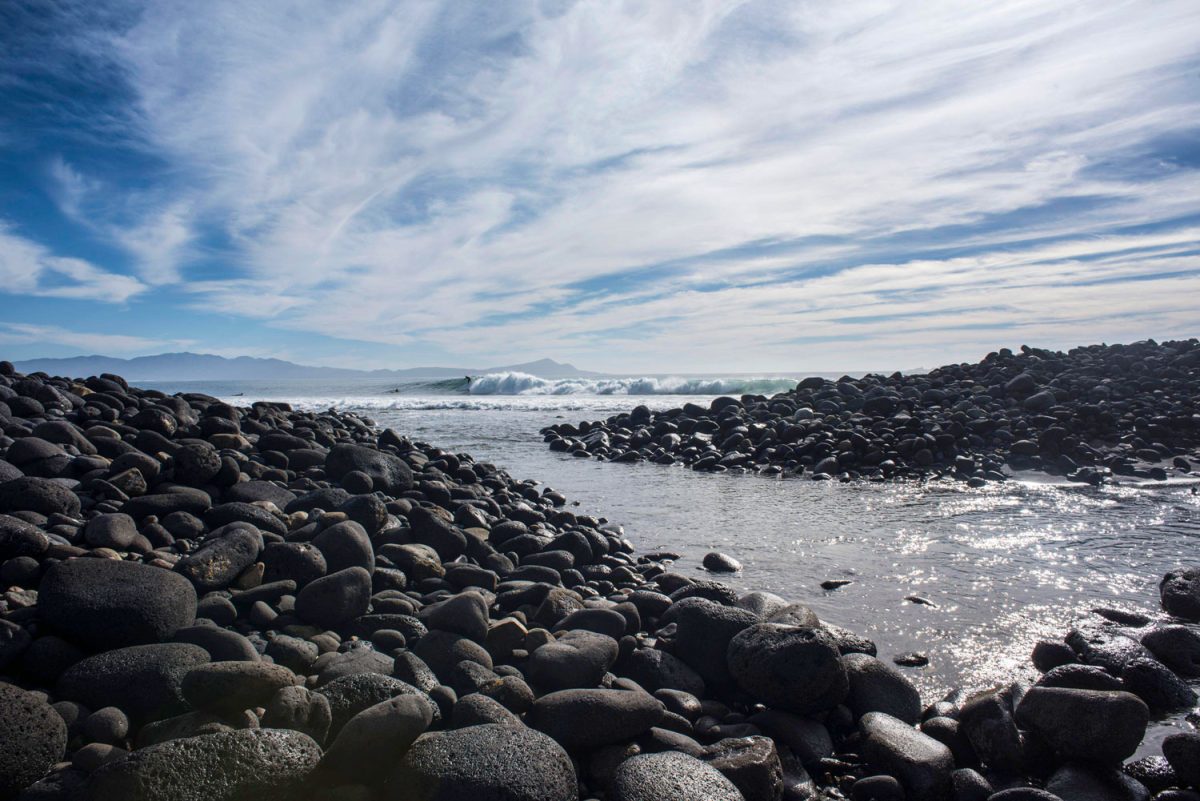 Studies by biologists showed that the stream at San Miguel “has a direct influence over wave birth.” Photo by Irene Barajas/Alamy Stock Photo

With the surfonomics data on board, the wave protection movement entered a new stage when Pronatura Noroeste, the Surf Association of Baja California, and STW started pushing for legal protected status. The groups highlighted the services offered by the San Miguel ecosystems, the lack of green space in the community, the economic benefits of surfing, and the financial benefits that a state park might bring.

After thorough study of the site, experts of Pronatura Noroeste proposed a conservation area of 67 hectares—which includes coastline, estuary, and six kilometers of stream with riparian habitats alongside—to the state government. They made the case that a state park of this size would add 9.5 percent of the 710 hectares of green areas recommended by the World Health Organization for a city of 443,000 inhabitants like Ensenada. As well, it would shelter more than 185 different species, including the blackish oystercatcher and the western sandpiper, both, among others, noted as endangered by the Secretariat of the Environment and Natural Resources of Mexico and protected by law.

Even though Arroyo San Miguel is the state’s first park, the Baja California government has done little work on the ground. Most of the protection efforts are being done by community members like Beatriz Ibarra, a Mexican surfer and representative of the Todos Santos Bay World Surfing Reserve, who works closely with women on community projects like beach cleaning. She says that making the area a state park brought awareness about the importance of the different ecosystems and their interconnectedness, but that many things need urgent attention.

“We still have a lot to do. Yes, the park currently protects the stream and coastline from sand and rock extractions, as well as clandestine dumps that pollute the environment, but more infrastructure is needed. We lack trash cans, correct signaling, parking spots, and security inside the park,” she says.

Other critical voices argue that, on paper, Arroyo San Miguel State Park is only a land protection act with no specific chapter for ocean conservation. So even if the stream and land are protected, the wave itself is still unguarded. This keeps the community actively studying new options to enlarge the protection status. The Peruvian case of Ley de preservación de las rompientes (surf protection law) in 2000, which allows coastal communities to apply for protection—including for waves—against any kind of development, is one legal model that could be adapted to Mexico.

Having a marine sciences department at the Autonomous University of Baja California, a few kilometers south of San Miguel, has also been helpful. Students engage in research projects focused on marine biodiversity in the area, looking for species that could have adapted to this unique marine ecosystem. “It’s our responsibility as a community to keep protecting the waves and the area. There is no other way but to be well organized. More data will allow us to analyze and make better decisions in the future,” explains Salazar.

For now, San Miguel’s waves keep rolling in. Surfers watch for them, children laugh and play near the stream that helps create them, crabs hide from chittering shorebirds flying above. This unique state park in Mexico seems to be ringing with the sounds of community and cooperation, nature and conservation, and the waves that will, hopefully, keep breaking far into the future. Together, these seem like a victory song.