Young women studying at the Minnesota Seaside Station were advised to wear “a short skirt, about 12 inches from the ground” for fieldwork. Photo courtesy of the University of Minnesota

Wet to the skin, her skirt soaked, breathless with excitement, Josephine Tilden first scrambled ashore on Botanical Beach on August 4, 1898. The swells of the open Pacific Ocean almost swamped the rowboat, she had little food, no shelter, no means of contacting the outside world. Tilden couldn’t have been happier. She remained on the rocky, exposed beach for four days in the pouring rain, avidly collecting marine algae from the intertidal zone and the deep, brilliant tidal pools pockmarking the sandstone. Here on Vancouver Island’s rugged west coast, she had discovered a beach exceeding her wildest dreams.

To reach this remote destination, 29-year-old Tilden traveled by train from Minnesota with her mother, who always accompanied her—young women rarely traveled on their own at that time. They stayed in the little city of Victoria, British Columbia, where Tilden sought advice from ship captains and fishermen. She heard of a distant beach glowing with fabulous tidal pools on the far-flung west coast of the island, and decided to see for herself. Having endured passage on a small steamer—a stormy trip she described as disagreeable and terrifying—she and her mother disembarked at the tiny settlement of Port Renfrew, about 100 kilometers northwest of Victoria. Local settler Tom Baird rowed them several kilometers along the treacherous coastline to land at Tilden’s coveted shore. And here, facing the churning waters of the Pacific, on an inaccessible stretch of coast famed for shipwrecks and storms, Tilden decided to establish a seaside research station for students from the American Midwest.

What could be more logical? 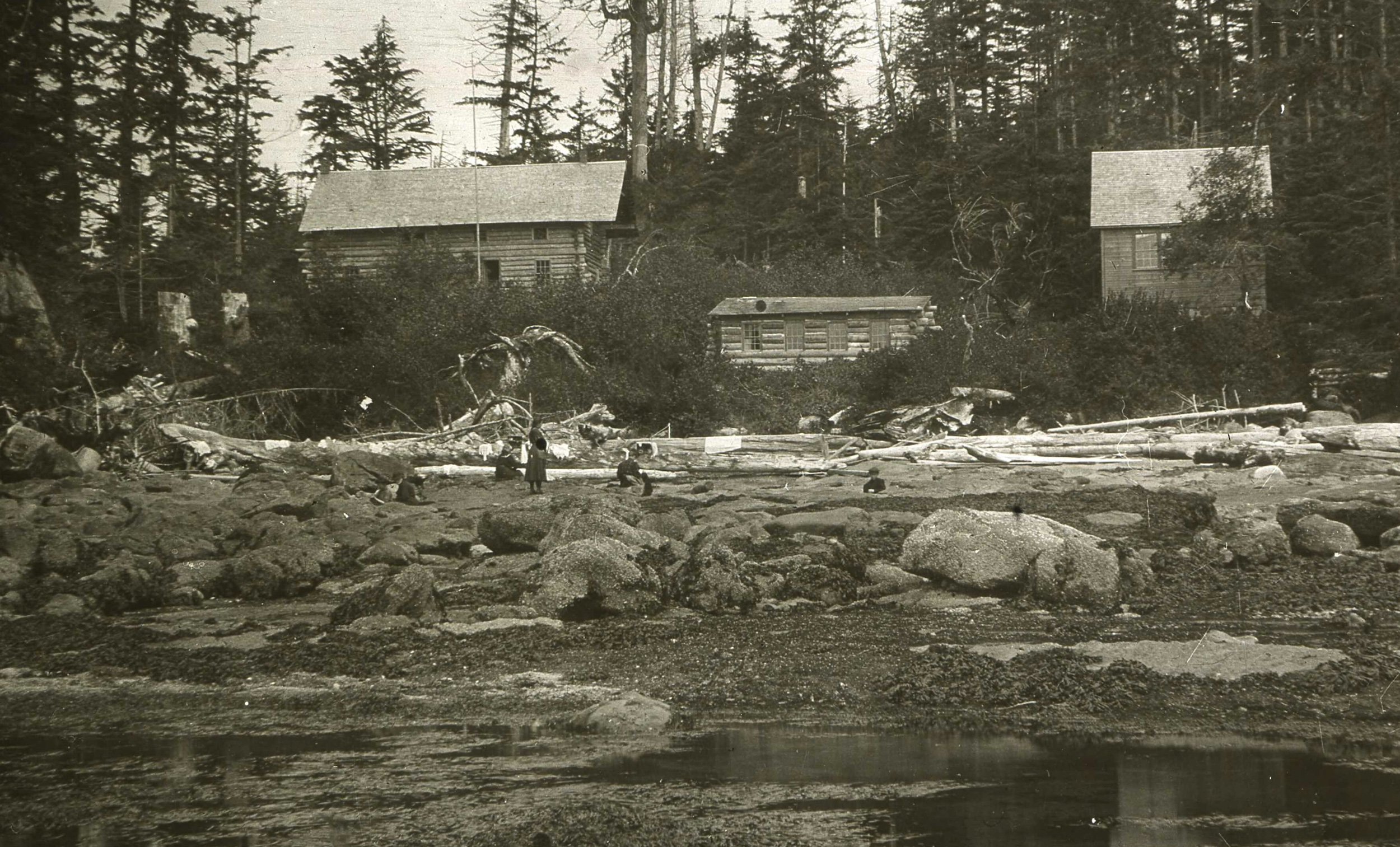 Students work on the rocks near the Minnesota Seaside Station buildings at low tide. Photo courtesy of the University of Minnesota

Tilden never feared a challenge. This determined botanist from the landlocked University of Minnesota—the first female scientist ever employed there—had already overcome opposition from her department in declaring she would pursue the little-known study of Pacific Ocean marine algae. She then convinced the university to allow her to establish the Minnesota Seaside Station on the Pacific coast, rivaling similar stations on the Atlantic coast.

Her powers of persuasion must have been astonishing. Remarkably, the university agreed—but only to provide instructors and equipment, no funds. Money came from Tilden herself, from her staunch supporter Professor Conway MacMillan, head of the department of botany, and from fees paid by the students. Tilden’s determination also greatly impressed Baird. He gave Tilden 1.6 hectares of his newly acquired land at Botanical Beach for her research station—an extraordinary gesture. Set in virgin rainforest, her patch of land overlooked the wide sandstone beach pitted with countless tidal pools—some large enough to bathe in, as students discovered, to their delight. A rocky headland bordered the property, with a large natural amphitheater where students staged plays and ceremonies and attended talks.

Construction of the seaside station buildings began early in 1901: first a large log building with a kitchen and living area downstairs and dormitories overhead; then a small laboratory near the shore. A two-story botanical laboratory later completed the station. Given the immense difficulty of access, with small boats only sometimes able to land near the site when the weather permitted, the logistical challenges of construction were immense. Photographs show huge stumps standing on Tilden’s property; the wood was likely used in construction, carried out with the assistance of Baird and other locals. 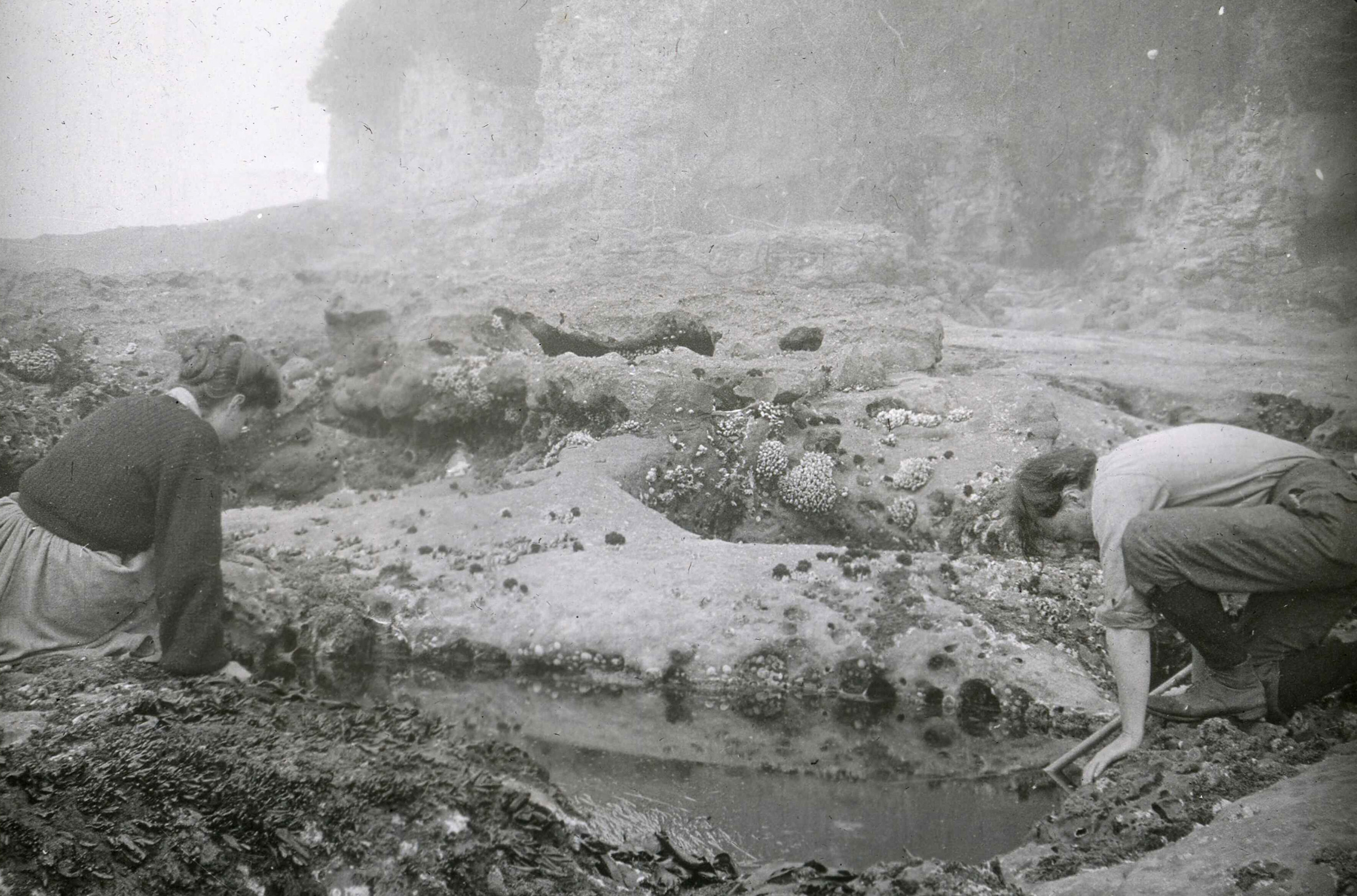 Each summer from 1901 to 1907, groups of students and instructors ventured here from Minnesota, Ohio, Nebraska, and other midwestern states. They traveled by train, cooking meals on a small stove in their rail carriage, marveling at the vast landscapes and high mountains. Many had never seen the sea before arriving in Seattle, where they took a boat to Victoria. The steamer Queen City then bore them up Vancouver Island’s exposed west coast, a memorably seasick journey for most. The groups usually disembarked several kilometers away from the seaside station at sparsely populated Port Renfrew, then trekked for hours over an appallingly rough, muddy trail, carrying all their gear.

In total, some 200 people attended the Minnesota Seaside Station; significantly, female students often made up half of each year’s participants. Most of the women studied botany, then the most readily accessible, and acceptable, science for them, due to a long tradition of women excelling as amateur naturalists. From the late 18th century, women adept in collecting, classifying, and illustrating specimens became increasingly active in botanical studies. A noteworthy number of talented American, European, and British women—usually without any formal training—wrote influential papers and even books about botany. However, they rarely identified themselves as scientists, even when doing highly original and serious work. Several English women published popular works on seaweeds in the mid-19th century, some cloaking their discoveries in heightened religious language, extolling God’s wonders in every tidal pool, as befitted genteel Victorian ladies. Margaret Gatty, a widely esteemed algae collector and author, “was compelled to wrap her science in the folds of her religious faith,” to remain within social norms, according to academic Suzanne Le-May Sheffield.

Not Josephine Tilden. She stood with a new generation of educated and influential female scientists emerging in many disciplines. She had high expectations of her female students, giving them firm instructions about clothing so they could function effectively in the field. An announcement put out by the university instructed students to wear “a short skirt, about 12 inches from the ground … bathing suit with high neck and long sleeves, for warmth, to be worn for bathing and in collecting on low tide days, one pair of heavy-soled, 10-inch-high bicycle shoes with hobnails.” 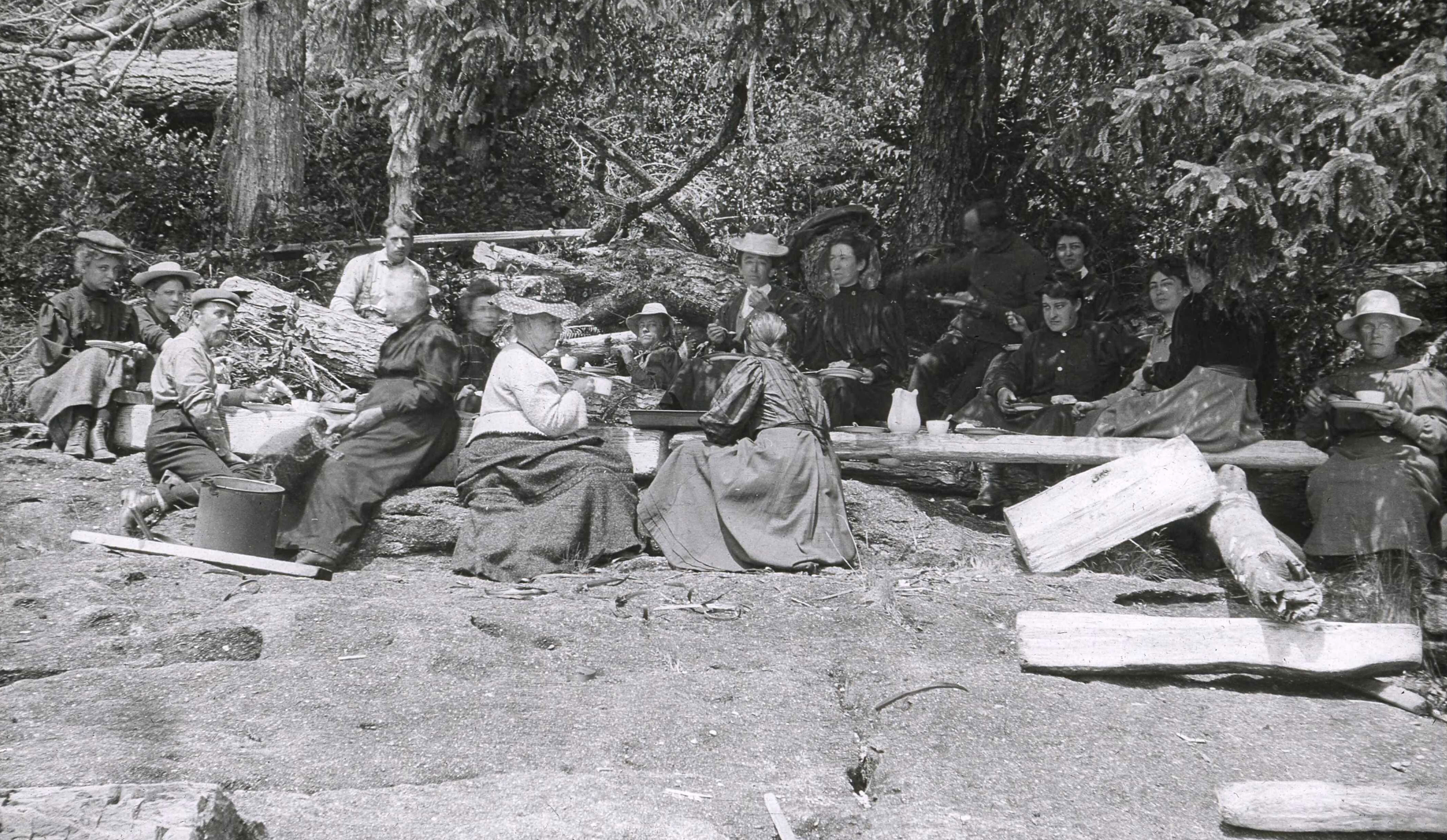 Students enjoy a dinner party on Botanical Beach after a day of outdoor classes in botany, zoology, taxonomy, and geology. Photo courtesy of the University of Minnesota

“I know all the girls will look like frights,” one student wrote in a newspaper article. “But it is all in a day’s work. …” So women roved the shore in their short skirts, “free, bold, and joyous,” to quote Gatty, who earlier strived for such liberty. The challenges of fieldwork at the seaside station required the women to plunge into tidal pools, teeter along slippery logs in the dark, slog over muddy trails carrying heavy luggage—some even donned men’s overalls, amid gales of laughter, for long hikes. They had never been so free, or so far from home, and they loved it.

The month-long stay at Botanical Beach offered a clear schedule of university courses, while actively encouraging the unconventional fun of station life. Each morning, classes in botany took place on the beach. Accustomed to inland botany, students peered awestruck into glowing tidal pools alive with brilliant algae in myriad colors, with huge sea anemones waving bright tentacles, and with snails, hermit crabs, and countless other creatures hiding in the depths. Massive lengths of giant bull kelp, thrown up on the beach, intrigued everyone; sturdy Postelsia, clinging fast on the rocky ledges like miniature palm trees amazed students who had mostly studied pond or bog algae. Laboratory work occupied the afternoons, also outdoor classes in zoology, taxonomy, and geology. After supper, everyone gathered around huge beach bonfires for songs and storytelling, for saltwater taffy made over the fire, or mussel bakes. They heard informal evening lectures, some later published in Postelsia, the journal of the seaside station. Many students slept in driftwood shelters on the beach, on mattresses of evergreen boughs, lulled by the continuous roar of the waves.

Occasionally, Tilden woke students early to experience exceptionally low tides. After exploring the beach at sunrise, they had breakfast, preserved their specimens, aired out their wet clothes, and went collecting again. Their energy and enthusiasm knew no bounds; the eccentric joy they experienced crackles like electricity from every surviving document and photograph connected to the place.

It was too good to last. The Minnesota Seaside Station foundered in bitter disputes with the university about funding and equipment. For years, MacMillan and Tilden poured their hearts, and their own salaries, into maintaining the place, believing the university would eventually lend more support. This proved a vain hope, and in 1906, MacMillan angrily resigned in protest. Tilden kept the station open in 1907, but could not continue financially. She never forgave the university.

Josephine Tilden went on to lead many research expeditions, taking students, many of them women, to Tahiti, New Zealand, Tasmania, Australia, and Hawai‘i, breaking down barriers and defying convention wherever she went. Despite further disputes with the University of Minnesota, she spent her entire career there, becoming professor of botany in 1910 until she retired in 1937. She gained international recognition for her pioneering research into marine algae, and for her many publications.

In 1948, Tilden sold her Botanical Beach property. She had not been there in over 40 years, but hated to give up the place where she arose at dawn to gaze enraptured into tidal pools. She died in 1957, still angry with the university. The station buildings gradually collapsed into the coastal rainforest—only dim traces remain. The beach is now a provincial park, accessible by road and footpath, and groups of students still visit regularly to do fieldwork there. While today’s students don’t wear long skirts or bicycle shoes, and many have never heard of Josephine Tilden, they all share the same enduring sense of wonder.

Visit modern day Botanical Beach with students and instructors from the University of Washington’s Friday Harbor lab’s “ZooBot” course. This class has used Botanical Beach as a field site for over 35 years.