In 1997, just off Grand Cayman Island, I stood up to my waist in water so vibrant it looked like it could have dyed Easter eggs a perfect pastel blue. Stingrays swirled gently around my legs. Their wide wings rippled. They skimmed the sand beneath my feet and then kited to the surface. My hands were full of squid, an offering for the rays. There must have been dozens of people around me, but I remember nothing of them, just the soft skin of the rays, and how they nosed into my hands like puppies.

For almost three decades, people have been standing in those shallows—a place known as Stingray City—to see southern stingrays, grey or brown creatures with a whitish belly, that feed from open hands. And if the others are anything like me, they’re drawn by the promise of an encounter that seems almost like magic—a moment where these wild creatures draw near enough to touch. But in 2001, artist and conservationist Guy Harvey, who lives in the Cayman Islands, decided to examine how all this attention affected the rays. He and scientists at the Guy Harvey Research Institute at Florida’s Nova Southeastern University began counting the numbers of stingrays coming to the site and tagging individual rays to learn more about their behavior and estimate their population size.

We food bearers—about 800,000 of us a year at two different sites—have changed the behavior of the animals. Southern stingrays are usually most active at night, but when researchers tracked the movements of several tourist-fed rays with acoustic tags, they found that the animals swam much more during the day, when the food arrived. Normally solitary, the fed rays crowded around visitors and the food they brought. In these close quarters, the rays became more aggressive amongst themselves; they suffered more injuries, colliding with boats and with each other. 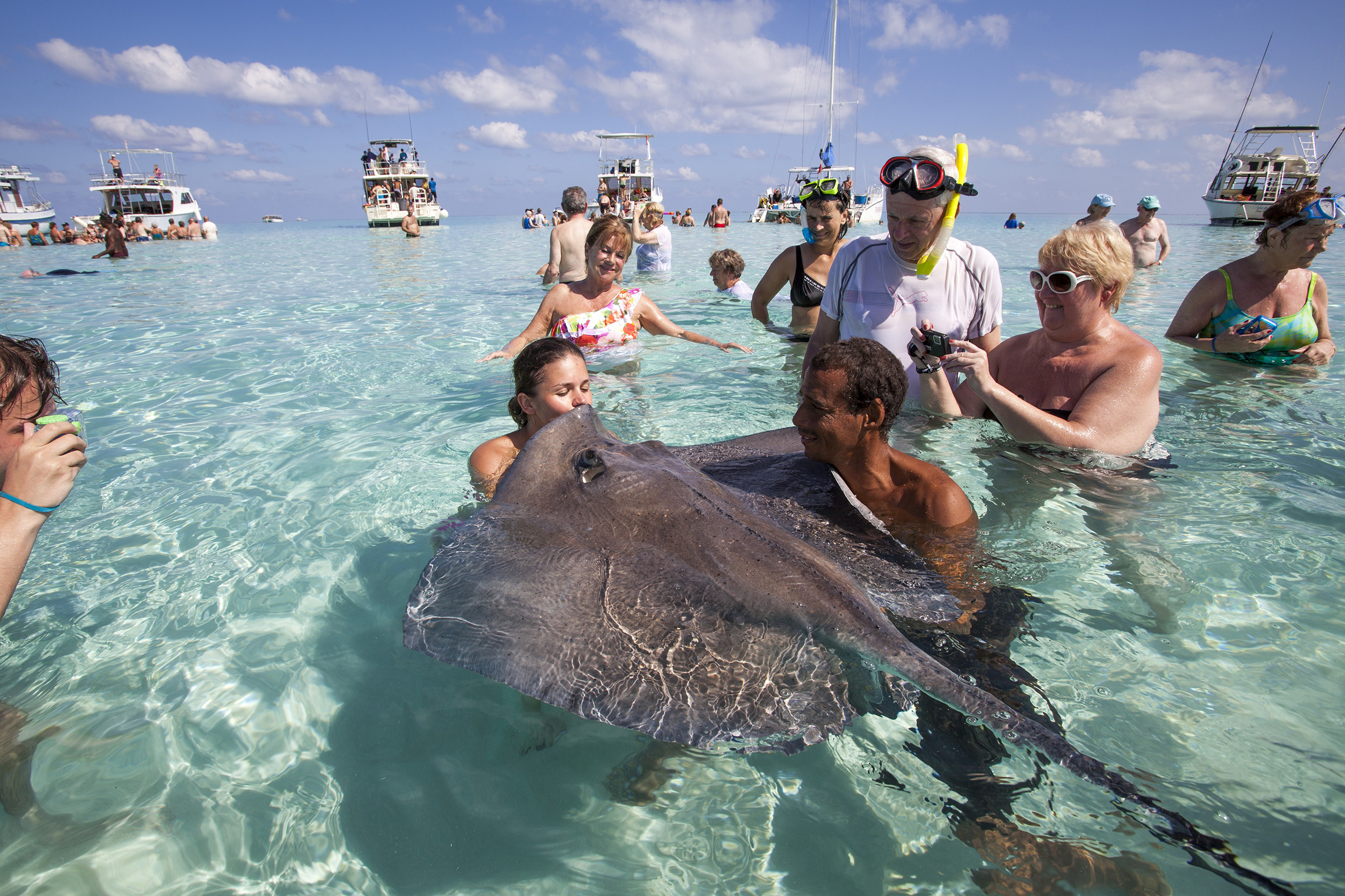 At Stingray City in the Caribbean, a tourist cuddles up with a southern stingray, unable to resist a close encounter of the marine kind. Photo by Holger Leue/Corbis

Some say people’s fond memories of the rays at Stingray City help them gain a new appreciation of the marine environment, which may even foster a more profound interest in marine conservation. I know I would like to remember that day just as it was—the clear warm sea, the velvety rays, the way the world tunneled down to what was right in front of me. But if I were to trade out a few things about that morning—switch the stingrays for Dall’s sheep, for example, change the beach for a bluebird day in the mountains, fill my hands with carrots—I’d feel very differently about it.

After years of camping, I know that feeding wildlife on land brings no good. I’m used to hanging food in trees or locking it up in bear-proof canisters to keep animals away from a campsite—both for my own protection and for theirs. Free snacks can lure animals toward roads and other populated areas—toward danger. They can come to depend on our food, become nuisances, break things, and hurt themselves and those who feed them.

Regulations and guidelines in the United States and Canada restrict wildlife lovers from feeding or approaching many species of marine mammals; in some areas, these protections extend to other sea creatures as well. But it’s not clear how well they’re followed. A writer friend in Florida talks about a dock near his house where people regularly feed manatees, despite signs saying that it’s both illegal and harmful to manatees. I’d imagine that these people are, just like I am, filled with amazement at what appears from beneath the water, that they’re not trying to hurt what they love.

So why did I put aside what I know about feeding animals once I got near the water? As a journalist, I’m used to calling a researcher who’s an expert, who has spent years studying exactly what I’m interested in. But there don’t seem to be any experts to ask. There are just smart people who have been kind enough to wonder with me.

One of these is June Dwyer, a professor emerita of English at New York’s Manhattan College who recently highlighted the human desire to connect with animals through Western literature. Even thousands of years ago, she says, people wanted to get closer to animals; in the Old Testament, for example, Isaiah’s vision of the glorious future has the wolf living with the lamb, the leopard with the baby goat, all led by a little child.

“We do have this affinity and desire to share space with exotic animals,” Dwyer says, “and marine animals are always exotic.” And food is a way to bring them closer.

They’re exotic—and yet, for many of us, accessible. To see a wilderness teeming with biodiversity, host to some of the Earth’s most fascinating creatures, I don’t have to fly halfway around the world. I just walk a few blocks from my home in California to the water to see bobbing kelp and migrating whales. I’m one of multitudes on the planet who live by the water; according to the United Nations Atlas of the Oceans, about 40 percent of the world’s population resides 100 kilometers or less from the sea.

Australia’s Cockburn Sound, a popular waterway near Perth, is one of these places where people and sea life meet. So I asked Bec Donaldson, a marine biologist who’s studied the sound’s dolphins, about the special fascination many of us have with marine animals. She cautioned that she had no hard data but she thinks one possible appeal of dolphins and other marine species is that they haven’t evolved to fear us. “Many marine mammals may not, at least at first, perceive humans as anything to be scared of.”

The highly social dolphins in Cockburn Sound learned by observing other dolphins that they could beg from passing boaters. At first, only one dolphin took fish; 10 years later, a dozen or more would approach boats for handouts. The results could be dangerous, even deadly, with the potential for dolphins to be hit by propellers or tangled in fishing line. Donaldson, who works for Murdoch University near Perth, ran a community awareness campaign to educate boaters and fishermen about the harm in handouts; she gave talks in schools and had signs posted around the harbor. The program met with some resistance. When wild animals are so beguiling, she says, people often lack the willpower to avoid engaging with them even when getting close can harm the very thing they love.

Wallace J. Nichols, a wildlife ecologist and research associate at the California Academy of Sciences, wonders if just being in the water helps people establish a mental state more open to feelings of awe and wonder. The ocean’s rhythmic, low-frequency sound, he suggests, may resemble what we once heard in the womb, and it has been shown to help people relax. When immersed in water, the levels of our stress hormones change and reach an equilibrium similar to what’s been measured in people who are meditating. And there are generally fewer distractions below the surface than above. As a result, says Nichols, who’s spent most of his career studying sea turtles, “when something comes along like a turtle, the focus on it is that much more intense.”

In Hawaii, people aren’t allowed to feed the state’s iconic green sea turtles or other species—but the turtles are quite curious and often engage with snorkelers on their own. Nichols was once swimming above a group of turtles when one rose like a hot air balloon, crashing right into him. That surprise may be the key to our transformative encounters with the wild.

“It all comes down to being truly in the moment, the flow, not knowing what’s going to happen, because you’re in the company of a wild animal,” he says. “They will likely do something that you won’t be expecting, and there’s something that’s very exciting about that because that’s often lacking in the rest of our lives.”

Once, while surfing, I got caught inside a relentless line of breaking waves. The last wave of the set reared up—much larger than the rest—and I froze. Suddenly two dolphins broke out of the face of the wave and carved arcs along its surface. As I ducked into the dark water, hoping I could hold my breath until the wave passed above me, I remember thinking, If this is it, at least I’m with the dolphins.

I don’t want to give up my memories surrounding the ocean and its inhabitants, or to stop being shaped by my time in the water. But perhaps when I think of my experience with the stingrays, what I’ll remember is that every time I step into the water, I’m not the only creature that is changed.