This article was originally published in Civil Eats, a daily news source for critical thought about the American food system.

Erin Adams steers a refurbished lobster boat down Harraseeket River toward Casco Bay in southern Maine. As she passes the tiny Pound of Tea Island, where gulls lounge and a lone red Adirondack chair sits invitingly at the water’s edge, her destination looms in the distance: a four-hectare oyster farm. It’s a windy day, and the boat pitches and rolls as Adams slows near a line of floating black oyster cages undulating in the swells.

Adams is harvesting today with Eric Oransky, her business partner at Maine Ocean Farms, who works fast, pulling up oyster bags and tossing them onto the deck. Dumping the contents onto a processing table, they count the oysters in groups of 10, occasionally knocking two together to make sure they’re alive. Then, Oransky sends each group of 10 through a chute and Adams catches them in mesh bags. Voila! They’re ready for delivery fresh off the boat.

These mesh bags aren’t made from ordinary polypropylene mesh, however. They’re woven out of string made with 100 percent European beechwood, which is sustainably harvested by thinning forests certified by the Forest Stewardship Council or the Programme for the Endorsement of Forest Certification. They’re the only plastic-free, biodegradable, home-compostable oyster harvest bags on the market.

Maine Ocean Farms uses roughly 1,200 of these bags every season. The bagging material is sold by Ocean Farms Supply, a business launched last year by Maine Ocean Farms and helmed by Adams. And although the company sells the material to oyster, clam, and mussel growers, and to wholesale distributors as far away as Mexico, California, and Florida, most of its business is local. 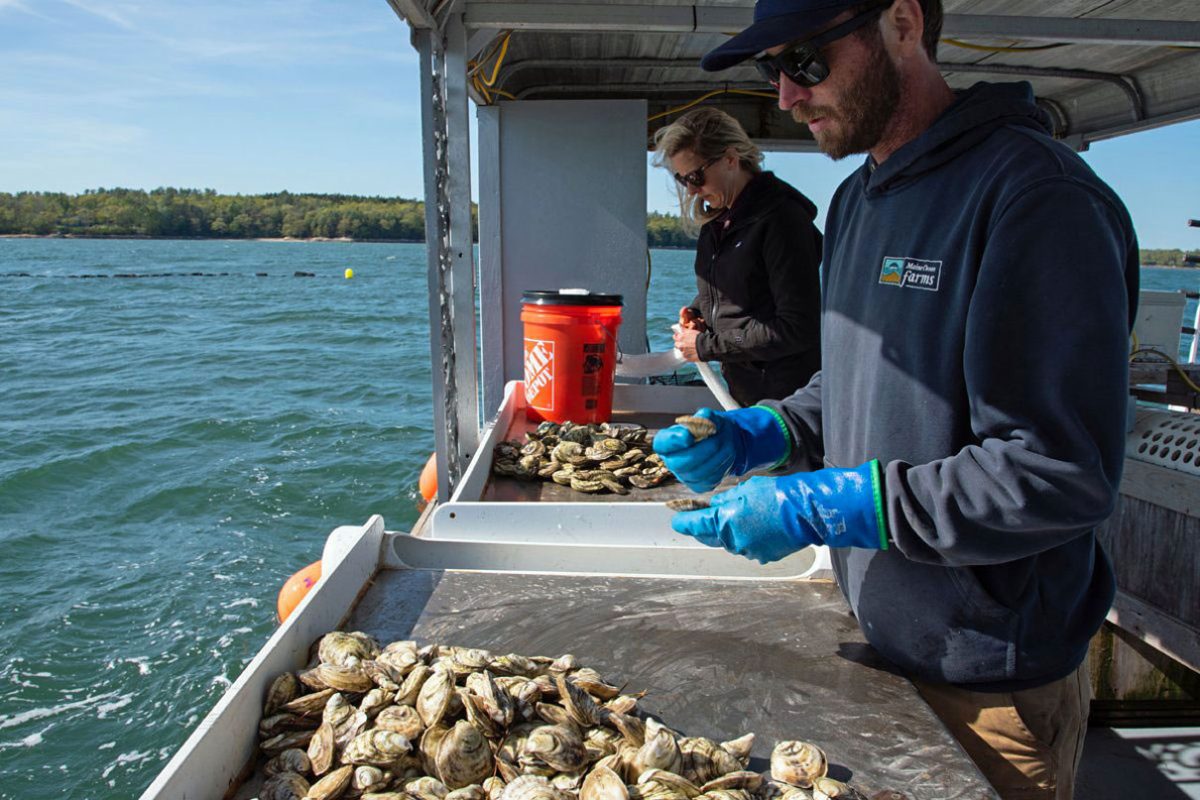 Already the company’s bags have replaced the use of 22 kilometers of polypropylene mesh, according to Adams, who adds: “We are just beginning.”

Demand for nonplastic aquaculture gear is growing, as evidenced by the 100 or so seafood farmers who packed into a session at the Northeast Aquaculture Conference in Portland, Maine, in April to hear Adams and others speak on the topic.

Aquaculture both contributes to and is potentially harmed by the ocean plastics crisis. Much of the industry’s gear, from ropes to cages to flotation devices, is made of plastic. Over time, that plastic degrades, generating millimeter-sized particles that can be ingested by shellfish and finfish, potentially harming their health. While harvest bags are a small part of the plastics used on a typical oyster farm—and in aquaculture more broadly—replacing them with a nonplastic biodegradable material is a step in the right direction. 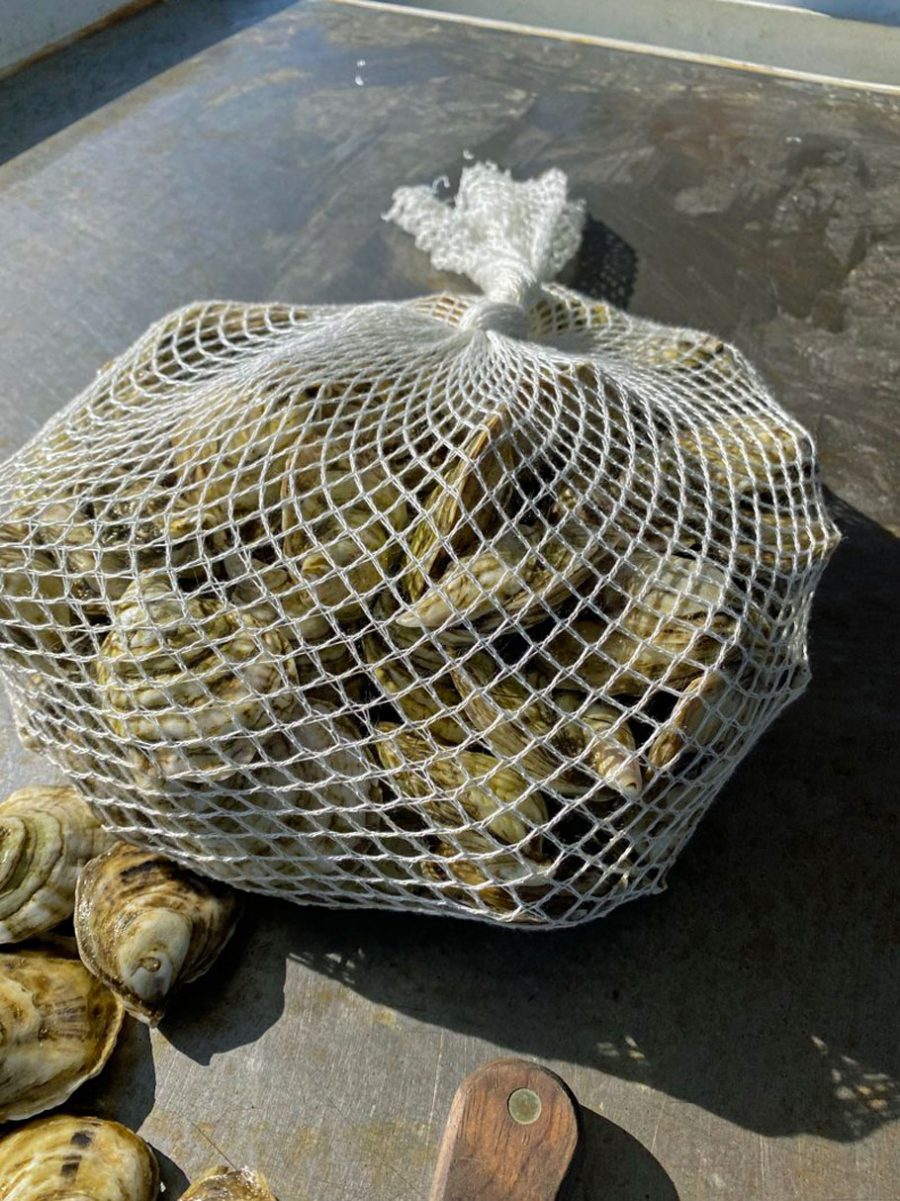 They’re just one in a growing number of emerging innovations that mariculturists—small-scale shellfish and kelp growers—are developing to reduce their contribution to the ocean plastics crisis. Other new products include kelp-based ropes and lobster bait bags, oyster cages made solely from wood and metal, and cotton- and hemp-based systems for growing shellfish larvae. While innovators are still grappling with longevity, durability, and the cost-competitiveness of new materials, the trend shows some promise.

“If you can create a biodegradable material, or something that’s more benign [for farming shellfish], then you’re improving the health of your product, the quality of your product, and the environment at the same time. It’s a win-win-win,” says Joel Baziuk, associate director, Global Ghost Gear Initiative, at the Ocean Conservancy.

Every year, 11 million tonnes of plastic enters the oceans, which are already clogged with an estimated 15 to 50 trillion pieces of plastic that never fully break down, but instead fragment into smaller and smaller pieces. Roughly 80 percent of that plastic comes from land-based sources, including wastewater, according to Britta Baechler, senior manager of ocean plastics research at the Ocean Conservancy.

“We know that [aquaculture] is a major vector, we just don’t know exactly how much, because there’s not enough research,” says Baziuk.

Some 1,300 marine animal species have been found to ingest ocean plastics, says Baechler. Bivalves filter enormous volumes of water to feed, which means that microplastics can get trapped in their gills or guts and cause blockages. Studies show that microplastics can decrease the ability of clams, oysters, and mussels to create energy; they can hinder muscle function and impair reproduction and growth. Hormone-disrupting chemicals like bisphenols and phthalates, which leach from microplastics, can also change marine animals’ behavior or affect their ability to grow, reproduce, and feed effectively.

Little is known about the impacts to humans who consume shellfish contaminated with microfiber, and more research is needed. But that doesn’t mean people shouldn’t consume shellfish, Baechler says. “It’s not a great thing for human health that we’re consuming microplastics, but it’s not a problem that’s specific to shellfish or seafood. It’s across the human food system.”

Energetic and intense, Oransky grew up in Freeport, Maine, and spent summers sailing in Casco Bay. His passion for the water led him to cofound Maine Ocean Farms in 2017, after working as a woodworker.

Like many in Maine’s mariculturist community, Oransky is young, innovative, and environmentally minded. “Those are the people who are driving the interest in reducing plastics and coming up with non-fossil fuel-based technologies,” Sebastian Belle, executive director of the Maine Aquaculture Association, says.

Oransky searched far and wide for an alternative to plastic bags already on the market, testing bioplastics made from corn, soy, and other materials before turning to the beechwood bags made by an Austrian company, Packnatur. Then it took months of trials to perfect the bag for shellfish, because Packnatur’s original bags were designed for fruit and vegetables, not heavy, sharp objects like oysters.

When the pandemic hit and oyster sales tanked, Oransky decided to pivot and make the bag project about “more than just us.” He tapped Adams to lead the effort and Ocean Farms Supply.

“People told us they’d been looking for 15 years,” for a nonplastic packaging material, Oransky says. “It’s amazing that a few mariners, woodworkers, and shipbuilders figured it out.”

The bag material is manufactured in Austria because it’s cheaper to produce there, but Adams has begun conversations with the University of Maine to explore producing them locally. “It just depends on getting that [tree] species that would be suitable for growth here,” she says. The tree also couldn’t compete with what’s used by the timber and pulp industry.

For now, Adams says they’re focused on building the market. “Let’s get the product in use, let’s drop this plastic waste stream, and then take the next step and keep an eye on the future.”

In addition to the harvest bags, Maine Ocean Farms also uses black floating bags made of high-density polyethylene (HDPE) to grow its oysters. HDPE bags are widely used because they’re cheap, but even the metal cages used by some oyster growers to anchor to the bottom of tidal areas are coated with PVC plastic and contain plastic components.

The cages may also be a source of microplastics ingested by the shellfish growing inside them. There’s scant research on the issue, but one study found that exposure to microplastics from the aquaculture grow-out materials induced lower settlement success for oyster larvae and delays in growth.

Abby Barrows, an ocean plastics researcher and oyster farmer, is on a mission to replace this plastic. She’s developing experimental oyster bags made of cork and cedar trees, with fine stainless-steel or aluminum mesh on their tops and bottom. She’s also developing ropes made from Manila hemp. 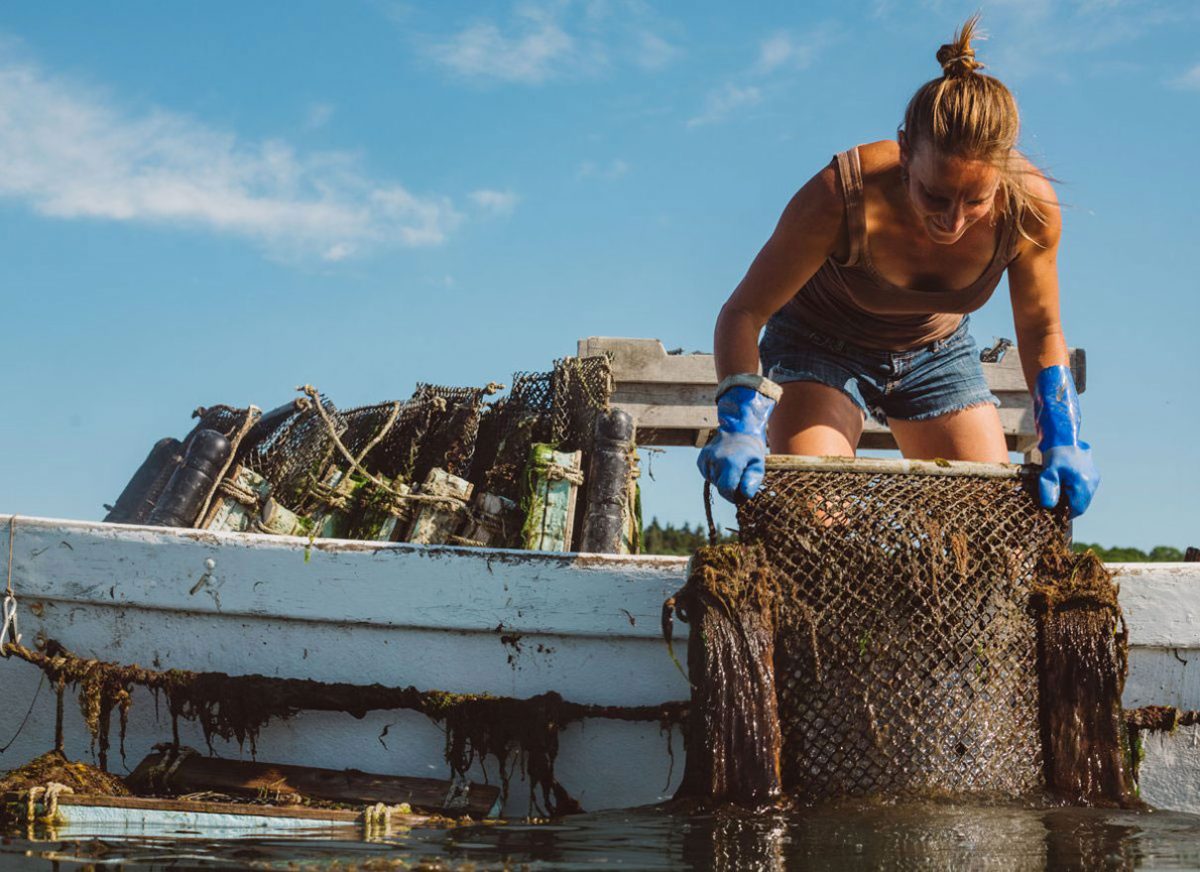 Ocean plastics researcher and oyster farmer Abby Barrows pulls up an experimental oyster bag made of metal and wood. Photo by Greta Rybus

“Oysters are touted as the most sustainable fishery, which I do believe [to be true], but we need to look at how we’re cultivating oysters and how we can further make it a sustainable system,” she says.

This summer, Barrows is running side-by-side experiments at a few farms, including her own, Long Cove Sea Farm, to compare how well baby oysters develop in wood and metal cages versus plastic ones. She’s collaborating with scientists in Nova Scotia, who will measure the microplastic content in the oysters.

“Ironically, we’re going full circle back to some of the gear that we first originally used,” Belle says. “Thirty-five to 40 years ago, our oyster growers were using bags made of wood and wire mesh.”

One of the challenges in eliminating plastics from aquaculture is that they “hold up very well in a marine environment,” says Belle. “They’re not subject to corrosion, and they can be quite strong, particularly in the winter. It’s always a balancing act between developing things that have a long enough life span and are economical to use.”

Getting that balance between longevity and biodegradability right for a nonplastic material is one reason why most efforts, other than Barrows’s, focus on replacing single use plastics like harvest or bait bags. It’s easier to develop a truly biodegradable product that doesn’t need to be used for a long time.

For example, Katie Weiler, whose start-up Viable Gear makes kelp-based aquaculture gear, wanted to tackle the mussel socks used to grow baby mussels before they’re big enough to attach to a line, but the product needed to last more than a year. She decided instead to prototype kelp-based seeding twine to replace the nylon that kelp growers currently use. The twine needs to last five months to give the kelp plants enough time to establish on long lines in the ocean, says Weiler.

Weiler is also working on bait bags for the lobster and crab industries and is interested in kelp-based cling wrap to replace the plastic used to wrap boats in the winter. For now, her start-up is targeting plastic items used in aquaculture that are easier to replace. “Eventually, if we could come up with something more durable that doesn’t shed toxic microplastics in shellfish, that would be lovely.” 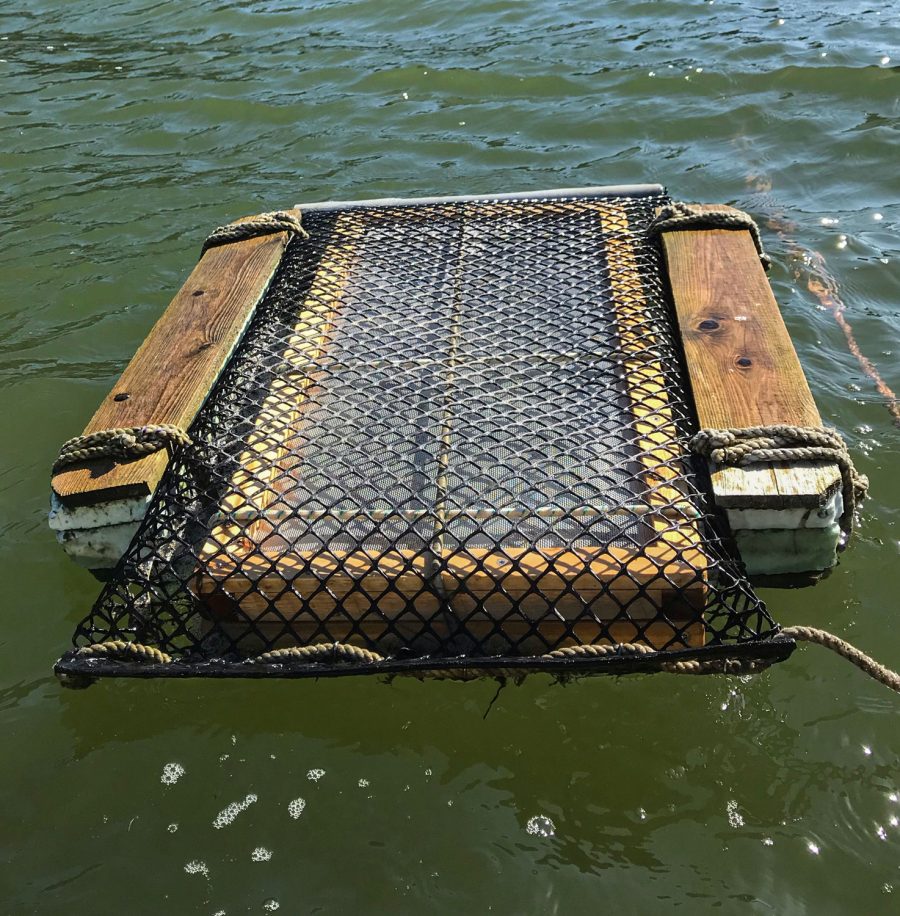 Barrows is running experiments to see how wood and metal oyster cages, such as the one pictured here, compare with plastic counterparts. Photo by Abby Barrows

Cost is another big concern. Ocean Farm Supply’s bags cost 20 cents more per bag, but they “communicate to customers that the oyster farmer cares about sustainability,” Oransky says. “Ten years ago, it would have been a hard sell,” he adds, but today, customer demands are shifting.

It’s too early for Barrows to know how much her wood and metal cages will cost, but she’s hoping to make them cost competitive, partially through longevity. They’ll be designed to last 20 to 30 years, longer than their plastic counterparts, so they’ll be “an asset for your farm,” she says.

These efforts are just the beginning of solving aquaculture’s contribution to the plastic crisis. “Every step in the right direction is a step worth taking,” Baziuk says, “even if it’s not going to solve the problem overnight.”