Along the Vietnamese coast, temples constructed in reverence to whales and other marine mammals—such as this one in Phan Thiet—house valuable information on the country’s little-studied cetaceans. Photo by Edith Fotografeert/Shutterstock

The strong afternoon sun bears down on the coastal town of Can Thanh in southern Vietnam, but inside Lăng Ông Thủy Tướng—a single-story, pale-yellow building on the town’s shoreline—it is cool. Diffused sunlight illuminates the main hall, and the air is laden with the woody aroma of burning incense. A lone man, most likely a fisherman, enters the hall, walks toward a 20-meter baleen whale skeleton displayed in a glass case, and folds his hands in deep reverence.

Lăng Ông Thủy Tướng—the temple to the god of the sea—is one of 1,000 or more such shrines on Vietnam’s 3,260-kilometer coastline. At these temples, which come in varying sizes and configurations but all house whale bones, fishermen worship in hopes that their prayers will be carried to Cá Ông, the whale spirit, and they will be blessed with a safe fishing trip and a bountiful catch. Close relatives of fishermen also visit to light candles, burn incense, and pray for the safety of their loved one, sometimes offering fruit and money, hoping their prayers are heard.

For over two centuries, fishing communities along Vietnam’s central and southern coastlines have built places of worship to honor the dead cetaceans washing up on their shores. From large ornate structures to simple graves with headstones to small wooden shoebox-sized shrines bedecked with incense and flowers, these “whale temples” are a centuries-old part of the country’s cultural history, but they also house evidence of its natural history. For this reason, Vu Long, cofounder of the Ho Chi Minh City–based Center for Biodiversity Conservation and Endangered Species (CBES), a grassroots wildlife conservation organization also involved with marine mammal research, is visiting Lăng Ông Thủy Tướng. For marine mammal researchers like Vu who are faced with extremely limited resources and a lack of funding, these whale temples—some holding dozens of skeletons—prove an invaluable source of information regarding the current and historical diversity and distribution of marine mammals in Vietnam. “Besides being a unique aspect of Vietnamese culture, whale temples are a great supplementary source of information for our research,” says Vu, who, along with his team at CBES, collects data about marine mammals in Vietnam via boat-based surveys and by monitoring cetacean strandings. 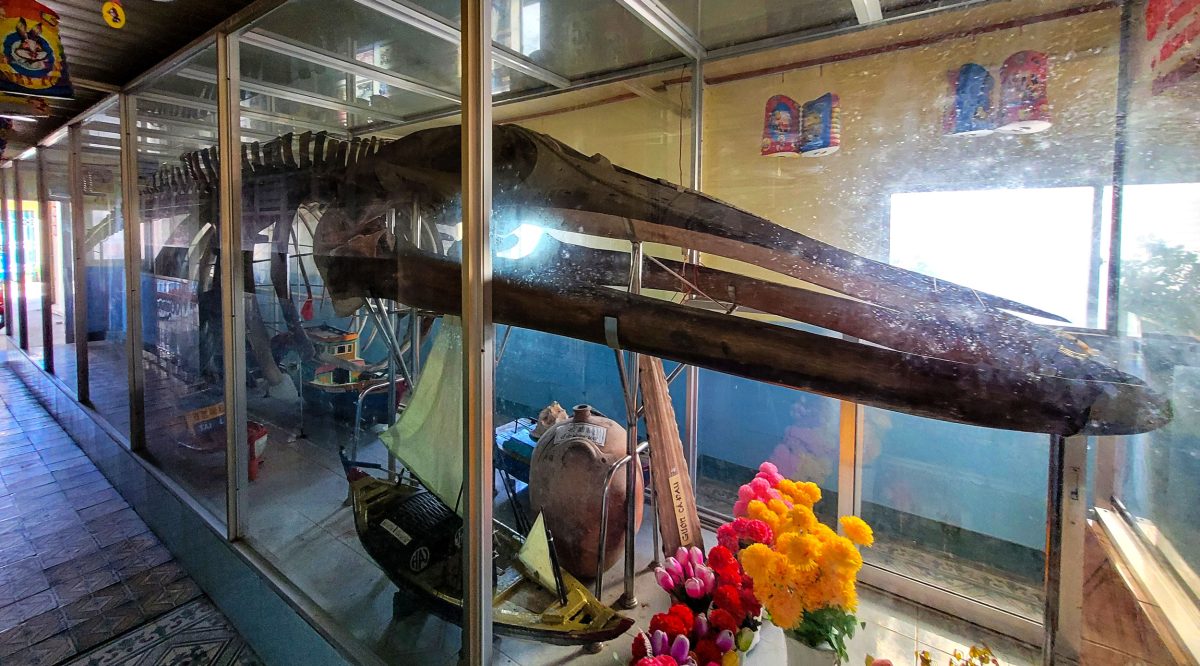 The skeleton of a baleen whale takes center stage at the temple Lăng Ông Thủy Tướng in Can Thanh, Vietnam. Photo courtesy of the Center for Biodiversity Conservation and Endangered Species

Vu sits outside the temple entrance with Lê Văn No, a 71-year-old retired fisherman who has served as a volunteer caretaker of the temple for over 20 years. Lê cleans the temple daily, and, along with others, decorates it for special occasions, such as the annual Nghinh Ông (whale worship) festival celebrated in the eighth month of the lunar calendar.

Lăng Ông Thủy Tướng is one of the country’s older known temples, the original shrine site dating back to 1805, and Lê is eager to share the story of the whale behind glass, just one of the dozens of skeletons associated with this shrine. (The others are piled in one of the temple’s rooms or stored in one of the 17 coffin-like bins located at a nearby property.) “Local people found this whale with bullet wounds,” says Lê. “It was another victim of the [Vietnam] war.”

He shows Vu a discolored black-and-white photograph from 1971 and recounts when the whale carcass was found floating in the waters near the temple. Lê was only 20 years old then but recalls that the dead animal—about the length of 13 park benches—was too large to be moved by human effort alone. So the community used a small motorboat to drag the carcass to the nearby mangroves. It decomposed there for several months before its bones were moved to the temple, where it became a focal point for worship. 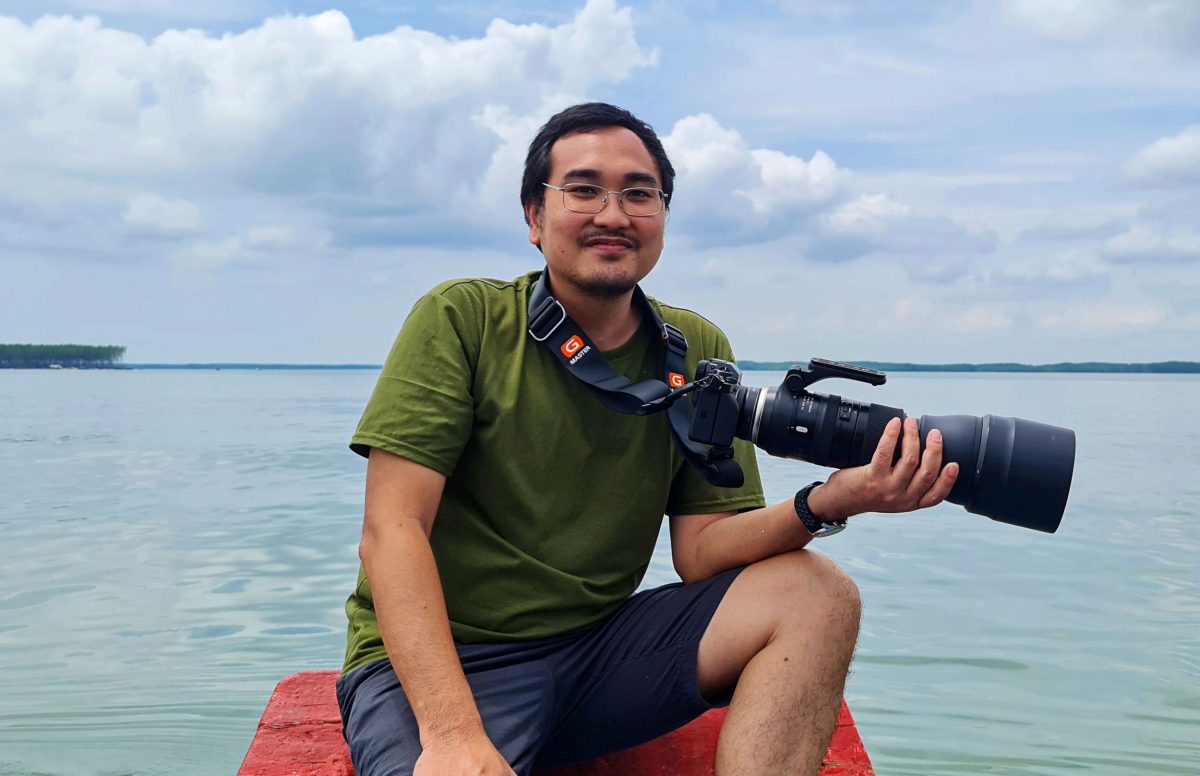 In Da Nang, about 1,000 kilometers north of Can Thanh, 35-year-old fisherman Trần Văn Mùi, has prayed at the Vạn Nam Thọ temple since he was a child. In an earlier interview conducted by Vu, he learned that Trần’s faith in the miraculous powers of whales and whale temples was reinforced in 2005, when he and his fishing crew avoided a storm that the weather forecast had failed to predict. At sea, Trần’s crew observed a whale surface and head toward shore, a sighting they took as an omen from Cá Ông, the whale spirit. They sailed home earlier than planned. In doing so, Trần believes, they avoided the storm, and their lives were saved.

According to Vu, this profound faith in the mystical power of whales can be traced back to three different origin stories. One is rooted in Hinduism and another in Buddhism, but the one that is most widely believed in Vietnam comes from the country’s history. In the 18th century, Nguyễn Ánh, a powerful warlord, was waging a 20-plus-year war against his enemies. On the verge of getting captured, he prayed to the gods for a way to escape. At that moment, two whales rose from the sea and carried him and his flagship away from the enemy, thus ensuring his safety. In 1802, Nguyễn Ánh became the first emperor of a unified Vietnamese kingdom, the precursor to modern Vietnam. As a token of gratitude to the gods, Nguyễn Ánh declared that all whales in Vietnamese waters must be worshipped as gods.

In keeping with this historical story, fishermen consider it their duty to bring a whale they find floating or catch accidentally to shore and conduct a burial ceremony—on the beach or in a dedicated whale graveyard. After three years or so, they exhume the bones and transfer them to the community’s whale temple. It’s a reverence akin to that shown for a parent or an elder. “When fishermen see a stranded whale, they believe that the animal has chosen their village as its final resting place,” explains Vu. “They feel honored and obligated to give it a proper burial ceremony.”

Years, decades, and in some places even centuries of skeletons collected at temples have resulted in a treasure trove of information about Vietnam’s cetaceans, not just whales. (If fishermen see a dead animal with a horizontal tail and a blowhole, they usually consider it a whale. As a result, the temples tend to have a mix of whale, dolphin, and porpoise bones.) 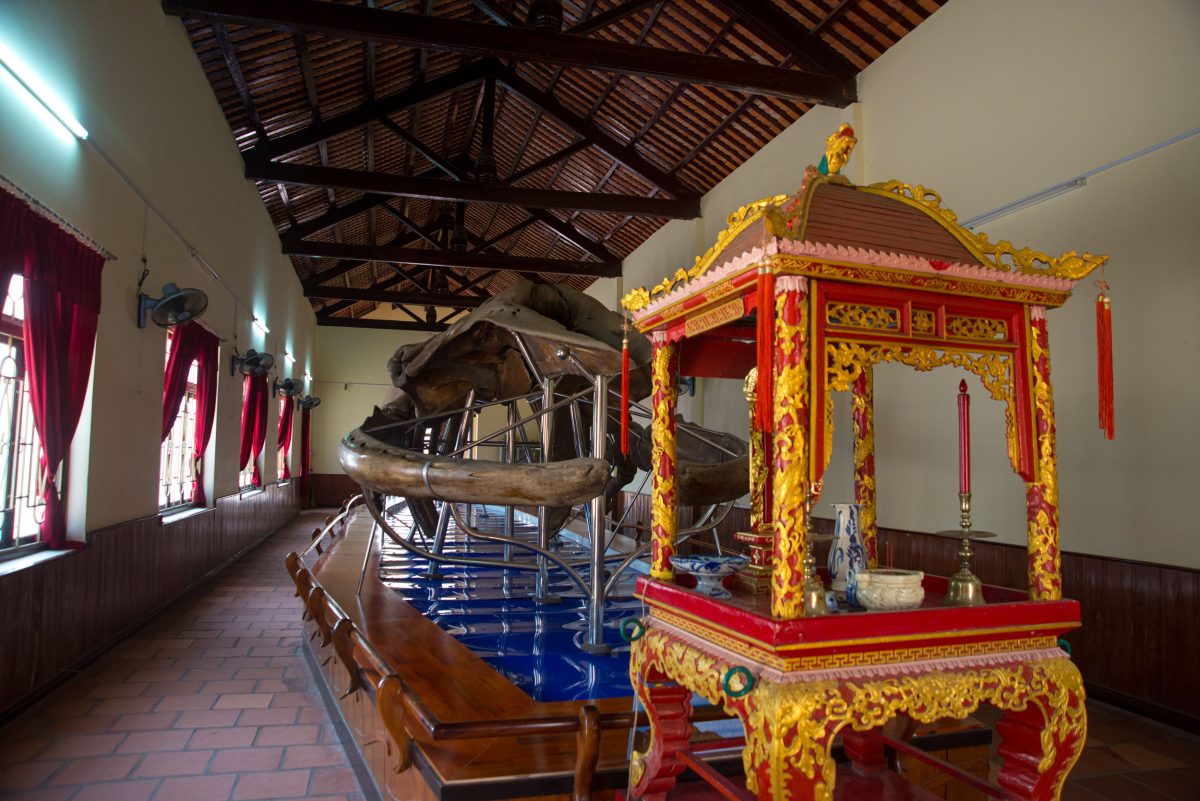 While some displays at the whale temple in Phan Thiet are indoors and elaborate, the temples vary in form throughout the country, from simple outdoor shrines to more elaborate, decorative structures. Photo by Anna Art/Shutterstock

Vu, who has studied the marine mammals of Vietnam for a decade, is one of the authors of a 2021 paper that highlights the wealth of information inside whale temples. He emphasizes the need for a multidisciplinary approach—including social scientists and cultural historians, for instance—to studying them.

Over the years, Vu and his team have located more than 200 temples. For their recent paper, they visited 18 whale temples on Vietnam’s central coast, where they identified and measured 140 marine mammal skeletons from 15 species. To determine the species, they examined the dentition and took 10 specific skull measurements.

Some whale temples studied for the paper had acquired just a single carcass since the 19th century, others received a dead dolphin or whale every month, often of differing species. Several of the species they found in the temples were not seen on their boat surveys, explains Vu. One example was the data deficient Omura’s whale, a whale that was first described by Japanese scientists in 2003. Vu and his colleagues found two specimens in their whale temple survey. These finds brought the species’ record in Vietnam to five.

Much to their surprise, Vu and his coauthors also came across three dugong skulls during their visit to two whale temples in the northern part of the central coast. In recent times, the presence of dugongs has only been confirmed in southwestern Vietnam and the Con Dao archipelago, located to the southeast of the country. So this observation sheds new light on their historical distribution. They think the skulls date back to the 1990s through to the early 2000s, indicating that the dugongs’ local extinction is recent. Vu also theorizes that the local extinction of dugongs was most likely caused by human activities like hunting, by-catch, and the destruction of their seagrass habitats.

Emma Carroll, a whale researcher and an associate professor at the University of Auckland (Waipapa Taumata Rau) in New Zealand, says that “societies suffer from shifting baselines, the idea that what we see now is normal, as there’s no collective memory of the biodiversity that thrived even in the recent past. The collections within these temples are reminders of how much has changed, for example, the shift in dugong distribution that was revealed [in Vu’s paper].” 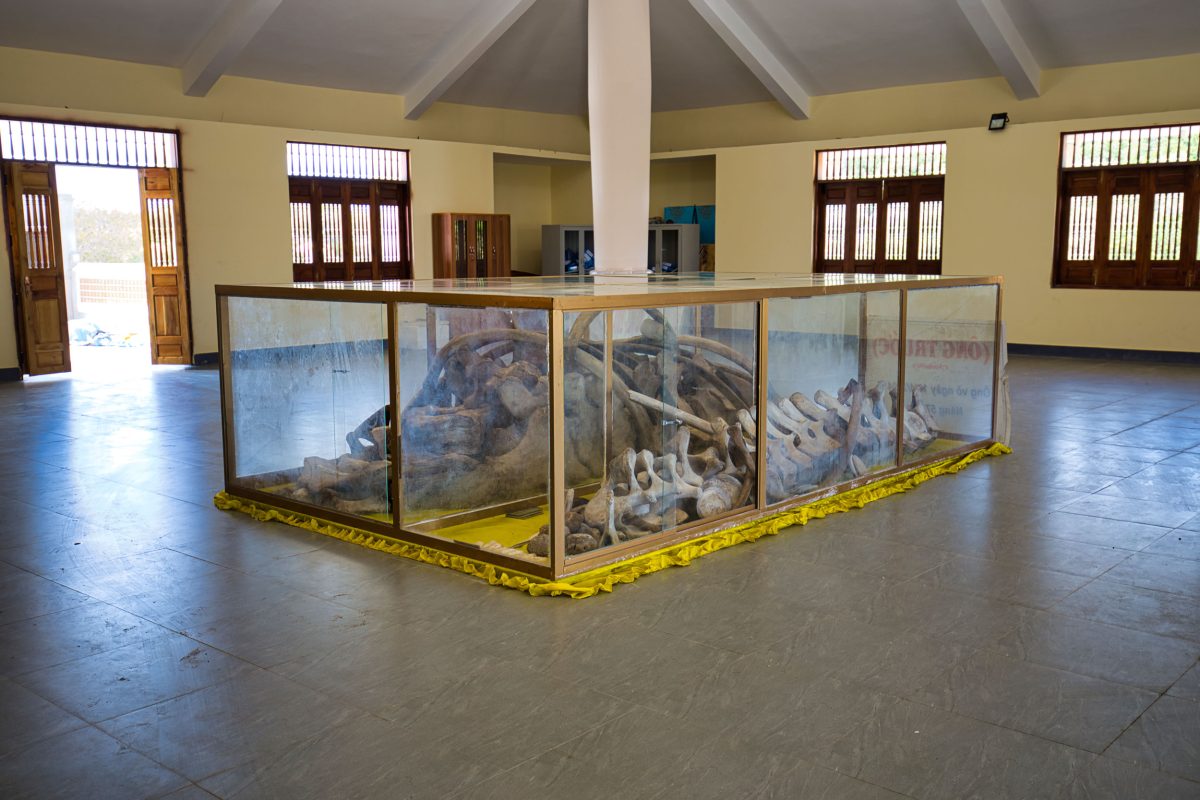 She adds that the collection of bones holds a unique archive of species diversity, population abundance, and distribution information that can be revealed with modern genetic analysis techniques, but emphasizes that these studies should only happen with community support and approval.

Vu and his team have continued documenting whale temples even after the publication of the paper. To date, they have identified 25 cetacean species in whale temples, including rare and endangered species like sperm whales. In comparison, they’ve identified only 20 cetacean species via the stranding monitoring done over the past five years and just three species in their boat-based surveys. These results underscore the importance of whale temples as information storehouses about Vietnam’s cetaceans. Vu hopes that the temples will, in the long run, become key centers for interaction with fishermen and awareness campaigns about sustainable fishing.

For now, Vu and his team still have hundreds of whale temples to document. But they are unfazed. By analyzing and dating the specimens found in these repositories, the researchers are confident of narrowing the information gaps that exist around Vietnam’s marine mammal diversity and its distribution over time.

Back at Lăng Ông Thủy Tướng, as Vu and Lê chat, a pair of curious Vietnamese tourists wander up to the temple entrance. Lê slowly rises from his chair, and walks over to greet them and share whale worship stories with this eager, younger audience.