Whittier is a launch pad for many tourists exploring the Alaska wilderness. Photo by P. A. Lawrence, LLC/Alamy Stock Photo

A tsunami is the last thing anyone needs during a pandemic. But geologists warn one could soon strike Whittier, Alaska, a small city on the edge of Prince William Sound. The warning stems from signs that a receding glacier 50 kilometers away has destabilized a massive mountainside. Geologists say if it slides into the ocean, it could trigger a tsunami that would hit Whittier with little warning.

In recent decades, three big landslide-generated tsunamis have altered the landscape in Alaska. Additionally, in 1964’s Good Friday earthquake, Whittier lost 13 lives, two sawmills, and other infrastructure to a tsunami. Today, the city’s protections include a public alert system and a marked evacuation route. But the pending slide poses a unique danger, both for its enormous size, and for the remoteness of the mountain, which is not connected to any warning system.

“This one could be much larger,” says geologist Bretwood Higman, executive director of the nonprofit science advisory group Ground Truth Alaska. Higman is among 14 geologists who penned a public letter in May warning of the potential danger, a pronouncement that briefly thrust Whittier into local and national headlines.

Whittier is a famously quirky port city nestled between the ocean and a wall of glacier-clad mountains. The only ways out are by boat or through a roughly hewn, four-kilometer long, one-lane tunnel that is alternately shared by cars and trains. Most of the town’s nearly 300 residents live in a 14-story condominium erected in the 1950s as part of a military base that was never completed.

With its clanging railcars and Cold War charm, Whittier is the gateway to scenic Prince William Sound. Its waterfront hosts an inn, open-air eateries, and companies offering tours by boat, jet ski, or kayak. Its placid harbor brims with pleasure boats and fishing vessels. Ferries, and even cruise ships, are weekly arrivals that add to the bustle, although they have been absent throughout the ongoing pandemic.

“It’s really an amazing and very diverse place,” says Whittier’s mayor Dave Dickason. “And people here look after each other.”

The mountain slope that geologists say now threatens Whittier sits on the edge of a narrow inlet two hours away by boat, near Harriman Fiord. Satellite imagery shows that a kilometer-high slab of the mountain’s face slipped seaward in recent years as the massive Barry Glacier retreated, removing the ice that buttressed the slope. If it fails suddenly, Higman and his colleagues wrote in their letter, it could spawn “a tsunami hundreds of feet tall.” The tsunami would dissipate crossing Prince William Sound, but could still reach Whittier with destructive force in as little as 20 minutes. 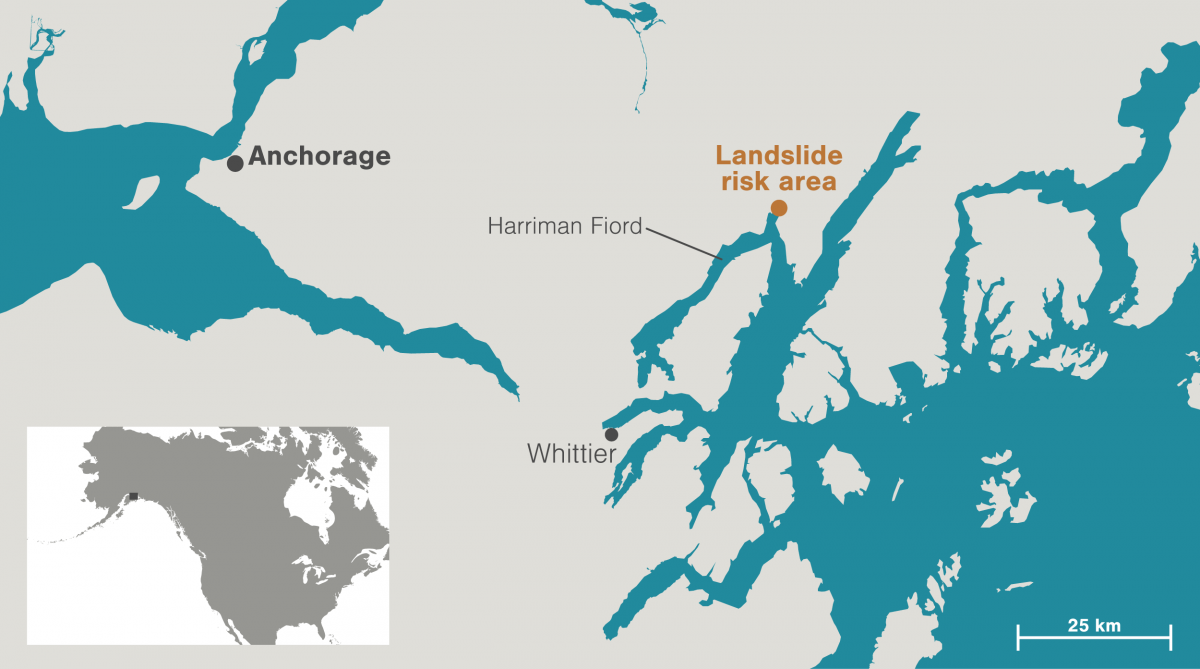 But the mountain does not need to collapse to impact Whittier. Just the threat that it might is already causing problems for the community. Harriman Fiord is a popular destination for tour boats, kayakers, and private mariners who come to watch the sea otters ply its usually calm waters, or gaze at the glaciers spilling from soaring mountains. Most tourists arrive via Whittier, where their purchases support local jobs.

Before the tsunami warning was even issued, the pandemic had severely depressed tourism, according to Lisa Kruse, the sales and marketing director for Phillips Cruises and Tours, which operates daily tours from Whittier that include stops in Harriman Fiord. The warning, and subsequent advisories from state officials and representatives with the Chugach National Forest to avoid Harriman Fiord, has added a new hurdle for companies trying to salvage the summer.

“We’ve been experimenting with a modified route for our 2020 season,” says Kruse, whose company has been offering tours of Harriman Fiord since 1987. Fortunately, she says, Prince William Sound is a big place, with plenty of opportunities outside of Harriman to view glaciers and wildlife. Phillips resumed boat tours in late June using its new temporary route.

Still, Harriman is a top draw, and some kayak and water taxi companies say the tsunami warning hurt businesses already reeling from the pandemic. A particular frustration is the uncertainty of the warning. The tsunami could happen this year—or within the next 20. Or maybe never.

The uncertainty has inspired some salty words on social media and along Whittier’s waterfront. Some complain the warning came as a “bombshell” announcement by geologists who had not physically visited the site, and that it arrived by public letter instead of more official channels that might have included plans for research or safety measures. Critics also point to other apparently unstable slopes that have not failed. The geologists’ letter acknowledges this point, saying the slope may not fail and may instead stabilize for centuries.

Higman says the uncertainty has put him and other geologists in an awkward position. “It might be that nothing happens. But I think the best thing is to release our best knowledge and let people make informed decisions about the area.”

Higman, Dickason, and tour operators all hope government agencies can overcome the significant challenges of access, funding, and the ongoing pandemic to get scientists on the ground to study the precarious mountain up close. So far, both Higman and Dickason are impressed by the response. They say state and federal agencies are working together to secure funding, coordinate roles, and determine how best to monitor the site, as state and university officials recently described in a podcast hosted by Alaska senator Lisa Murkowski.

Regardless of whether the landslide occurs, Dickason hopes a long-term outcome is more tools and resources to protect Whittier. “As glaciers continue receding,” he says, “we may see more of this type of situation.”