Every year, nearly 13 million tourists converge on the shores of Virginia Beach, a city of half a million perched where southeast Virginia meets the ocean’s edge. They come to explore wildlife refuges, to be photographed with an 10-tonne bronze statue of King Neptune, and to swim in the cool Atlantic Ocean. And they spend more than a billion US dollars in the process.

Residents of similar beach cities that pepper the US East Coast know tourists will come each summer, bringing an enthusiasm for coastal indulgences. But the allure of East Coast beaches is in jeopardy, some residents say, as a new industry gets set to spring up along the shore.

In January, the US government announced a plan to open parts of the East Coast to offshore oil drilling, with the first drilling leases likely going on sale by 2021. The highly contentious plan would see oil rigs operating offshore from Virginia down to Georgia. For some leaders of the region’s tourism industry, it’s a future they hope never materializes.

“We’re all resort people, we thrive on the tourism industry,” says Billy Almond, chair of the Virginia Beach Resort Advisory Commission (RAC). “It’s our bread and butter. We just don’t see the reward here with the amount of risk we would be taking.”

The concern in many areas is the same: in a post-Deepwater Horizon world, no one wants disaster to wash up on their shores. “Any type of an oil spill could be devastating to the local economy,” says Vicki Clark, president of the Cape May County Chamber of Commerce in New Jersey. 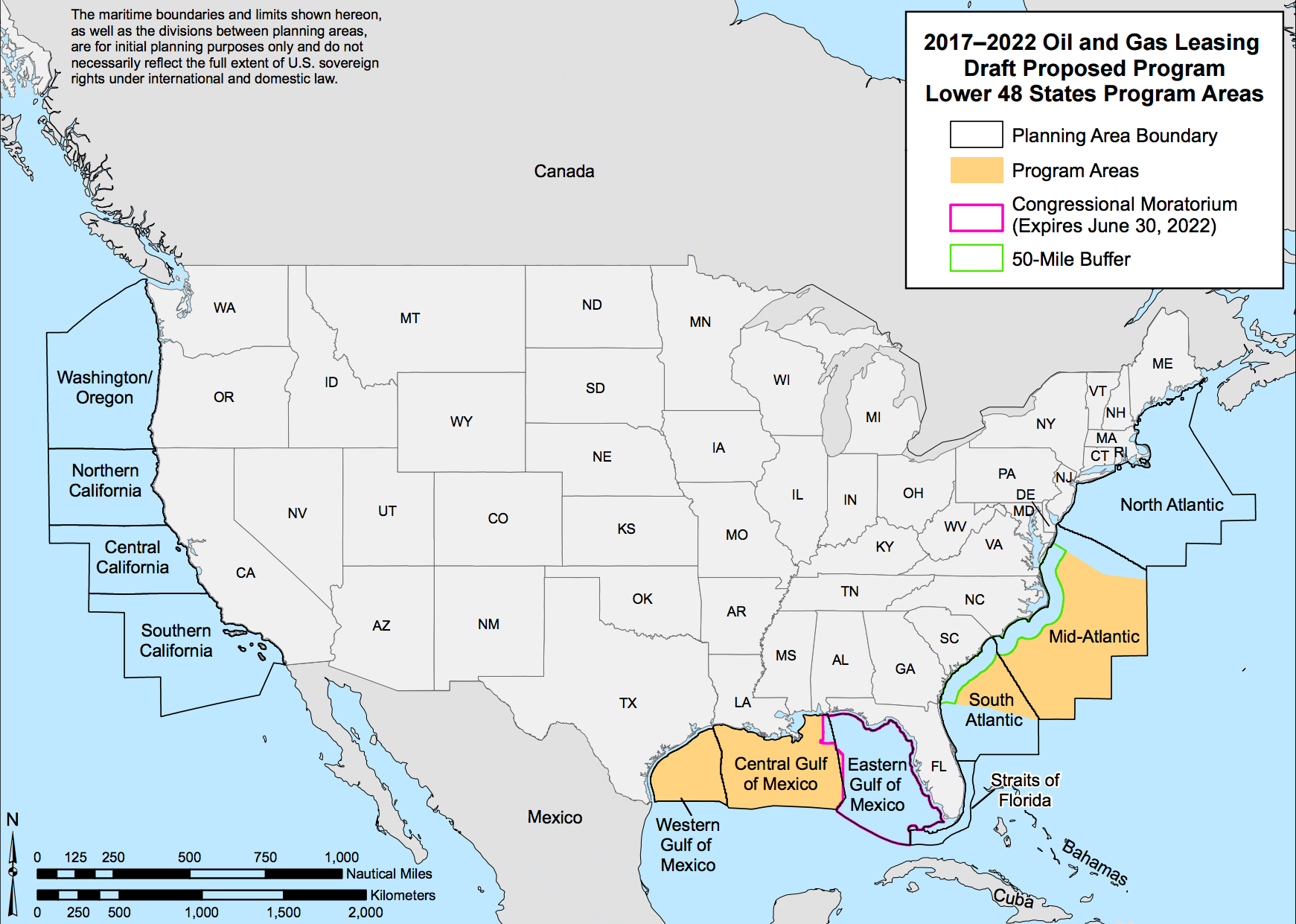 A map outlining the offshore regions along the Atlantic coast that are scheduled to be opened for drilling. Photo by the Bureau for Ocean Energy Management

In May, the RAC voted to oppose offshore oil exploration, joining the Virginia Beach restaurant and hotel associations in making their opposition official. It’s an action that’s being repeated all along the coast. The Southern Environmental Law Center (SELC), along with the ocean-advocacy group Oceana, has documented more than 60 coastal cities and towns that have made official declarations against some form of oil or gas activity. Eight tourism and commerce organizations are on the list.

None of these groups have the individual authority to stop drilling from happening, a decision that ultimately rests in the hands of the federal government. But they’re hoping their concerns will make their way up the political ladder to leaders who have the power to influence the final call. “The Obama administration said some places were just too special to drill,” says SELC attorney Sierra Weaver. “When folks here think about [places like] the Chesapeake Bay, they also believe these places are too special to drill.”

By the government’s latest estimate, the Atlantic Outer Continental Shelf contains 4.72 billion barrels of oil and enough natural gas to power all the homes in the United States for roughly eight years.

In Virginia, many state leaders are all for drilling. Governor Terry McAuliffe has pushed for oil and gas development, as has state representative Scott Rigell, who in 2013 introduced a bill to lease Virginia’s offshore land to oil drillers. The bill died in Congress, but it was touted as an economic boon for the state, with a proposed $2.9-billion in state revenue and 25,000 new jobs by 2035.

“The time to create new jobs is now,” Rigell said at the time. “The energy sector is the number one opportunity to do that.”

Tourism, though, is already a major source of jobs and revenue. In 2013, tourists visiting coastal Virginia spent $4.4-billion, generating $340-million in city and state tax revenue and supporting more than 43,000 jobs.

“Oil is a huge industry, it [provides] tremendous jobs, it’s all that good stuff when it’s working well,” says Almond. “But we’re at ground zero. We’re where the Atlantic Ocean hits the sand, and that’s why we’ve come out against it.”

In June, the Dare County tourism board passed a resolution opposing drilling.

“Looking at the numbers it’s pretty clear to us,” Nettles says. “Why would you risk a proven industry chasing one that may or may not materialize 21 years from now?”