The artificial lighting of Copacabana Beach in Rio de Janeiro, Brazil, casts a glow across the countryside. Photo by Dennis Hallinan/Alamy Stock Photo

Humans are lighting up the planet like never before. More than 80 percent of the world experiences some degree of light pollution that brightens the night sky. What effect this artificial lighting has on ecosystems is not entirely clear, but as developing nations pave, clear cut, and light their coastlines, researchers have a chance to explore the consequences of artificial lighting in real time.

In Brazil, the world’s largest tropical nation, Juliana Ribeirão de Freitas has started tracking the spread of artificial lighting across her homeland. She recently published a study mapping the intensity of light pollution across all of Brazil’s ecosystems, from the Amazon rainforests to the Atlantic Ocean.

The ecosystems touched the most by artificial light are mangroves and restingas, habitats concentrated on Brazil’s heavily populated coastline. In mangroves, tangles of saltwater-loving trees and shrubs poke their spindly webs of roots out at low tide. Restingas, on the other hand, are a rare kind of coastal forest dominated by sandy shores, where squat trees and shrubs, creeping ground cover, and even cacti grow. Human encroachment already threatens—and has shrunk the extent of—both ecosystems, and artificial lighting is on the rise.

The amount of land subject to artificial lighting has been increasing sharply in the country since the mid-1990s. To see this shift, Freitas and a team in the UK evaluated satellite images of the night sky over Brazil during two periods: from 1992 to 1996, and from 2008 to 2012. For each point on the map, they calculated an illumination value, ranging from complete darkness to saturated bright light. 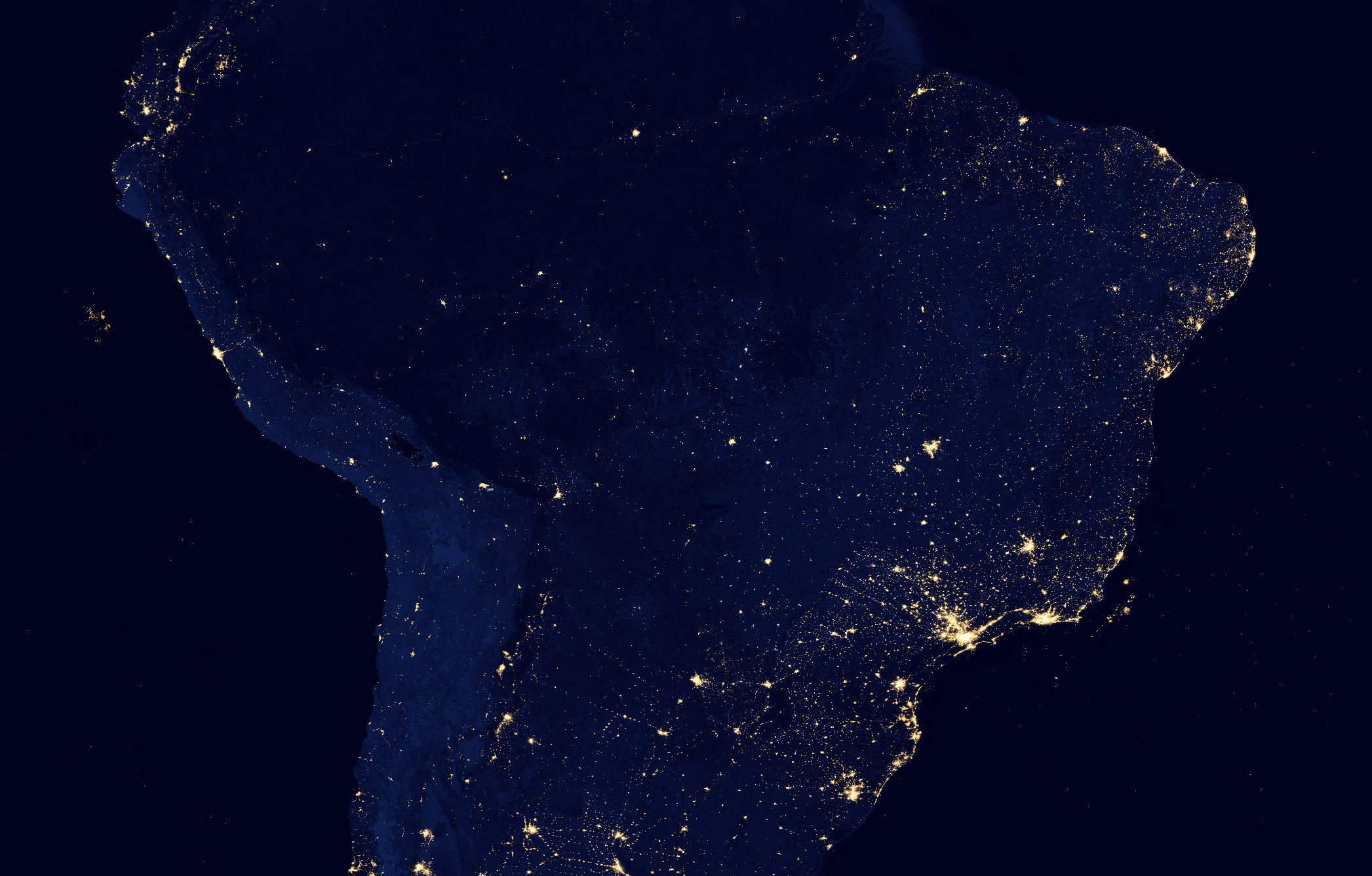 A satellite image shows the extent of artificial lighting in Brazil in 2012. Photo by NASA Earth Observatory/NOAA NGDC

Freitas’s research revealed that artificial lighting is affecting 15 percent of Brazil’s mangrove forests, and 22 percent of its restingas. While not all of the increases in lighting were what the researchers would consider “noticeable levels,” Freitas doesn’t expect that to remain the case for long.

“If the patterns of development keep going, we will probably have more areas with detectable light in the future,” says Freitas.

“There’s been really very little direct fieldwork as yet on the impacts of light pollution, especially on plants,” says New England Wild Flower Society ecologist Elizabeth Farnsworth, who was not involved in the new study.

But there are numerous ways light pollution could potentially affect mangrove forests and other vegetation, Farnsworth says.

“Plants like animals have circadian rhythms,” she says. “They wake up and they go to sleep. Length of day in particular can trigger a whole range of hormonal responses.”

Past studies suggest that light (or the lack of it)* has the potential to set off hormonal changes that regulate everything from cellular repair to reproduction in plants. Interactions between plants and animals—pollination by nocturnal species such as bats and moths, for example—could also be thrown askew.

Brazil isn’t alone in casting light pollution on its coastal habitats, of course. Coastlines glow the world over. A similar global assessment performed by the University of Exeter in England found that among all tropical ecosystems, mangroves are seeing the biggest surge in exposure to artificial light.

The consequences of humans meddling with what are usually fairly balanced periods of light and dark in tropical habitats remain to be seen. Nevertheless, Freitas has an optimistic outlook since developing nations such as Brazil have a unique opportunity to be, well, enlightened about their futures.

*Correction: This sentence has been updated for clarity.