Bathynomus giganteus, pictured here, is perhaps the most famous of the giant isopods. New research on B. giganteus’s cousin B. jamesi is leading scientists to new insights into how these crustaceans have adapted to life in the deep sea. Photo by Disintegrator/Alamy Stock Photo

Survival in the deep sea is inherently challenging: darkness abounds, the temperature is near freezing, and food is hard to come by. And yet, rather than wither in the harsh conditions, many deep-sea animals, from massive spider crabs to giant squid, adapt by growing supersized, dwarfing their shallow-water or terrestrial kin. Why these animals get so big has interested scientists for more than a century. Now, by asking a slightly different question—how do they get so big?—scientists are getting closer to an answer.

A team of researchers recently sequenced the genome of the giant isopod Bathynomus jamesi—a first for a deep-sea crustacean. With round, segmented bodies, giant isopods look like roly-polies—except they can grow as long and as heavy as a chihuahua. The team behind the work, led by Jianbo Yuan, a geneticist at the Chinese Academy of Sciences in Beijing, hopes the details hidden in the animal’s genetic code will help us better understand what’s going on behind the scenes, genetically speaking, with deep-sea gigantism. 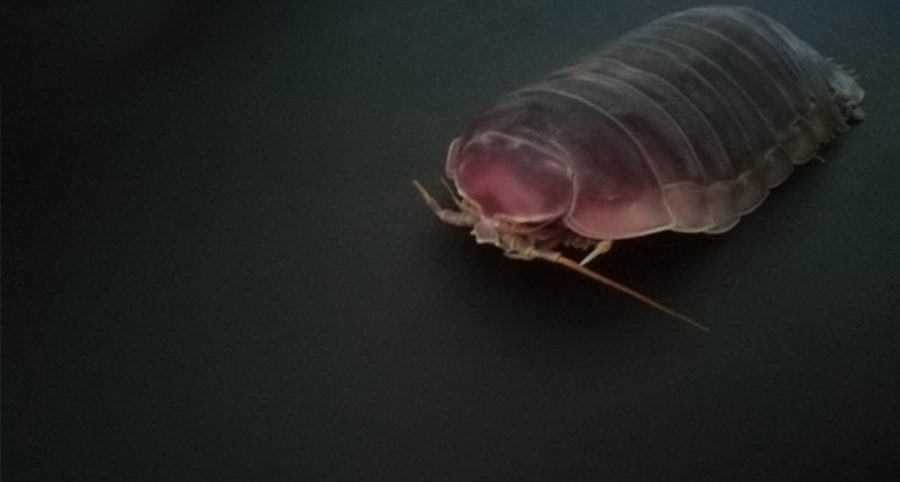 Analyzing Bathynomus jamesi’s genes hints at how this giant isopod developed the key adaptations that allow it to thrive in the deep. Photo by Jianbo Yuan and Xiaojun Zhang

Giant isopods, or bathynomids, are the jumbo cousins of the armored crustaceans found milling around under fallen logs. While the smallest isopod species measures less than half a centimeter, bathynomids can grow 80 times longer. The niches isopods occupy are similarly varied: there are more than 10,000 known species, and they’re found everywhere from the bottom of the ocean to caves to mountaintops. This physiological and ecological diversity makes the isopod family tree the perfect place to hunt for clues about what drives adaptation fathoms below.

Among the most interesting questions, says Yuan, is whether or not today’s deep-sea giants simply stem from hefty ancestors—animals like anomalocarids, large arthropod predators that existed some 50 million years ago—or whether they evolved more recently under the pressures of life in the deep sea. In the case of giant isopods, their genome points to the latter explanation.

Like their bodies, bathynomid genomes are incredibly large. B. jamesi, the researchers found, has a high number of so-called jumping genes, transposable elements that can move from one place in the isopod’s genetic code to another. Jumping genes are linked to high rates of mutation, something the researchers think may make the isopod better equipped to deal with environmental stress.

Having a large number of genes is something B. jamesi shares with other deep-sea invertebrates. That invertebrates—organisms generally considered to be less complex than vertebrates—have evolved some of the most complex, adaptable genetic codes has baffled scientists since genome sequencing began.

Beyond revealing the size of its genome, the scientists’ delving into B. jamesi’s biology and genetics have also suggested possible explanations for a number of key adaptations the animal harnesses to thrive in the deep.

B. jamesi’s stomach, for instance, can expand to take up two-thirds of its body. This ensures that, when it can find food, it can gobble as much as possible. Yuan and the team also found in B. jamesi’s genes changes related to thyroid and insulin function, which likely boost the isopod’s ability to grow and absorb nutrients. In addition, they found a tweak that slows the breakdown of fat. Keeping extra junk in the trunk lets giant isopods go years without eating.

Alexis Weinnig, a deep-sea biologist and geneticist at the Leetown Research Laboratory in West Virginia who was not involved in the study, says she likes that Yuan and his team are trying to better understand deep-sea isopods through their genes. Living in the deep sea, isopods are hard to find and harder to study in the field. “I think getting into the basic genetics is going to be a big player in understanding the underlying reasons for gigantism,” she says.

Weinnig hopes the finding reminds people that beyond their potential to help make sense of a scientific quandary, deep-sea species deserve the limelight.

“We lose track of how incredible it is that these animals live on our planet,” says Weinnig. “They have to be resourceful across the board … with reproduction, with metabolic processing. Everything has to be used so that nothing is going to scrap.”