On September 21, 2005, Rita became the fourth-strongest hurricane ever recorded in the Atlantic Ocean, with sustained winds pushing 300 kilometers per hour. The following day the storm shot straight for Cameron Parish, population 6,600, on the coast of western Louisiana. Kay Picou packed her four dogs into her Nissan Maxima and headed inland. She followed her husband Terry to her sister’s house in Lafayette, while Terry’s brother steered the couple’s 18-meter shrimping boat, Jennifer Kay, up the Calcasieu River to Lake Charles, about fifty kilometers from the coast.

It was a well-executed logistics dance, and similar steps were taken by others all along the western Louisiana coast as the storm drew near. The evacuation effort in this region was remarkable: not a single person remained in coastal Cameron Parish when Rita crashed ashore as a Category 3 hurricane at around 2:40 a.m. on September 24. 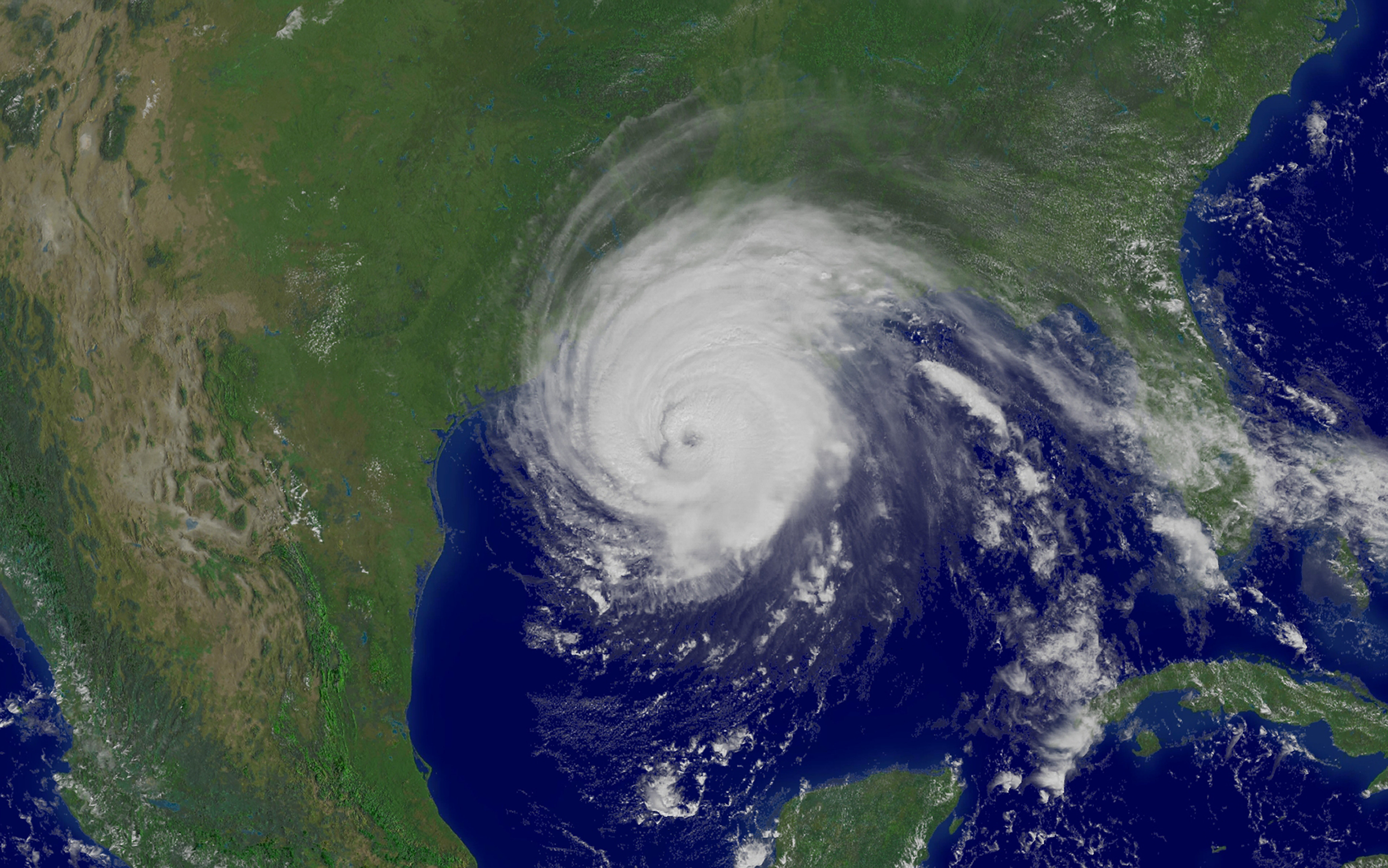 Hurricane Rita was the fourth-strongest Atlantic hurricane on record. Katrina, for comparison, was the seventh. Photo by NOAA/Corbis

In 2005, a record fifteen hurricanes formed in the Atlantic Ocean, killing an estimated 4,000 people. Yet just seven deaths were directly attributed to Rita, and of that number, only one life was lost in Louisiana. How was this possible?

For one, the storm was well-forecasted, and there was a coordinated response from multiple levels of government. But Cameron Parish residents like Kay and Terry Picou say they had another reason to flee: Katrina.

Just four weeks prior, the hurricane whose name is now synonymous with epic tragedy hit the eastern coast of Louisiana and crumpled New Orleans’ levee system, stranding tens of thousands of people in the flooded city.

“Pretty much everyone who evacuated in [the Cameron Parish] area will tell you they were motivated to do so by seeing the effects of Katrina,” says National Weather Service meteorologist Donald Jones. “I guess they were just scared; scared of what they had seen with Katrina and worried it could happen to them.”

One of the last people to leave Cameron Parish was Eddie Benoit, assistant director of the regional Office of Emergency Preparedness. Several days before the storm hit, his boss dialed the Governor’s Office of Homeland Security & Emergency Preparedness to declare an emergency situation and request resources, including National Guard troops to help handle the evacuation. School buses were made available to evacuate residents, but in this tight-knit rural community they weren’t needed. “Everybody here is kin to somebody,” says Benoit.

Before leaving themselves, Benoit and several deputies drove down to the Gulf. The road was already under water, and nearly two-meter waves were coming over the sand dunes. “My thought was, ‘we better get a good look at it now, because it’s not going to look like this when we get back,’” says Benoit. And it didn’t.

Before the evacuation, Benoit was also the principal of Cameron Elementary School. When he returned, the school had been destroyed—literally reduced to a pile of rubble. In nearby Holly Beach, a community of about 500 homes, not a single building was left standing. A nearly six-meter storm surge had battered the homes to bits and swept away the pieces. Fortunately, all of the houses had been empty. 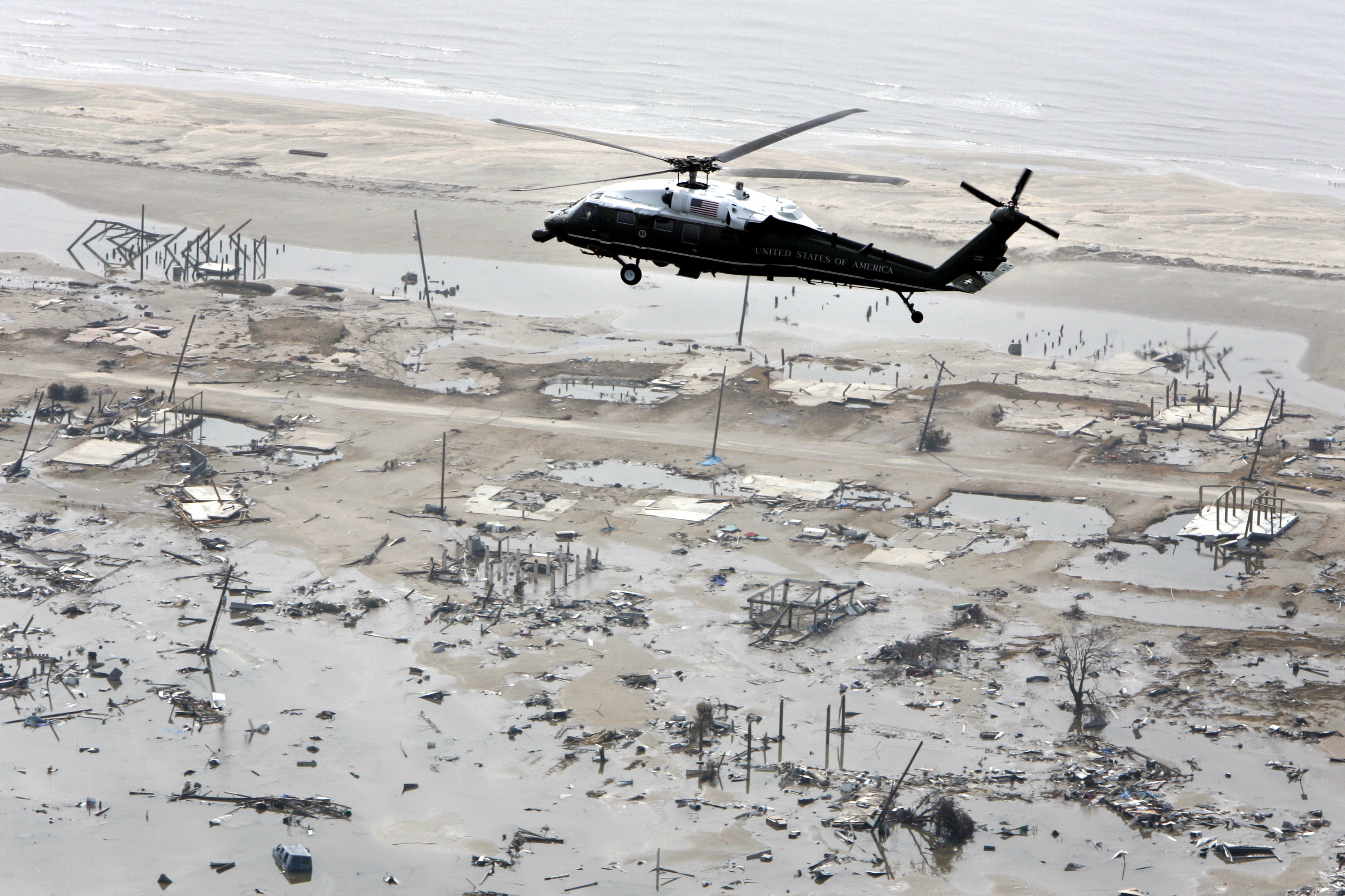 Passengers aboard the helicopter Marine One, including former US President George W. Bush, survey the damage caused by Hurricane Rita in coastal Cameron Parish, Louisiana. Photo by Jason Reed/Reuters/Corbis

Fear of Katrina may have pushed some people to leave, says Benoit, but he attributes the evacuation’s effectiveness to forecasting by the National Weather Service, which had accurately predicted the devastating storm surge, and efforts by his office and other local officials. “We were on TV, we were on radio, we were on every means available preaching evacuation,” says Benoit.

People are, in general, notoriously bad at assessing the risks posed by hurricanes. Too often, they second-guess the call for evacuation. The residents of Cameron Parish are no strangers to hurricanes, but this familiarity can also cause complacency.

In June 1957, Cameron Parish was hammered by Hurricane Audrey. “My father didn’t want to leave,” recalls 65-year-old Robert Broussard. Some 20 families huddled into his family’s attic. The storm surge swept the house off its foundation and floated it back and forth like a bath toy, until many hours later a tree crashed through the bedroom wall and pinned the structure to the ground. Miraculously, everyone survived.

Still, despite the experience, Broussard says that in the intervening years he has become accustomed to the storms. If Katrina hadn’t hit New Orleans, he probably wouldn’t have evacuated for Rita.

“We wouldn’t have left,” he says. “And we all would have drowned.”