Limpets are easy to overlook—so too is their effect on the environment. But careful consideration of how all the life forms in an area interact is key to understanding how ecosystems thrive. Photo by Rebecca Kordas/UBC

As the ocean temperature rises, it may be the little things that make the biggest difference to the survival and resilience of living things.

Take the limpet, a tiny snail-like gastropod with a hefty appetite for the minute plants that live in the intertidal—the space between low and high tide. In 2014, Becca Kordas, then a zoology doctoral candidate at the University of British Columbia, tested the effect these creatures have on the ecosystem when exposed to ocean warming. She found that their influence was huge.

Kordas launched her project by sinking four sets of settlement plates in the intertidal zone of Saltspring Island, British Columbia, about 55 kilometers southwest of Vancouver. For 16 months, Kordas and her colleagues tracked which plants and animals established themselves on the four different types of plots. Kordas controlled the limpets’ access to half of the plates, while they were free to graze on the other half. She also simulated the effects of ocean warming by tinting some of the plates black to attract the sun’s heat.

By the end of the study, the differences between the four sets of plates were stark. Kordas found that when limpets’ access is restricted, the artificially warmed intertidal ecosystem collapsed—the diversity of life largely replaced by a mat of microalgae. Limpets with access to the plates, however, maintained a healthier ecological community, even in a warming environment.

What is it about limpets that helps maintain a diverse and complex community, even when their environment warms?

Kordas says limpets eat huge amounts of microalgae, including microscopic diatoms and the spores of larger algal species. This clears the terrain for a variety of life. “When limpets are allowed in, they make space for things like barnacles, and then those barnacles in turn create little condos for other animals to live in,” she says. 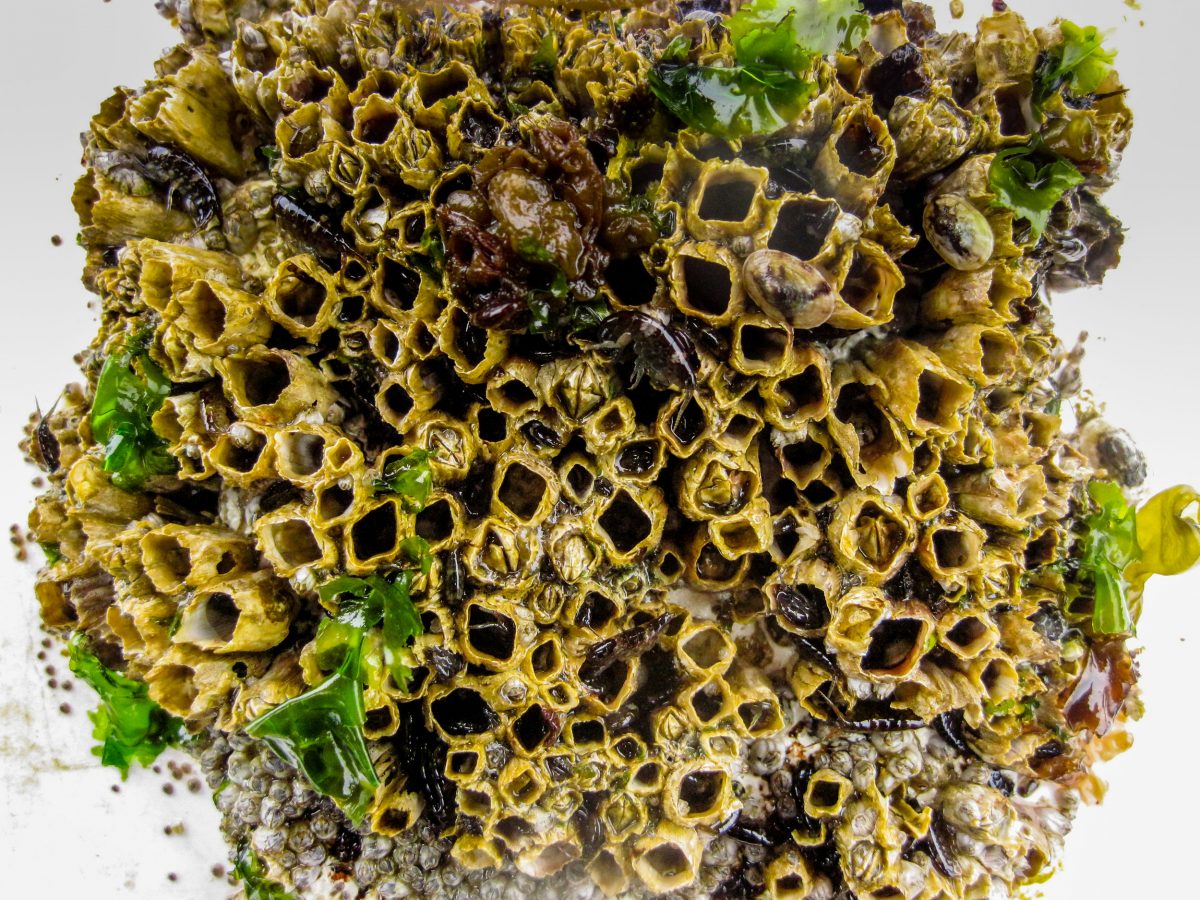 Limpets clear the land, making space for a range of other species to move in, including amphipods, tiny snails, red and green algae, and more. Photo by Rebecca Kordas/UBC

In a sense, limpets are tiny ecosystem engineers—a role they share with more well-known creatures such as elephants. Starfish also engineer their environment, devouring huge patches of mussel beds, creating openings for other animals and plants. And since the 1995 reintroduction of wolves into Yellowstone National Park, scientists think the consequent decline in elk browsing gave the park’s vegetation a boost, providing a cascading boon to birds and beavers.

The study comes at a critical time for intertidal life in the northeast Pacific Ocean. In this area, the summer low tide typically occurs around noon, which exposes intertidal species to warm summer temperatures. The heat shakes up the intertidal community, but shakes it up more without limpets around.

The lesson of Kordas’s study, however, is not about limpets per se. It’s about the need to better understand the role of every organism in an ecosystem.

Sarah Gilman, a biologist at the Claremont Colleges in California who did her doctoral dissertation on how limpets respond to warming seas, agrees. “The paper shows the importance of focusing on preserving the whole community, instead of targeting one or two species that you think are of economic importance, or that look important from a distance.”

Kordas says her results support the need to establish marine protected areas where ecosystem engineers will not get killed, collected, or fished out, and show the importance of biodiversity to future climate change resiliency.

“The message is to leave these communities intact,” she says. “That will help to protect ecosystems as we hammer them with warming, ocean acidification, and all these other things.”