Analysis at Topknot Lake and Little Woss Lake in British Columbia shows what the environment would have been like during the last ice age. Photo by Shanna Baker

As early as 18,500 years ago, the Americas’ first peoples spread south from Beringia, a now-sunken continent between Asia and North America. Inland travel was all but cut off by the massive Cordilleran Ice Sheet, which shrouded most of British Columbia, Yukon, and southeast Alaska in a thick layer of ice. But at its fringes, the ice sheet was melting, revealing a path of rugged islands and exposed coastline. People moved into this gap, slowly spreading down the coast in boats, following the “kelp highway,” and sojourning on islands along the way, such as Sanak and Kodiak in Alaska and Calvert in British Columbia. Now, researchers including Chris Hebda, an archaeologist at the Hakai Institute,* have identified parts of northern Vancouver Island in British Columbia as ice-free, human-friendly lands.

The evidence comes from Topknot Lake, located two kilometers inland on northwestern Vancouver Island, and Little Woss Lake, nestled among the mountains in the north-central part of the island.

Drawing on satellite imagery, elevation data, an understanding of how the sea level has changed over the past several millennia, the chronology of how vegetation changed through time, and the glacial extent, Hebda and his colleagues pinpointed the two lakes as places likely to yield the oldest environmental records possible.

“Lakes are a really good source of information about the past,” Hebda says. “You have sediments running off the hills, coming down and settling into the lake, so you get really even layers constantly being deposited over many thousands of years.”

The environment around Topknot Lake, British Columbia, 18,500 years ago wouldn’t have been much different from that of Beringia around the same time. Video by Shanna Baker

To reconstruct what the environment would have been like was not easy. The team hiked through swamp and thick bush, and then took two canoes out onto the water. Between the two canoes, they put a plank of plywood with a hole drilled in the center, into which they placed a tubed coring apparatus. One meter at a time, they pushed the tube down and collected sediment from the lakebed, eventually reaching the ancient clays and silts they were after.

Usually when studying old lakebeds, you’ll hit a layer of impassable glacial till, Hebda says. But at Topknot Lake, that never happened. The team kept digging deeper into the sediment—and deeper into time—until their equipment reached its maximum extent. “We just couldn’t go any further with what we had,” Hebda says. Most lake cores will range anywhere from two to seven meters long, Hebda says, but with Topknot, they recovered 11.25 meters of sediment. The fact that they ran out of equipment before they ran out of lake sediment to excavate made Hebda realize they had found something very old, and very exciting.

To analyze the sediments, the team washed them through screens and filtered out larger objects, such as pine needles, leaves, charcoal, and pieces of grass or trees, and calculated their ages using radiocarbon dating. Finding these items, Hebda says, can be very challenging. “I spent many hours looking under the microscope through all the sediments to find enough little pieces.”

The scientists also looked for traces of pollen and algae, which offered evidence of the types of vegetation that thrived in the area thousands of years ago. They also took their samples to the Lundbeck Foundation GeoGenetics Centre at the University of Copenhagen in Denmark where they used a new technique called sedimentary ancient DNA to get a more holistic picture of the ancient environment around the lakes. This method involves extracting small—and possibly broken—strands of plant, animal, and bacteria DNA from the sediments and then comparing them to a database of known DNA.

“The work that the Hakai group is doing is very progressive,” says Loren Davis, an archaeologist at Oregon State University who was not involved in the study. “It’s exactly the kind of stuff that we need in order to understand what the world was like early on along the Pacific Coast and what the potential parameters could be for understanding what the lives of people might’ve been like.”

From their research, the team discovered the area surrounding Topknot Lake was ice-free at least 18,500 years ago, and since they never hit the glacial till layer, Hebda says it’s also possible that the lake was never covered by ice. 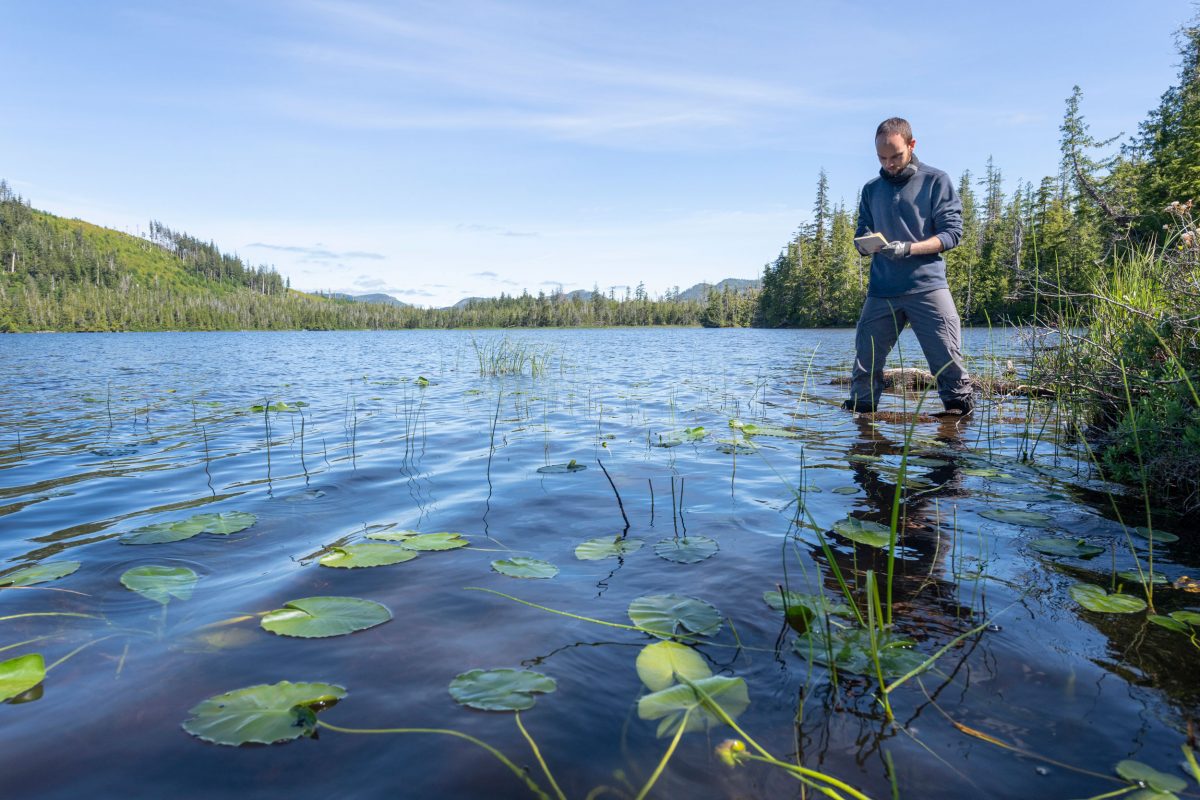 Researchers including Chris Hebda, an archaeologist at the Hakai Institute,* analyzed objects trapped in lakebed sediments, such as leaves, charcoal, and remnant bits of ancient DNA, to show that the environment around Topknot Lake, on Vancouver Island, British Columbia, would have been quite hospitable compared to the largely frozen mainland. Photo by Shanna Baker

Mikkel Winther Pedersen, a researcher at the Lundbeck Foundation GeoGenetics Centre who was part of the team, says it’s possible people may have ventured into the area before 18,500 years ago. “We know humans are in northernmost Siberia 30,000 years ago—we have direct archaeological evidence—so why should they wait 15,000 years before migrating across the Beringia land bridge into the Americas if they already walked from Africa to northern Siberia and adapted to those cold conditions?” What is missing, Pedersen says, is the evidence of that earlier arrival.

But that’s the view from Western archaeology’s focus on material remains.

The traditional stories of the Quatsino First Nation of northwestern Vancouver Island do tell of that earlier arrival. Quatsino hereditary chief Sonny Wallas (David Hanuse) says his people were in the area before the last ice age, and only survived it by going to Klaskino—an ancient village on the Brooks Peninsula about 50 kilometers southeast of Topknot Lake.

Wallas says he has heard two histories about the origins of the Quatsino people: that their earliest ancestors crossed a land bridge, and that their earliest ancestors were created from the land in North America. Wallas doesn’t know which to believe, but he wonders if the creation story of the grizzly bear might offer insight. He says the grizzly bear started off in the north and made its way south, along the coast, and taught eight tribes each how to speak a different dialect. “That’s why the way you say grizzly bear is the same word from up north to down south.”

For now, the physical evidence from Topknot Lake shows that the landscape 18,500 years ago would have been a treeless tundra—very similar to that in Beringia—with grasses, sedges, heathers, and sagebrush. The terrain was dotted with the cup-shaped blue and white flowers of Jacob’s ladder; dark purple, mealy-textured crowberries; and the spiky flowers of bistort. Many of these plants could have been used to make tools or as sources of food and medicine.

The data found at Little Woss Lake indicated a slightly younger history. Deglaciated about 14,000 years ago, this mountainous environment would have hosted alder and pine trees, ferns, grizzly bears, and chinook salmon, indicating a well-developed ecosystem that was suited to human occupation and that many people could have made their home.

Hebda says it’s important to dispel the notion that humans were racing to spread through the Americas and get down to the southernmost tip as fast as possible. “We’re talking about thousands of years and many, many lifetimes,” Hebda says. “The movements are more incremental … they’re just living their lives.”

This story has been updated with additional insight from Quatsino First Nation hereditary chief Sonny Wallas.