Seals from Canada’s eastern Arctic have so far managed to avoid the scourge of plastic pollution. Photo by Flip Nicklin/Minden Pictures

Whales, seabirds, turtles, crabs, and worms—all kinds of marine animals are afflicted with plastic pollution. But seals living in the eastern Canadian Arctic seem to have so far escaped this modern plight. When scientists examined the stomach contents of the Arctic’s ringed, bearded, and harbor seals, they found krill, fish, kelp, roundworms, and even rocks. But not plastic.

For a new study, Madelaine Bourdages, a graduate student at Carleton University in Ottawa, and her team dissected the stomachs of 142 seals, including 135 ringed seals, six bearded seals, and one harbor seal. The seal stomachs had been harvested and frozen by Inuit hunters in Nunavut from 2007 to 2019 as part of a previous study with Fisheries and Oceans Canada. “We were only looking for larger plastics that would be accumulated in the stomach, so that included anything larger than 425 microns,” says Bourdages, the lead author of the new study. That is, plastic pieces larger than a single crystal of refined sugar.

But slicing open defrosted stomachs, some over a decade old, is no easy feat—you need a strong stomach of your own. “Some of them had parasitic roundworms and those were a bit smellier than the others,” says Bourdages.

While 31 seal stomachs turned out to be empty, several were full of either tiny crustaceans called krill or small fish. Some had both. Ten had only roundworms while two had kelp. One particularly heavy stomach was brimming with three and a half kilograms of sand and rocks. Yet when the researchers sifted through these stomach contents searching for pieces of plastic, they couldn’t find any. 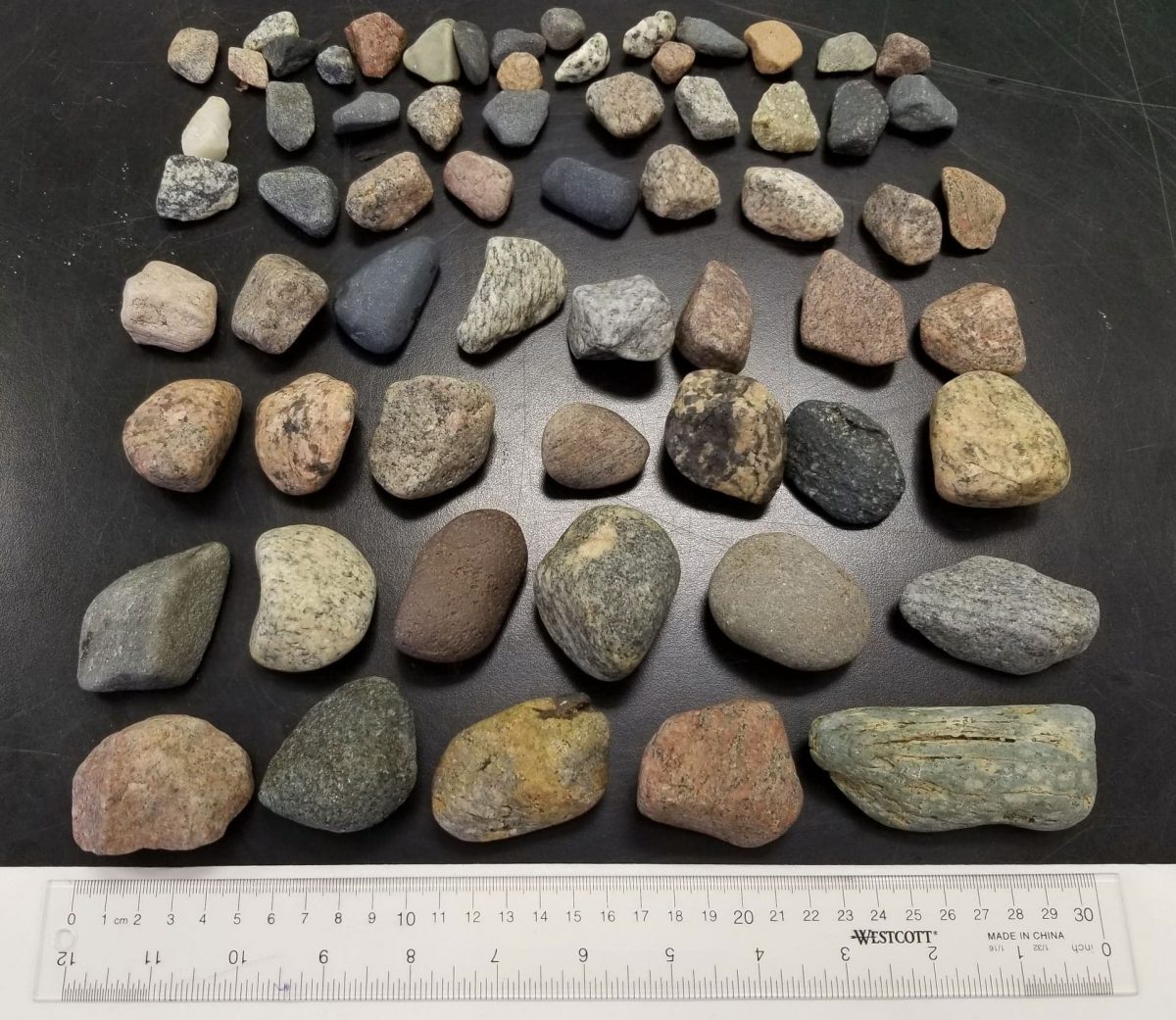 A vast quantity of rocks, but no plastic, was found in the stomach of one seal from Canada’s eastern Arctic. Photo by Madelaine Bourdages

Jan Andries van Franeker, a marine biologist at Wageningen Marine Research in the Netherlands, says the scientists could have gone beyond visual inspection* by dissolving the seals’ stomach contents in a strong base and examining the slurry for all remaining plastics. But even so, he’s not surprised there was no plastic in these Arctic seals. “In harbor seals from the polluted southern North Sea, we only found about 11 percent of stomachs with some plastic. The Canadian Arctic is a lot cleaner,” he says.

While it appears that Arctic seals are not ingesting, or at least not retaining, any plastics bigger than 425 micrometers, Bourdages and her colleagues have reason to believe that they might ingest smaller plastics indirectly from their prey. Previous studies, for instance, have found microplastics—plastics up to 5,000 micrometers in diameter—in polar cod, a common prey of Arctic seals. Studies have also detected microplastics and macroplastics in the stomachs, intestines, and scats of South American fur seals, northern fur seals, and gray seals of the Atlantic and Pacific Oceans.

And given how plastic has turned up in remote locations—from Antarctica to an uninhabited South Pacific island to the deepest reaches of the seafloor in the Mariana Trench—perhaps it is only a matter of time before it starts to accumulate in seals in the eastern Canadian Arctic.

Correction: This sentence originally said that by dissolving the slurry in a base it could reveal smaller pieces of plastic. This is inaccurate. Dissolving the stomach contents would instead reveal different types of plastics.