A baby sea turtle swims in the Gulf of Mexico. Photo by the University of Central Florida

Once newly hatched sea turtles crawl from the sand and escape into the surf, frantically flapping their flippers in a rush for the safety of the water, they disappear from human radar. After leaving the predator-rich shore, baby sea turtles swim for the open ocean. Often, they don’t return to the coast until two to ten years later. Until recently, what happened to turtles during these “lost years” was a mystery.

Finding seafaring young turtles is an arduous task—the logistics challenging, the expenses steep, and the clues few. But a slate of research projects using the latest in tracking technology is revealing not only where these turtles go, but also how they get there. In a new study, marine biologists Katherine Mansfield and Nathan Putman have shown for the first time that baby sea turtles actively swim their way to fertile grounds, rather than drifting wherever the currents take them. The discovery upends the long-standing assumption of how baby sea turtles get around.

A baby sea turtle swims with one of the researchers’ satellite tags on its back. Video by the University of Central Florida

Though scientists have previously shown that baby sea turtles are capable of swimming, this behavior was thought to be limited to the first 24 to 48 hours of turtles’ lives, which they spend in a “swimming frenzy” trying to get from the shore into deeper water. But the assumption was that after that initial burst, sea turtles relaxed and rode the waves.

“When we do find [baby turtles], they’re not swimming, they’re mostly perched on mats of brown algae called Sargassum. So, this is a very easy assumption to make,” says Mansfield. The new research, which used tags to track baby turtles, challenges this “passive migration” hypothesis.

Over a four-year period, Mansfield and Putman tracked 44 wild-caught sea turtles in the Gulf of Mexico. Just finding turtles to track, though, wasn’t easy. Baby turtles are incredibly hard to find—there’s a reason these are the “lost years”—but after a few years of practice the researchers had learned where to look: amid mats of Sargassum, or where different types of water collide.

With the wild turtles caught, the scientists fit them with tiny satellite tags. Baby sea turtles’ small yet fast-growing shells, however, mean that tags tend to fall off quickly. “A manicurist helped us solve this,” says Mansfield. Turtle shells, like human nails, are made of keratin, and Mansfield found that using a non-toxic nail enamel on a turtle’s shell helped keep the tag attached. Of the two species tagged—green and Kemp’s ridley sea turtles—green sea turtles, with their slippery backs, proved trickier to tag. Once attached, though, the small, customized, solar-powered tags stayed on the growing turtles for three to four months. 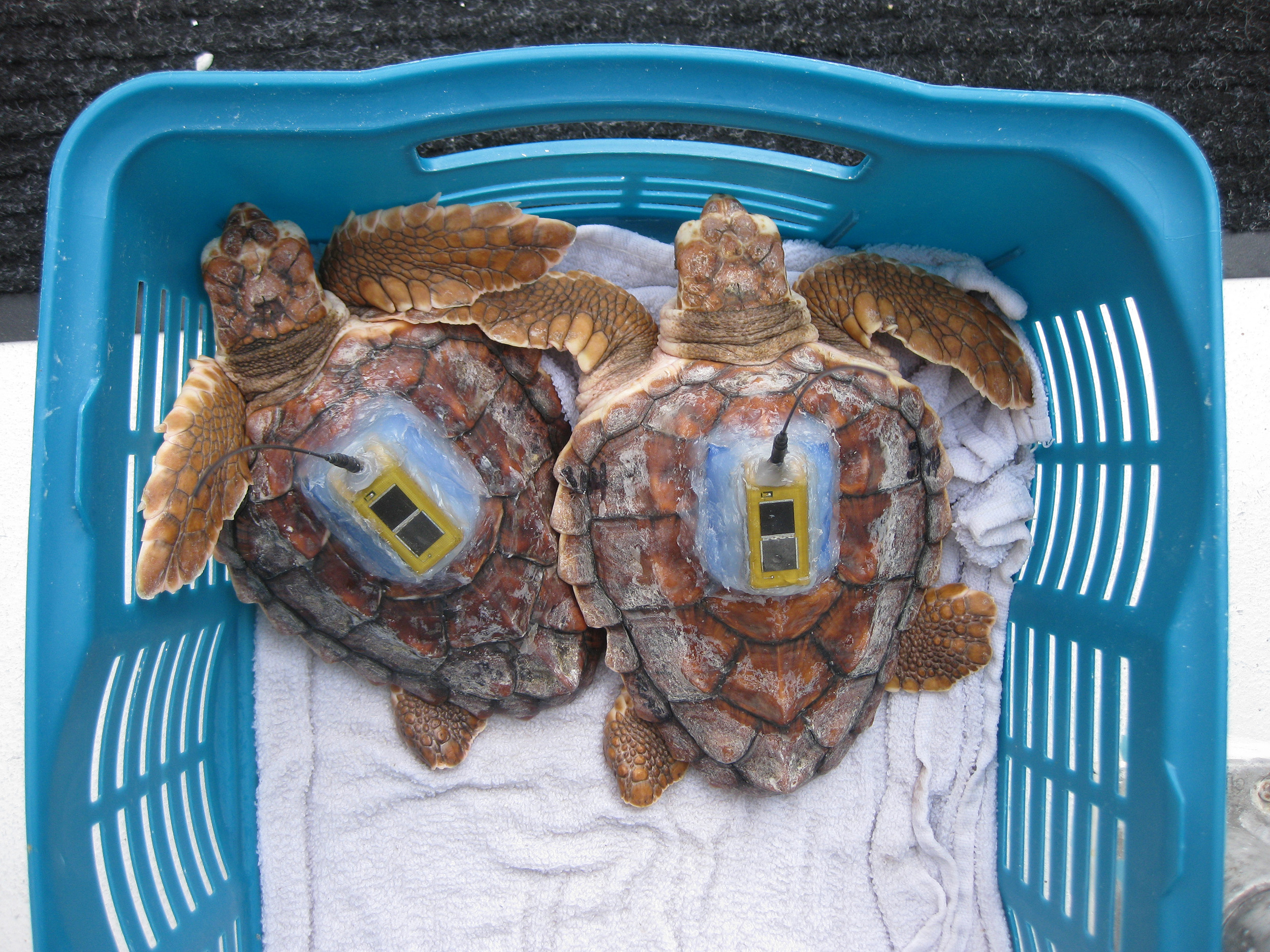 Two baby turtles are tagged with satellite transponders. Photo by the University of Central Florida

The tagged turtles were released into the Gulf at the same time as passively drifting buoys. Both were tracked by satellite. While the buoys behaved predictably, following the currents, the scientists found that the baby turtles moved off on their own.

“[The] differences in drifter [buoy] and turtle tracks were so visually apparent,” says Putman. “They often moved in completely opposite ways.” If the baby turtles had relied only on ocean currents, their speeds and paths would have matched those of the buoys. But after just a few days, gaps as much as 200 kilometers wide had opened between the two.

Not only were the turtles swimming, the two species were swimming in different directions and at different speeds. The green turtles were the more active swimmers of the two, and were set on going south, while the Kemp’s ridley turtles remained within the Gulf of Mexico.

Numerous environmental cues may be affecting the turtles’ swimming decisions, says Putman. Adult turtles use Earth’s magnetic field to know where they are on their migratory routes, and which way to swim to stay on course. Sea turtles can also use odors and visual information to locate prey and forage. “But, at what scale these orientation systems operate, to what extent they are learned or inherited, and what variation exists among individuals, populations, and species, remain to be answered,” he says.

To predict the dangers baby turtles might face, scientists need to learn more about their movements. Mansfield first tried to track small turtles in the Gulf of Mexico in 2010, in the wake of one of the largest marine oil spills in history.

“In [the] case of a catastrophe such as the oil spill, or changes due to fisheries and other human activities, will neonate turtles be drifting, stuck in an area? Or will they be more transient, swimming out of an impacted area? Will some species…swim out more than others?” says Mansfield. “We don’t know, but need to find out.”