Granny (also known as J2), the matriarch of J pod, breaches in the San Juan Islands in Washington State. At the time of her death, Granny was estimated to be 105 years old. Photo by Stefan Jacobs/Alamy Stock Photo

In late December 2016, Ken Balcomb of the Center for Whale Research in Washington State announced that the world’s oldest-known killer whale had died. Granny, or J2 as she is known in the whale research community, had not been seen since mid-October and her absence from her close-knit community led researchers to declare her dead. She was estimated to be 105, extremely old for any mammal.

Granny was the matriarch and most famous of the southern resident killer whales—an extended family of 78 whales in three pods: J, K, and L. In recent years, she was swimming in the lead of J pod virtually every time she was seen. The question of who will assume her leadership position holds more than just common interest: studies show that killer whale matriarchs play a crucial role in the cohesion and survival of their communities. “In killer whales, these old females are very important,” says Hal Whitehead, an expert in the study of whale cultures at Dalhousie University in Halifax, Nova Scotia. This complex social structure is also relatively unheard of. “To have these social systems where elderly, postmenopausal matriarchs have a vital role in the lives of their family members is very rare,” says Whitehead.

Researchers believe it is the knowledge these long-lived individuals have acquired over a lifetime of experiences that enables them to lead their relatives through tough times. Today, for instance, the life skills of older whales are vital since the population of chinook salmon that makes up 80 percent of the diet of these endangered whales has dropped to 10 percent of historical numbers.

Not only are postmenopausal female killer whales important as leaders, their presence is essential to middle-aged males. In a 2012 paper published in the journal Science, a team of international researchers used survival analysis to show that when a mother whale dies, the risk of mortality for her son increases three- to fourteenfold, depending on the son’s age, in the year following her death. (She bolsters his survival in a number of ways, including assisting in foraging and providing support during conflict.) Granny had no living offspring, but she was often seen in the company of a motherless 25-year-old male named L87, leaving researchers to wonder how her death will affect him as well as those in the rest of the pod that relied on her century’s worth of knowledge. 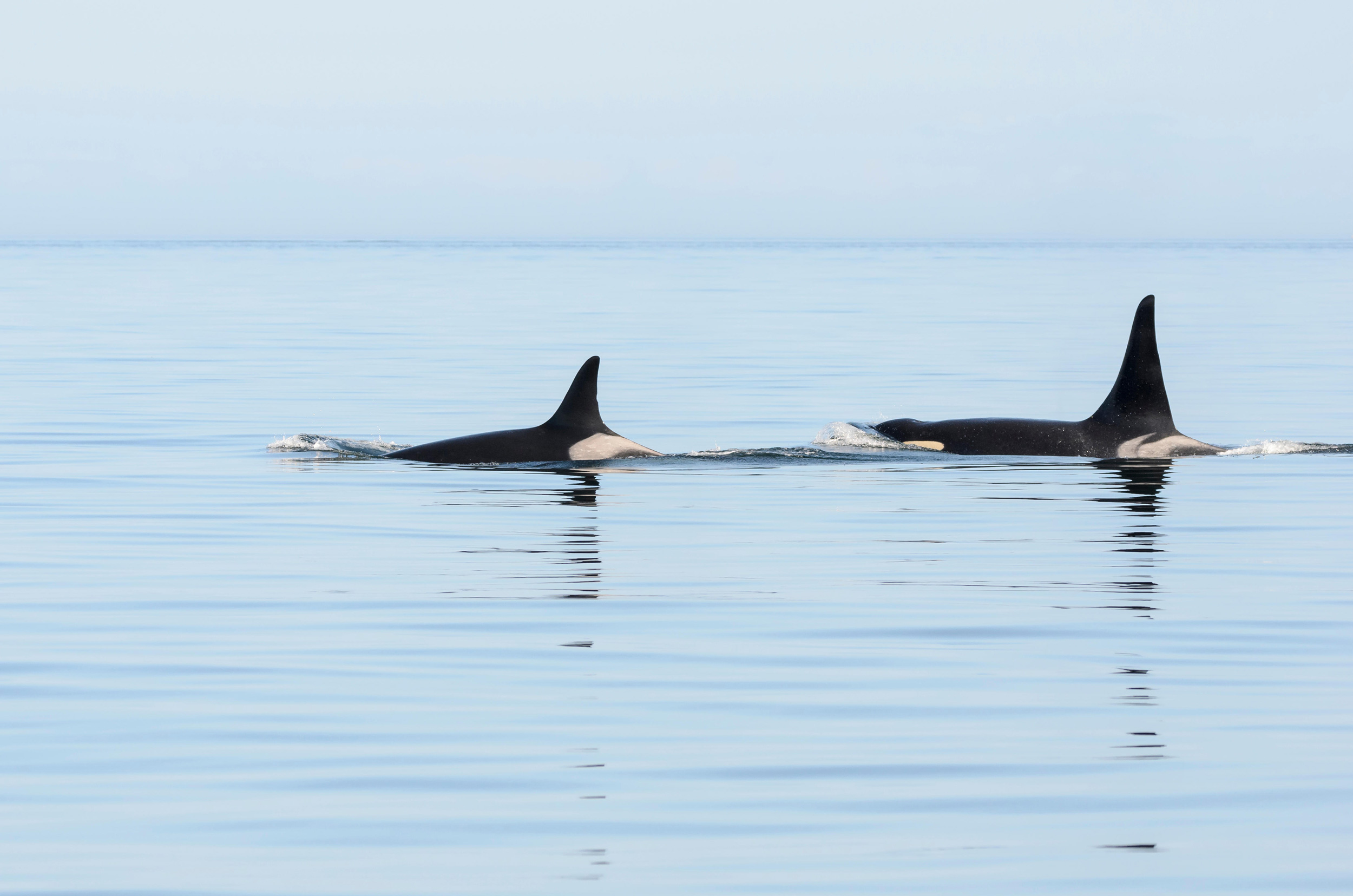 Granny played a leadership role in J pod and was most often seen swimming ahead of the other whales. Photo by Marli Wakeling/Alamy Stock Photo

Rich Osborne, a research associate at the Whale Museum in Friday Harbor, Washington, who knew Granny well, says, “Old female orcas probably have a lot of good ecological information that the rest of the pod depends on, but I am sure they have a way of passing it on,” adding that there are “a lot of old gals” quite capable of carrying on the role. Granny’s death leaves J16, age 44, as the oldest female in J pod. It’s unclear whether J16 will take on Granny’s role, or whether it will shift to an older female from one of the other southern resident pods. Osborne suggests they’ll sort it out much like people. “When someone dies, everybody shifts their power structure,” he says. “The same thing probably happens with killer whales. They’ll work out their politics the way they do.”

Fred Sharpe, a research biologist with the Alaska Whale Foundation who often works in the Pacific Northwest, says, “I think we should sing [Granny’s] praises, just as we would do for any elder.” But, with the state of this endangered group of killer whales so precarious, Sharpe says this is also a fitting moment for us to redouble efforts to reduce the noise and chemical pollution that threaten Granny’s surviving family members, and to continue the trend of removing dams and other constrictions to fish. Sharpe explains that in coastal Washington State alone, over 6,000 revetments—dykes and other fortifications—have been removed in the past decade and a half, opening up thousands of kilometers of new spawning habitat. “Things are turning around.”

On January 9, 2017, environmental groups filed a notice asking a US federal court to halt infrastructure projects on four lower Snake River dams in Washington State. A pending review could determine that the dams need to come out to help salmon. This, in turn, would help the killer whales that depend on them.

Protecting the whales’ marine habitat from the onslaught of noise and disturbance from boat traffic is also key to the future of Granny’s descendants. On January 12, 2017, the US National Oceanic and Atmospheric Administration filed a request for public comments on a petition calling for a whale protection zone on the west side of Washington’s San Juan Island to minimize vessel impacts on the southern residents. Whether or not these actions were spurred by the outpouring of affection following the passing of the world’s oldest killer whale is uncertain. But taking tangible actions to return vital southern resident habitat would lend meaning to Granny’s life and her death.