Alternately lashed by waves and exposed to air, shorelines are part land, part sea. Straddling both realms, coastal ecosystems are vulnerable to damage from human activities on land and in the ocean. Until now, though, researchers had an incomplete picture of how we collectively affect these environments because past studies have focused on either terrestrial- or marine-based impacts individually.

To better assess how humanity is altering the world’s coastlines, conservation scientist Brooke Williams, a PhD candidate at the University of Queensland in Australia, and her colleagues undertook the Herculean task of digitally stitching together two existing maps that separately show how our activities affect land and water. The data sets underpinning those maps include activities as diverse as farming upstream valleys, road building, marine shipping, and commercial bottom trawling. The finished hybrid map shows more than one million kilometers of coastline worldwide, with only the shores of Antarctica and inland seas omitted. 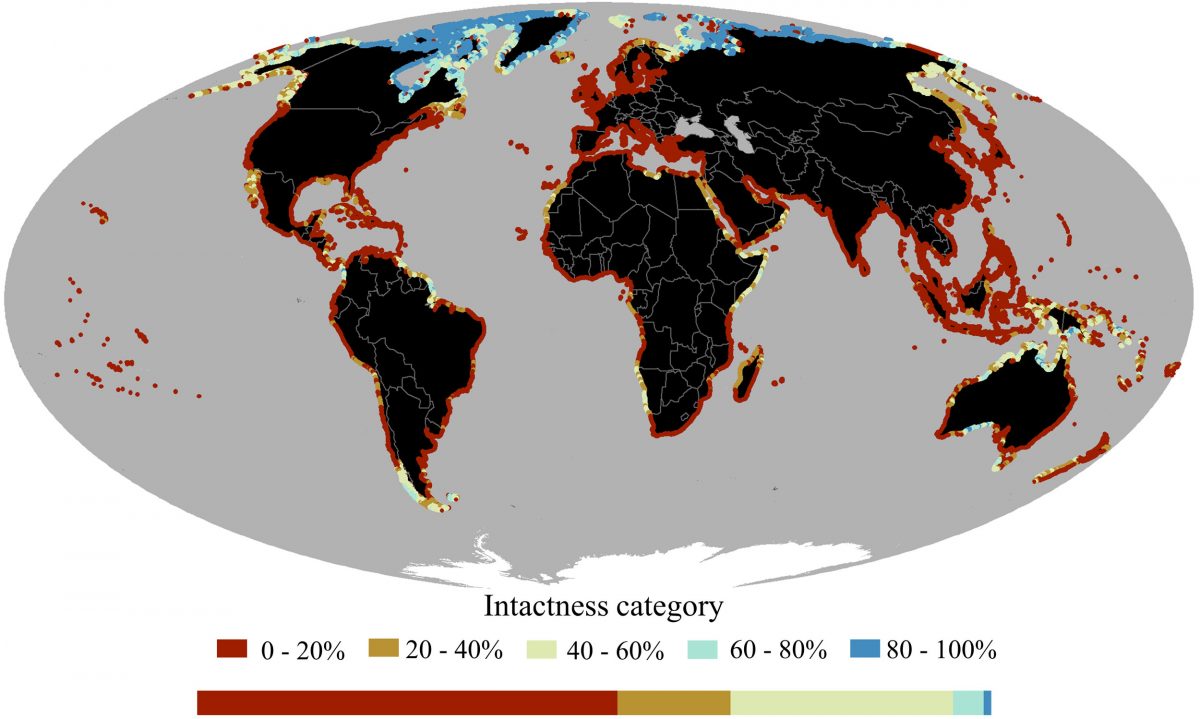 Williams was surprised to find that no coastal region in the world is totally free from direct human influence. The team observed that only 15 percent of coastal regions experience low human pressure. They’re nearly all in Canada, Russia, and Greenland, where remoteness and harsh winters have inhibited development. More than half of Canada’s coastline—almost 61,000 kilometers, or a distance equivalent to one and a half times around the globe—is relatively unaltered. But the coastal ecosystems of 26 other countries have been completely degraded. Many of these are island nations, such as Singapore, Dominica, and Aruba; others are mainland countries in Africa, Asia, and Europe.

The situation is most dire for the world’s seagrass meadows, savannas, and coral reefs. Approximately three-quarters of each of these habitats are highly disturbed, meaning the species that live there, such as the reef-dwelling bumphead parrotfish, are declining or disappearing. More than 50 percent of seagrass beds are entirely degraded.

The world’s coastlines are likely in even worse shape than the research suggests, Williams cautions. The team used the most complete data sets available, but the information is nine years old and does not include the impacts of climate change.

Still, the new map identifies extremely degraded areas, says Williams, adding that coastlines provide food, storm protection, and tourism revenue that many communities rely on. Restoring some of these areas could greatly benefit both people and biodiversity, she says.