Some of the most threatened ecosystems on the planet—coral reefs—could use a break. Indiscriminate fishing, pollution, and coastal development have battered coral reefs for decades. Throw in climate change and by 2100, 70 to 99 percent could be damaged or lost. With them goes food security and livelihoods, biodiversity and beauty.

But researchers behind a new study find hope in coral connectivity. Through modeling analyses, they identified six major reef networks around the world that could maintain and regrow coral even after mass bleaching, as long as sections of them fall within climate refuge zones—areas of the Earth that are more resilient to environmental stressors like acidification and rising temperatures.

The largest of these reef complexes—like submerged island chains biologically linked by ocean currents—spans nearly 1.8 million square kilometers, which is almost the size of Mexico. It encompasses the Great Barrier Reef and Coral Triangle, the latter including reefs of the Philippines and Indonesia. Other major systems lie in the Caribbean and Red Seas, along eastern Africa, and around Fiji. 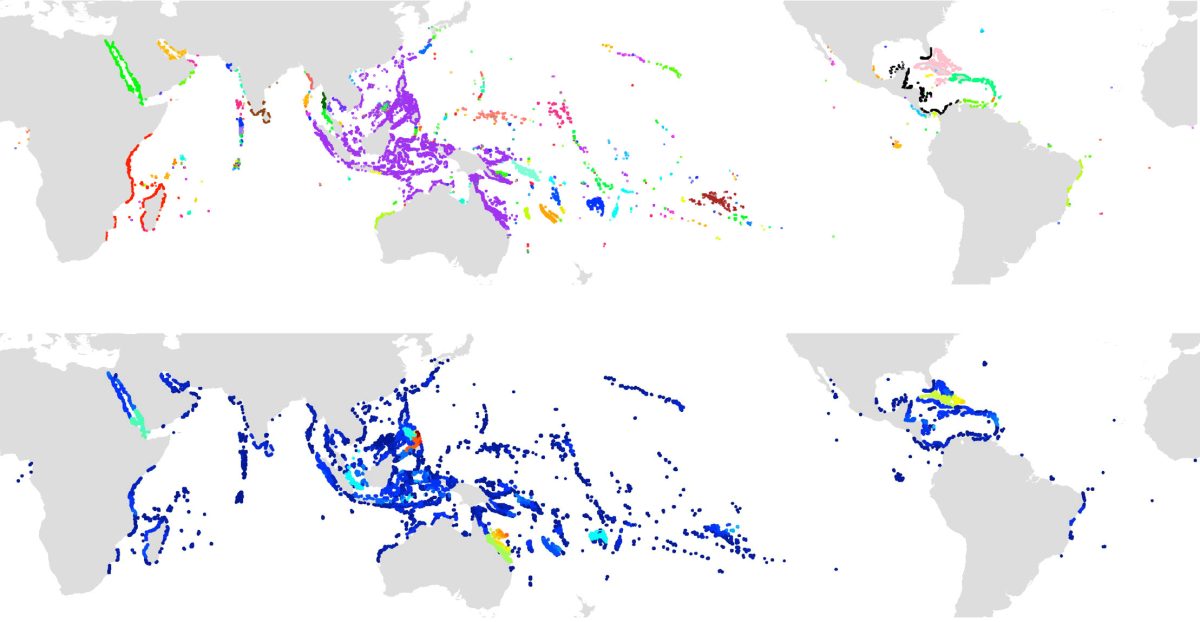 The largest reef networks (see the top map) were found in the Great Barrier Reef and Coral Triangle (purple); the Caribbean (pink, black); the Red Sea (green); eastern Africa (red); and near Fiji (dark blue). The warmest colors in the bottom map indicate the best source reefs, or those that send coral larvae to the largest number of other reef sites. Map by Greiner et. al.

To determine which reefs were connected into networks, the study relied on a global model of dispersal that estimates how coral larvae travel on ocean currents and replant themselves in new homes. The researchers then ran three climate scenarios to simulate various levels of coral bleaching and subsequent recovery.

In the most likely climate scenario—wherein nearly one-third of the world’s coral persists after a bleaching event because it’s sheltered by refuge zones—the surviving coral can go on to reseed surrounding reefs, helping a large reef network bounce back.

But while these complexes seem to have a knack for dispersing larvae within their own neighborhoods, the study finds that they’re not so great at sending larvae outside their networks, says University of Toronto PhD candidate Ariel Greiner, who led the research. Like a community rebuilding after disaster, these reefs might not have the ability to assist places farther afield.

The other two simulations, which wiped out coral in climate refuges, showed that global reef networks would break down, but that surviving coral could still spread larvae after bleaching, just to smaller reef systems. This indicates that in addition to targeting coral in refuge zones, conservationists should also prioritize reefs that are good at scattering their larvae, Greiner says. If enough of them are identified and preserved, they could serve as stepping stones for coral to spread to other areas.