The people of Lamalera, Indonesia, rely on the sea for survival, and sperm whales are their primary targets. Photo by Claudio Sieber

In the village of Lamalera, perched along the steep, rocky skirt of a mountain on the shores of the Indonesian island Lembata, locals have a taste for some of the ocean’s biggest beasts. Primarily from May through October, during the season known as lefa, men pick up their harpoons and head to sea, on the lookout for the telltale spout of their favorite prey: sperm whales. The community of several hundred households may catch as few as none or as many as 40 sperm whales in a year; the fishermen also drag many manta rays and the occasional killer whale, pilot whale, porpoise, dolphin, or shark back to shore. Once a successful sperm whale hunt is over, the meat is divvied up between dozens of families according to long-established protocols.

Claudio Sieber, a nomadic photographer originally from Switzerland, spent two weeks observing the villagers’ almost-daily pursuit of whales. “I ventured to remote Lamalera—which has been shaped by Catholicism, Japanese occupation during the Second World War, the arrival of a road, and some other modern conveniences, such as reliable electricity—to understand how they keep their age-old tradition of whaling alive,” he explains. “To many people, the idea of killing a whale causes distress. But the hunt remains important for day-to-day survival in Lamalera and is a source of pride and identity.”

Villagers have faced opposition from conservationists worried about overexploitation, but for now, with the Indonesian government’s permission, the annual whale hunt carries on in the Savu Sea, within a migratory route for sperm whales, much as it has since at least the 1600s.

For more background on the Lamalera whale hunt, we recommend “A Whaling Life Under Threat” by the New York Times and “Hunting whales with rowing boats and spears” by BBC News Magazine. 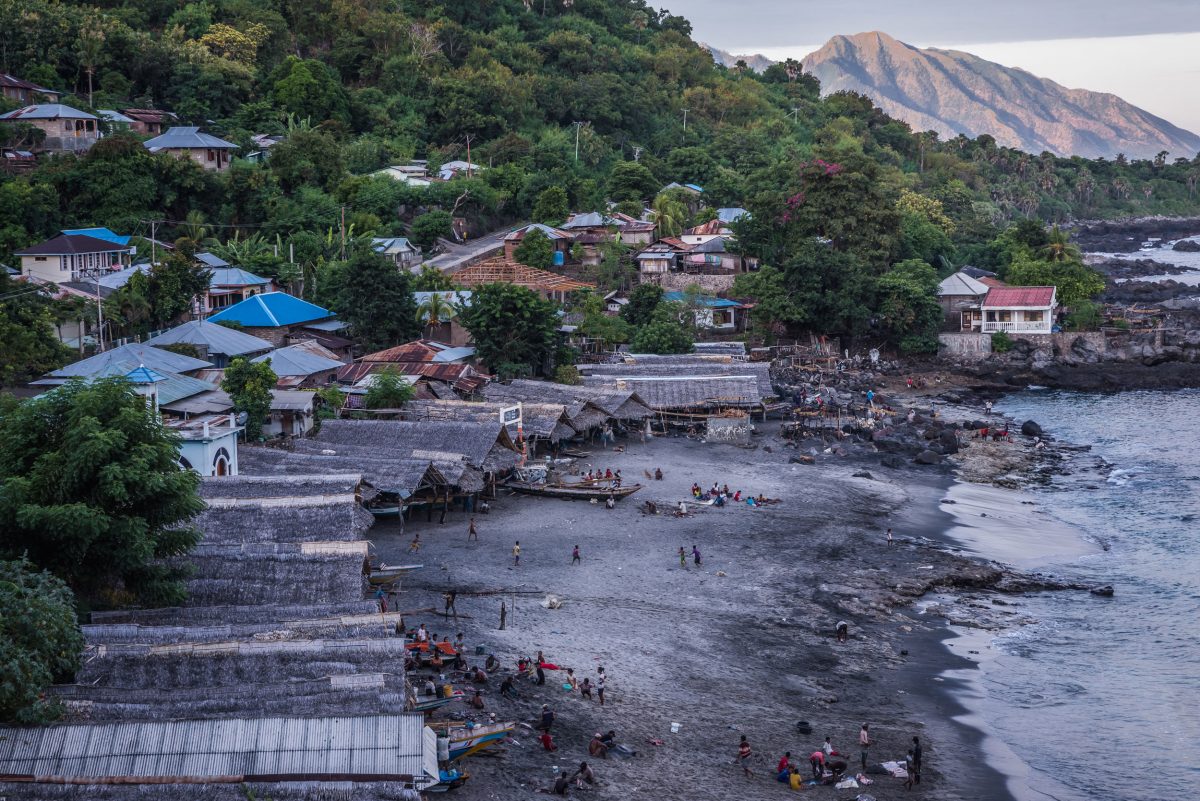 The rocky land around Lamalera, on the southern shore of Lembata Island, is unsuitable for most crops. Villagers trade meat from the sea for bananas, manioc, rice, maize, and other agricultural products grown by inland communities. 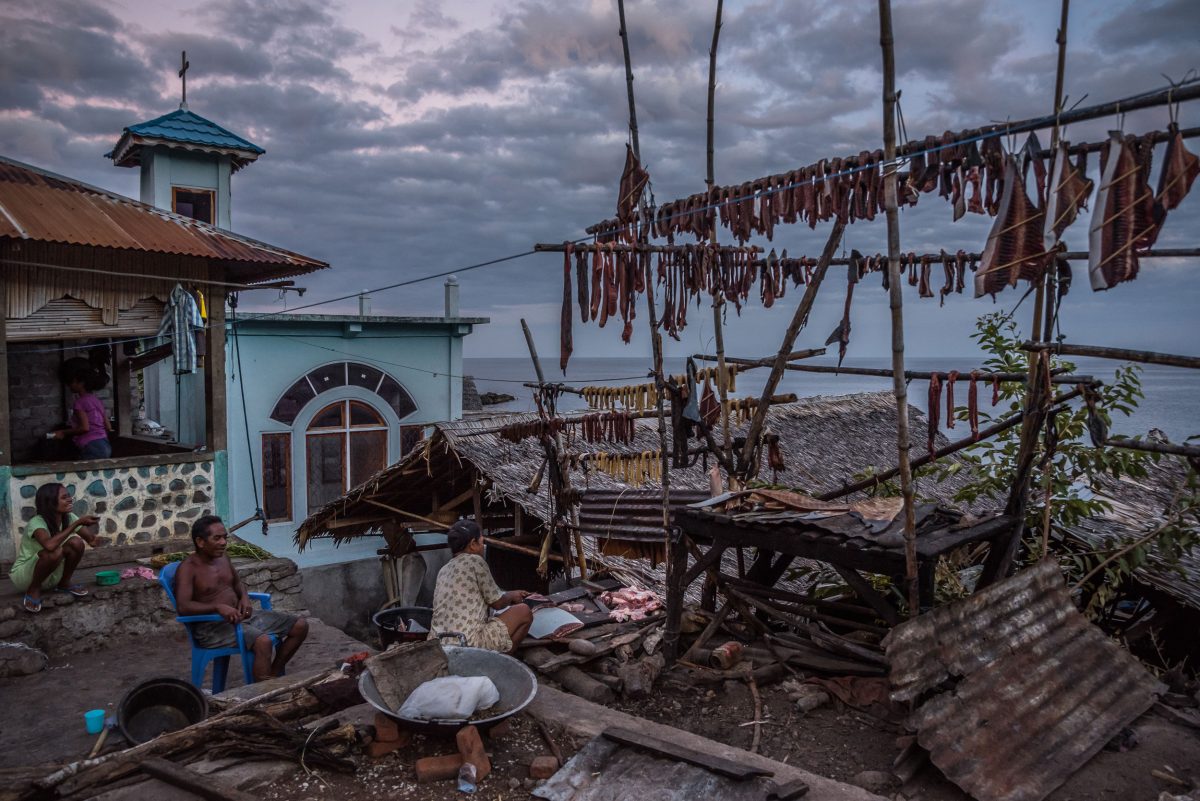 The people of Lamalera live a modest, subsistence lifestyle. Usually, a family of five or six shares a small home, furnished with only a couple of plastic chairs. Within their yards, blackened bits of whale or pale-yellow manta ray meat hang out to dry in the sun. “When you witness a young boy mixing coffee into his rice from yesterday, so that it’s not too dry to eat, it changes your perception of what you’ve thought was a simple life,” says Sieber. Villagers balk at the government’s efforts to conserve manta rays: “We don’t follow those rules,” the village chief told Sieber, “because this is about survival. We couldn’t get through if only relying on the whales.” 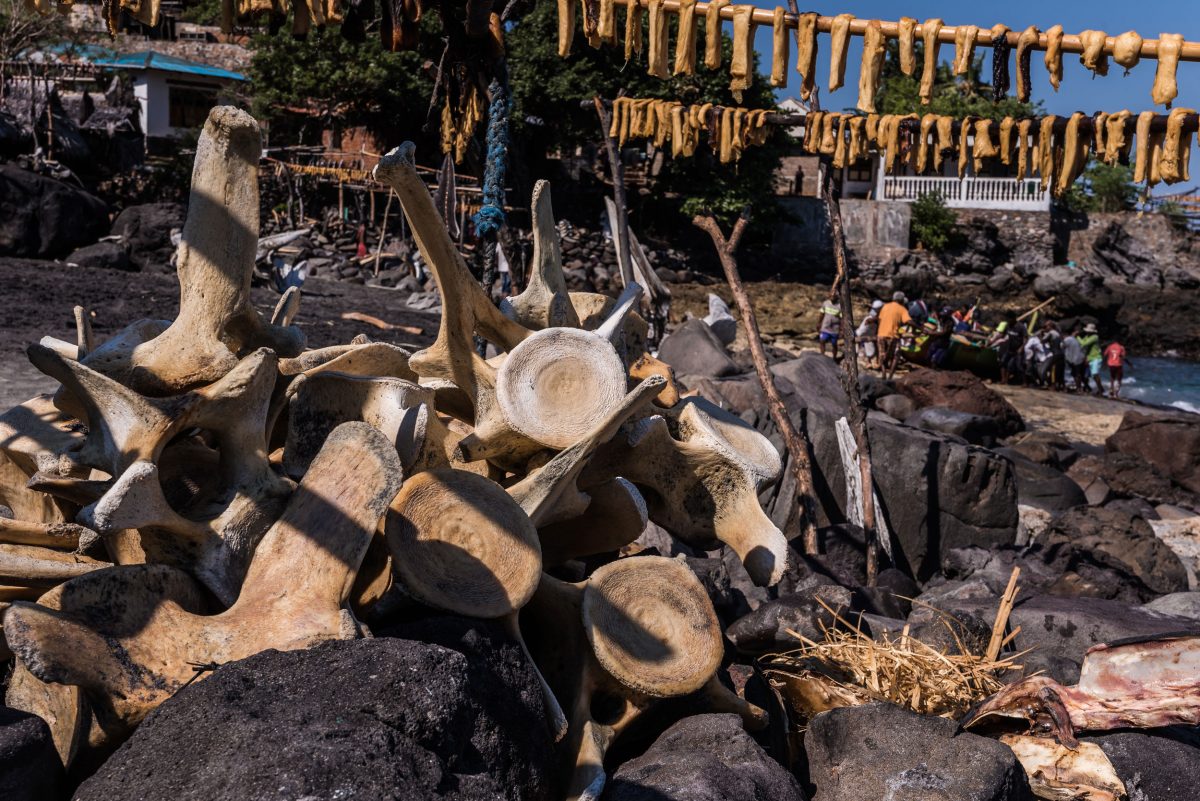 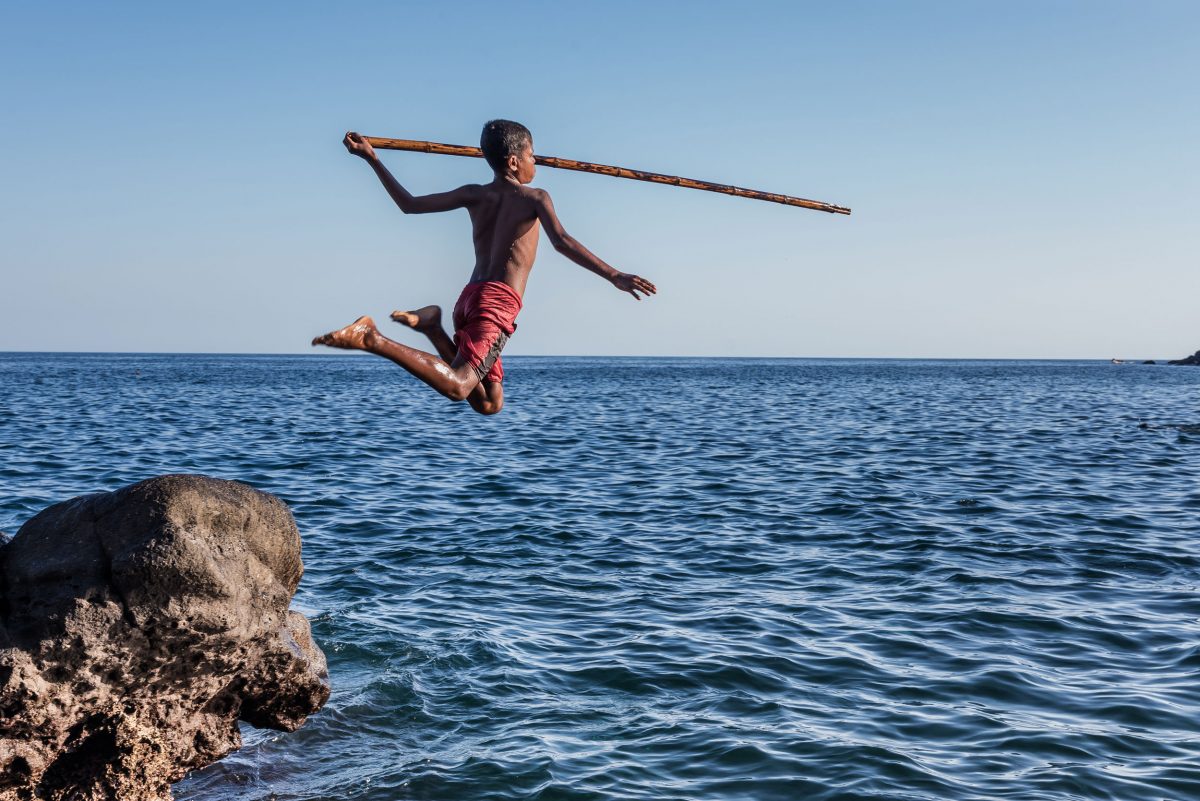 A 12-year-old boy launches into the air to spear an imaginary whale, practicing for a future hunt. Many boys in the village say they dream of becoming whalers. When not practicing hunting skills, they can often be found paddling around on foam blocks or surfing on wooden planks. 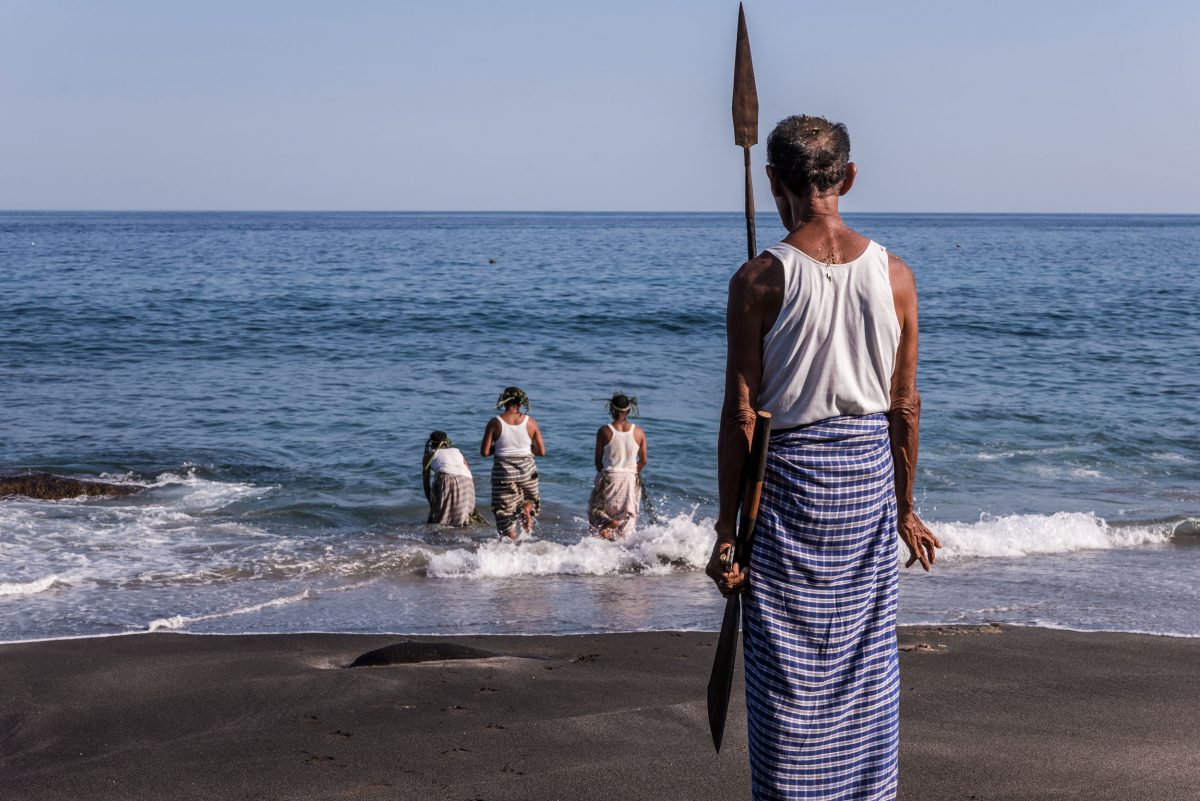 Though Lamalera has been a Catholic village since Dutch missionaries arrived in the late 1800s, villagers still observe some traditional animist customs. At the outset of the whale hunting season, select men sacrifice a chicken at the top of a mountain at a sacred stone. Then, they harvest vegetation from plants and trees believed to bear the whale spirit and release it into the surf. If they fail to catch any sperm whales within a few months, they may repeat the ceremony. 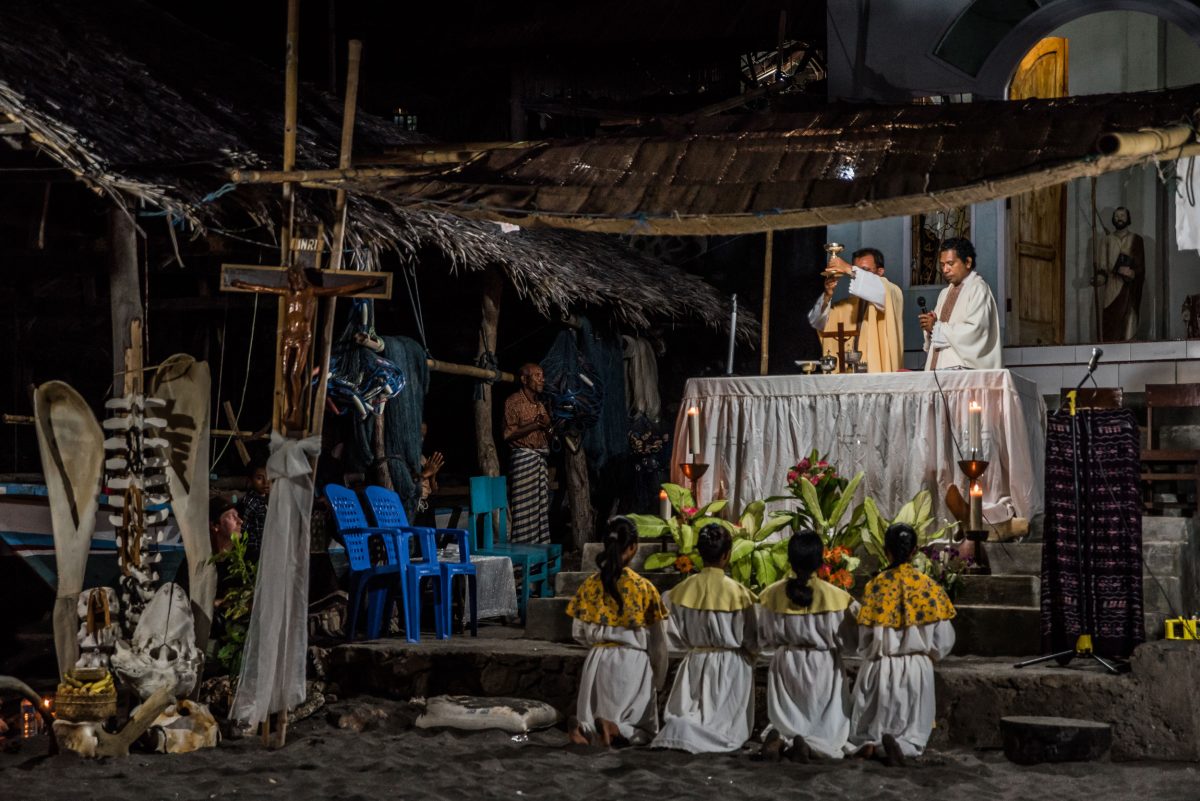 Following the animist ceremony, villagers gather at twilight for Catholic mass at a tiny chapel on the beach adorned with polished whale spines and a skull, which had to be carried by no less than a dozen men. During mass, the priest acknowledges fishermen who have died on duty over the years, and then parishioners light small lanterns that they float out to sea as offerings to their ancestors. 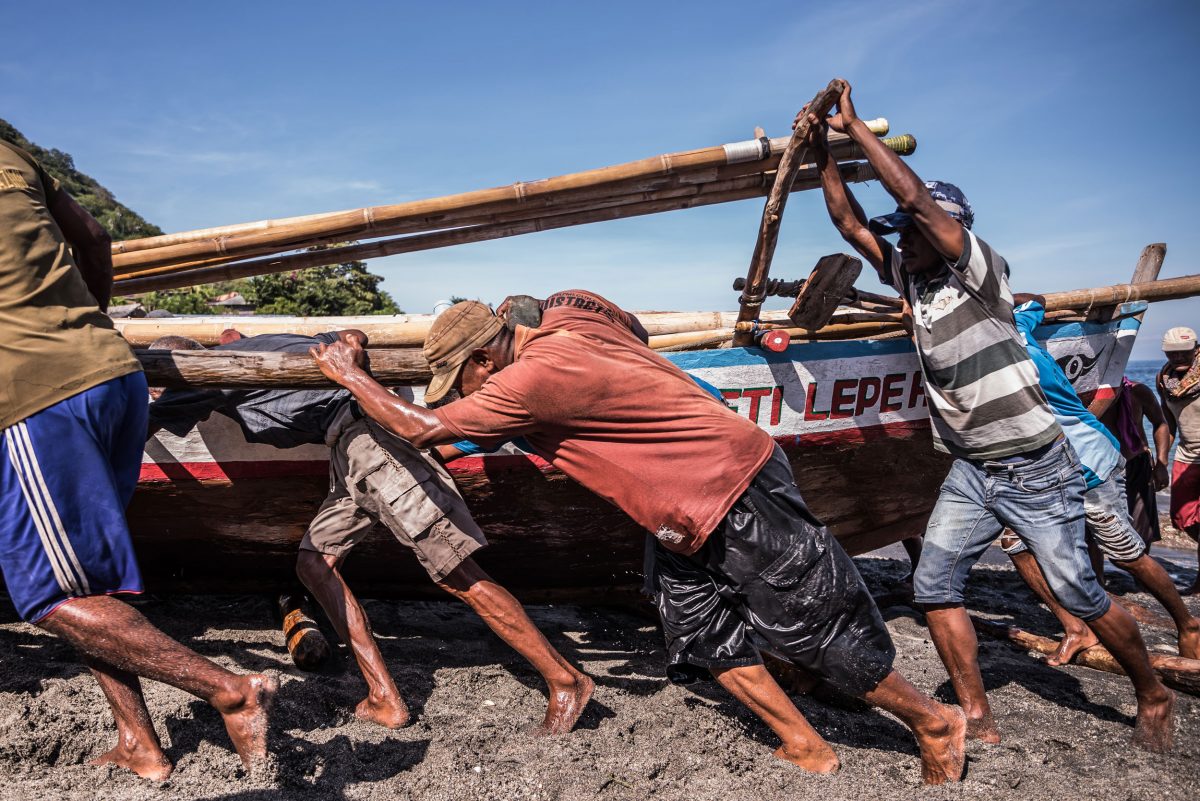 On the count of “satu, dua, tiga,” the crew pushes a fishing boat out of its shed and down to the sea. Boat sheds line the full width of the beach, housing some 14 traditional wooden boats called paledangs and 20 powerboats. 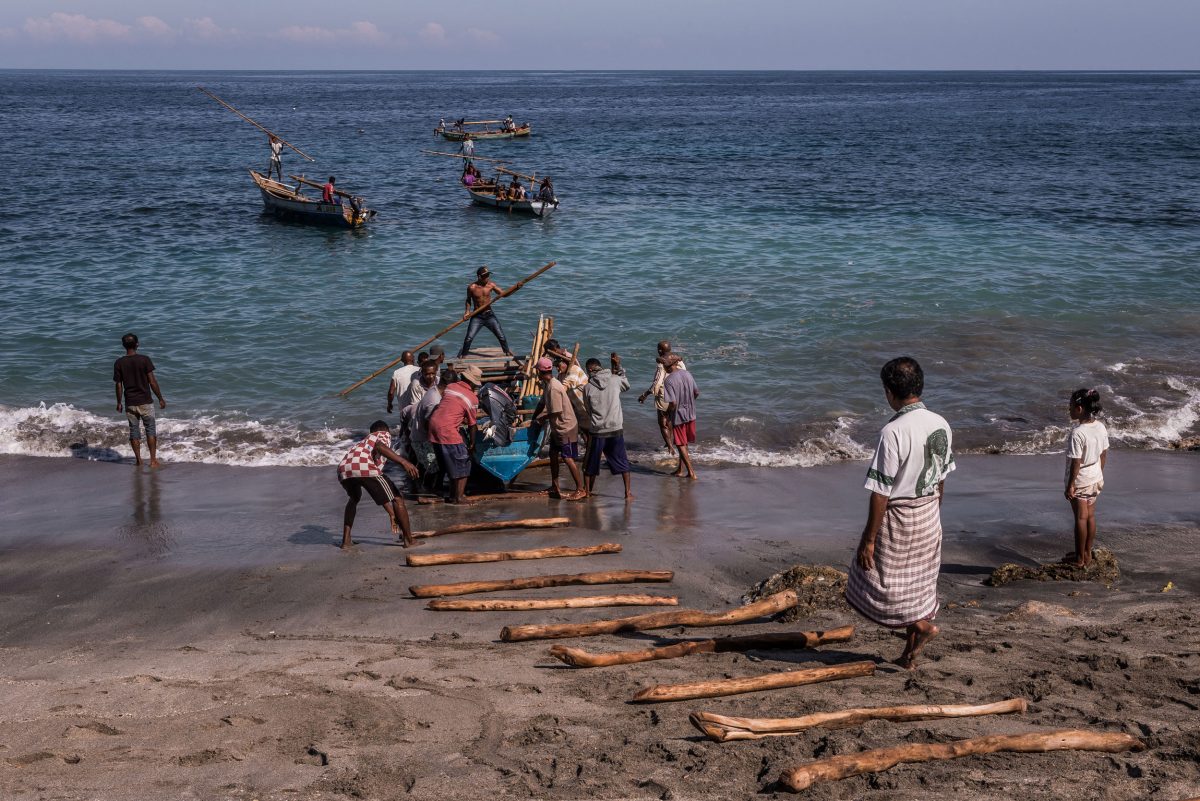 Every day except Sunday during the whaling season, fishermen depart around 6:00 a.m. and return in the late afternoon—sometimes with a whale, sometimes with a consolation catch. 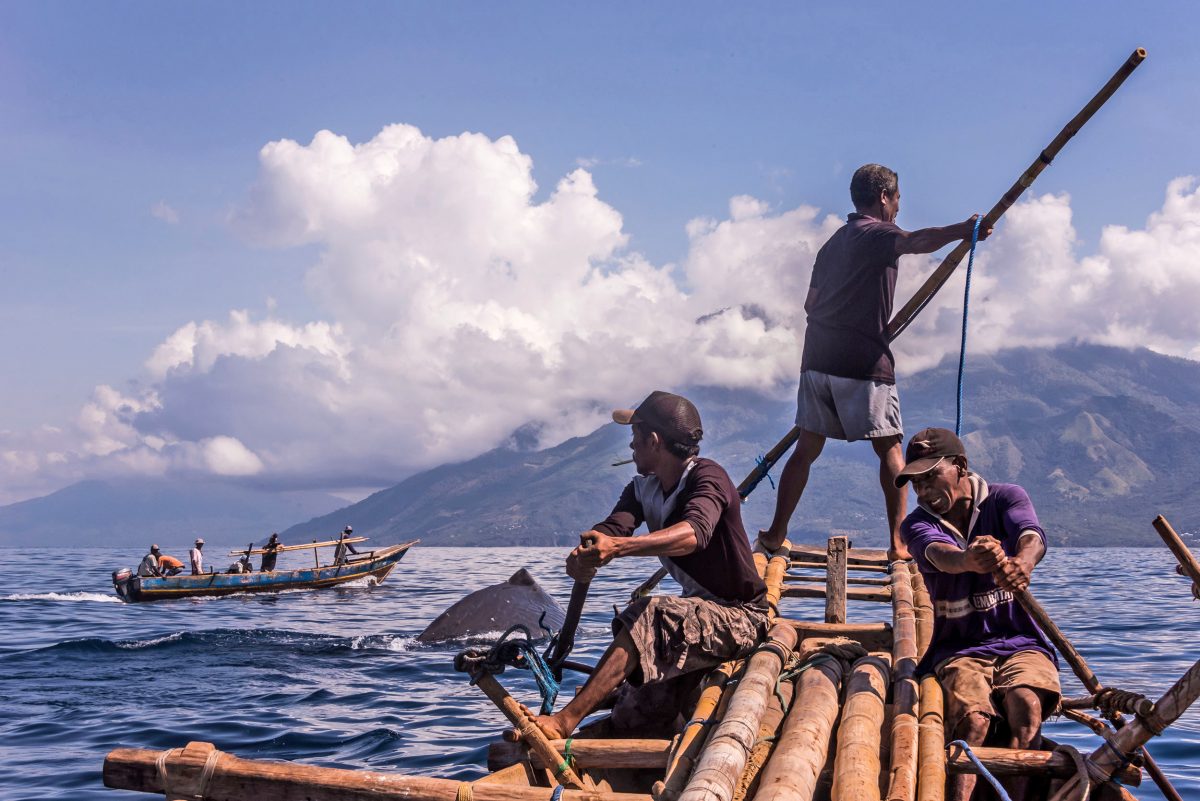 A whale hunt is conducted from a paledang, which is generally towed out to sea by the powerboats called jonsons after Johnson brand outboard motors. When the paledang is close enough to a whale, the whaling crew drops the tow rope and paddles into striking position. 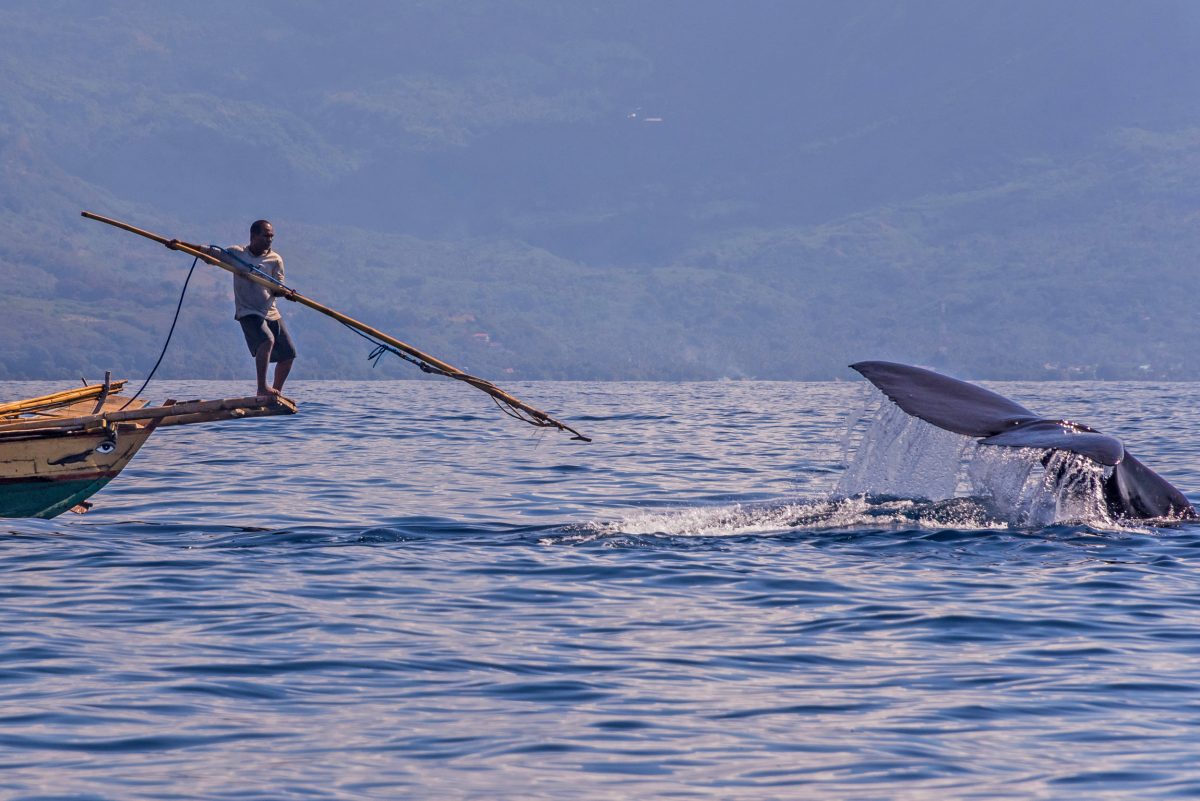 A young member of a whaling crew, which typically includes roughly a dozen people, often starts off as a spotter or water bailer, with the hopes of eventually earning the esteemed position of lama fa—lead harpooner. Petrus Glau Blikolulong, “Papa Petro,” shown here, has been a highly respected lama fa for 21 years. A lama fa shoulders a weighty responsibility—his community depends on his success. 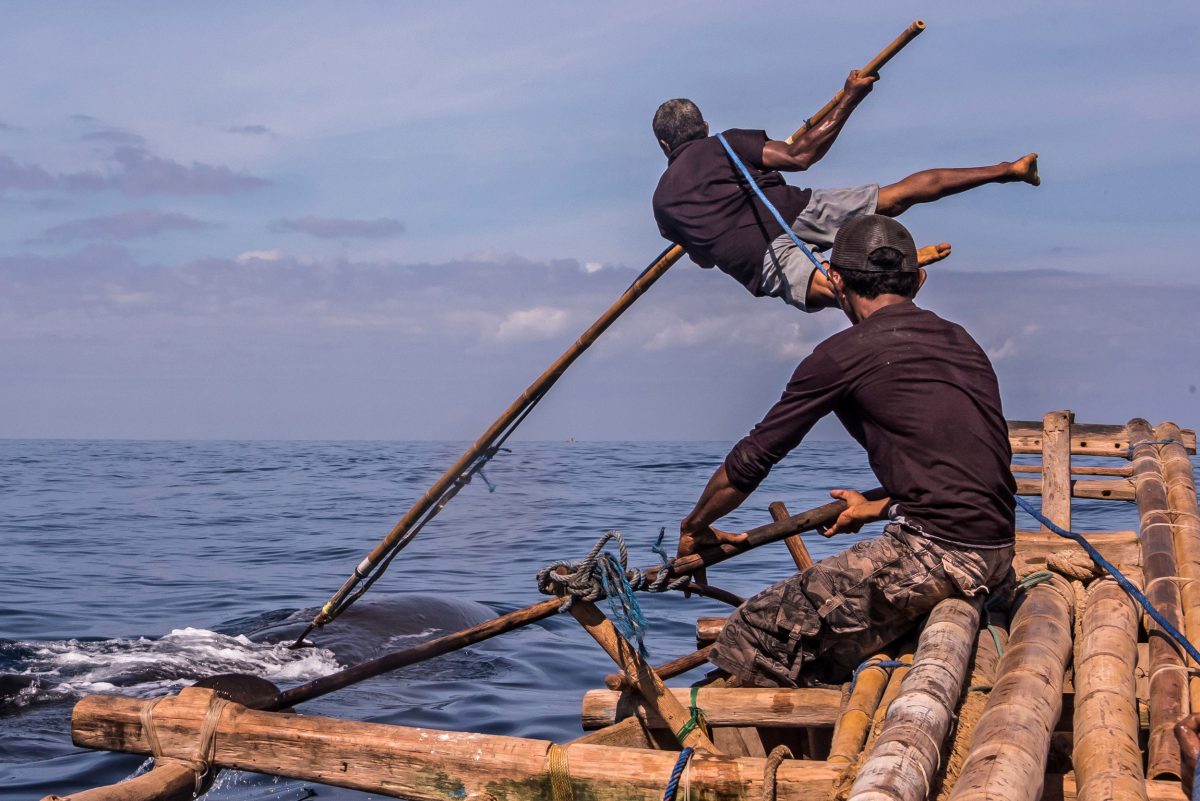 At just the right moment, the lama fa launches from the paledang to drive his harpoon into a sperm whale. A stabbed whale will thrash and try to swim or dive, dragging the boat with it, until it’s exhausted. It’s a highly dangerous endeavor for everyone involved—a paledang can easily capsize or be destroyed by a flailing whale. In this case, the wounded whale speared by Blikolulong escaped. 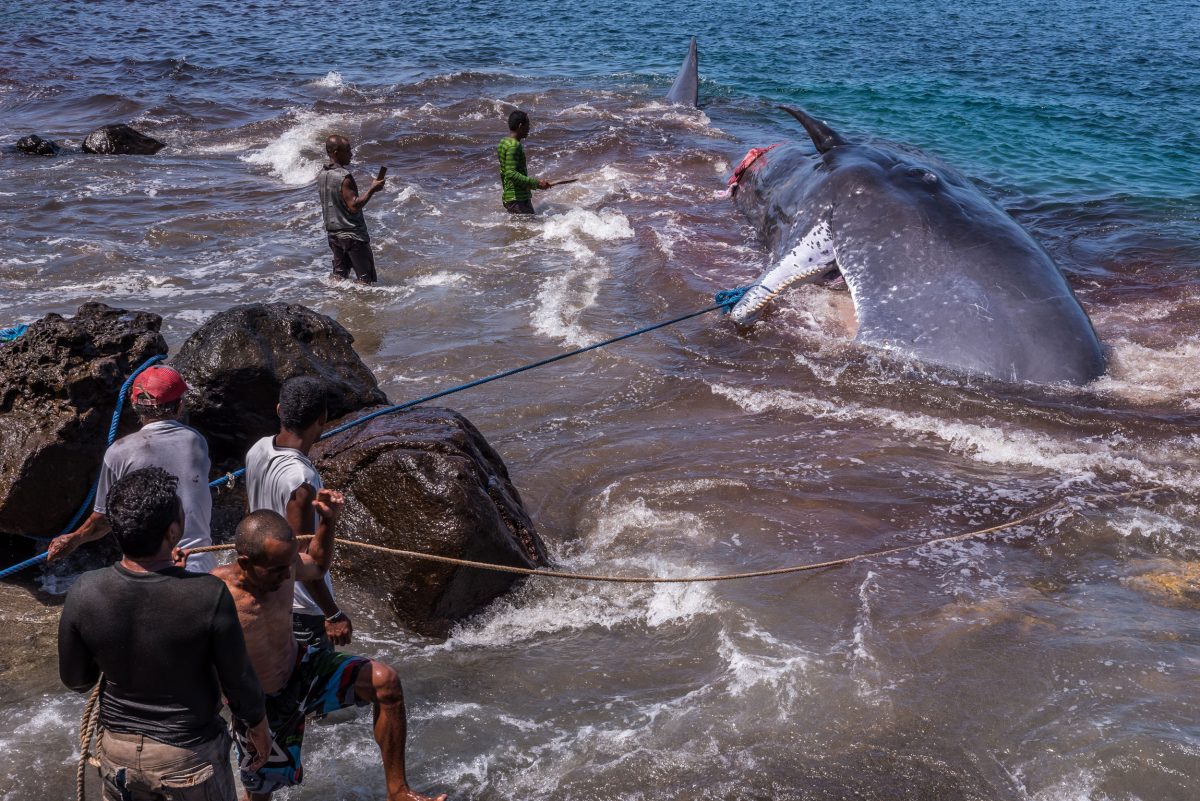 A week after Blikolulong’s whale got away, another crew found it floating dead at sea and towed it to shore. 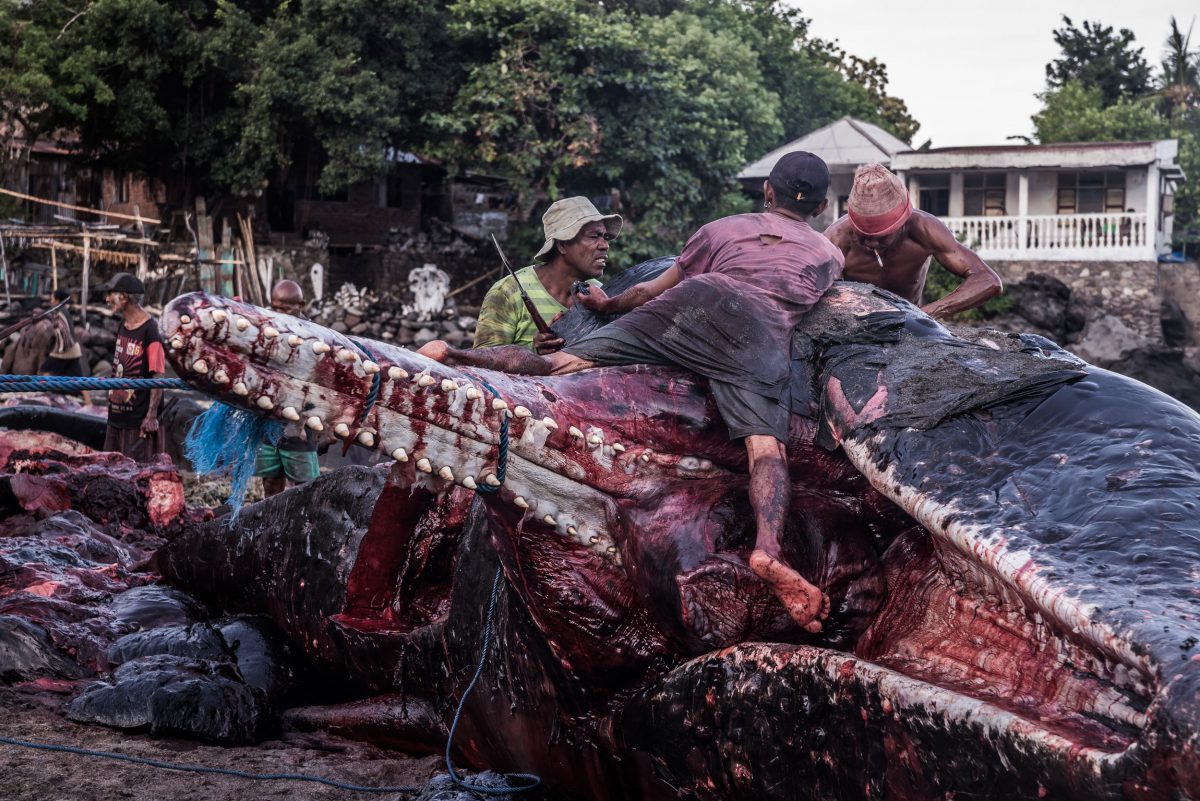 It takes almost two full days of work for the community to process the whale. The butchers carve away blubber and dissect the entire animal. Each part has its own benefit and purpose. Even the teeth, for example, are used for jewelry and talismans. 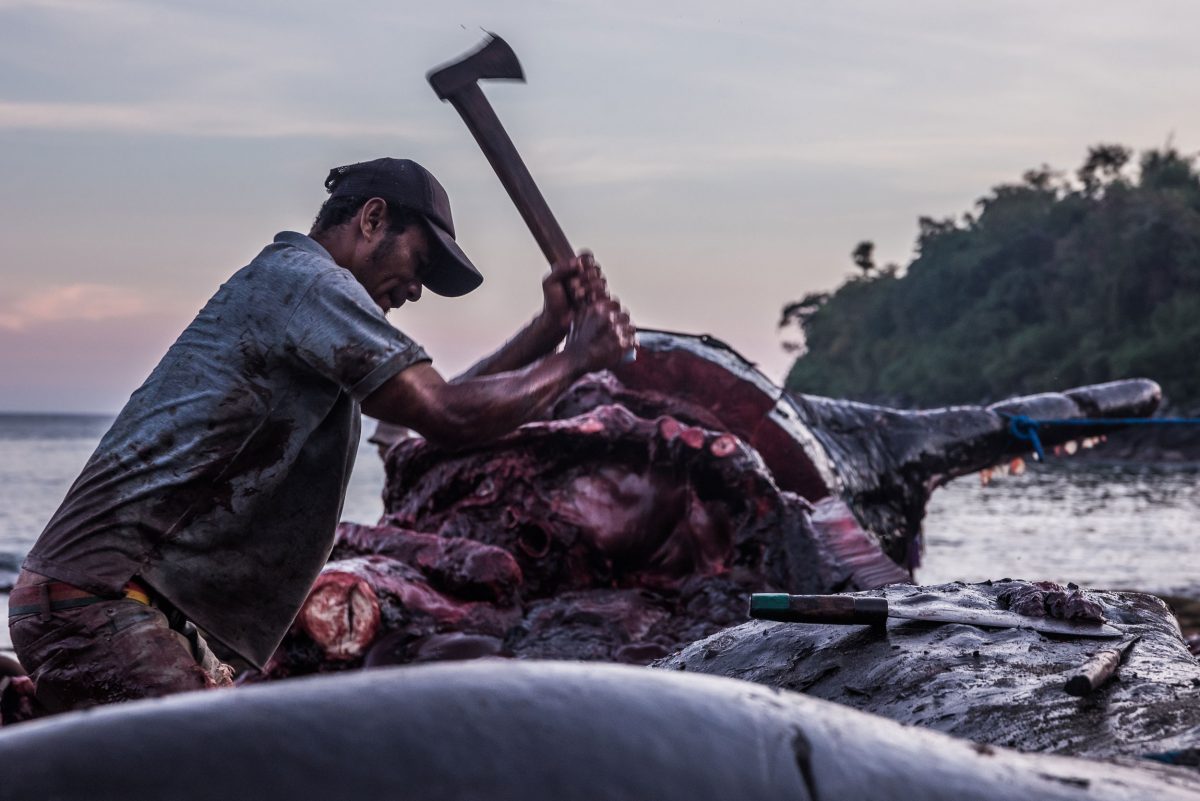 A worker labors over the sperm whale carcass at dusk. Villagers say a single whale is enough to feed the entire community for a month. The people of Lamalera raise some chickens and pigs for special occasions, but meat from the sea is their main source of protein. 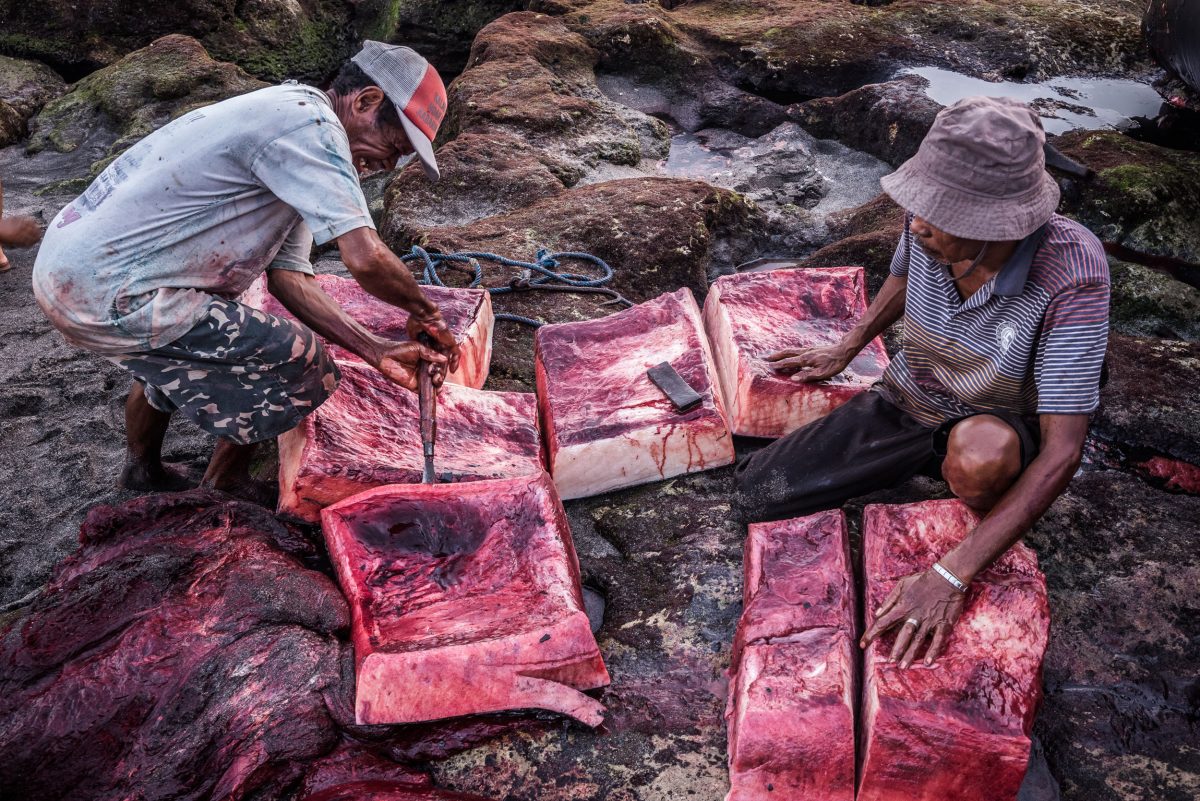 The decision of who gets what portion of meat is made by a paledang builder, who observes the butchering process and gives orders on how cuts should be made. The lama fa receives the biggest share, although he always gives it away to family; local belief stipulates that if he takes it for himself, his children will become stupid. 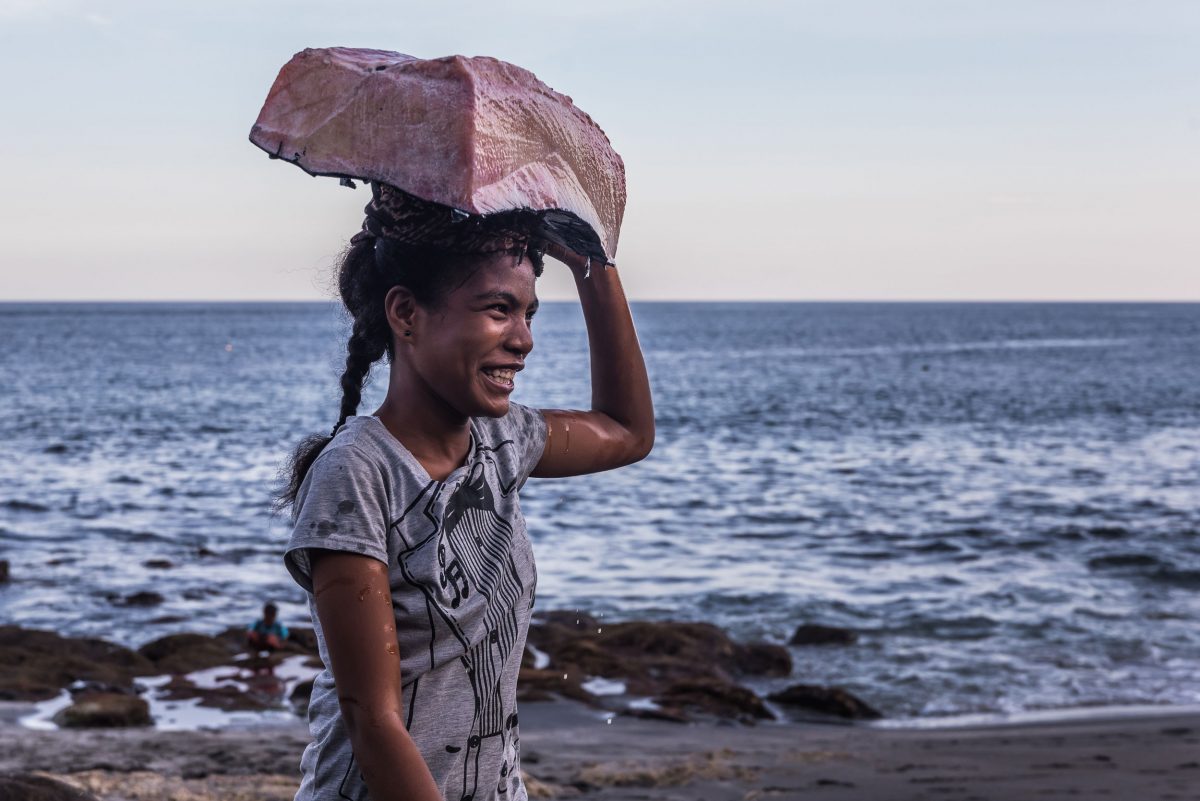 A young woman carries part of her family’s share of whale meat back to her home, where some of it will likely be fried fresh and the rest dried in the sun. The drying process can take more than a month. Although it’s an unwritten rule that villagers only exchange whale flesh for other foods, some will sell their share for cash so they can pay bills and resolve debts. 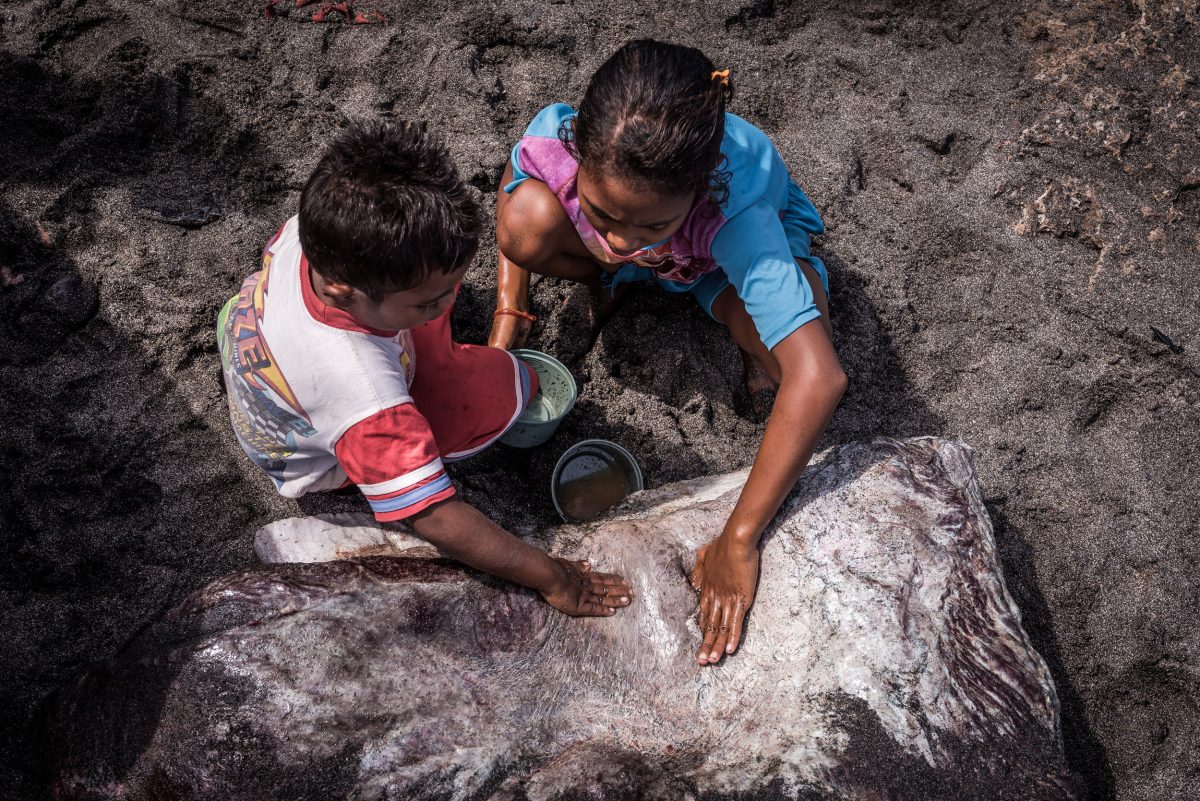 A whale’s blubber can yield many liters of oil for the community. The oil is used for cooking, as a nutritional supplement, and as a fire starter. Aside from collecting oil by pressing it out of the blubber, villagers also drain it from the whale’s head.