Historical pressings of seaweeds, such as this kelp, have proved to be a scientific boon for researchers. Photo courtesy of the Monterey Bay Aquarium

There are few things I enjoy more than turning a slimy piece of seaweed into a work of art. From scouring the tide pools for the perfect blades, to artfully arranging them on a piece of paper in my herbarium press, every step of the process is immensely satisfying.

Using the same technique that people use to press flowers, I can turn almost any algae into a natural work of art that can last for centuries. Although I press algae for artistic purposes, algae pressing has long been a scientific pursuit.

The practice emerged in 19th-century England as a way for scientists and natural history buffs to preserve and catalog the diverse array of seaweeds found along the country’s coasts.

Women were among the most avid algae pressers. Artfully preserving seaweeds was one of the few ways women could contribute to science in the 19th century. At the time, women were excluded from most scientific fields, with the exception of botany, which was considered a suitable hobby for them.

Thanks to the efforts of early algae pressers, many natural history museums contain vast collections of algal pressings that date back centuries. Scientists have long relied on these repositories to provide a glimpse of what algal species were present in the past.

In recent years, however, scientists have discovered several new ways of extracting data from century-old pressed algae—and they’re being used to solve a suite of marine mysteries, including the cause of Monterey Bay’s devastating sardine fishery crash.

These two examples of seaweed pressings were made decades ago. The red algae was collected in about 1929 near Friday Harbor, Washington. The kelp Macrocystis was collected near Pacific Grove, California, in 1892. Photos courtesy of the Monterey Bay Aquarium

In a new study published this past June, researchers from the Monterey Bay Aquarium examined a collection of dried, pressed seaweeds—dating back over 140 years—to learn what ocean conditions in the bay were like in the early 19th century.

Working with colleagues from Stanford University’s Hopkins Marine Station in California, and the University of Hawai‘i, aquarium researchers gathered pressings of seaweeds collected from Monterey Bay between 1878 and 2018 and performed a variety of chemical analyses on their tissues.

“We were working with old and beautiful specimens, so we tried to take the smallest samples possible,” says Emily Miller, the lead author of the study, who now works as a research technician at the Monterey Bay Aquarium Research Institute.

Despite the fact that some of the specimens were old and “a bit leathery,” Miller and her team were able to determine their amino acid and protein compositions, heavy metal concentrations, and stable isotope ratios.

The algae’s nitrogen stable isotopes were of particular interest to the researchers. Algae absorb nitrogen, phosphorus, and other nutrients from seawater like sponges. When nitrogen is abundant in their environment, it is reflected in the nitrogen content of their tissues.

The researchers analyzed the nitrogen stable isotopes from pressings of Gelidium, a type of red algae, and compared it to records dating back to 1946 of upwelling—an oceanic phenomenon in which wind moves warm surface water away from the coast, driving cold, nutrient-rich water up from the deep. 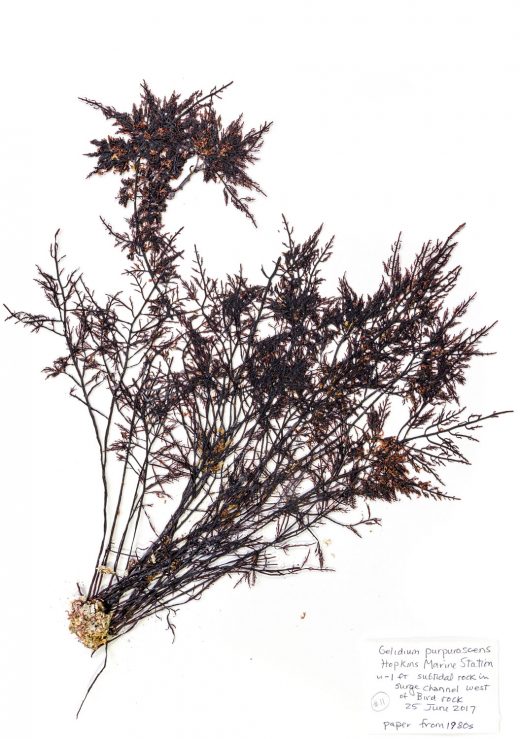 Techniques for preserving seaweed specimens by pressing them have changed little over the decades. This sample of Gelidium was collected in the 1980s. Photo courtesy of the Monterey Bay Aquarium

Knowing this, the researchers were able to use algal specimens to create a record of upwelling in Monterey Bay starting in 1878, extending the existing record back by nearly 70 years.

In doing so, the researchers uncovered new information about the sardine fishery collapse in the 1950s that devastated Monterey’s Cannery Row, whose once-thriving canneries and colorful people inspired John Steinbeck’s novels Cannery Row and Sweet Thursday.

The researchers found evidence that in the years leading up to the fishery’s collapse, upwelling in Monterey Bay was decreasing—likely due to climatic oscillations. This, combined with overfishing and other factors, they say, caused Monterey’s sardine stock to crash.

Understanding how changes in upwelling impacted fisheries of the past could improve the way fish stocks are managed today says Kyle Van Houtan, chief scientist at the Monterey Bay Aquarium and coauthor of the study. 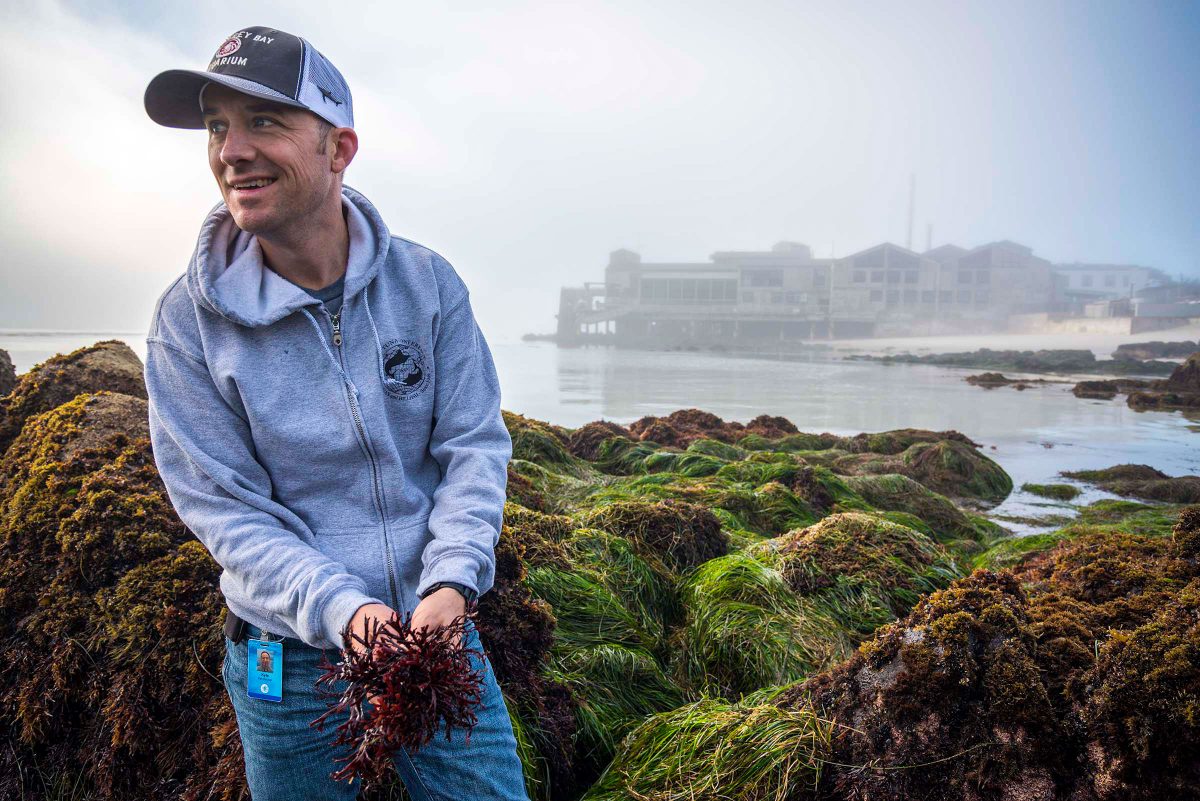 “Some species are like a thermometer and reflect what’s happening in the ocean in their populations. Other species are more resilient to environmental forces. The more we understand these relationships, the better we can forecast what the future might entail,” Van Houtan says.

The kind of data that will help us to better understand these relationships, Van Houtan says, is all around us—hiding in the tissues of algae, the feathers of birds, and the shells of sea turtles, just waiting for us to find it.

Scientists from Japan’s Hokkaido University, for example, recently determined the density of herring populations off the coast of Hokkaido during the late 19th century by examining the chemical composition of century-old algal herbaria.

Using newly developed methods of extracting data from algal pressings, such as isotope analysis and DNA sequencing, scientists have been able to measure the impacts of anthropogenic pollutants on coastal ecosystems, document changes in marine community structure, and create evolutionary trees for a wide variety of algal species.

“Old herbaria are more relevant now than ever,” says Suzanne Fredericq, a professor of biology at the University of Louisiana at Lafayette. “Old historical collections can tell us so much about the future,” Fredericq says.

Despite this, many algal herbarium collections are underused and underfunded. Maintaining such collections, Miller says, is vital to improving our understanding of the past, present, and future of our oceans. “There are so many other research questions that people could be using these collections to answer.”

If you want to help answer these questions, or are simply looking for a new creative outlet, Miller recommends taking up algae pressing.

“It’s really fun and easy to do,” Miller says. All you need to get started is some cardboard, a few sheets of herbarium paper, a stack of heavy books, and an open mind.