Sam Norton didn’t think too much about the first sea beans he foraged from the fragrant pluff mud just north of Charleston, South Carolina. In 2003, he was a curious kid attending marine science camp, and he relished crunching on the salty shoots as a summertime novelty. As he began a master’s program in environmental studies more than a decade later, Norton began to experiment with sea bean cultivation, hopeful he could one day sell the crop to local restaurants and markets.

Last November, Norton realized his vision when he delivered his first harvest of sea beans to local restaurants and produce distributors and opened up direct online sales. The beans, which Norton packages in 30-gram plastic containers, come from Heron Farms, his nontraditional agricultural venture located in one of Charleston’s industrial neighborhoods. Instead of growing the beans in the mud, Norton cultivates them inside a 90-square-meter room in a warehouse, in what might be the world’s first indoor saltwater farm.

It’s a test case for saltwater agriculture, which Norton believes has the power to make coastal ecosystems more resilient and productive in the face of climate change and rising sea levels.

Yet until recently, sea beans, which belong to the genus Salicornia and are also known as samphire, glasswort, pickleweed, and sea asparagus, had never figured prominently in Charleston’s storied culinary traditions. “Historians know almost nothing about the foodways of the native Cusabo tribes, who might have put the Salicornia to use in the Charleston area over the previous 1,000-plus years,” says Matt Lee, a journalist and cookbook author, who grew up in Charleston. “But in modern times, we definitely have not seen any citation in old cookbooks or oral histories—or anything—that would indicate awareness or use of Salicornia.” 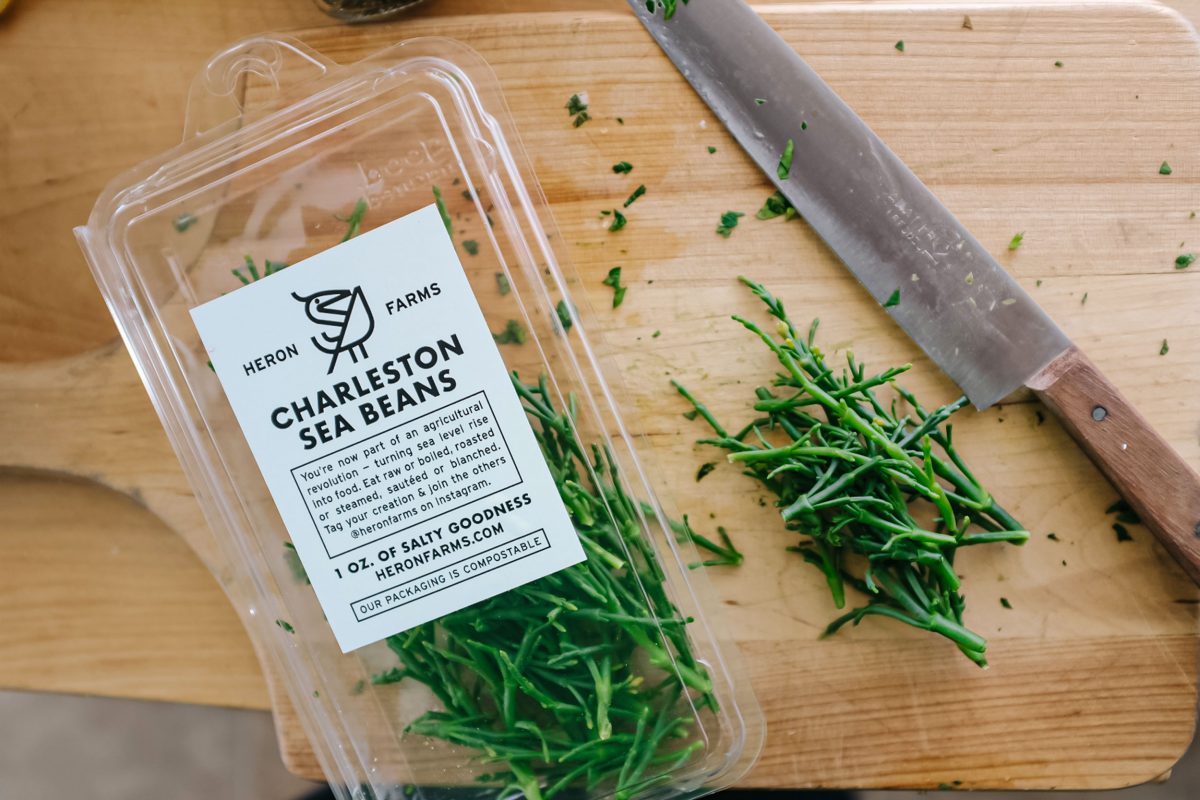 Charleston, South Carolina, where Heron Farms is located, is expected to see a meter rise in sea levels over the next 50 years. Because sea beans grow in salty conditions, Heron Farms markets them as a food that can endure coastal inundation. Photo courtesy of Heron Farms

That’s not the case in other parts of the world. In Turkey, cooks blanch Salicornia and splash it with olive oil and garlic. Koreans dry and grind the plant and blend it with sea salt. Italians tuck the shoots into bowls of pasta; the French do the same when making omelets and terrines. Across cultures, it’s tossed into salads and preserved as a pickle. In modern global cuisine, it’s used as a garnish to infuse dishes with a pop of texture and a taste of the sea.

“When I taste that sea bean, I taste Charleston water. It’s the perfect amount of salinity,” says James London, the chef-owner of Chubby Fish, a seafood restaurant in downtown Charleston. “I got one of Sam’s first batches, and it was breathtaking.”

Now that there’s a local source of premium Salicornia europaea, the plump and tender sea bean that Norton grows in place of the native and tough S. virginica, more of Charleston’s high-end restaurants are adding the ingredient to their menus. Local brewers have also begun fermenting the plant to create Gose-style beers and kombucha.

Heron Farms works much like a standard hydroponic operation, in which plants are grown in nutrient-rich water rather than soil. But sea beans are a type of halophyte, a salt-loving terrestrial plant that can’t grow in pure fresh water. So, every week, a local fishing crew brings in at least 380 liters of salt water from off Charleston’s coast. Though Norton dilutes that seawater from 35 parts per thousand of salt to just five or 10 parts per thousand, it still puts an extra burden on the equipment, which degrades faster in corrosive salt water. 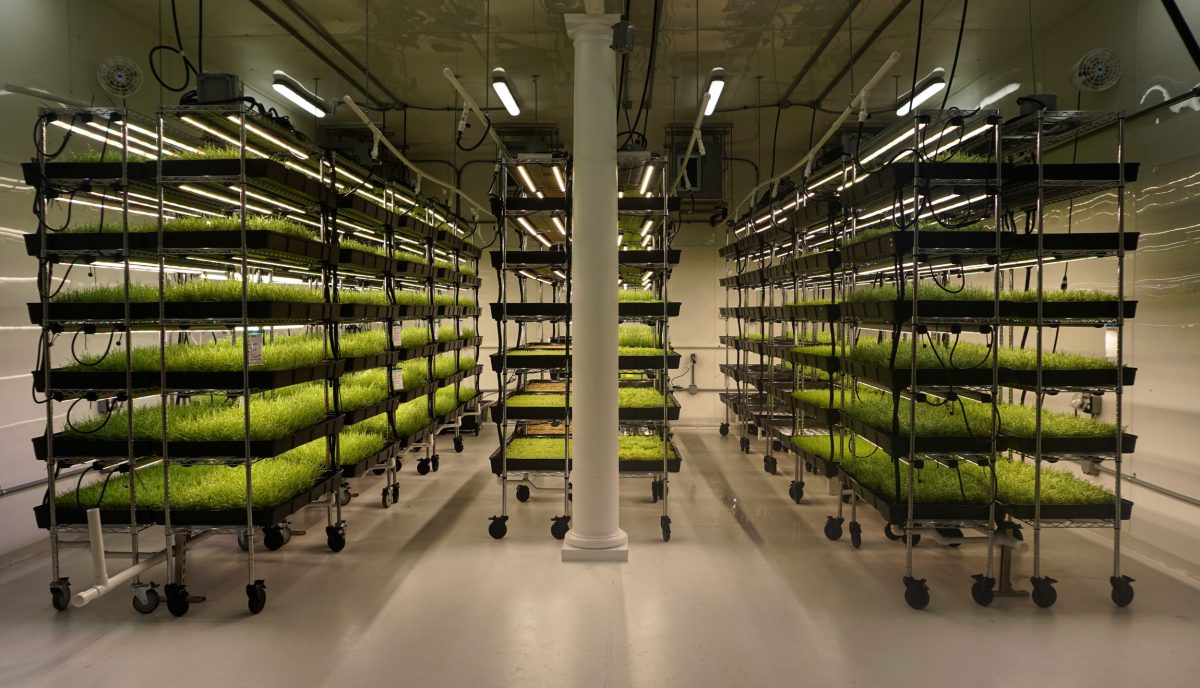 Heron Farms grows sea beans in a Charleston warehouse under LED lights, using salt water hauled in from off the coast. Photo courtesy of Heron Farms

Indoor farming makes it possible for Norton to produce a year-round crop. In the wild, sea beans flourish from spring to midsummer before turning bitter and tough. But without the sun for photosynthesis, Heron Farms must rely on energy intensive light bulbs. “We will emit more carbon dioxide than the plants soak up,” says Norton. Heron Farms is currently running at half capacity, and Norton calculates that for every kilogram of sea beans, the farm emits 12.5 kilograms of carbon dioxide. “Indoor agriculture is a good bridge to feed some of us now, but it’s not where we should be headed.”

Norton has seen firsthand the long-term effects of unchecked energy use and the resulting climate change. He grew up on Isle of Palms, one of Charleston’s barrier islands, and the walls of his childhood bedroom still bear the one-meter flood mark of Hurricane Hugo, a devastating 1989 storm that produced the highest recorded tidal event along the US East Coast. While attending college in the city, his classes would occasionally get canceled for flood days. “In extreme cases, I would get into a kayak and paddle down roads,” he recalls.

As Charleston faced increased flooding, especially in the last five years, Norton had a series of revelations. “I was taking a geology class and learning that the outcomes of sea level rise in Charleston are really one-sided. Most of the lowest lying areas have rent-protected housing, where the marsh seemed to be coming back,” says Norton. There, he noticed sea oxeye daisy, another halophyte, growing around housing projects. “It’s a beautiful daisy, but it’s also a sign that the street you’re walking down has tidal inundation.” 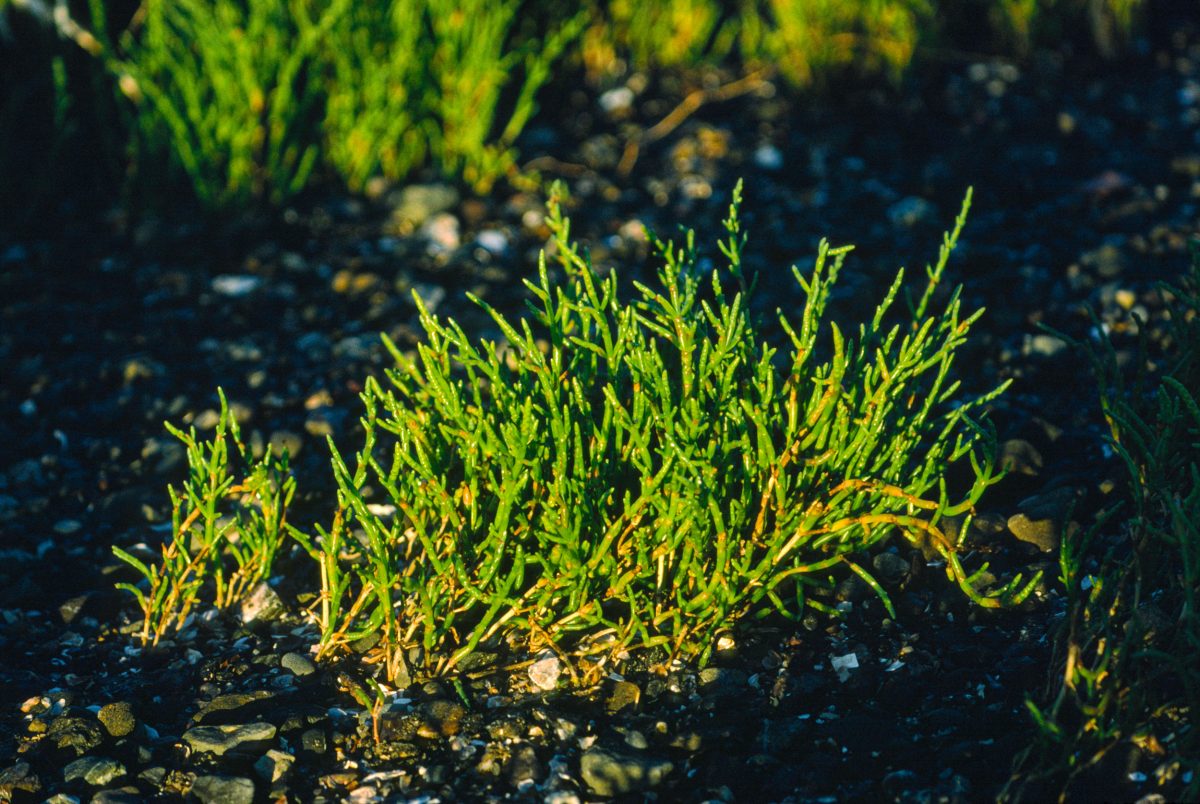 As Norton observed, much of Charleston’s affordable housing was built in flood-prone areas, and residents have long complained about interrupted public transportation, inundated homes, and costly repairs. A recent study from Climate Central reveals that Charleston’s affordable housing stock is among the most vulnerable to flooding in the country. By 2050, the number of at-risk units is expected to increase fivefold.

Charleston has a flooding problem, and “we built ourselves into it,” says Jared Bramblett, a hydraulics engineer who specializes in flood mitigation and resilient infrastructure. Over the centuries, developers filled in tidal creeks and marshes to make way for homes and businesses. Now, there’s nowhere for water to go—except into the streets and built environment.

In the past two decades, the number of tidal flooding events in Charleston has risen 202 percent, and city planners are bracing for up to a meter rise in sea levels over the next 50 years, according to Bramblett, who also photographs Charleston’s high-water events.

With Heron Farms, Norton set out to create a business that could thrive in Charleston’s flooded normal by taking advantage of the region’s brackish water to grow food. That’s why Norton is focusing on halophytes, which suck up and remove salt from the soil, allowing less salt-tolerant plants to grow. He’s also begun branching out into habitat restoration. So far Heron Farms has seeded over a quarter hectare of land with a native species, S. bigelovii, and Norton plans to expand the effort. 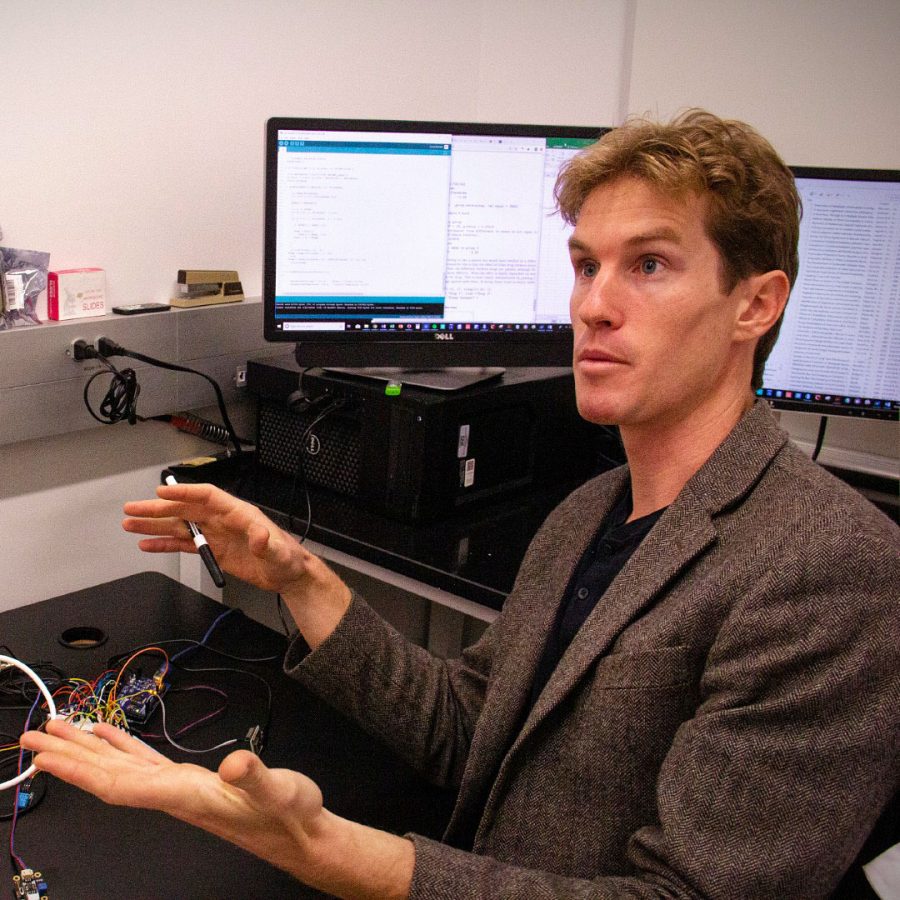 Sam Norton, the founder of Heron Farms, began tinkering with the idea of saltwater agriculture as a graduate student in Charleston, South Carolina. Photo courtesy of Heron Farms

Farther afield from Charleston, Norton is collaborating on coastal restoration projects in Bangladesh, where rice paddies have been inundated with rising seawater. He and Yanik Nyberg, a halophyte entrepreneur and the owner of Scotland-based Seawater Solutions, have sown four pilot farms with salt-loving plants, including sea beans, which, by removing excess salt from the soil, will support a more robust rice harvest. The sea bean crop, marketed and sold in Asia, will also supplement farmer incomes.

Norton has recently turned to cordgrass, another halophyte, to develop a biodegradable fishing bobber. Other companies are innovating with halophytes to develop textiles, to treat effluent from fish farms, and to supply a source for jet fuel and vegan omega-3 fatty acids. Meanwhile, scientists are trying to unlock the plants’ genetics to develop new salt-tolerant crops. “We’re developing so many products—from food, cosmetics, and biofuel to sustainable aquaculture feed and carbon credits,” says Nyberg.

At least for the moment, though, Norton’s attention is pinned to Heron Farms and its 30-gram packets of sea beans—the edible proof of concept for his larger vision of saltwater agriculture.