Over the weekend, pounding rain on the east coast of the United States, amplified by Hurricane Joaquin, killed at least seven people and caused intense flooding in parts of South Carolina. Joaquin has since curled off to die in the North Atlantic, but until the rain fully stops and the water recedes, flooding will pose a lingering threat. So, to the residents of the affected region: until the coast is clear, please, please, please stay out of the floodwater.

Though they often lack the shock and awe of tornadoes and wildfires, floods are among the deadliest of nature’s catastrophes. Last year, 3,200 people died from flooding worldwide, accounting for 42 percent of natural disaster deaths—far more than storms, landslides, or extreme heat or cold. In June 2014, a flood in China killed at least 14 people and negatively affected five million, making it the second-most severe disaster of the year.

And yet, many people underestimate the deadly power of floods, a misunderstanding that carries a very real cost. As a new synthesis report shows, a surprisingly large number of flood-related deaths are caused by people purposely going into the water.

“People don’t understand that rushing water is very dangerous,” says natural hazard psychologist Julia Becker, who led the recent review. “They might know floods are kind of risky, but they don’t understand what the real consequences are.”

The statistics compiled by Becker and her colleagues paint a shocking picture of some people’s disregard of the risks. In Australia, for instance, nearly 25 percent of people killed by floods were in the water to play, swim, take a boat ride, or settle a bet. In Europe and the United States, people who decided to go boating in floodwater—for fun, not survival—account for nearly four percent of flood deaths. Almost half of injuries and close calls in flash floods are caused by carousing in the water.

News reports showing children swimming in an overflowing street or surfers taking on rough surf can make floods appear harmless and fun, Becker says. Add in a goading friend or an opportunity for YouTube fame, and it’s easy to see why some people decide to brave the waters.

But it’s not just adventure that draws people into the floodwater. Nine percent of flood deaths in the United States, and a quarter of Australian flood deaths, result from people trying to cross through the water to reach a destination, such as a child’s school or a workplace. In South Carolina this past week, more than 100 people had to be saved after they tried to cross roads flooded by Hurricane Joaquin.

Driving poses a particular peril. Cars can provide an illusion of safety, but rushing water can hide a washed-away road or bridge. “It might be just a harmless-looking pool of water,” Becker says, “but there might be other dangers.” 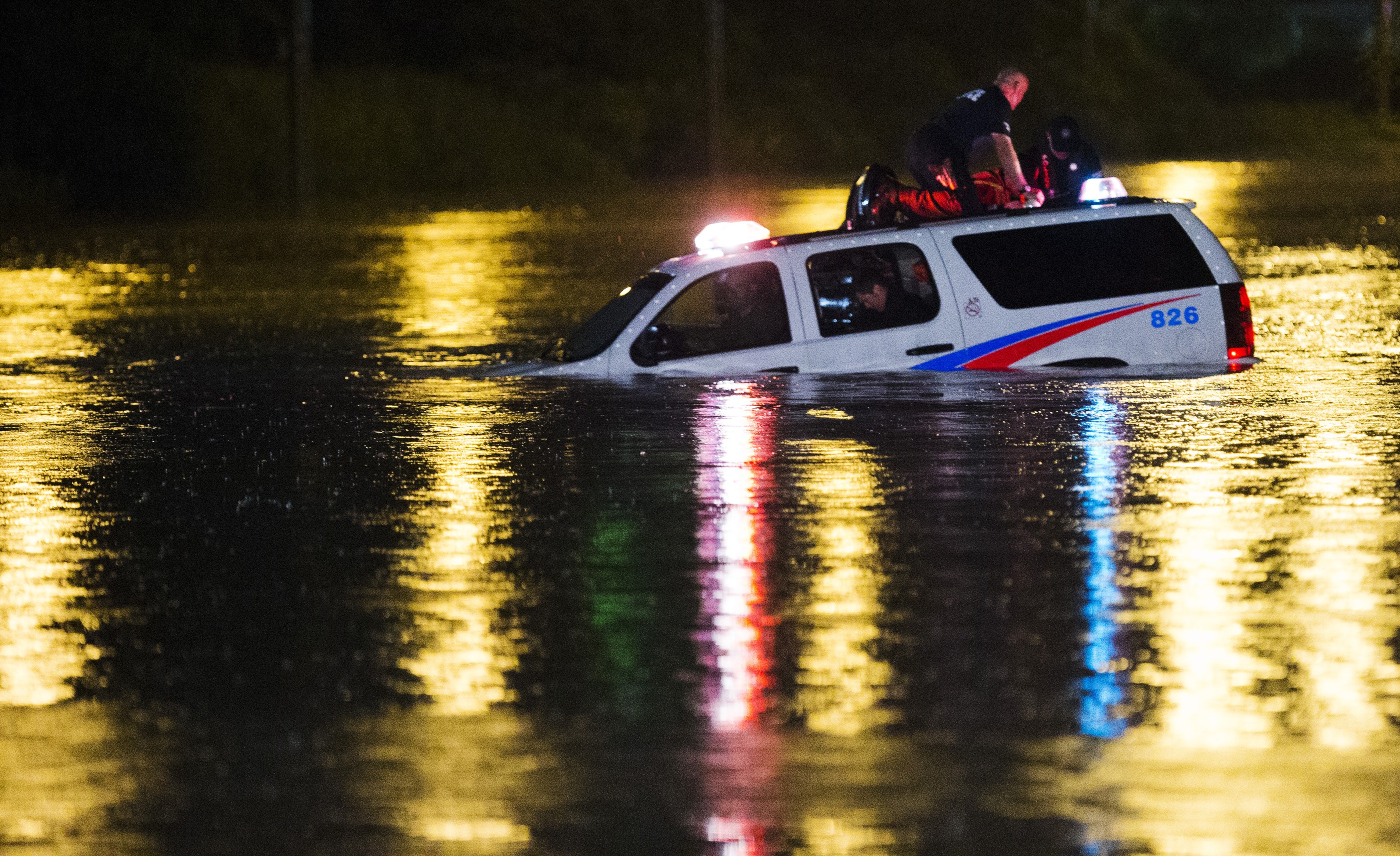 Trapped by flash flooding during a heavy rainstorm, these police officers in Toronto, Canada perch atop their vehicle. Photo by Mark Blinch/Reuters/Corbis

Yet when people take their chances in the water, it puts others at risk. Rescue workers account for just over one percent of flood deaths in the United States and Europe, and more than six percent in Australia, says the study.

Most of the available research Becker found focused on Australia, the United States, and Europe. But flooding is a big problem elsewhere, too: in the past 10 years, floods have killed 44,000 people in Asia and 7,300 people in Africa, according to Red Cross data.

Though anyone can fall victim, men are far more likely than women to die in a flood. In Australia, men account for 71 percent of flood-related deaths. Globally, men die from floods twice as often as women, according to the World Health Organization. Young men in particular are at risk, Becker’s study found, due to both their higher representation in fire and police departments and their propensity for daredevil behavior.

Education about the fatal possibilities of floods can help, says Becker, but humans, by nature, can be stubborn.

“People are really complex,” Becker says. “There isn’t a secret message you can give to people that will make everybody do the right thing.”

This story’s subtitle was updated for accuracy.