A 2015 dam collapse in Mariana, Brazil, caused widespread contamination of downstream waterways, including the Doce River and the South Atlantic in the Abrolhos Marine National Park. Photo by Gabriela Bilo/Estadao Conteudo/AP Images

The collapse of the Fundão waste dam in Mariana, Brazil, used to store the byproducts of mining activities, sent 32.6 million cubic meters of tailings—a toxic slurry of mud, iron oxides, manganese, and silica—spilling into the Doce River. The unprecedented disaster, which took place in November 2015, caused 19 deaths and destroyed two rural districts. Seventeen days later, the toxic tide arrived at the sea, more than 600 kilometers away.

The damage to the rivers in the Doce basin was devastating, and, more than three years on, fishing is still forbidden at several locations because of high concentrations of heavy metals in the water. But unlike in rivers, the effects the tailings had on marine life in the South Atlantic have remained largely unknown.

Now, a new study led by Heitor Evangelista, a geoscientist at Rio de Janeiro State University, shows that the worst-case scenario became reality. The collapse of the Fundão waste dam, a facility operated by Samarco—a joint venture of Vale and BHP—contaminated the coral reefs in the Abrolhos Marine National Park, a 914-square-kilometer nature reserve in northeast Brazil. The toxic slurry caused the contamination of coral exoskeletons by heavy metals—substances that can have serious health effects on many organisms.

“It’s the coral reef complex with the biggest biodiversity in the South Atlantic; [it’s] an industrial plant of calcium carbonate that keeps the biogeochemical balance in the ocean,” says Rodrigo Leão de Moura, a biologist at the Federal University of Rio de Janeiro who was not involved in the study. Moura is also one of the coordinators of Rede Abrolhos, an academic consortium of scientists who work at the national park.

The Abrolhos marine park, Moura says, is “the main region of reproduction for humpback whales, and a waypoint for sea turtles and migratory birds.” 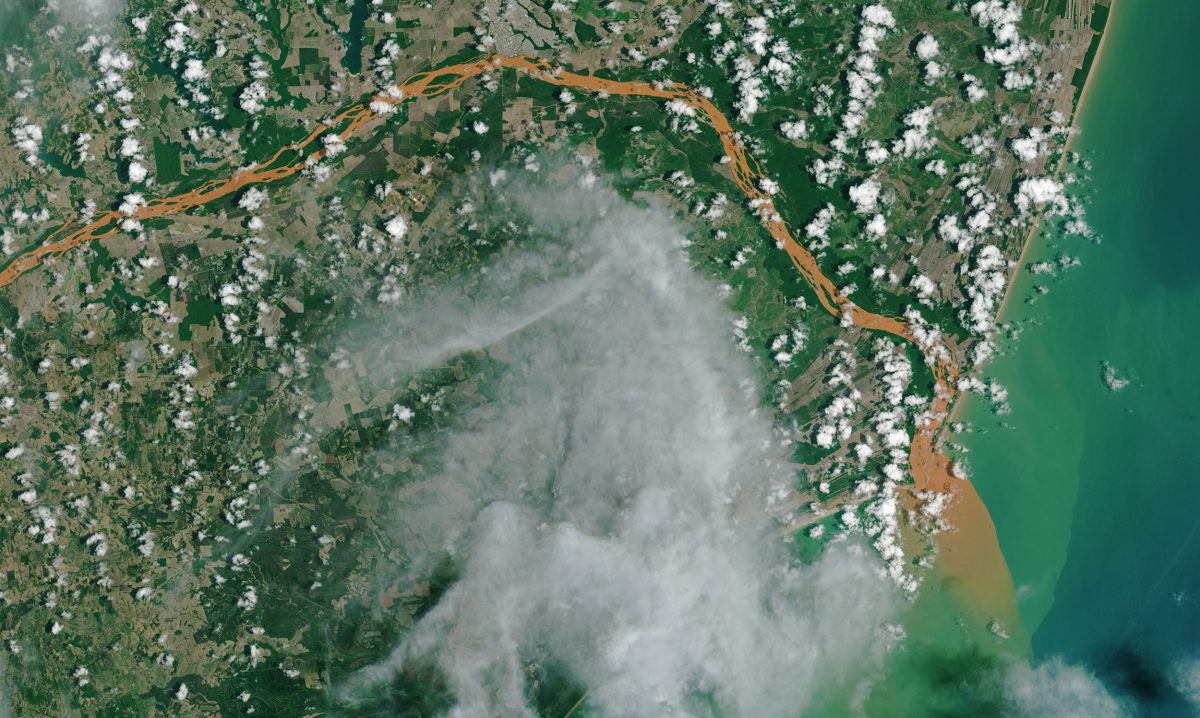 Initial estimates suggested the toxic mine tailings wouldn’t make it far from the river’s mouth. But new research suggests that not only did the mud spread much farther than expected, the contaminants borne by the plume traveled even farther than the visible plume. Photo by NASA Earth Observatory/Joshua Stevens, using Landsat data from the US Geological Survey

In January of this year, another tailings dam collapsed in Brazil—a Vale-operated structure that sat roughly 350 kilometers inland near Brumadinho. About 13 million cubic meters of toxic mud were spilled, killing 186 people, with 122 still missing. Since then, that mud has traveled more than 300 kilometers along what would be a roughly 2,000-kilometer riverine path to the ocean. According to the environmental foundation SOS Mata Atlântica, the Paraopeba River is currently unsuitable for aquatic life. It’s unknown if the mud will make it out to sea.

Moura is cautious about drawing too many comparisons between the Brumadinho disaster and the dam collapse in Mariana. “The causes of the disasters were the same. Both of them were upstream tailings dams. Both of them were operated by the same company. But the situations are different: the amount of tailings in Brumadinho is much smaller and the river basins are completely different,” Moura says.

While the tailings from the Brumadinho dam haven’t yet reached the ocean, in 2015, the toxic tide from the Mariana dam made it past the mouth of the Doce River and out to sea.

Once it hit the South Atlantic, the mud rapidly propagated over 30 kilometers into the sea—quickly surpassing estimates that it wouldn’t make it more than 10. Initial toxicity surveys showed plankton, crustaceans, and fish contaminated by lead, arsenic, copper, and cadmium.

But Evangelista wanted to irrefutably confirm that the metal contaminating the Abrolhos marine life had indeed come from the dam collapse. Evangelista and his team started studying the exoskeletons of two species of stony corals, comparing the concentrations of metals in skeletal material built before and after the 2015 spill.

Evangelista says it took him a year to complete the study, as the research was funded entirely by his university. Had he received support from Samarco or the government, he says, he would have concluded it within two months.

The analysis revealed a significant increase in the levels of zinc and copper in the coral. “It happened shortly after the [mining] residues arrived to Abrolhos,” Evangelista says.

The study also showed that one of the coral species studied suffered a reduction in its growth and an increase in the rate of degradation caused by organisms such as mollusks and sponges. “This might be a signal of long-term effects on the life of these organisms,” Evangelista says.

According to Moura, Evangelista’s study also offers incontrovertible evidence that, in the marine environment, the dissolved substances borne by a plume of mud have a greater reach than the plume itself. “We don’t know much about the dispersion of these materials in the seawater, but now it’s unquestionable that they contaminated Abrolhos,” he says.

Although the pollution was not lethal for the corals, Moura says the results suggest that Samarco should be responsible for continuous monitoring in the region.

Evangelista sent his report to the Chico Mendes Institute for Biodiversity Conservation, the government agency that administers the Abrolhos park. Fernando Repinaldo Filho, unity manager of the park, says the report is currently being analyzed by the agency and may lead to an official request to the company for compensation of damages or other legal procedures. “It’s a problem of great magnitude. The park neighbors two other preserves, and these materials are certainly there, too.”