Small brown-speckled seabirds, marbled murrelets have the unusual habit of nesting in the tops of old-growth trees. Photo by Brett Lovelace/Oregon State University

In the upper forest canopy of the Oregon Coast Range, cradled in the crook of a branch, a single egg balances on a lush carpet of moss. Unlike most seabirds, which nest near the ocean in burrows or on cliffs, the marbled murrelets that made this egg predominately nest in the upper branches of old-growth trees. Found along North America’s west coast, often dozens of kilometers inland, marbled murrelets’ nesting habitat is imperiled by commercial timber harvesters, who covet the valuable trees in these highly productive coastal rainforests.

Now, scientists from Oregon State University (OSU) are experimenting with a technique that could revolutionize the conservation of this threatened seabird, which continues to struggle despite increased protections in the United States and Canada.

In recent experiments, the team, led by OSU biologist Jonathon Valente, showed that a marbled murrelet’s choice of where to nest is strongly influenced by hearing the calls of other murrelets in the area. The authors suggest this could be leveraged to attract marbled murrelets away from stretches of threatened forest into currently unoccupied stands that offer prime breeding habitat. Their research shows that the simple act of playing marbled murrelet calls through a speaker is enough to spur the birds to relocate.

“We’re constantly finding ourselves surprised at just how important social attraction is to breeding habitat selection by birds,” says Valente.

The use of artificial calls to manipulate bird behavior is not new. Stephen Kress pioneered the technique in the early 1970s to entice Atlantic puffins and terns back to a treeless island in Maine, aptly named Egg Rock. Kress, the founder of the Seabird Restoration Program at the National Audubon Society, used recordings of puffin and tern calls, wooden decoy birds, and mirrors to give the impression of a thriving seabird colony, attracting actual puffins and terns to begin nesting on the island—which they’ve been doing ever since. The success of this project set the stage for seabird restoration work worldwide. To date, more than 60 seabird species have been lured to viable breeding grounds using the principles of social attraction.

Keen to test whether marbled murrelets would respond as readily to social attraction as other seabirds, the OSU team surveyed the Oregon Coast Range, where commercial timber harvesting has reduced old-growth stands to a mere five percent of historical levels. Targeting mature forest sites that were unoccupied by marbled murrelets and not slated for logging, the researchers set up bespoke recording and playback devices at 14 locations to broadcast marbled murrelet calls throughout the 2016 breeding season. The broadcasts were local recordings of vocalizations made by prospecting and breeding murrelets flying over and circling the forest. 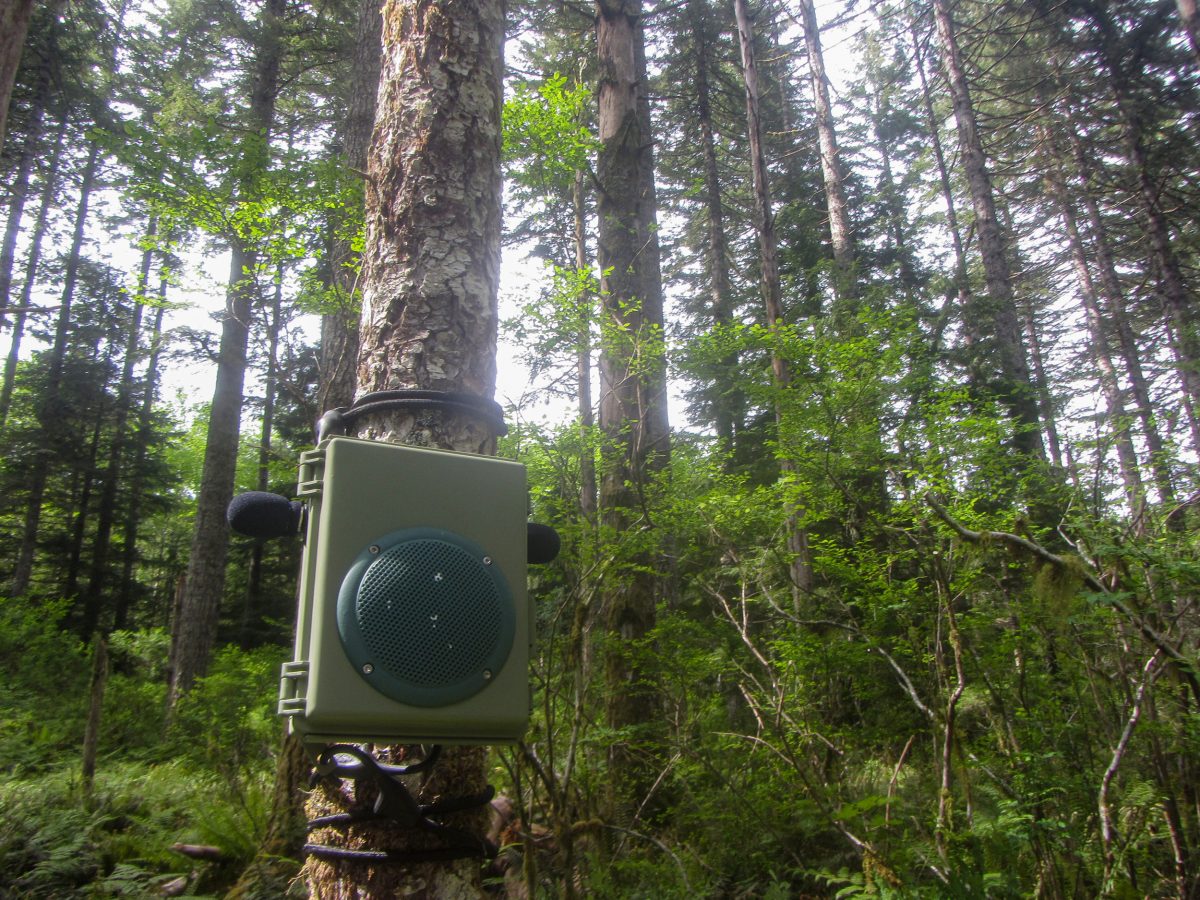 By playing recordings of marbled murrelets’ calls, researchers found that they could entice the birds to new nesting habitat. Photo by Stephen Rossiter

The following year, they returned to the broadcast sites and a set of control sites where they hadn’t broadcast any artificial calls to check for signs of nesting murrelets. Since murrelet nests are hidden within branches high above the ground, the researchers used signs, such as birds flying beneath the tree canopy or circling above trees, as indicators of nesting. They found that marbled murrelet nesting activity was roughly four times higher in broadcast sites.

OSU wildlife biologist Kim Nelson, who worked on the new research and has been studying marbled murrelets since the 1980s, says she’s often watched the birds circle the forest canopy while calling during the breeding season. “Despite their solitary nesting habits, marbled murrelets are still a sociable bird,” she says. The cries of other murrelets alert birds to the best nesting habitats, she says; crucially, this means that these habitats are likely to remain occupied. “They’ll return year after year to the same stand to nest as long as there are no changes.”

But in other places, she adds, there is suitable habitat but few birds. “It would be great to use the playback to draw birds back to those stands,” she says. However, she cautions that any playback projects must be carefully planned and monitored to ensure the birds are not lured to nest in unsuitable areas.

Another use for this technique could be safeguarding animals from natural disasters. “If you’ve got a species that is limited to a small area, there might be some advantages to helping expand them to new locations so that one hurricane doesn’t just wipe out an entire population,” says Valente.

And marbled murrelets are no strangers to disaster. According to Josh Adams, a wildlife biologist with the US Geological Survey who was not involved in the research, the August 2020 Lightning Complex fires that tore through old-growth forests in California’s Santa Cruz and San Mateo counties burned up 25 percent of known marbled murrelet habitat in the state.

Despite the habitat destruction in California, Adams says the time is not right to manage the murrelet population through social attraction projects. “The vocalization study was very interesting, and that technique has been used to kick-start [seabird] breeding in other areas where habitats have been protected or predators have been removed or managed,” he says. “But there’s more work to be done before it is implemented as a management tool.

“Rather than trying to relocate a species as a stopgap measure, it might be better to work toward preserving what’s left of their habitat,” he says.

But with marbled murrelets’ dual reliance on the ocean and old-growth forests, their prospects for the future are unclear. Logging and catastrophic wildfires have decimated coastal forests, and marine heatwaves have depleted their food supply.

Adams is eager to find out how the murrelets returning to breed in California’s scorched forests will react. He is certain the birds will return to their previous nesting sites with the intention of breeding, but whether they will find alternative sites, or wind up refraining from breeding and return to sea, remains to be seen.

“Seabirds are creatures of habit,” he says, “and they’ll go up to those areas where the skeletons of those trees remain, and they’ll do what they do inland: they will call and vocalize … then they’ll go back out to sea; I think we will see a lot of murrelets out on the water this year.”