A fishing boat leaves from Eyemouth, Scotland, on October 31, 2002. Photo by Colin McPherson/Corbis

At the turn of the millennium, the European Union’s fisheries management division faced a hard truth: its attempts to revitalize the North Sea’s depleted fish stocks were at best ineffective, and at worst, causing additional pressure on the ecosystem. This news, combined with findings that cod populations were at a high risk of collapse, forced a reevaluation of fisheries policies.

Over the past decade, new policies, including an aggressive reduction of the North Sea fishing fleet and efforts to limit bottom trawling, have started to pay off. Now, North Sea fisheries are finally back on track toward sustainability.

The recovery of North Sea fish stocks is a rare good news story for the world’s fisheries, and one whose hard-learned lessons could, theoretically, be implemented elsewhere.

As new research shows, the size of fish in the North Sea directly relates to the level of bottom trawling activity. Marine biologist Georg Engelhard and colleagues studied how the “large fish indicator” (LFI) changed in the North Sea from 1983 to 1999, and from 2000 to 2012. The LFI loosely estimates the health of the marine ecosystem by calculating the ratio of large fish (those longer than 40 centimeters) to small fish (less than 40 centimeters).

“Large fish are important for a number of reasons. They’re charismatic, they have cultural value attached to them, people are more interested in large fish in general, they’re important top predators so they’re key in the ecosystem,” Engelhard says. But when fish start getting hauled in, “large fish are usually the first ones to go.” 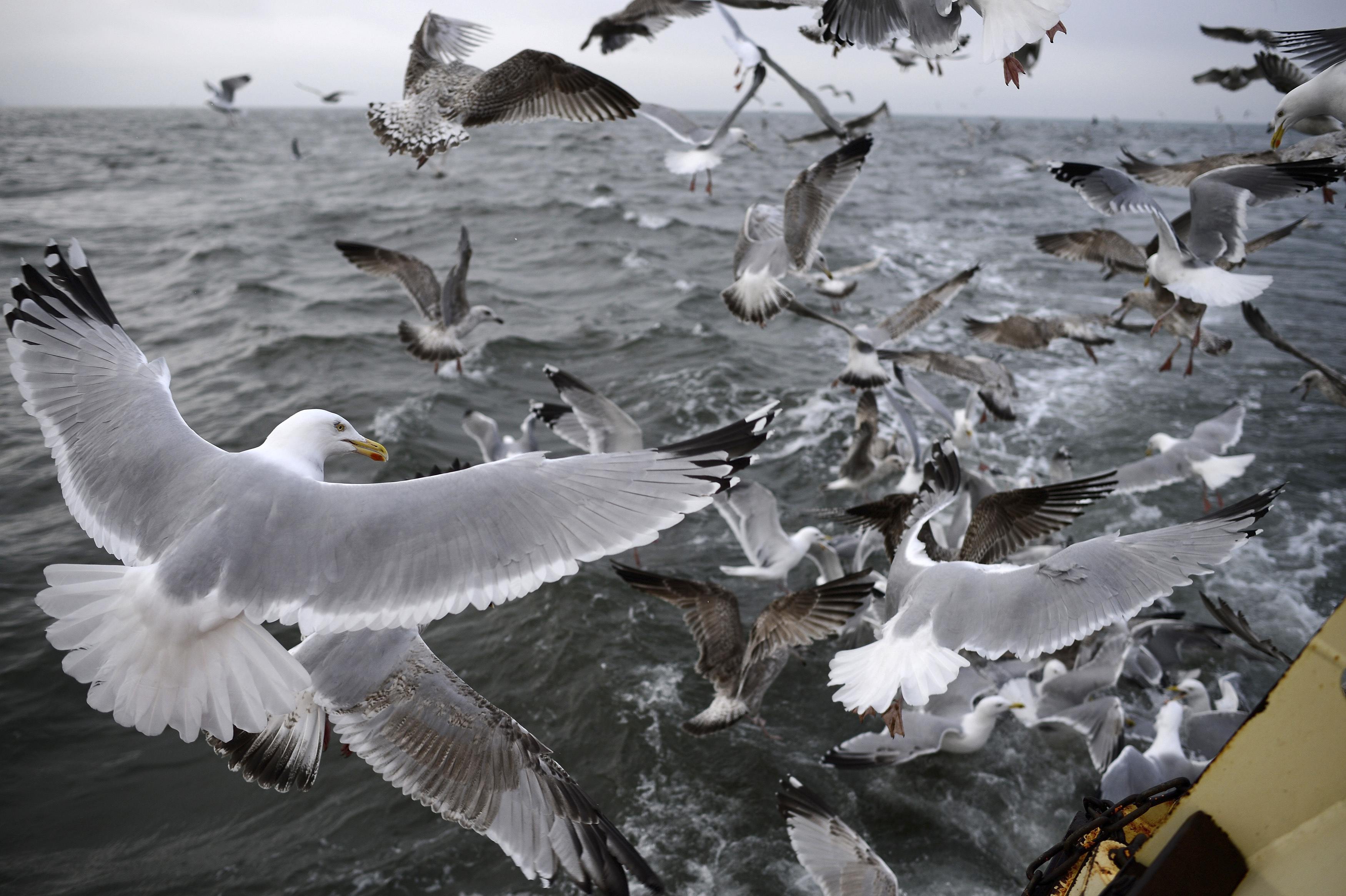 Seagulls hunt for fish off the side of the fishing boat Whitby Rose in the North Sea. Photo by Dylan Martinez/Reuters/Corbis

The team compared the LFI measurements against the level of trawl fishing activity. They found that areas of the North Sea where otter trawling (a type of bottom-fishing) was most intensive in the 1990s also saw the greatest reductions in LFI from 1983 to 1999. Not surprisingly, the regions that saw the biggest increases in LFI coincided with the biggest drops in otter trawling—a change that was likely spurred on by the EU incentivizing fishers to scrap their fishing licenses. Much of this reduction was in the western North Sea, near Scotland and England.

North Sea stocks as a whole have yet to hit a target LFI of 30 large fish per 100, a benchmark the EU established as an indicator of “good environmental status.” But they’re on the way. And Engelhard’s research is evidence of why that progress is being made.

Annual fish hauls in the North Sea peaked in the 1980s at three million metric tonnes of cod, haddock, saithe, turbot, and halibut. Yet not even 20 years later, the region hit a historic minimum LFI of just five large fish per 100, down from an average of 30 large fish per 100 a century earlier. 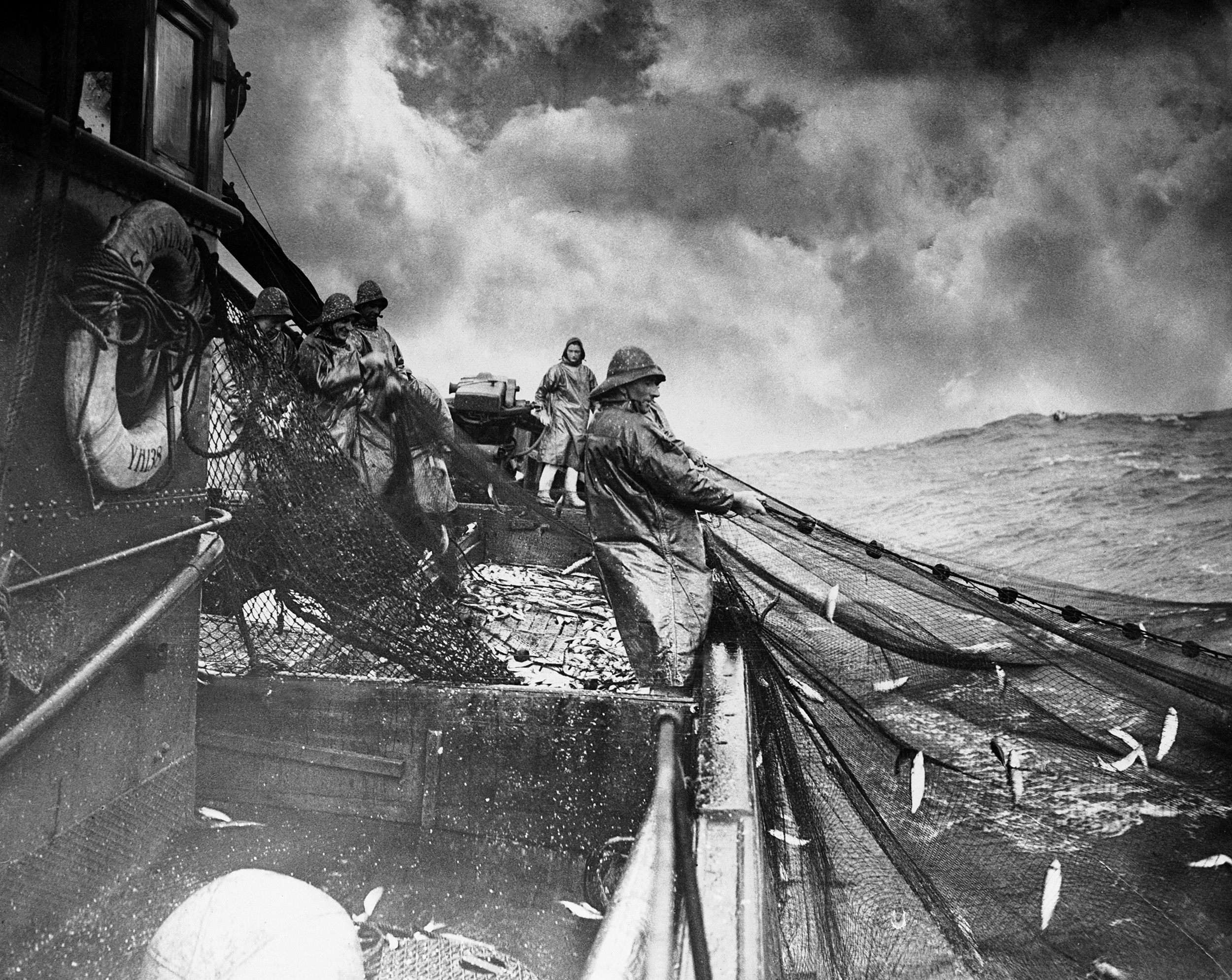 Fishermen aboard the Yarmouth haul in North Sea herring in 1935. Photo by Daily Mirror/Mirrorpix/Corbis

According to Barrie Deas, chief executive of the National Federation of Fishermen’s Organisations in the UK, the trigger for the highly productive 1980s—and the ultimate source of the crash—can be traced back even earlier, to the 1960s. In the middle of the century, unusual environmental conditions triggered a “gadoid outburst”: a massive, temporary increase in the populations of species like cod, haddock, and whiting.

Fishing fleets grew to match the expanding fish populations, but when the bubble burst, the fleets remained the same size.

“You had a fleet built up to exploit that resource,” says Deas. “Whatever environmental conditions that gave rise to the gadoid outburst fizzled out, but you still had the fleet.”

And that oversized fleet hit large fish the hardest.

“There was an imbalance in capacity to the available resources,” says Deas. “In my view, no conservation measures will ever work if you have that kind of imbalance.”

On July 14, members from the fisheries department of the European Union’s executive branch met in Brussels for an annual seminar on the state of its fish stocks. While the outlook is good for the Atlantic, North Sea, and Baltic, fisheries in the Mediterranean Sea are still heavily overfished.

In his opening address, commissioner Karmenu Vella said that establishing long-term plans for the Mediterranean is a “political priority.” But fixing the Mediterranean’s stocks isn’t as easy as implementing the same successful policies that seem to be working in the North Sea.

“A top-down command and control system where there’s legislation written in Brussels that covers all the fleets, all the fisheries, all the gears, all the sizes of vessels—is just impossible. It doesn’t work like that,” says Deas.

Regional autonomy may be the way for the Mediterranean member states to figure out their own successful fishery management policies. But they could do well to take a look at the North Sea, which after decades of unsustainable fishing practices—and policies that only further those practices—is starting to get back to normal.