Few people have gotten close enough to a shark to pet it. If you could run your hand from a shark’s head to its tail—not that you should—it would feel smooth, almost like suede. Reverse direction and it’s rough like sandpaper. Viewed under a microscope, shark skin is composed of ribbed, dragonesque scales layered over each other like shingles on a roof. These structures, called dermal denticles, are more like teeth than skin. Made of dentin and enamel, they are innervated, and their ribbed and layered pattern guides water across the shark’s back, reducing friction and drag. Sharks’ impressive skin helps them glide through the water, with some species reaching speeds as fast as 50 kilometers per hour.

Shark denticles are the envy of engineers. To mimic sharks’ impressive hydrodynamic prowess, materials scientists have designed shark-inspired surfaces for the hulls of boats, wind turbines, and even high-end swimsuits, all in an attempt to maximize efficiency.

But in a new study, researchers from Harvard University in Massachusetts, led by ichthyologist Molly Gabler-Smith, have for the first time compared materials that attempt to mimic shark skin with the real thing. As it turns out, the engineered materials have a long way to go.

Previously, scientists have examined shark denticles in impressive detail using scanning electron microscopes, a technology that can take images of structures just a few nanometers wide. But the images scanning electron microscopes put out are two-dimensional. And if you’ve ever seen a car in a wind tunnel, you’ll know that when it comes to reducing drag and friction, an object’s 3D structure is incredibly important.

So using a technique called surface profilometry, an imaging technology in which a scientist essentially uses a thin layer of gel to make a mold of the surface to be studied, Gabler-Smith and her team viewed shark skin in 3D. “It’s almost like looking at a topographic map,” says Gabler-Smith. “You can see where there’s peaks and valleys.”

Gabler-Smith used the technique on skin samples from 17 different shark species. She also looked at two Speedo swimsuits marketed as mimicking shark skin—the FS Fastskin II swimsuit and the Lzr Racer Elite 2—as well as a 3D printed surface created in her lab. She compared the proportions of the denticles and the height and spacing of the riblets and found substantial differences between real shark denticles and the artificial materials. 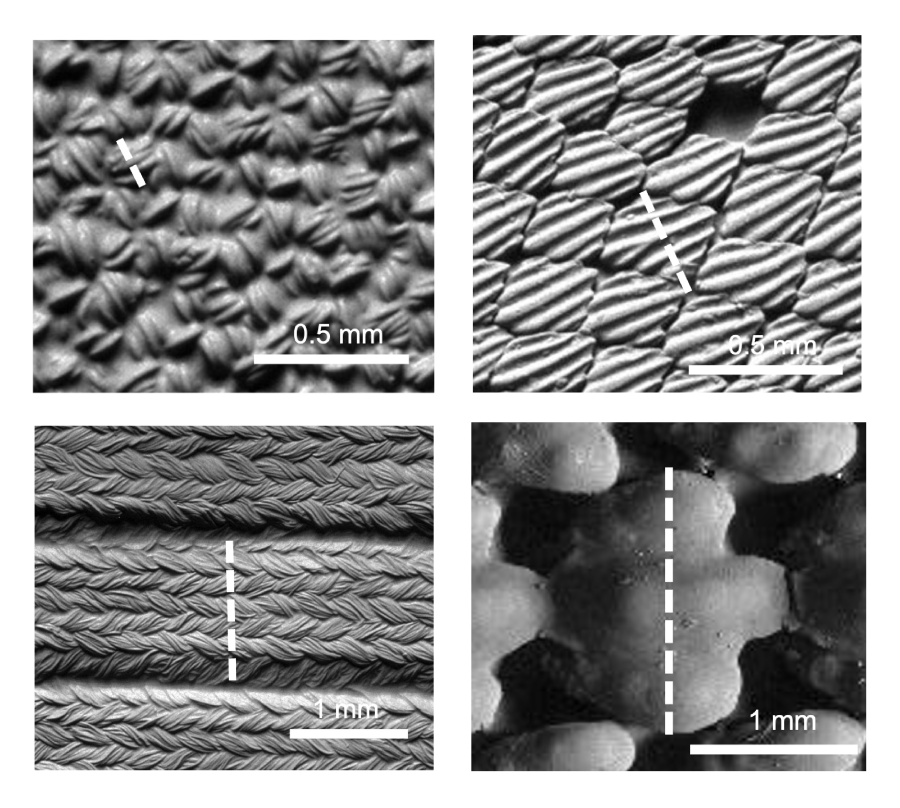 “I hesitate to say that [the swimsuits are] really mimicking shark skin, because they really aren’t at all,” Gabler-Smith says. One of the biggest differences, she says, is that unlike a ribbed fabric, real shark skin is made of hard enamel structures on a flexible surface. When asked to rate the swimsuit materials out of 10, Gabler-Smith gave the FS Fastskin II and Lzr Racer Elite 2 a three and a seven, respectively, and her lab-made engineered surface an eight or nine.

“[The swimsuit designers are] doing a pretty good job of taking all of the information that biologists are measuring from actual shark skin, but there’s still so much to do,” she adds. In theory, she says, adding riblets or other bumpy textures to swimsuits or the surfaces of watercraft should reduce drag, but these surfaces are still a way off from functioning like the real thing.

Amy Lang, an aeronautical engineer at the University of Alabama who studies shark skin and was not involved in the research, says that replicating the drag-reducing properties of shark skin is even more difficult than just having denticle-like riblets. To actually decrease drag instead of increasing it, she says, the riblets must be the right size and depth. She adds that while it is interesting to use surface profilometry to directly compare shark skin with engineered materials, it’s equally important to test how synthetic materials actually work in the water.

But now that scientists have updated information on the 3D structure of shark denticles across a variety of different species, engineers may be one step closer to mimicking one of nature’s most efficient swimmers.