These cup corals are one of the dizzying variety of coral species worldwide. Photo by Jurgen Freund/Nature Picture Library/Corbis

A human swimming down to a coral reef is like a caveman stepping out of his cave and into midtown Manhattan. In a moment, he travels from a familiar place into a wildly different one. Coral reefs are deeply weird, psychedelic places for humans, which may be why people spend nearly US $10-billion each year visiting them. At every turn, corals defy the simple categories that most people use to understand living things.

In the game of 20 Questions, everything falls into one of three categories: animal, vegetable, or mineral. Yet for centuries, no one knew where to slot corals. Roman author and naturalist Pliny determined they were neither plant nor animal, but should be considered a third type of living thing. Swedish botanist and zoologist Carl Linnaeus classified them as “lithophytes” (rock plants). Eventually, microscopes revealed the truth: corals are animals, built of tiny, soft-bodied polyps, each with a whorl of tentacles somewhat akin to petals. Yet the suggestion of a plant persisted, and today corals belong to the aptly named class Anthozoa, or “flower animals.”

But the flower-like polyps are just the surface of a coral—its living skin. The solid mass beneath is its permanent legacy. Each polyp builds a tiny calcium carbonate base that welds it to its colony, which, depending on the species may be shaped like a brain, or a cluster of pillars, or even a branching tree. New polyps build on top of the old, growing the colony and the reef. It’s evocative of a human city: the corals build elaborate stony infrastructures and then live within them. Clearly “mineral” shouldn’t be completely dismissed.

That infrastructure, with its decorative, almost cartoonish, shapes and textures, can seem inanimate and harmless. But corals’ surfaces are actually optimized to hurt: polyps use tiny stinging cells to snag food such as plankton as it drifts by.

Even their striking colors have an unexpected source. To a human, the hot pink, vivid orange, and highlighter yellow hues evoke something artificial such as paint. But the colors have natural sources: the fluorescent pigments used by a polyp to control the amount of light it lets in, and the photosynthetic pigments of the tiny single-celled algae living symbiotically in the polyps’ tissues. Through photosynthesis, these algae (called zooxanthellae) transform sunlight into oxygen and produce nutrients such as glucose and amino acids for the polyp, which provides shelter for the algae in return. Corals, then, are animals that contain “plants” (the algae) and secrete stone. It’s no wonder why pegging coral as animal, vegetable, or mineral in a game of 20 Questions might be a stumper.

Corals may lie outside neat categories, but they haven’t escaped the havoc we’ve brought to their environment. The list of assaults is long—there’s pollution, physical destruction from fishing, and, looming above all, the promised devastation of global warming. Excessively warm water stresses corals and zooxanthellae vacate, leaving bleached coral skeletons haunting the ocean floor, and oceans impoverished. The World Wildlife Fund estimates that healthy reefs provide $29.8-billion each year in global economic impact, such as biodiversity, fisheries, and protection from coastal erosion. Other estimates of ecosystem services put the figure much higher.

Economic valuation helps justify and spur conservation, but it’s also a limited framework that casts corals as mere agents of human wealth and well-being. Corals are more than service providers: they are a reminder that the world is much bigger than we are.

This photo essay explores the beauty and the biology of coral. 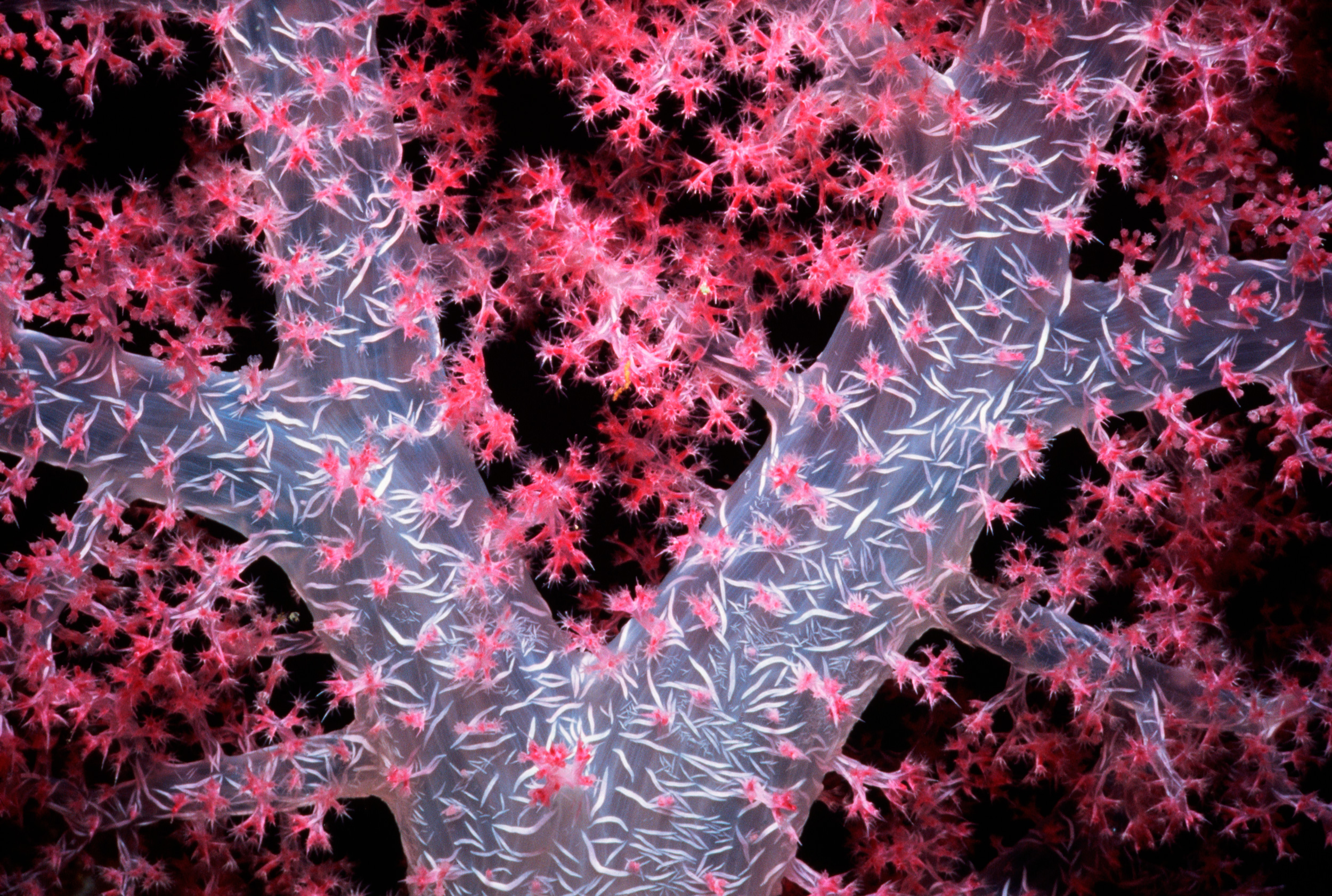 Corals share the phylum Cnidaria with anemones, hydrozoans, and jellyfish, animals that use their characteristic stinging cells, called cnidocytes (cnid is Greek for nettle), for food and defense. Cnidocytes fire tiny, toxic, spring-loaded barbs (called nematocysts) when they’re touched, stunning the offender before devouring it. Depending on the size of the polyp, the toxicity of the cnidocytes, and their ability to pierce, a polyp’s prey ranges from plankton to small fish. This soft coral, above, extends its polyps to snare zooplankton out of the water. 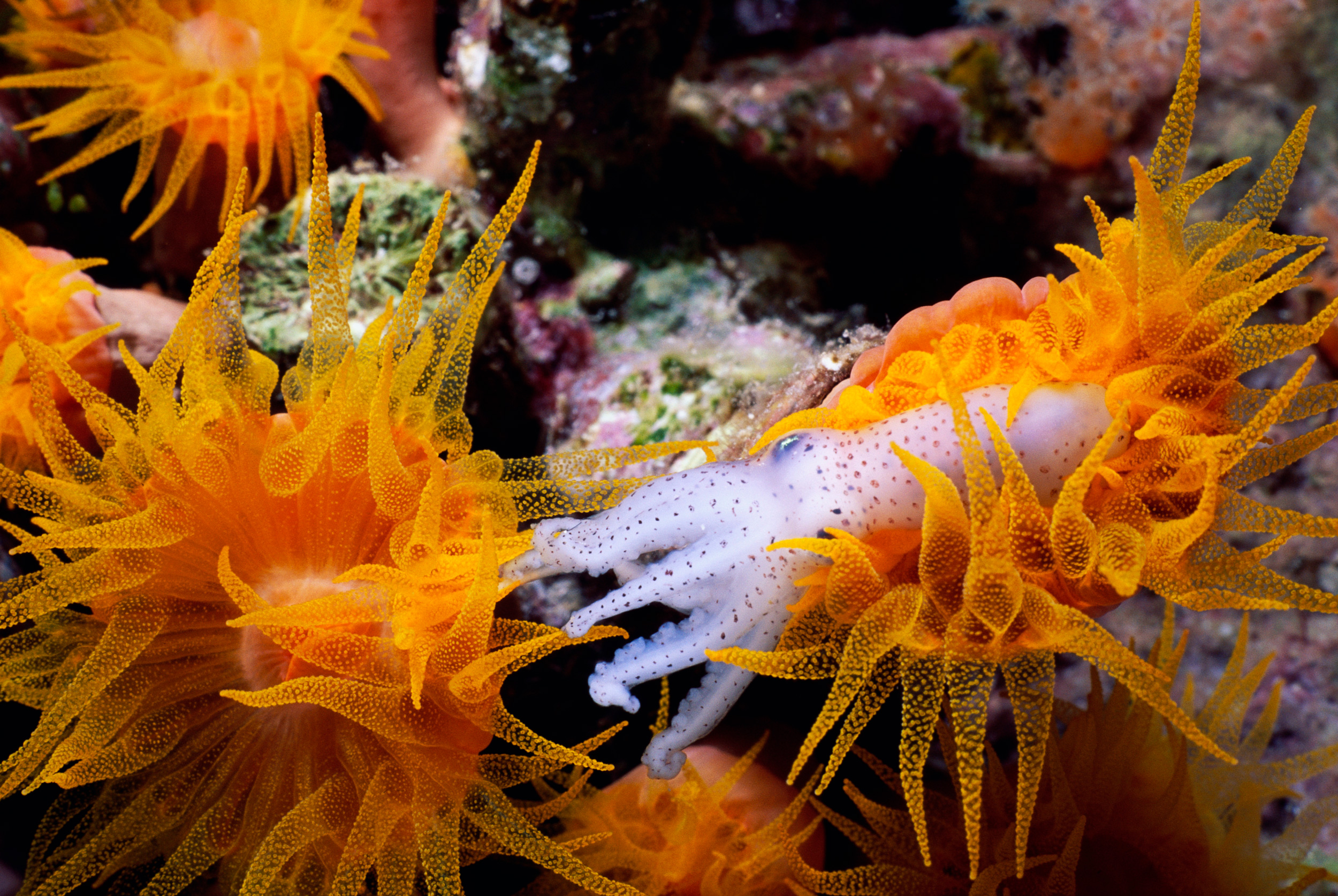 People don’t feel the sting of most coral species because their nematocysts are too tiny to penetrate human skin, but these barbs can capture plankton, tiny fish, or even a baby octopus, as shown here being consumed by an orange cup coral, a solitary species that does not build reefs. Tentacles pull the prey into the polyp’s central mouth that leads to the stomach, where the food is digested and absorbed. Waste is excreted out the same opening. 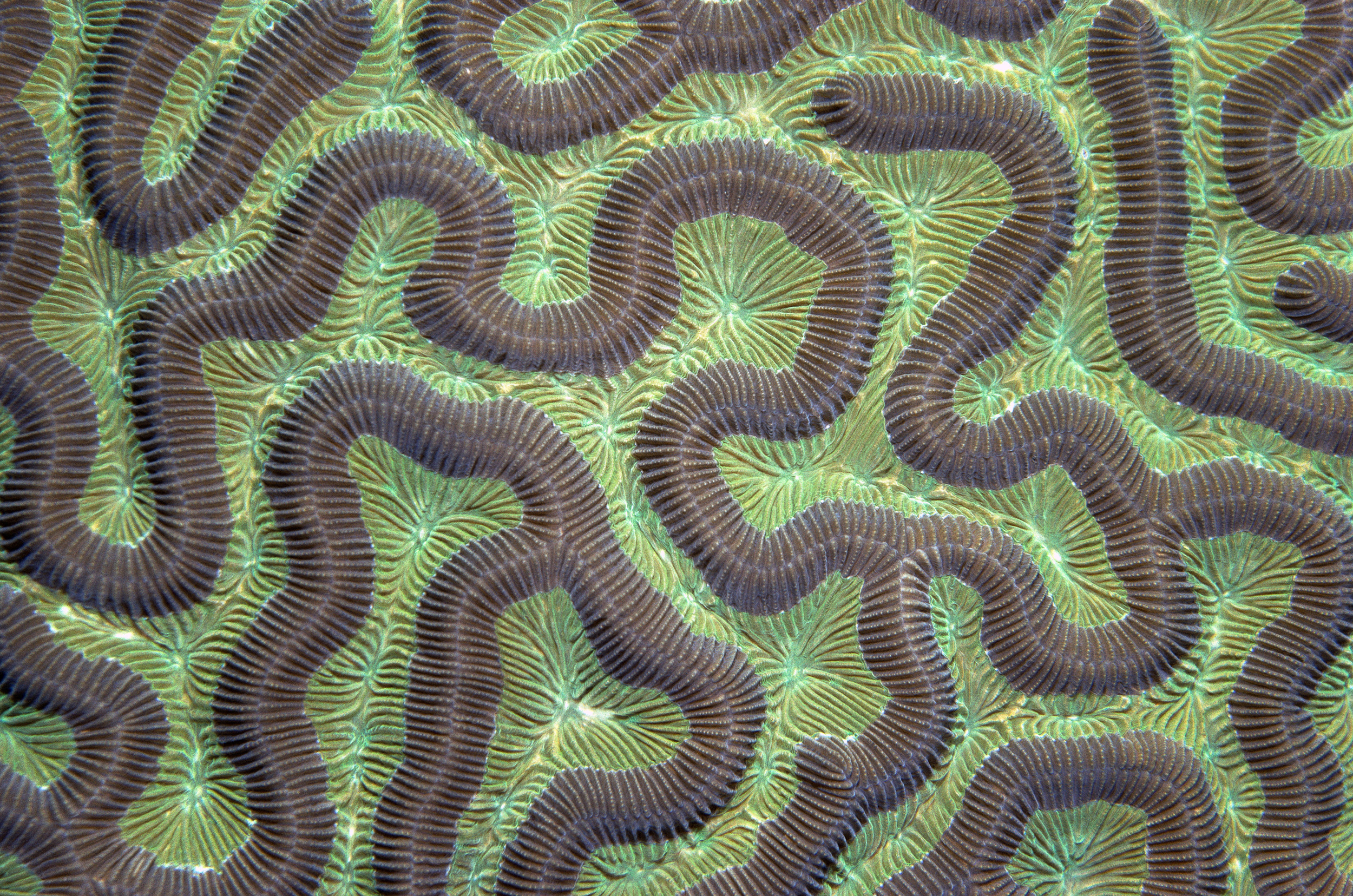 Some corals retract their tentacles during the day and only extend them at night to trap food. Here, the polyps rest inside the valleys of a brain coral, a type of stony coral. The densely packed polyps are connected within the coral, so if one polyp makes a catch, the nutrients can be shared. 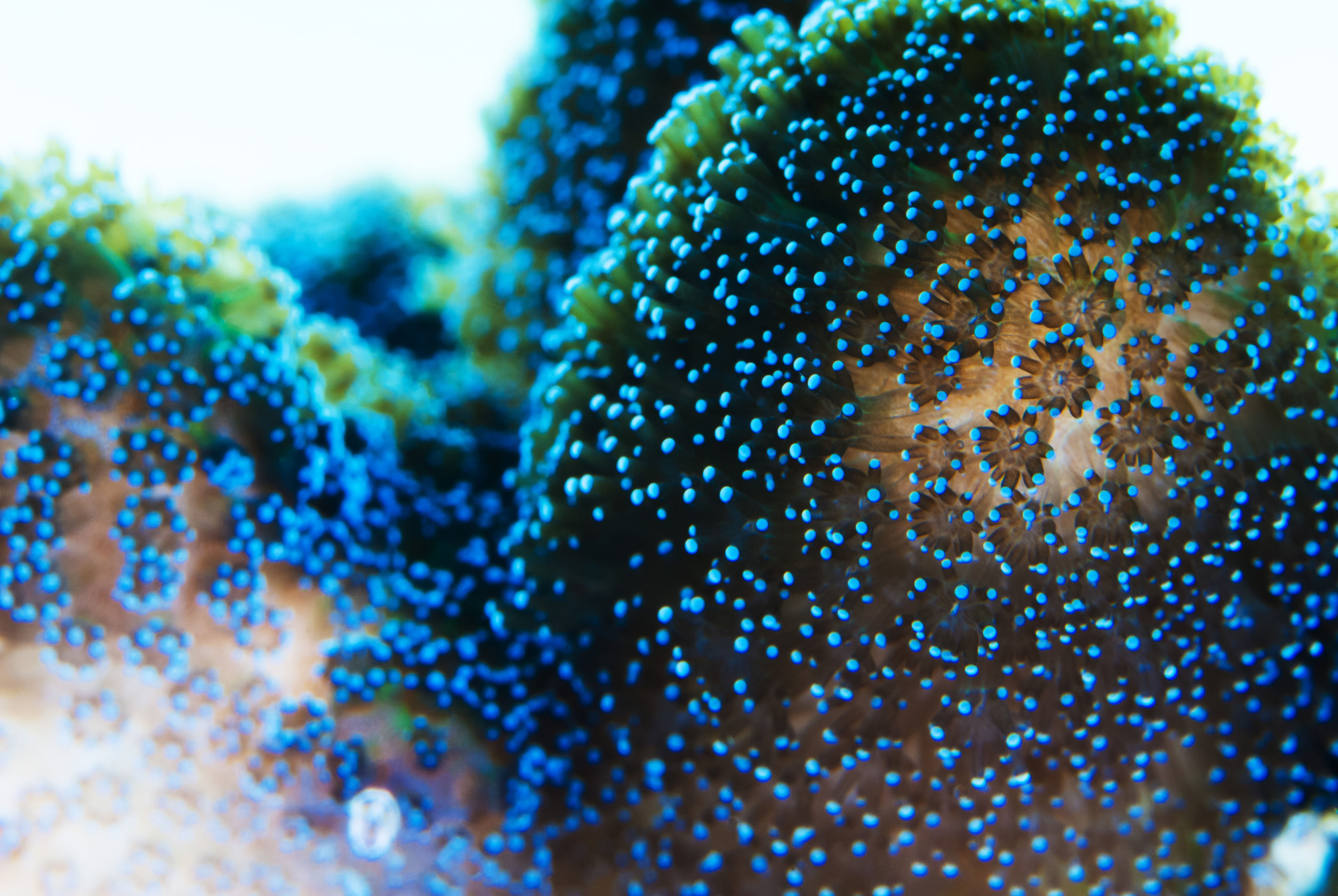 Corals search their surroundings for food, but their most important source comes from within—food created by the symbiotic algae, the zooxanthellae, living in their tissues. Their chlorophyll pigments add a greenish brown hue, as shown in this species. The algae photosynthesize and provide the coral with oxygen as well as glucose and proteins. It’s a symbiotic relationship that works for the coral, because while clear, tropical water may seem like paradise to us, to a coral the waters are barren. There is little upwelling in the tropics, creating clear, but very nutrient-poor water. 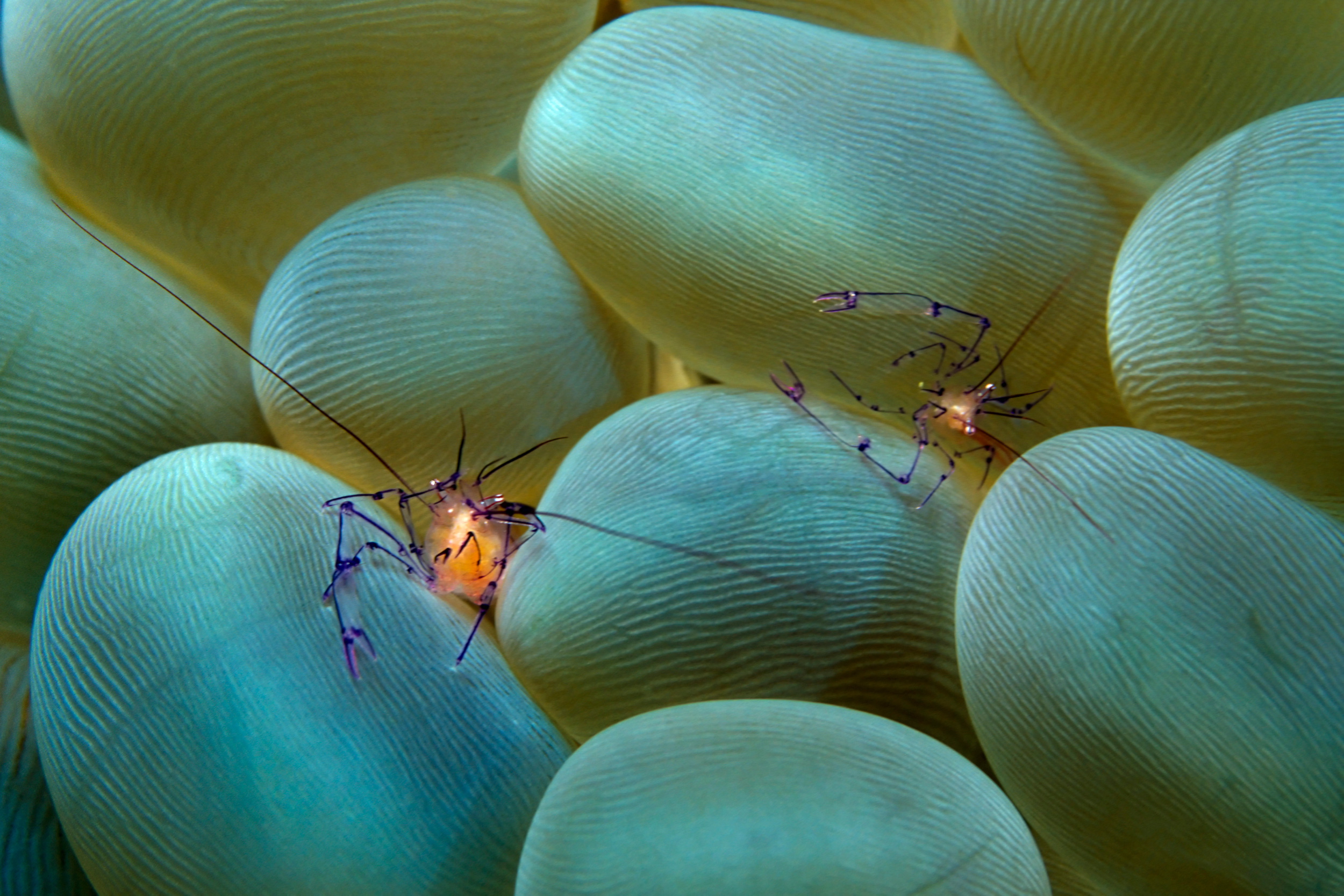 In many ways, the open ocean is like an aquatic desert—a huge, empty space where food is rare and starvation is easy. In this “Seahara,” coral reefs are oases that draw reams of creatures. It’s all about food: reefs promise a reliable supply of it, and for its denizens, that reality outweighs the heightened risk of becoming food in turn. Coral reefs are so popular that while they cover just two percent of the ocean floor, they shelter a quarter of all marine species. Indonesia’s Coral Triangle is one of the most biodiverse places on the planet, with more than 600 reef building coral species, 2,228 species of reef fish, and six of the seven known species of sea turtles. With all those marine species, there are endless types of relationships. Some see a buffet, while others survive by creating more complex interactions. These tiny shrimp have found their niche, literally. During the day, they conceal themselves from predators in the plush crevices of a bubble coral and only emerge to feed at night. 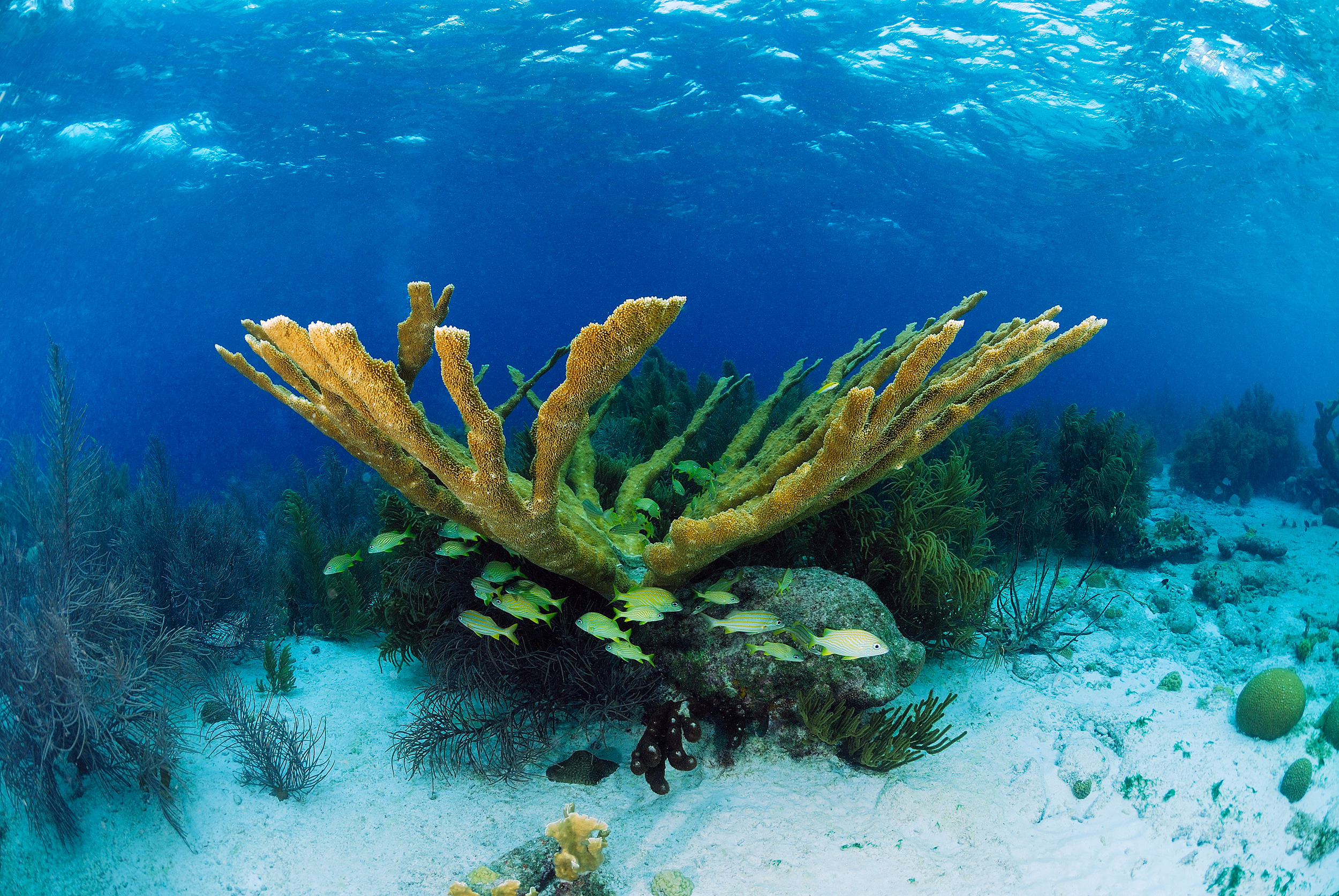 Stony corals that secrete minerals and create hard, rigid skeletons are the backbone of reefs. Massive growths of stony corals form reefs that shelter fish and absorb energy from the waves that crash and churn in shallow waters, keeping the sea bottom intact. The corals grow by biomineralization, a process that starts when the young coral polyp uses seawater to create calcium carbonate crystals. Soon, a tiny stone cup forms around the base of the polyp bonding it to the reef, its permanent home. As new polyps grow atop the dead ones, they lay down their own layer of minerals, and the colony grows. The aptly named elkhorn coral, above, dominated the Caribbean until about 1980, when disease and bleaching decimated them. Today, elkhorn corals are threatened, and the International Union for Conservation of Nature’s red list lists them as critically endangered. 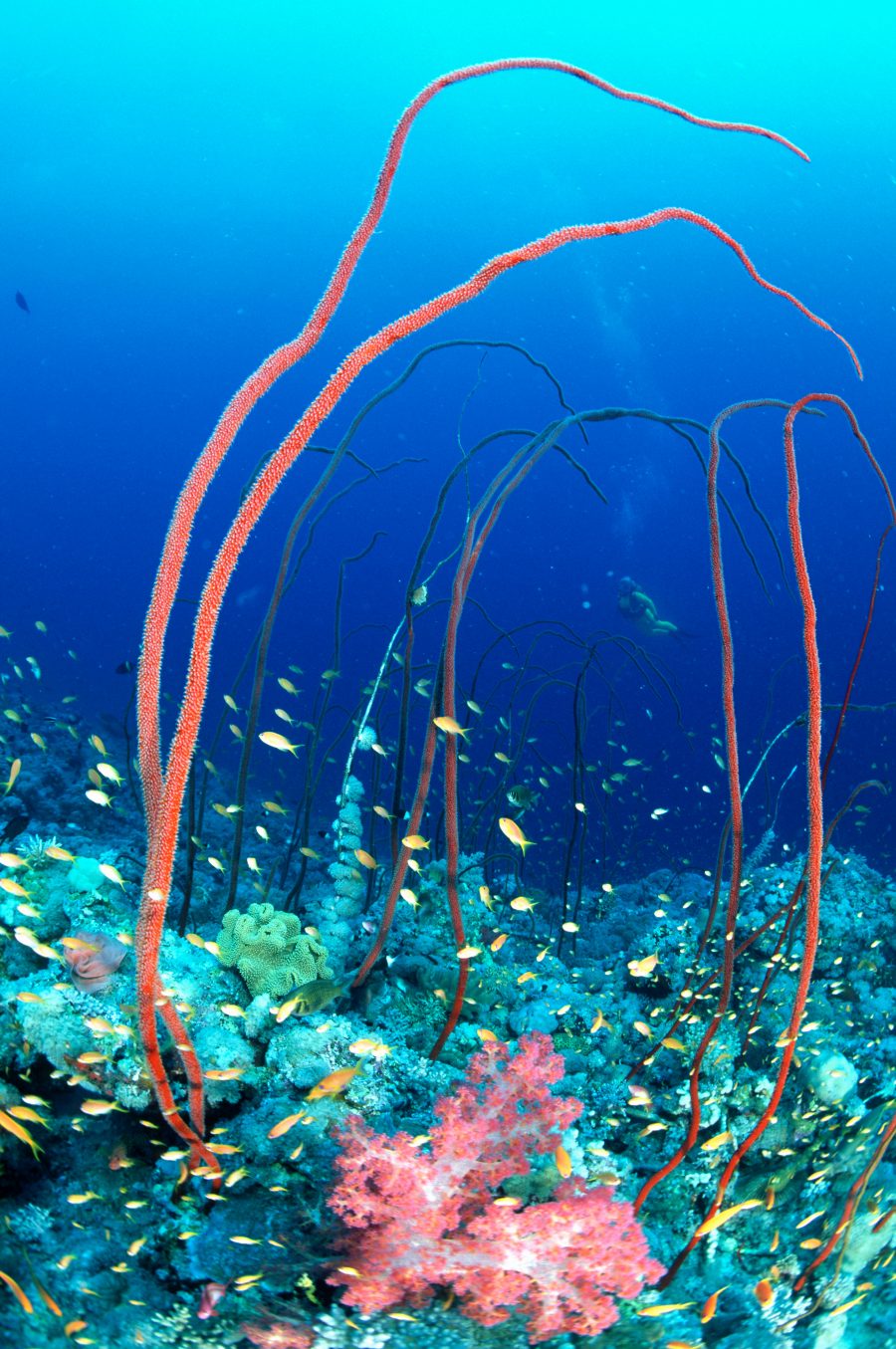 Reef-building stony corals—such as pillar, brain, or elkhorn corals—are hexacorals, with six (or a multiple of six) tentacled polyps, each surrounded by a hard cup. In contrast, octocorals, with eight tentacles, lack hard external skeletons. Instead, these sea pens, sea fans, and sea whips (shown here) use a protein called gorgonin and calcareous deposits to give some rigidity to the soft cells that form sweeping, willowy shapes. 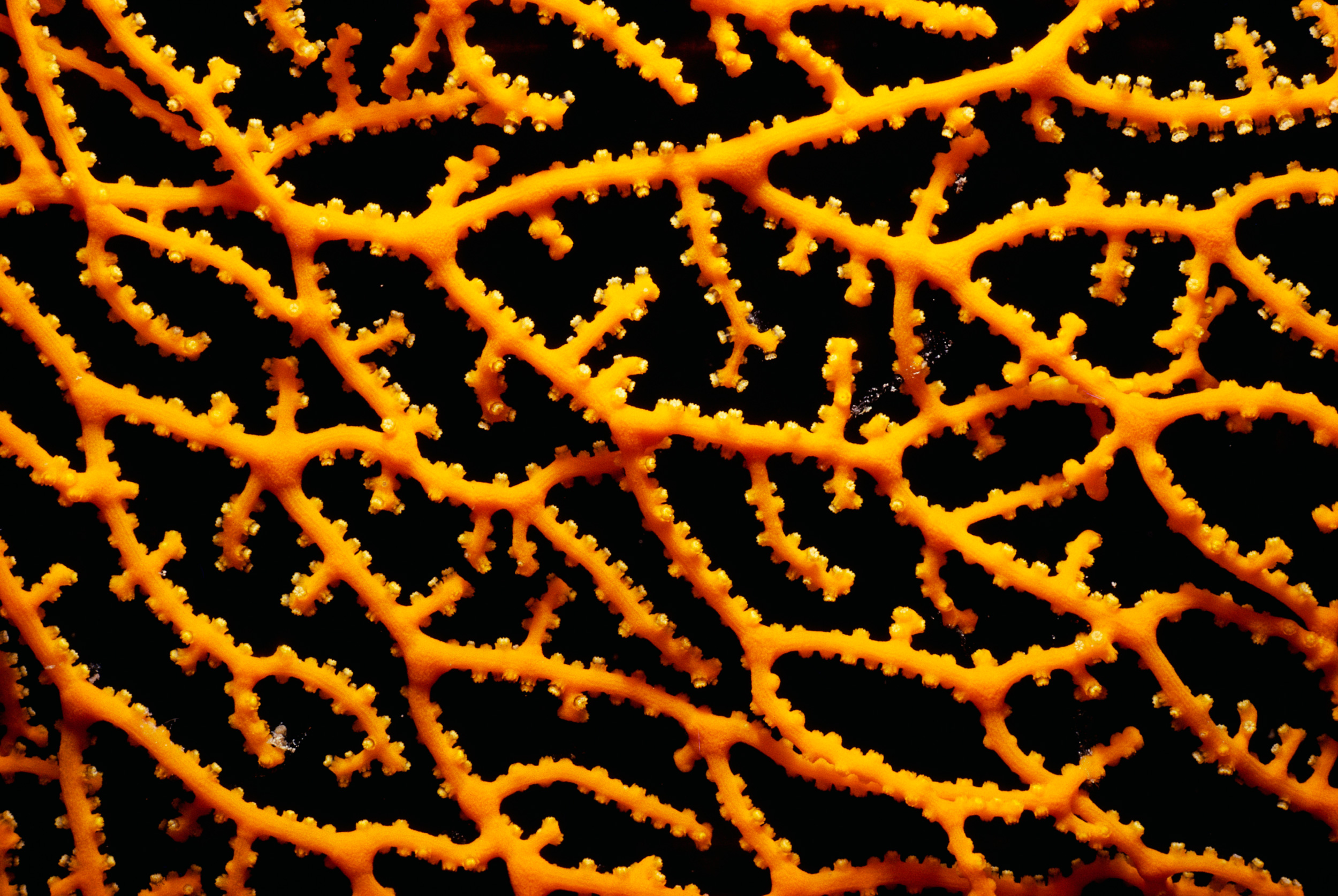 The brilliant colors of some coral species come from different pigments. Photosynthetic pigments in the zooxanthellae, such as chlorophyll, absorb and use certain wavelengths of light and reflect the rest. Other fluorescent and non-fluorescent pigments in the coral absorb and reflect different wavelengths, too. For millennia, people have harvested red corals, such as this sea fan from the Red Sea, for jewelry or decoration. (That’s likely why this particular shade of red-orange is known as “coral.”) These soft corals have pigments in their spicules, the stiff structures in the outer cells that provide shape to the corals’ branches.

Not all corals need zooxanthellae to flourish. Some grow in deeper waters where there is not enough light for photosynthesis. These corals survive by snaring zooplankton with their tentacles and nets of mucus. This black coral has a flexible skeleton made of protein, not minerals. Its structure looks much like barbed wire, with small polyps sprouting off a central stalk, sometimes growing into a lush, bushy shape. It is also long-lived—one black coral colony was radiocarbon dated as being more than 4,000 years old. 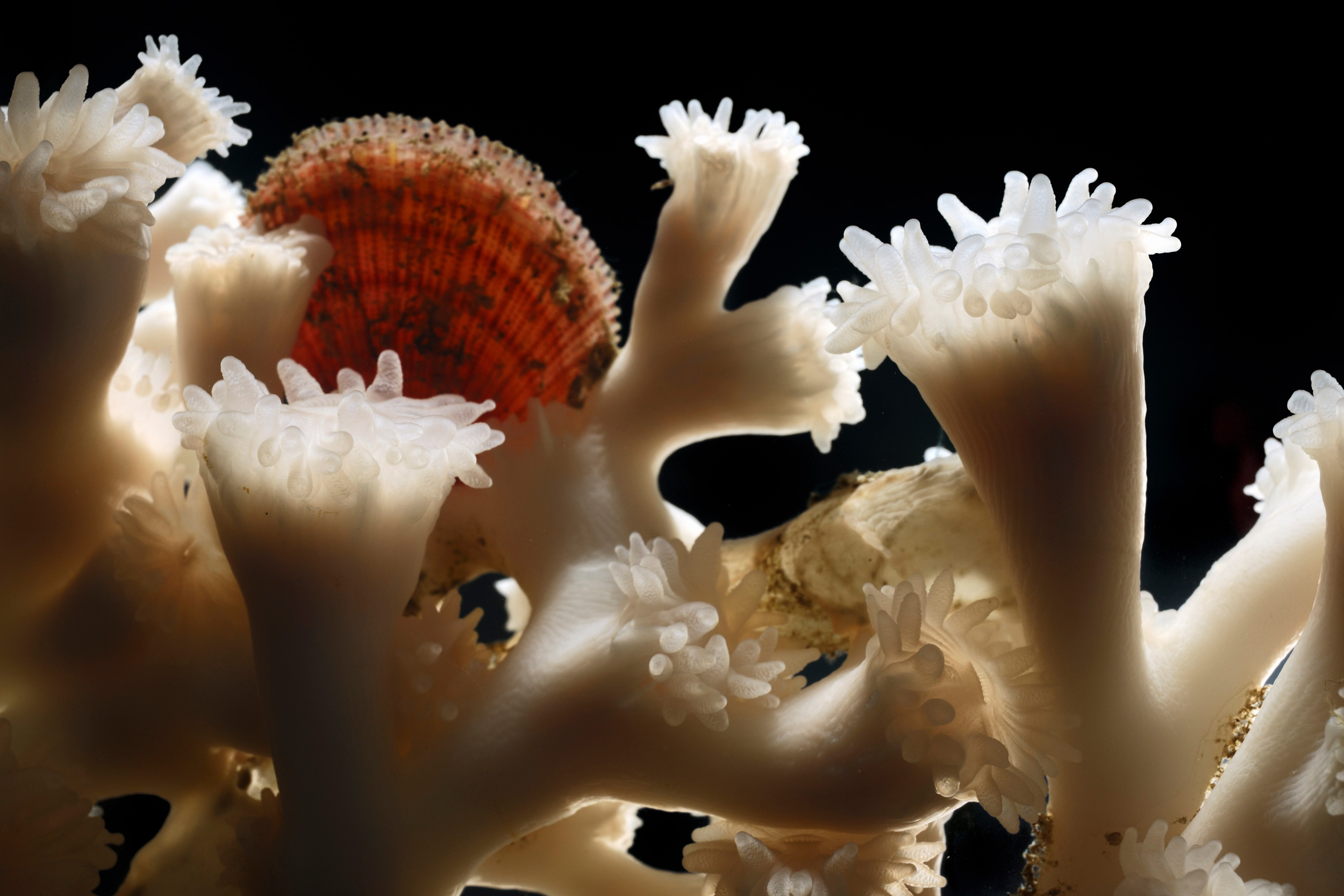 The most dramatically colorful reefs fringe tropical shores, but some delicate corals live as far north as the Arctic. The stony, cold-water species Lophelia—literally “tuft of suns” —lives in deep, cold waters, from the North Sea (where it encrusts the legs of oil rigs) to the coasts of Norway and Iceland. This coral lacks zooxanthellae, which is why most are snowy white. To survive, Lophelia grows in high-current areas, where an abundance of food drifts within snaring distance of its tentacles. 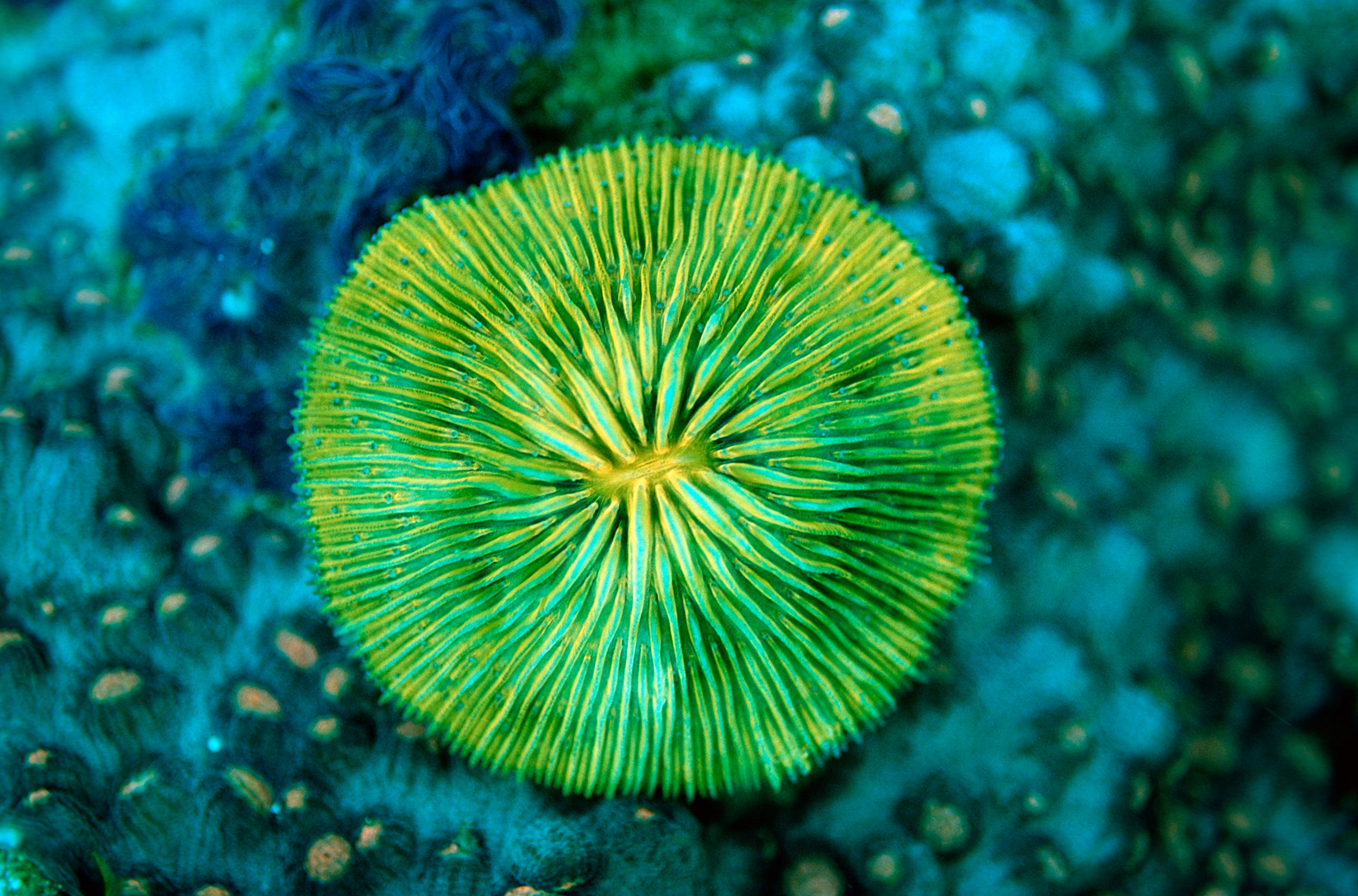 Most corals have thousands of polyps, but not the loner mushroom coral. Instead, its single polyp can reach eight or nine centimeters in diameter. A polyp that big has some tweaks to the basic body plan: some have more than one mouth, and many move around in search of food instead of attaching to rock or other corals. 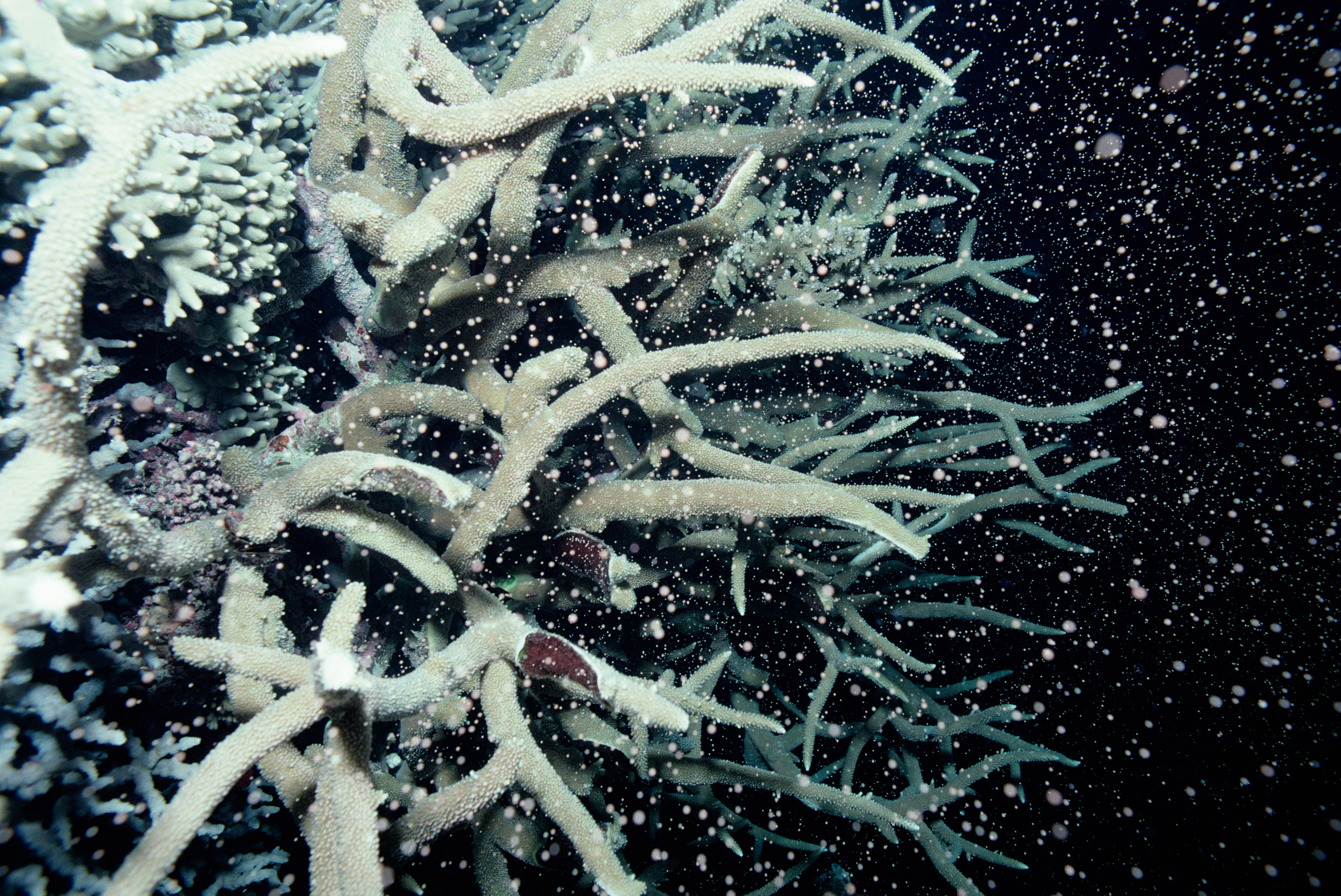 Like their forms and colors, corals’ sex lives are full of variety. Some species have distinct male or female polyps, while others are hermaphroditic or can alternate gender. For many corals with single-gender polyps, certain celestial cues, such as a full moon, trigger the polyps to release massive clouds of sperm and eggs that flood the seas in one big, soupy, gamete-drenched free-for-all, as shown above. The resulting fertilized eggs drift through the water and become polyps when they settle on a surface and begin to grow. Brooding corals use a different strategy—they fertilize their own eggs. Other species reproduce asexually, budding new polyps that grow on top of their progenitors or drift about before landing on a new surface. 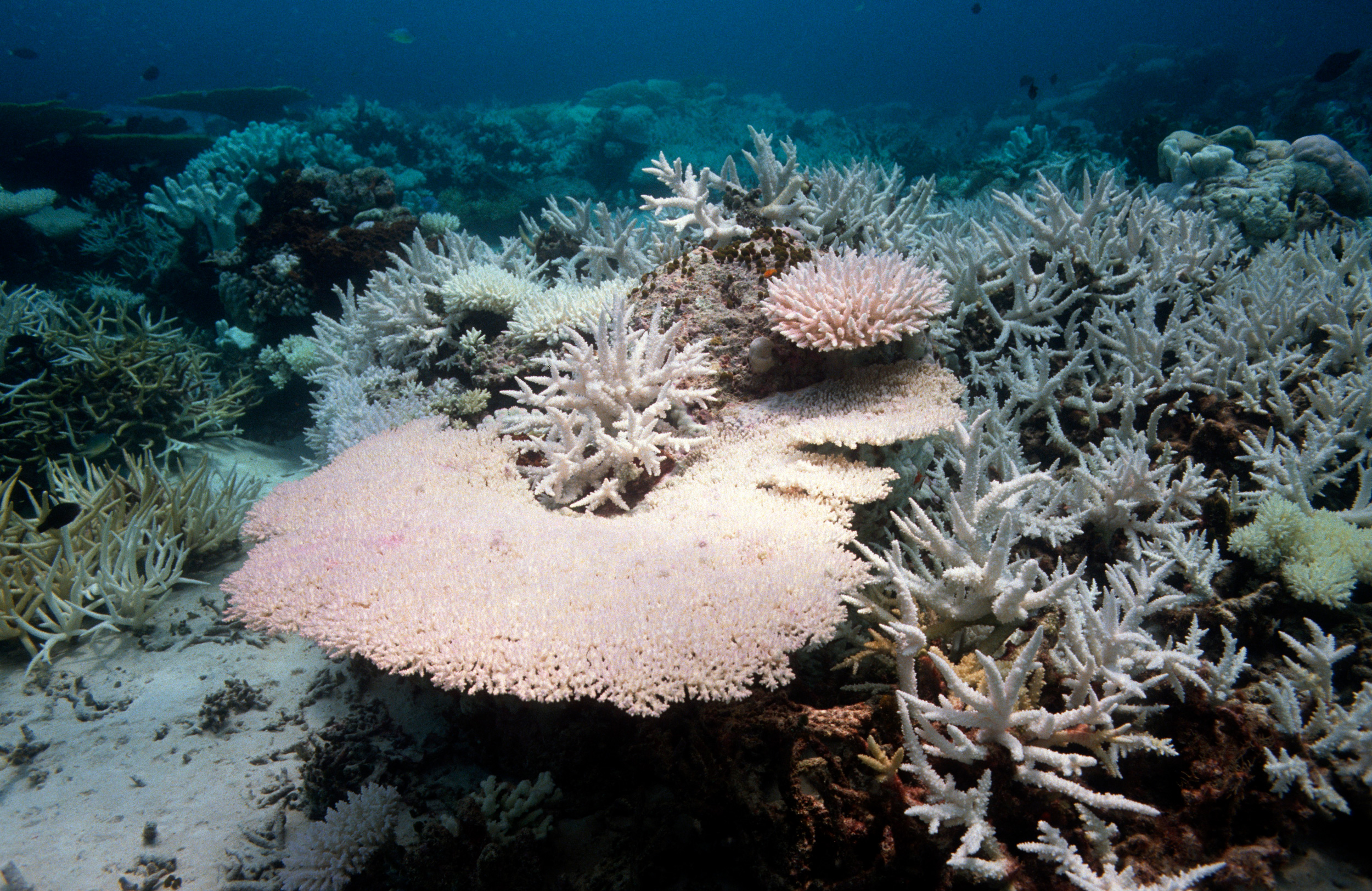 The zooxanthellae giveth the coral their color, and they can taketh it away when they leave. Corals jettison their zooxanthellae when they’re stressed, leaving them bleached and white, like these washed-out corals above. The corals aren’t dead, but they can’t get the oxygen and vital nutrients that the symbiotic algae provide. Pollution, very low tides, or even unexpected pulses of cold water can result in a bleached reef, but climate change is the cause of recent large-scale bleaching. Luckily, zooxanthellae floating in the surrounding water can repopulate the corals if conditions change, and corals can recover if the impact isn’t too severe or protracted.