Coral reefs get all the press, but there are many creatures, such as this lizardfish, living in the sandy expanses surrounding the reefs. Their superpowers? Camouflage, toxins, ambush, and stealth. Photo by Klaus M. Stiefel

When scuba divers visit the world’s tropical oceans, they typically come to admire coral reefs, and for good reason: they are some of the most diverse, and most beautiful, ecosystems on Earth. But the sandy plains between coral reefs are not devoid of life; the animals living there are just harder to spot. Without coral branches to hide in, the featureless sand can be dangerous, so the animals are often concealed by camouflage, sometimes using venom as added protection. For an observant diver swimming at a leisurely pace, the sand is rich in unusual animals. The following photographs were taken in the Philippines at Negros Island, Malapascua Island, and Subic Bay just north of Manila. 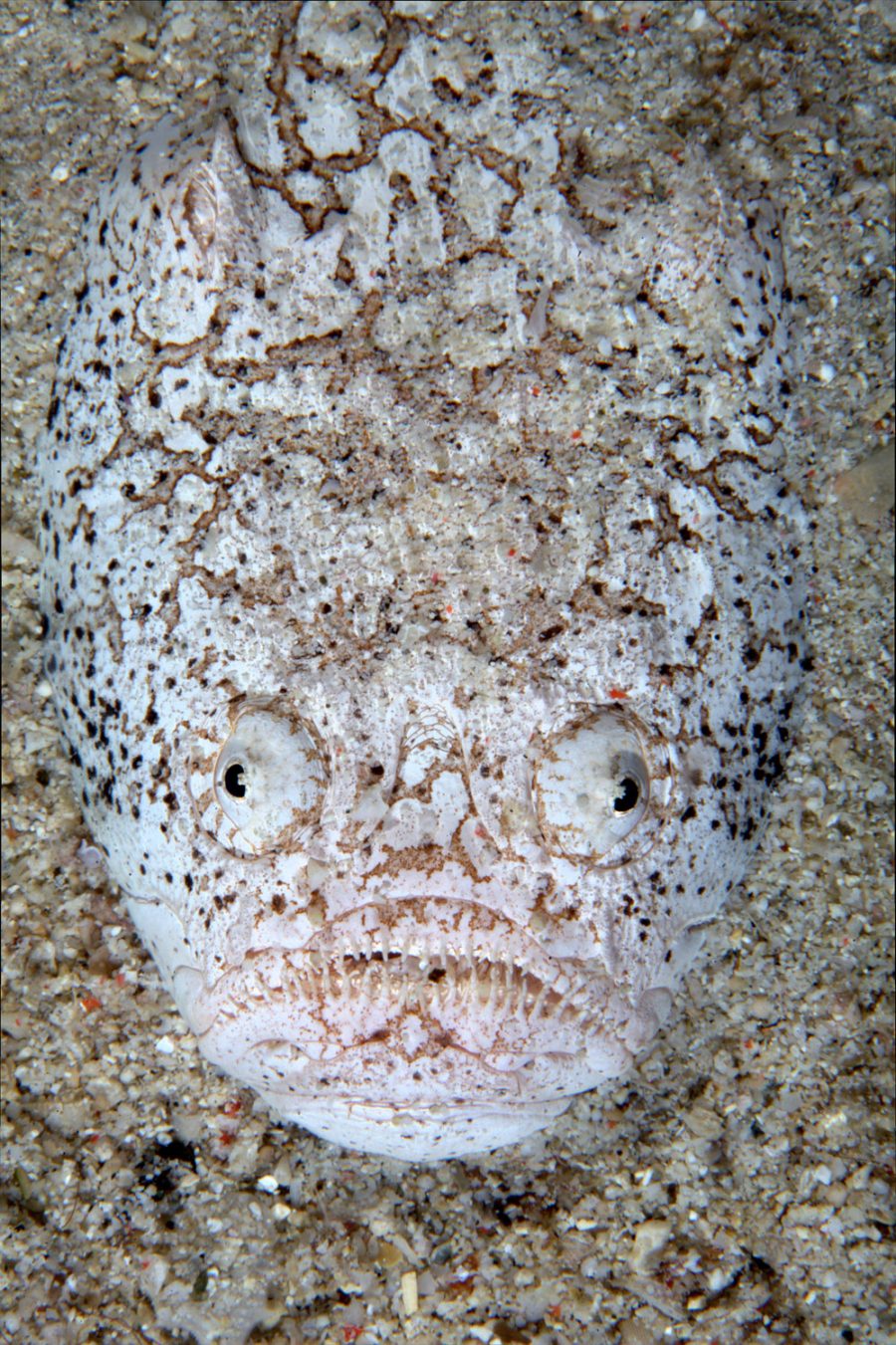 When it’s ready to hunt, the stargazer (Uranoscopus sulphureus) hides in the sand with only its mouth and eyes sticking above the surface. The venomous spines on its back are toxic to predators and can be dangerous to humans as well. 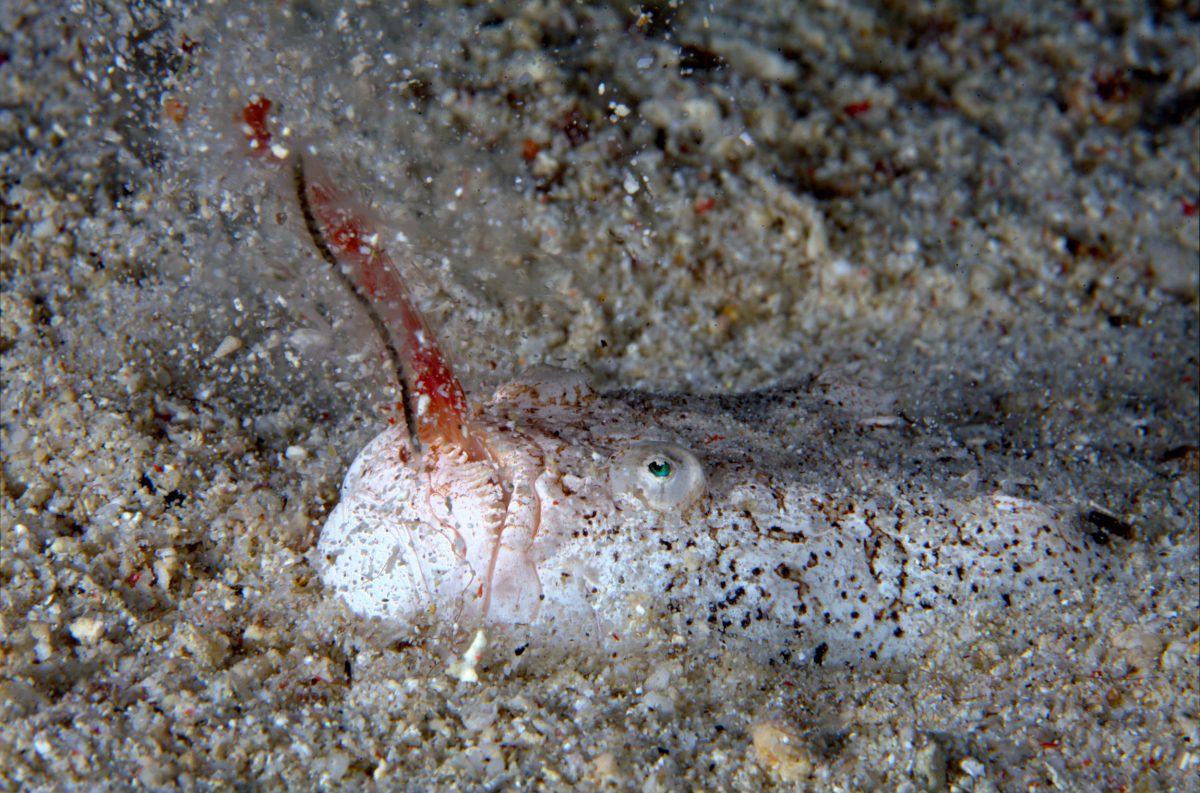 Stargazers often use their tongue-like lure to attract prey within striking distance. Then they move quickly, darting upward at high speed to grab their victim. This bait-and-wait predation strategy is energy efficient as the fish makes no effort to stalk or pursue its prey, relying instead on camouflage and ambush. 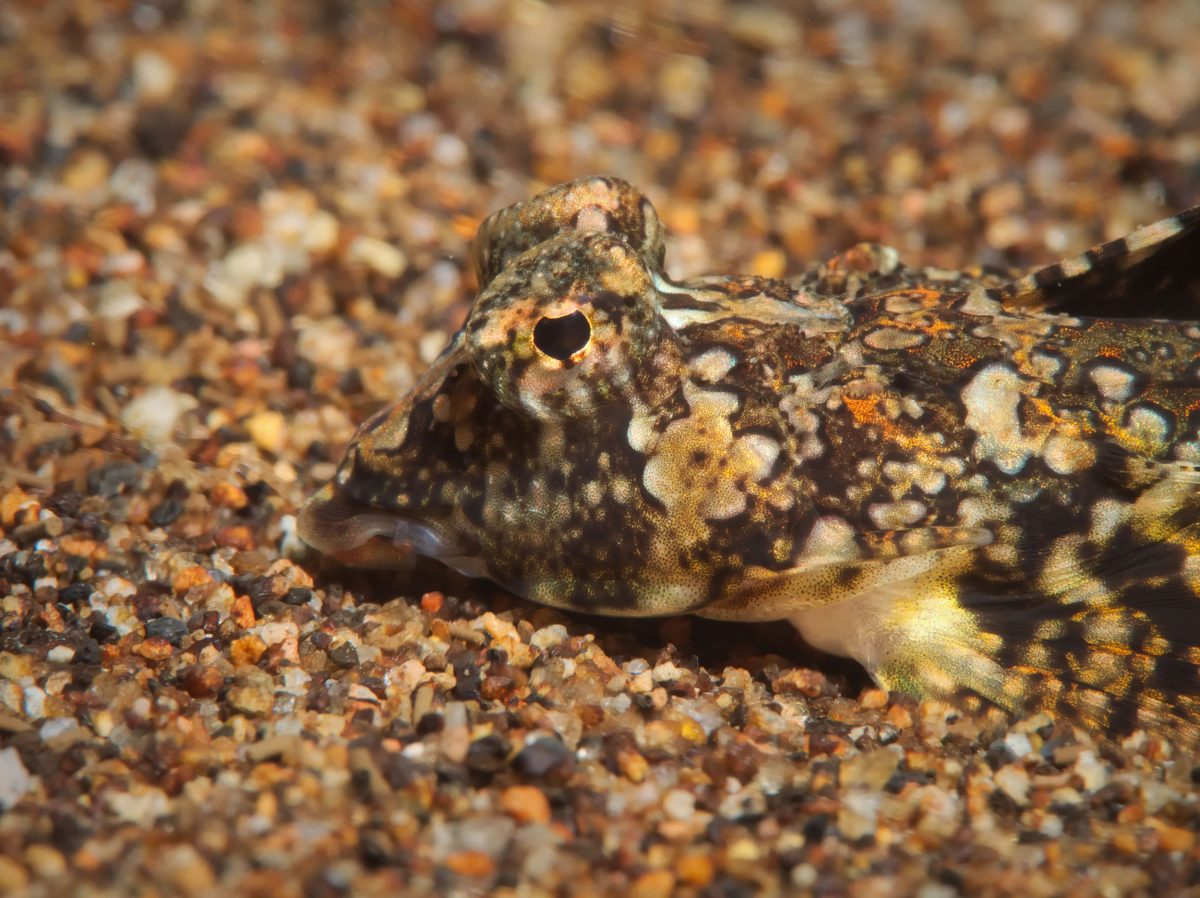 The color and texture of the dragonet (Callionymus sp.) match the sand precisely. To avoid drawing attention to its position, the fish largely remains motionless, only occasionally darting over the sand for short distances. Its pointed, sucker-like mouth is specialized for preying on tiny crustaceans living in the sand. 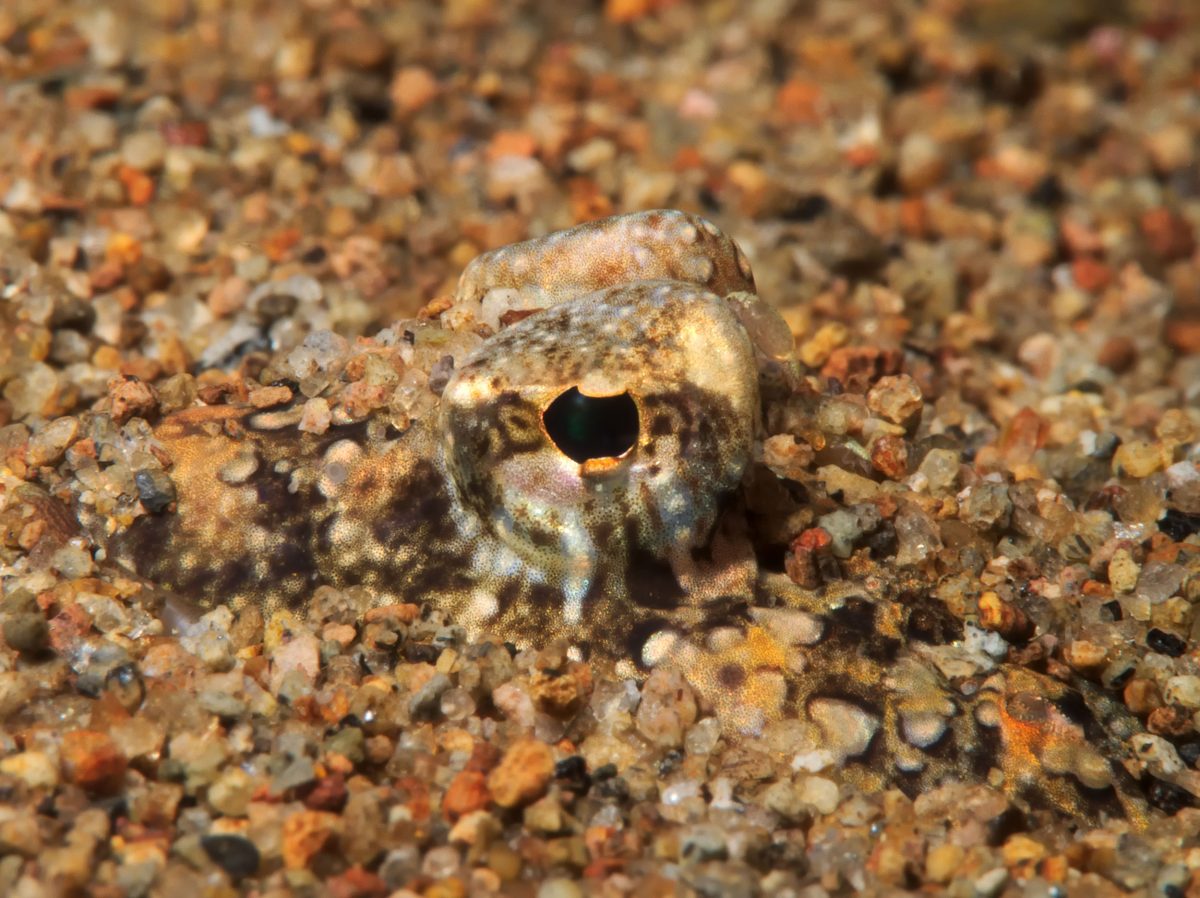 If a predator comes too close to the dragonet despite its efforts at camouflage, the little fish buries itself in the sand leaving only its attentive eyes sticking out. As with many animals living in the sand, its eyes are situated on top of the head, rather than on the sides, to allow for a wider field of view over the sand’s flat surface. 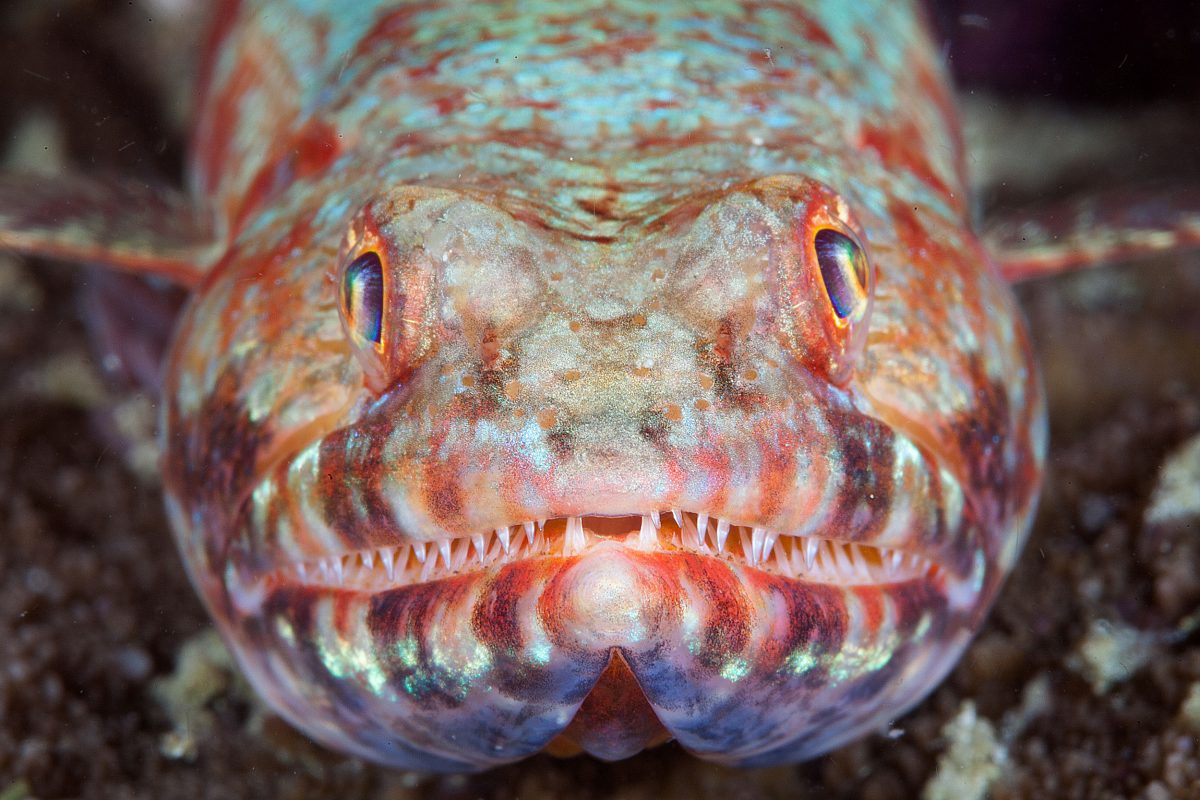 The lizardfish (Synodus variegatus) is another ambush predator lurking on the surface of the sand. Motionless unless it’s lashing out at prey, and not easily disturbed due to the self-confidence that comes with a mouth full of sharp teeth, lizardfish are great photo subjects that can be closely approached. 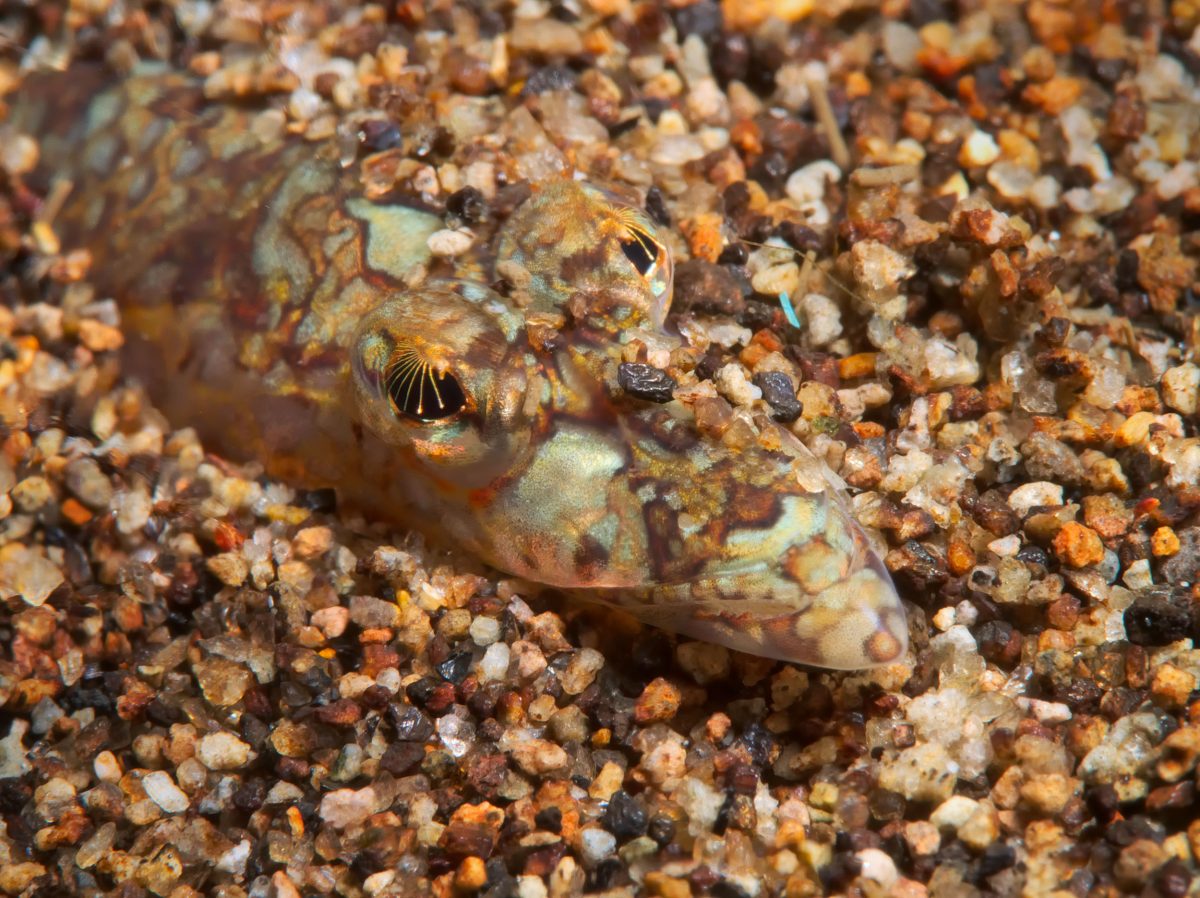 The elegant sand diver (Trichonotus elegans) also has skin the color and texture of sand. Although they are usually buried with only their heads poking out, the pencil-length sand divers sometimes hover in small groups—often one male with several females—above the sand. The larger males, with their flamboyant pectoral fins and long, filamentous dorsal fins, perform displays to mark their mating territory. 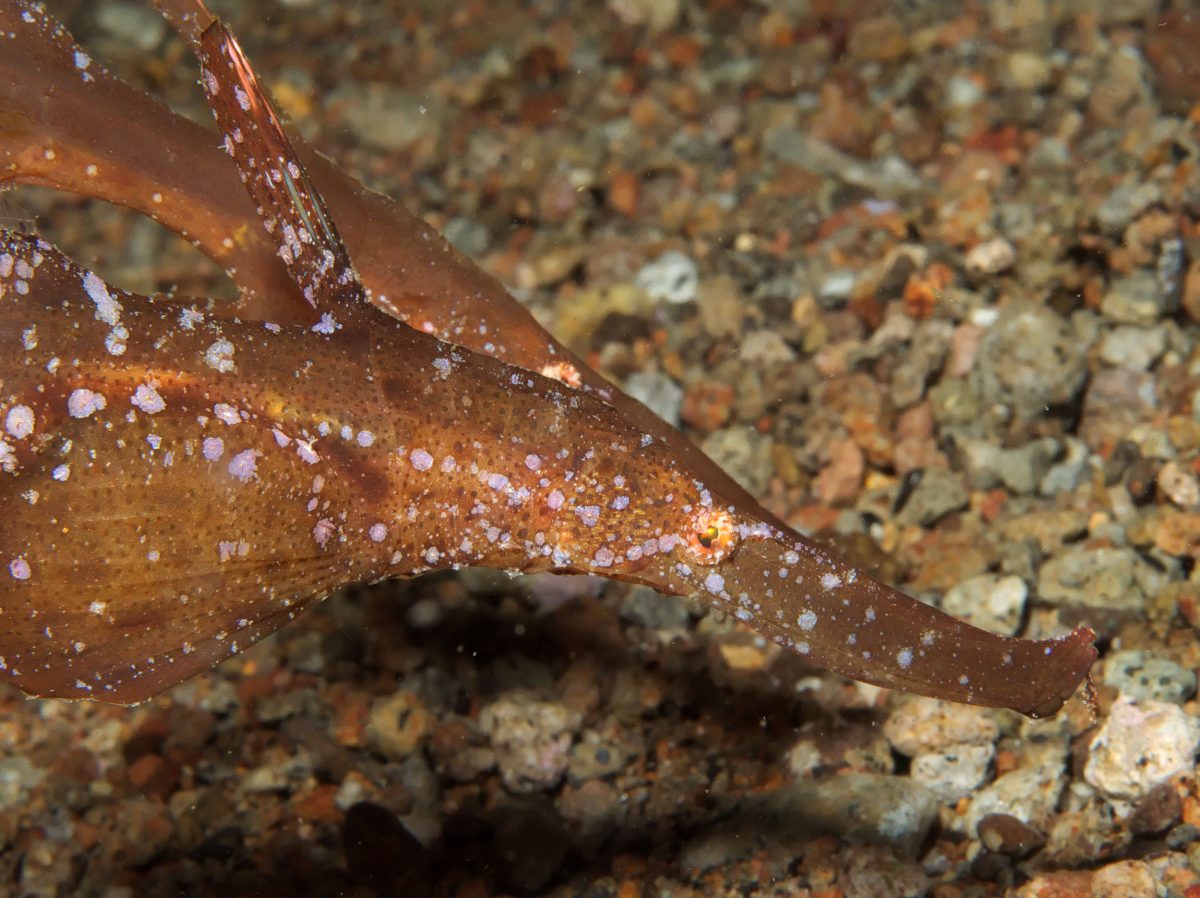 In color and shape, the long, thin bodies of these two robust ghost pipefish (Solenostomus cyanopterus) resemble drifting leaves, providing camouflage from predatory fish. Like their seahorse relatives, ghost pipefish brood their eggs. But while male seahorses brood the eggs in an abdominal pouch, it is the female ghost pipefish that keeps the fertilized eggs safe in a pouch formed by her pelvic fins. 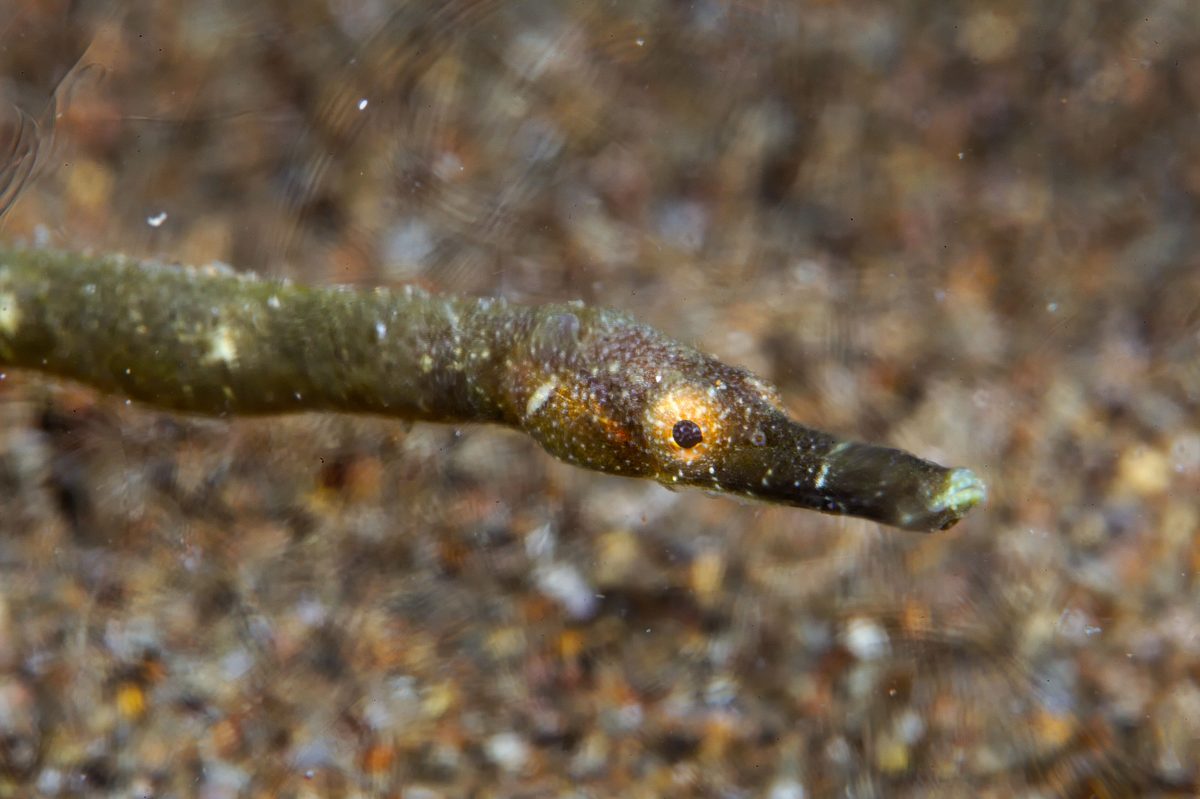 This fish masquerading as a stick is another seahorse relative, aptly called the stick pipefish (Trachyrhamphus longirostris). It rests motionless on the sand, so is easy to miss even though it can grow longer than an adult’s forearm. With its pipette-like mouth, the fish sucks up tiny crustaceans from the surface of the sand. Note the convection in the water behind the pipefish—it is geothermally heated water rising through the sand off the coast of Negros Island. 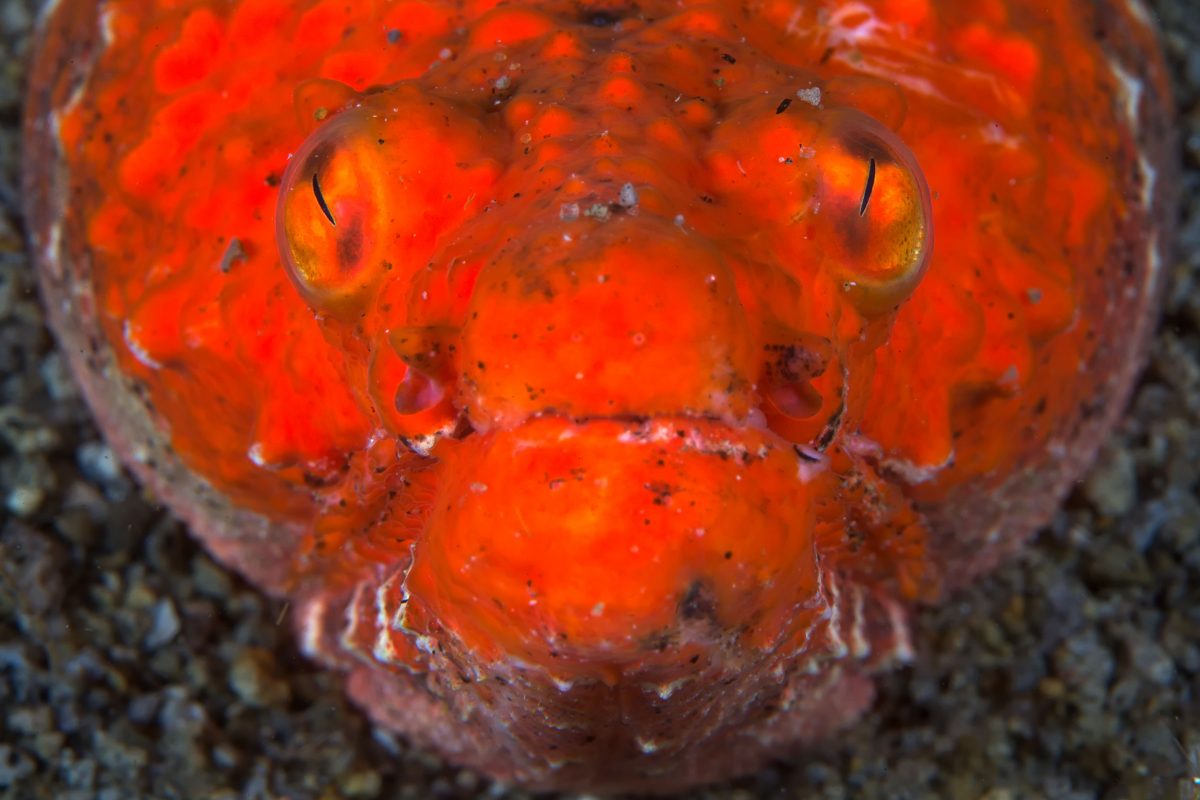 The snake eel (Brachysomophis henshawi) spends most of its life buried in the sand waiting for passing prey, with only its brilliant red head sticking out. The vibrantly colored and irregularly shaped head of the snake eel provides further camouflage, mimicking the sponges that live nearby. 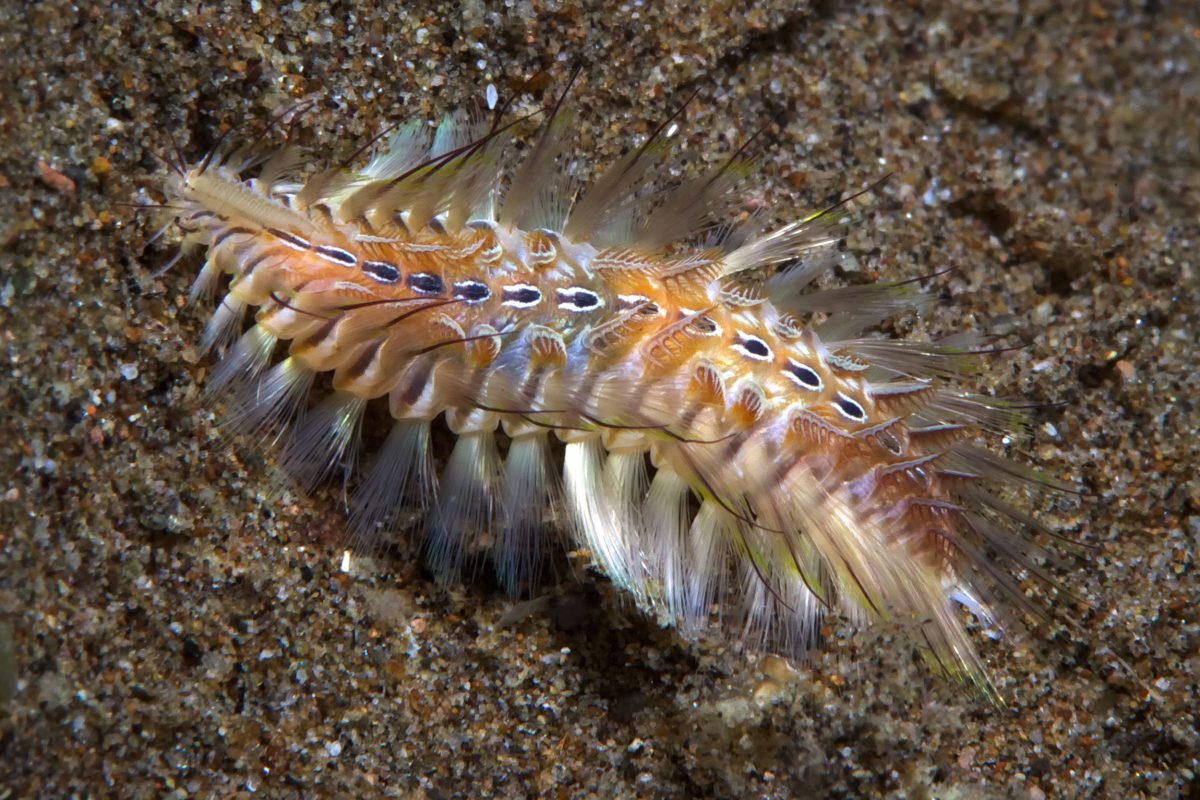 Despite its conspicuous appearance in the open sandy habitat, predators still avoid this polychaete worm (Chloeia sp.). Its venomous, detachable bristles are great deterrents, allowing the worm to crawl worry-free across the sand as it scavenges for food. 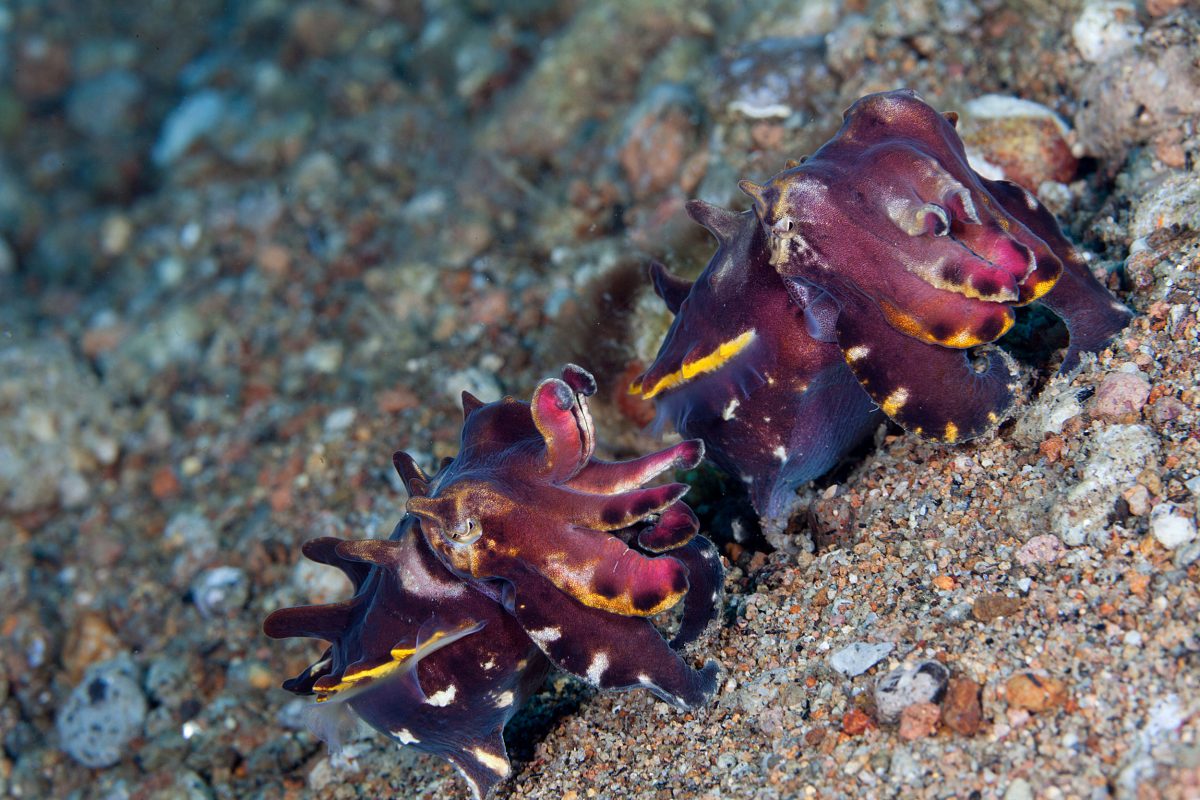 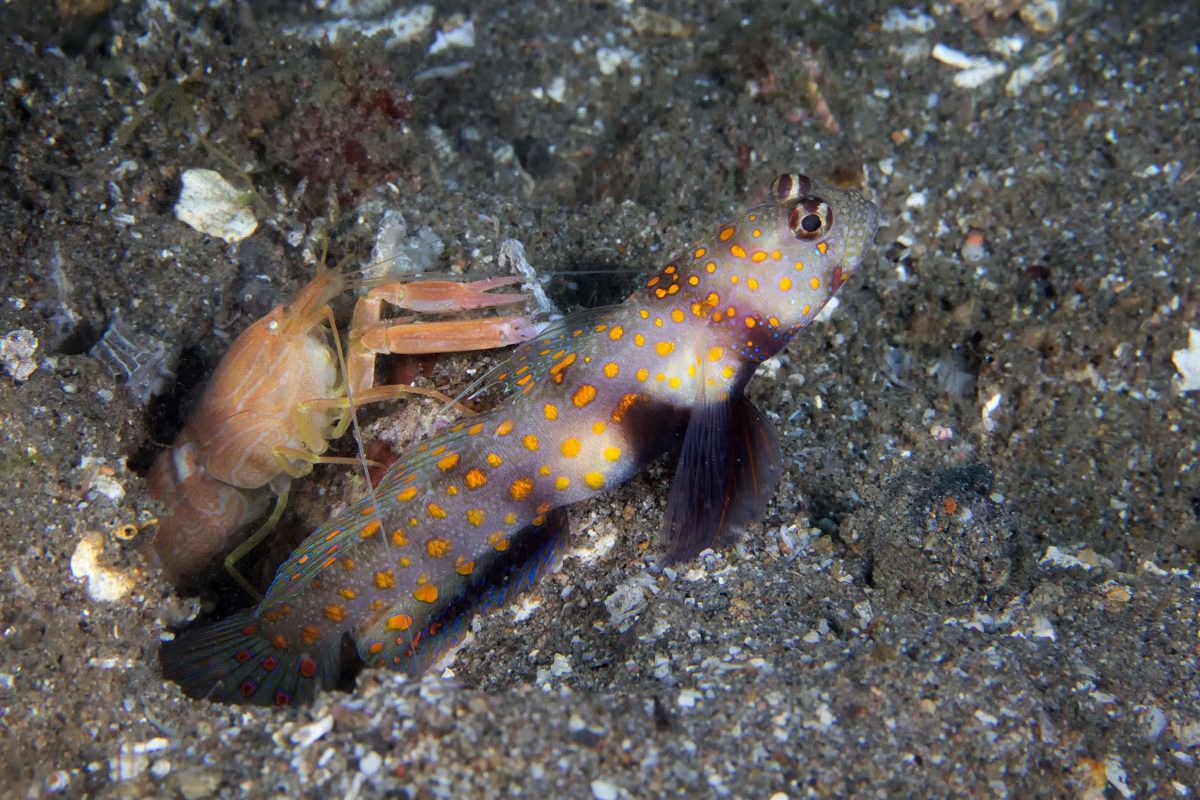 The goby (Amblyeleotris guttata) doesn’t bother with camouflage or venom. Instead it hides in a safe subterranean burrow, dug by a shrimp (Synalpheus sp.) without any help from the fish. 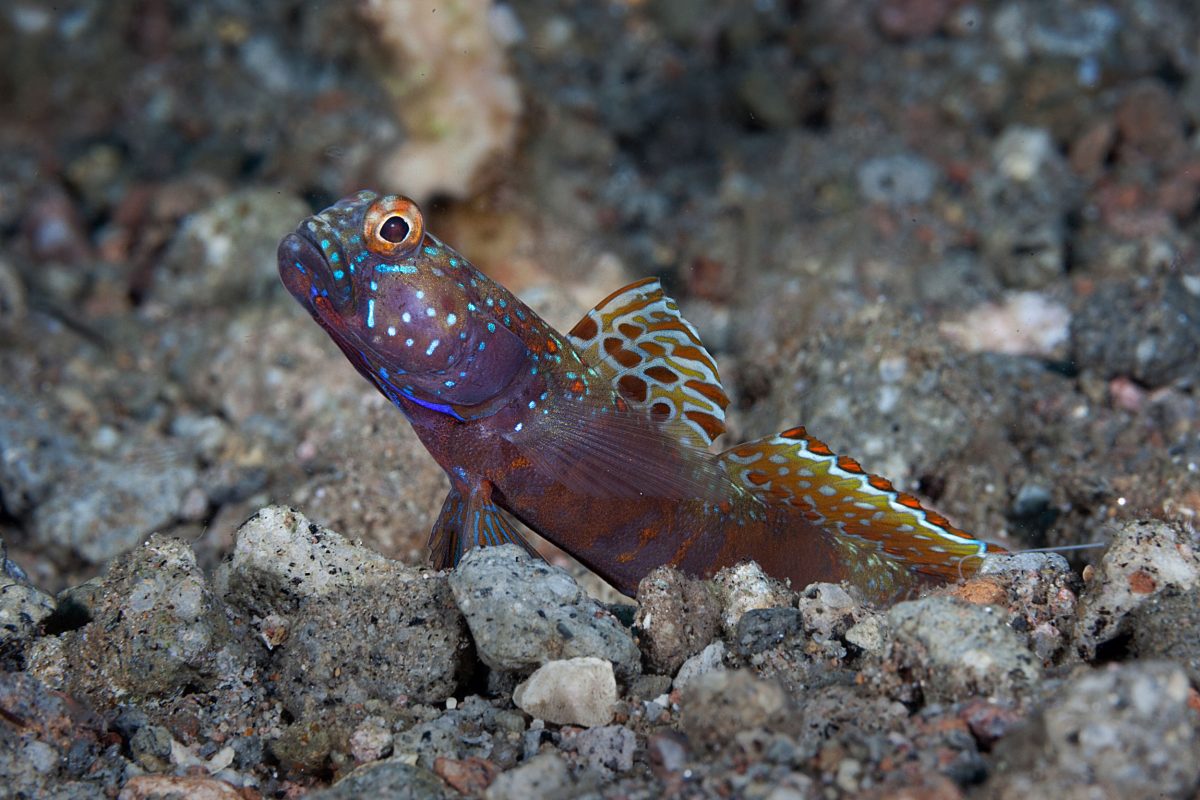 What does the shrimp get in exchange for all its industrious digging? An attentive guard! Look at the concentrated look in the eyes of this goby (Amblyeleotris latifasciata). If it sees a dangerous predator approaching, it wiggles its body, a signal for the shrimp to remain underground. If the predator comes too close, the goby disappears into the burrow as well. The fish’s foraging trips never take it too far from the entrance of the safe burrow. The fish and the crustacean are partners: they trade digging work against guard duty, and they survive on the hostile sandy plains only due to this partnership. 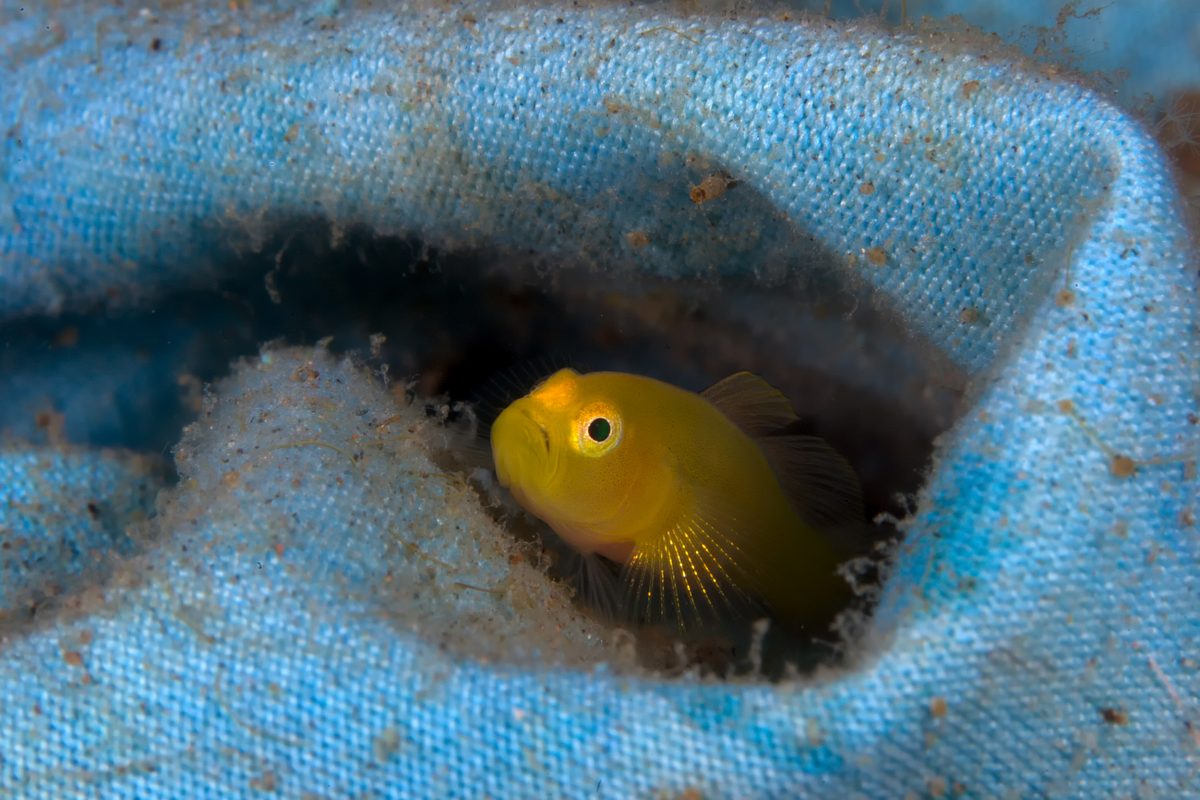 Aside from camouflage, there is another option for surviving in the featureless sand: to use rubbish left by humans as a protective home. Without any venom or spines, and conspicuous with its brilliant yellow color, the tiny goby (Lubricogobius exiguus) seeks out hiding places; this one uses an old T-shirt. On my dives, I have only seen these fish in discarded human textiles drifting over the sand—the Anthropocene seems to have arrived even in the goby’s small world. 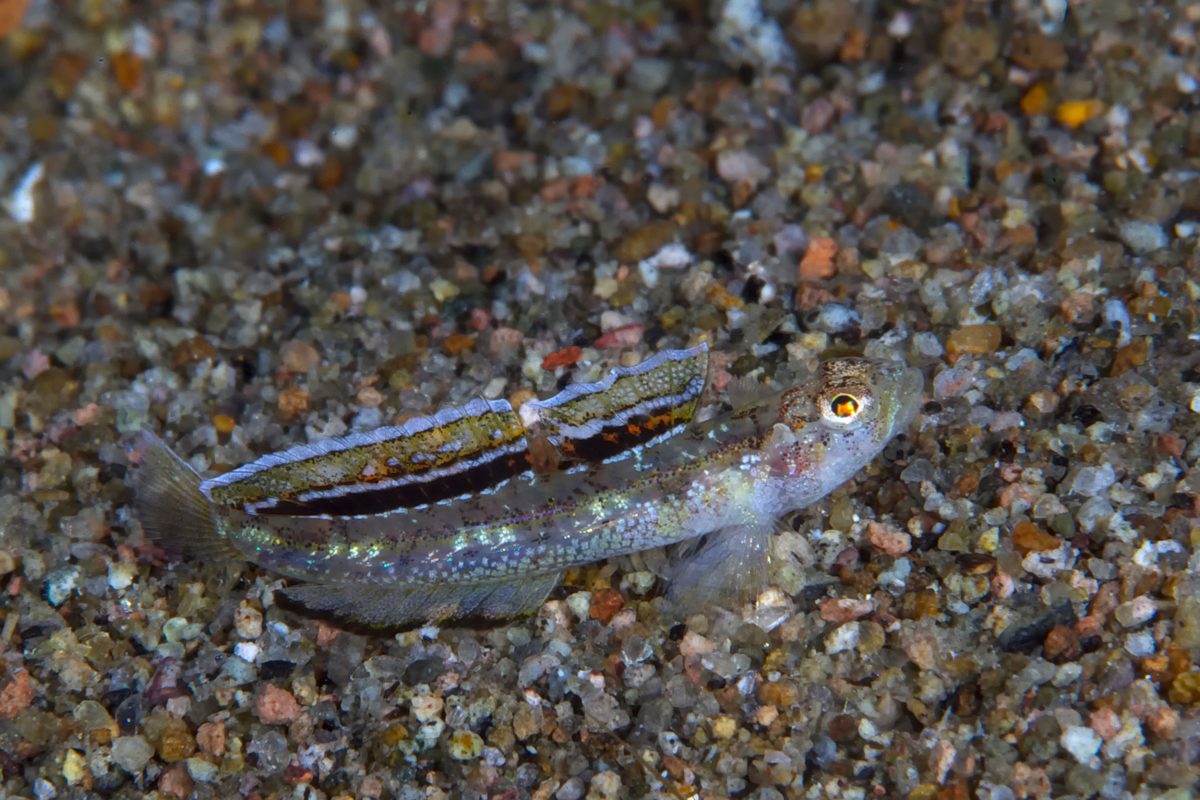 This is a goby belonging to the genus Grallenia, which I found off the coast of the popular diving destination of Dauin, on Negros Island. This fish has only recently been described and named by a fellow fish-loving scientist, Gerry Allen, of Perth, Australia. Since the fish has only been seen a few times, this might be its very first photograph. Another camouflaged sand-dweller, the biology of this two-centimeter-long fish is still mostly unknown.